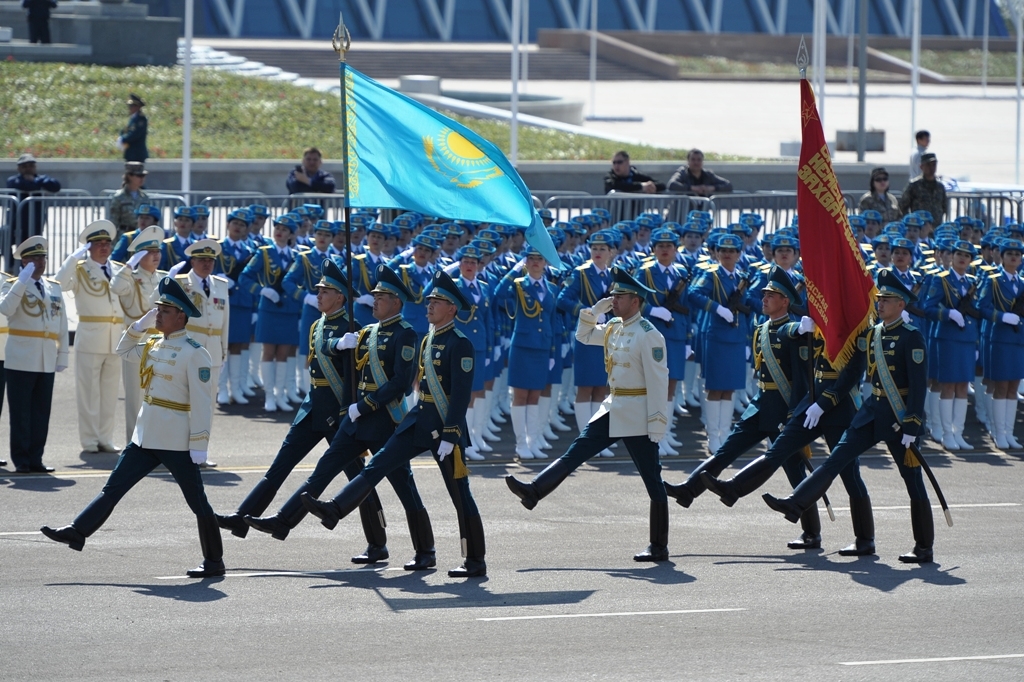 Kazakhstan President Nursultan Nazarbayev has ordered a change in the way his country's soldiers march in a symbolic separation from Russia and the country's Soviet legacy.

In an order issued on Wednesday, Nazarbayev decreed that from now one, Kazakhstan's soldiers will march at a tempo of 95-105 steps per minute, with each step measuring from 60-70 centimeters. Furthermore, "the forward leg should be raised 10-15 centimeters from the ground and placed firmly on the entire sole, the toe held more freely, not extended."

This may seem to be a pretty arcane issue, but there are political implications. Russia and most post-Soviet militaries use the so-called "goose step," which uses a tempo of 120 steps per minute, at a maximum of 80 centimeters, and a straight leg.

When Georgia (in 2007), Estonia (in 2008), and Ukraine (in 2009) abandoned the goose step, it was in the context of those countries' distancing themselves from their Soviet legacies. The Russian newspaper Moskovskiy Komsomolets, reporting on the Estonian move, cited Estonia's defense minister as arguing that "First, Estonians don't like the so-called 'Russian-Prussian' march. Second, and it couldn't do without underlying ideology, of course: today Estonia is striving to escape from its Soviet legacy, and the parade march is considered a 'Soviet influence.' They've decided to return to their 'roots.'"

​Nazarbayev didn't offer any ideological justification for the move, and given his generally cautious public statements, he's unlikely to. But he's been making steady, if subtle moves, to assert his country's independent identity as distinct from a Russian colony or Soviet republic.

The Bug Pit is not a practiced observer of the nuances of military marches, but looking at the video from last year's parade in Moscow commemorating the 70th anniversary of victory in World War II, all the ex-Soviet states that participated -- Armenia, Azerbaijan, Belarus, Kazakhstan, Kyrgyzstan, Tajikistan, and Russia -- all seemed to be using the same march. China's and India's marches were noticeably different. If any Bug Pit readers are versed in the nuances of these marches, and recognize the military after which Kazakhstan might be modeling itself, drop a line.