A nascent comic-book industry fights assumptions that the material is for kids. 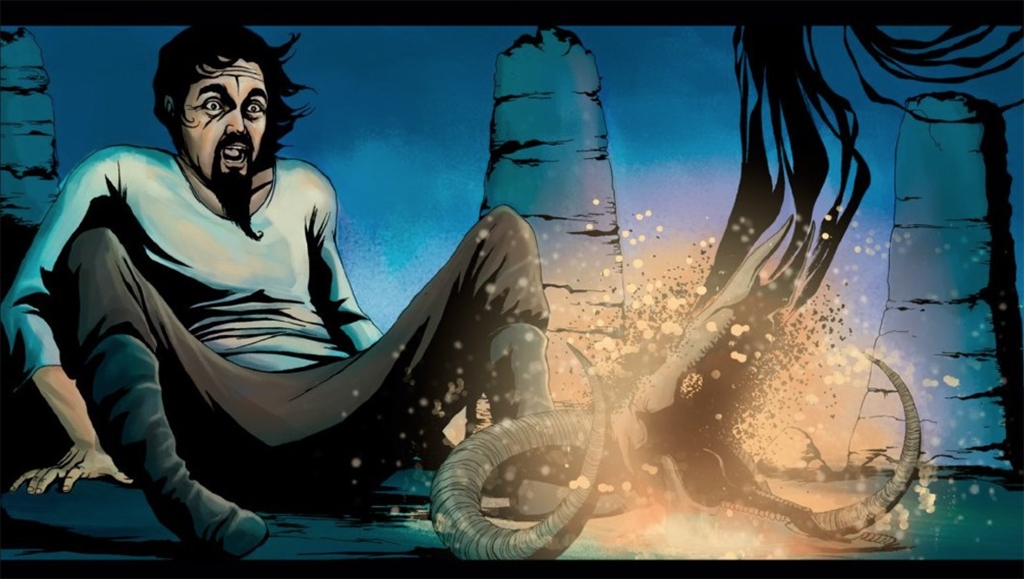 Ermek’s father prays to a Scythian god and the curse is lifted (screenshot from Ermek the Batyr).

Browsers at Crossover, a comic-book store in Almaty, sometimes need some nudging.

“Hello there, would you like to look at some Kazakh comics? You’ll like them,” store owner Sabit Bakytzhan tells them.

Superhero comic books are not much of a thing in Kazakhstan. The format is seen as a childish past-time by the uninitiated, but some local artists are trying to shatter that commonplace by penning fashionable tales with a native twist.

Bakytzhan, 25, chose a good spot for Crossover at least.

The store is located in a building on a remodeled street in central Almaty that has been converted from a shabby side-street mostly used for parking into a bustling, tree-lined pedestrian boulevard popular with young parents and amorous couples. Bands belt out songs by Soviet rock legend Viktor Tsoi outside open-air cafes and street artists tout their water-color paintings while rowdy children nearby clamber on the monkey bars.

Despite all the hubbub, footfall at Crossover is lackluster. Shop assistants play board games to pass the time.

“I didn’t open this shop to make money — I did it out of passion,” Bakytzhan told Eurasianet. “I mainly do business producing and selling comics in Russia, where the demand is much higher.”

Preconceptions are a big hurdle to overcome.

“I remember this one father coming into the shop with his teenage son. The boy asked to buy a comic. And his dad said: ‘But this is for little kids, aren’t you ashamed?’ And they ended up not buying anything,” said Bakytzhan.

Crossover’s showcase comic adventure is called Ermek the Batyr, the creation of Madibek Musabekov, a 25-year-old architect by training.

The narrative is set in a time some centuries ago, when “the Kazakh khanate didn’t exist yet” and “the steppe was ruled by Genghis Khan’s descendants.” The mood owes more to the fantasy genre than to modern superheroes as such. Ermek, a batyr, the Kazakh word for warrior, has no special powers or gadgets, but relies instead on his courage and sense of justice.

“I thought long and hard about what a Kazakh superhero should look like. This could only be a batyr and certainly not some mutant in tights and latex, leaping off the roofs of houses — some awkward parody of American heroes. A character like that would not take root in our society,” said Musabekov.

When Ermek’s father abandons his parents for the woman he loves, his family camp is devastated by a raid of murderous pillagers. Angered by the betrayal, his mother casts a spell dooming her son to never have children. In despair, Ermek’s father prays to a Scythian god and the curse is lifted. Ermek, the youngest of three brothers, grows up to become a freedom-loving adventurer who embarks on a journey of discovery.

"Ermek the Batyr has many interesting messages, unlike most modern comic books, where the focus is on the plot and actions and all kinds of ka-pow ka-pow and kaboom,” he said, mimicking the standard comic sound effects for shooting and explosions.

Another company, Khan Comics, has seemingly had more success tapping the domestic market by exploiting the hunger for Kazakh-language content.

“If we produce stuff in Russian, we are competing with Marvel and DC,” said Khan Comics founder Orazkhan Zhakup. “But for people who speak in Kazakh, we are the only player on the market.”

Zhakup, like his counterparts over at Crossover, got into comics when he was a kid. He created his first magazine in the early 2000s but finally quit his job in 2010 to devote himself to comics full-time.

“I am already 37 years old but I am just a grown-up kid,” he said. “A few years ago, I began really getting into cinema, writing scripts, storyboarding, lighting and so on. And it is in that spirit that I now write stories for comic books.”

Zhakup's slickest project to date is a series titled Orda, set in a post-apocalypse Kazakhstan that feels like blend of Mad Max and the work of celebrated French cartoonist Jean Giraud, who is best known by the pseudonym Moebius. The theme is a pointed departure from the kind of content that predominates among domestic animators.

“When we first started making comics, the idea was to see our own culture reflected in there. To have batyrs and so on. But now we have grown away from it a little and we are looking for new approaches,” Zhakup said.

One issue of Orda has been released to date, but Zhakup said material for another five issues are in the can and he is deciding how best to put them onto the market.

As of now, Khan Comics has produced around 50 of its own comic books. Many have been tailor-made as part of a government program to popularize use of the Kazakh language. Zhakup also serves spouses-to-be looking to memorialize their love story in a comic form.

Despite all the efforts of local talent, the imported material has an undeniable edge. Yury Volodin, a 14-year-old Crossover customer from Almaty, for example, is a Marvel devotee. His favorite is Iron Man, the alter ego of billionaire scientist Tony Stark.

“As far as I am concerned, he is the coolest superhero, because he is modern, cool and has all kinds of modern technology,” Volodin told Eurasianet.

One hiccup for local artists, as education expert Saule Kalikova explained, is that Kazakhstan has no real culture of comic books.

"In the Soviet Union, there were practically no comic books. We watched cartoons. And as adults, we instill the next generation with our own culture and habits,” said Kalikova, who works at the Soros Foundation-Kazakhstan.

Kazakh society, said Kalikova, is still quite conservative in its tastes, be it in cultural fare or food.

Zhakup says this is changing, however.

“In the last couple of years, the situation has changed. Children that grew up with comics have now become adults and that whole scene is shifting really radically,” he said.

The limitations of the local market have generated creative thinking about how to squeeze a profit out of the art-form.

Khan Comics has sold the rights to one of its series, Yerketai, which features the escapades of its eponymous hero, to China. The stories have already been translated into Chinese.

“Comics is just the start. After that come the toys and then films and animations,” Zhakup said.

And since January, an English translation of Ermek the Batyr has been available for sale internationally through a website called comiXology, which belongs to Seattle-based internet retail behemoth Amazon.

“It is a shame that Ermek the Batyr is more popular abroad than he is in my native Kazakhstan, where they seem to prefer marveling at foreign superheroes instead of developing their own,” said Musabekov.