Echoes of war drowned out talk of peace. 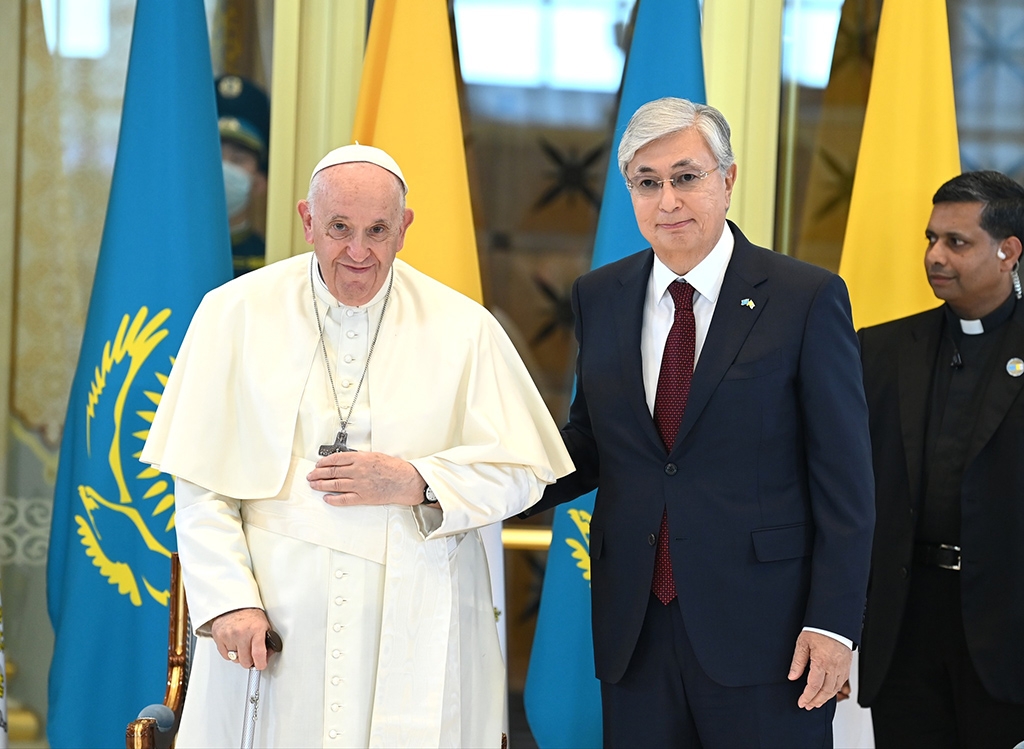 Kazakhstan conceived the Congress of Leaders of World and Traditional Religions, now in its seventh edition, as a platform for conciliation and dialogue.

But when faith leaders from all over the world, including the pope, assembled on September 14 in the capital of Kazakhstan, Nur-Sultan, thoughts of war were front and center.

Far from serving as an opportunity for building bridges, the congress once more laid bare the inability, and even unwillingness, of religious institutions to sway the wills of governments determined to shun diplomacy, compromise and negotiations in favor of violence.

The war launched by Russia against Ukraine in February was referenced only obliquely in speeches at the Nur-Sultan congress, but the allusions were nonetheless clear.

President Kassym-Jomart Tokayev set the tone with a plaintive plea for a departure from the status quo.

“Kazakhstan has always favored solving any disputes exclusively at the negotiating table in the spirit of the UN Charter. Threats, sanctions, and the use of force do not solve problems. At moments like these we must turn to humanistic ideals. The main custodians of those ideals are, of course, traditional religions,” Tokayev said.

Critics of this sentiment would argue, though, that Tokayev was speaking as much from sincerely held principle as from diplomatic pragmatism. Kazakhstan is a close economic and security partner to Russia, making the idea of it robustly criticizing the war in Ukraine all but impossible. Nur-Sultan has at the same time sought to dispel any impression it endorses the Kremlin’s bloody actions.

In his address to the congress, Pope Francis acknowledged the failure of religious leaders to advance the cause of global peace.

“We look around us and see our time still plagued by the scourge of war, by a climate of hostility and confrontation, by an inability to step back and hold out a hand to the other,” he said.

In closing remarks at open-air mass in Nur-Sultan later that day, the pope nevertheless appealed for a return to negotiations, in the conflict between Russia and Ukraine, as well as the one that flared again over recent days between Armenia and Azerbaijan.

“The one solution is peace and the only way to arrive at peace is through dialogue,” he told a gathering of thousands of congregants who had traveled to the city from all over Kazakhstan.

Critics of the Vatican have previously complained that the pope’s reluctance to take a stronger and clearer position on the Russian invasion of Ukraine have undermined his credibility as a force for moral clarity. Kyiv’s irritation came to the surface in August, following the car bomb killing of Daria Dugina, the activist daughter of prominent Russian national-chauvinist polemicist Alexander Dugin. Moscow accused Ukrainian agents of being behind the killing without providing any credible evidence.

Francis spoke in a weekly general audience after that killing about “the madness of war.”

“I think of that poor girl blown up by a bomb under the seat of her car in Moscow,” he said. “Innocents pay the price of war, innocents.”

This sparked protests from Ukraine’s Foreign Ministry, which summoned the Vatican’s envoy to Kyiv to convey its displeasure. Ukraine’s ambassador to the Holy See wrote on Facebook of his dismay.

“Today’s speech of [the] Pope was disappointing and made me think about many things,” he wrote. “[One] can’t speak in the same categories about [the] aggressor and victim, [the] rapist and raped. How [is it] possible to mention one of [the] ideologists of [Russian] imperialism as [an] innocent victim?”

In the months ahead of the Nur-Sultan congress, there had been faint hopes the occasion might serve as an opportunity for Francis to meet with the Patriarch Kirill, the primate of the Russian Orthodox Church. That prospect was dashed in late August, when the Moscow Patriarchate announced that Kirill would not be traveling to Kazakhstan. No reason was provided for the snub.

The Russian Orthodox Church was instead represented by the head of its foreign relations department, the Metropolitan Anthony of Volokolamsk, who read out a written note from Kirill to the congress. The speech brimmed with portents of doom.

"Humanity is going through one of the most difficult periods of modern history,” Kirill stated. “The path of dictatorship, competition and confrontation chosen by some rulers of this world is leading mankind to destruction.”

Coming from anybody other than the head of the Moscow Patriarchate, those words might appear ambiguous. The Russian church has been clear in its endorsement of President Vladimir Putin’s military adventure in Ukraine, however. In a March 6 sermon at the Cathedral of Christ the Savior in Moscow, Kirill framed what the Kremlin has described euphemistically as a “special military operation” as a just action.

"Eight years in the Donbass [in eastern Ukraine] have seen the suppression and extermination of a people. Eight years of suffering, and the whole world is silent,” he said.

The implication that the war in Ukraine was instigated and rendered inevitable by intolerance shown toward ethnic Russians was again advanced in Nur-Sultan.

“Increasingly, we hear and read in public space words filled with hatred towards entire peoples, cultures and religions," Kirill was cited as saying.

That the Nur-Sultan congress has unfolded against a backdrop of such rancor may prove something of a disappointment for Tokayev, who penned an op-ed ahead of the event casting his country as a space for international mediation.

“We invite the parties to any crisis to come to the table in Kazakhstan for dialogue. Violence and hatred are not what God wants,” he wrote in article published on the website of the National Interest magazine.