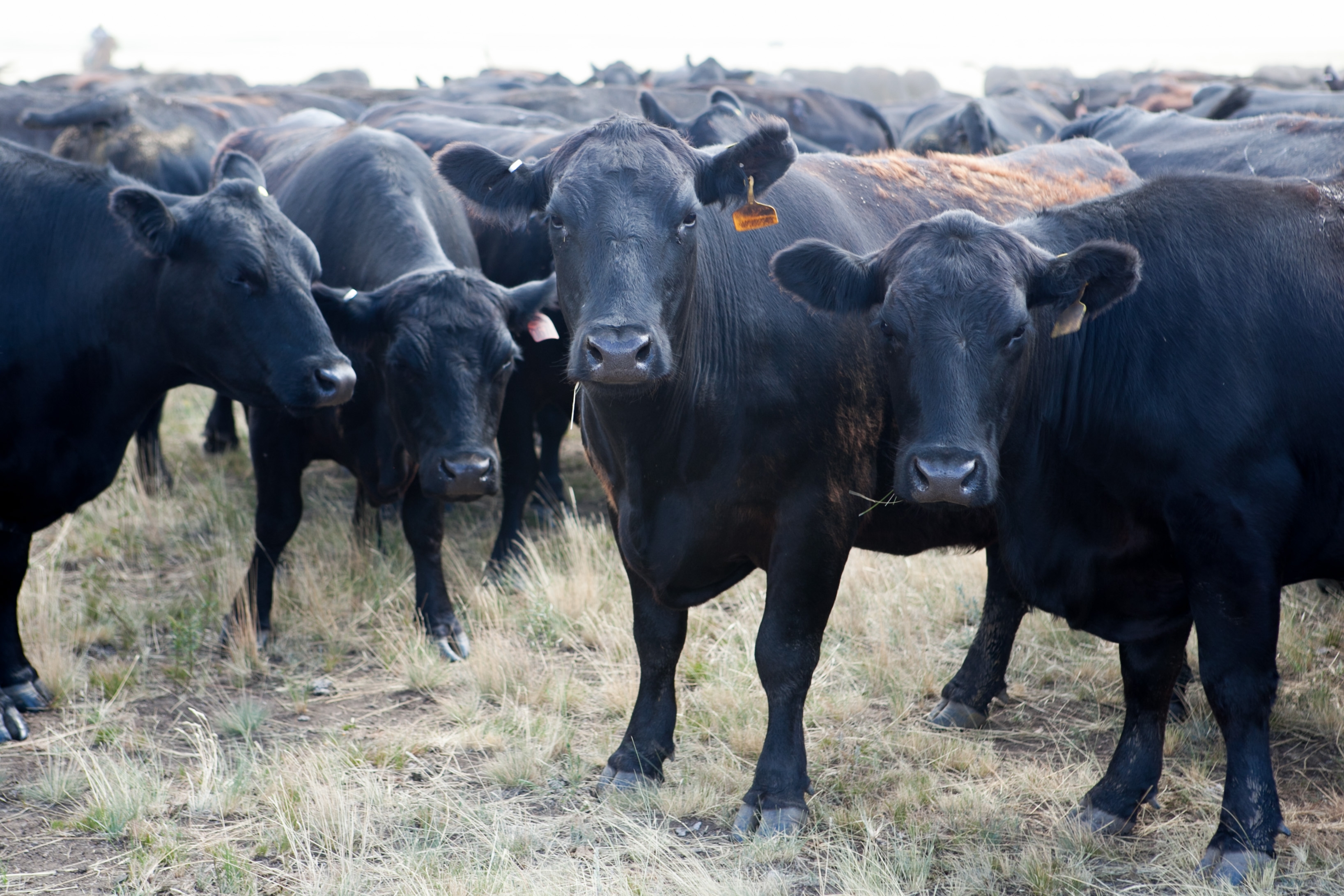 Kazbeef’s Black Angus cows roam their pasture in Akmola Region north of Astana. Many of the mothers flew to Kazakhstan from North Dakota aboard Boeing 747s. (Photo: David Trilling)

Beibit Yerubayev stays up at night thinking about vaccinations and artificial insemination. The cowboy with an MBA says Kazakhstan’s beef industry was a mess when he entered it four years ago, plagued by small, disease-addled herds and no vaccines. “I had to smuggle them in every time I traveled,” he says.

Today, Yerubayev is running the flagship business in Kazakhstan’s $1 billion attempt to revive its beef industry, with thousands of American cows (and lots of semen) flown in to improve the local gene pool. While state officials believe that export potential – recently boosted by Russia’s ban on Western produce – will justify the risk, the enterprise will face plenty of hurdles: from the inefficiencies of state-run capitalism to the hazards of Kazakhstan’s close economic ties with Russia.

A proper Kazakh table groans with meat. While horse might have a special place in the popular imagination, Kazakhs these days mostly consume beef—whether boiled, grilled or cured. It’s generally tough, though, leftovers from the dairy industry. And it does not satisfy the increasingly discerning palate in this oil-rich country, where the growing middle class sees a well-marbled filet mignon as a rite of passage into the global elite.

Yerubayev, Kazakhstan’s former trade representative in North Dakota, aims to satisfy this high-end demand, but also to put juicy, “American-style” steaks on tables in neighboring Russia. The 34-year-old founded Kazbeef with a $50 million low-interest, long-term government loan in 2010, and has built a 9,000-head heard so far, his strapping steers dwarfing the bony bovines normally seen here.

New genes are key to rebuilding the industry. Since 2010, the state-run program has flown in 50,000 Black Angus and Hereford cows (chosen to survive temperatures that swing between -35 and 35 Celsius) to build mother herds managed by about a dozen companies around Kazakhstan. By supporting large farms, authorities can ensure animals are vaccinated and control for quality, Deputy Agriculture Minister Gulmira Isayeva told EurasiaNet.org at her office in Astana.

“Why did we choose beef? Because there is international demand,” she says. “Our dream is that Kazakh meat will become a world famous brand. The first step is to export our beef to the Russian market because the Customs Union [of Russia, Kazakhstan and Belarus] provides good terms for our businesses.”

Now the program’s first test has come. Moscow has banned produce, including meat, from many Western countries in response to sanctions over its support for rebels in Ukraine. This should theoretically raise demand for Kazakh beef and Yerubayev believes the bans will more generally “play a key role developing new industries” in Kazakhstan.

On a recent daylong tour of his 2,000-square-kilometer ranch, Yerubayev’s phone rang constantly with calls from interested buyers, some of them in Russia. He hails the Moscow-led Customs Union for expanding his market. Though he is excited that Kazakhs are discovering the joys of premium-grade tenderloin, it is the Russian market that could make or break his company.

Kazakhstan exported 300 metric tons of beef to Russia in 2013. This year ranchers are on track to export 10,000 tons. The Agriculture Ministry hopes exports grow to 180,000 tons by 2020, yet a critic of the program, the head of a meat producers’ union, says those quotas will be hard to achieve.

By the late Soviet period, Kazakhstan was producing 600,000 tons of meat annually, mostly lamb, for consumption in Russia and other Soviet republics, says Isayeva, the deputy minister. Quality was an afterthought; 98 percent of cows were bred for dairy and slaughtered only when too old to give milk.

When state-run farms broke up at the fall of the Soviet Union, “everyone started killing anything that moved,” says Yerubayev. Within eight years of independence, the cattle population fell from 9.5 million to 4 million. In 2011, the IMF said Kazakhstan’s agricultural sector accounted for more than a quarter of employment but only 6 percent of GDP.

The process of reviving the industry is capital-intensive. Kazbeef, for example, sources all its purebreds from Global Beef in North Dakota. The cows arrive packed, 180 at a time, in chartered Boeing 747s. The flight over runs between $360,000 and $580,000, says Global Beef co-owner Daniel Price.

When the steaks land on tables in Kazakhstan, they are half the price of imported cuts, but still beyond most Kazakhs’ means. That invites a number of questions about how the oil-rich government spends money: the divide between rich and poor seems to be growing, and has been blamed for social unrest; and cronyism has featured in many lucrative government initiatives.

Nonetheless, Russia’s sudden import bans have energized agricultural officials across Central Asia. “Kazakhstan sees an opportunity to increase the supply of agricultural products to Russia,” such as beef, lamb, pork, vegetables and melons, says Amina Akhmetzhanova of the Agriculture Ministry’s Department of Livestock Production and Processing. Russian officials have called on former Soviet states to up production as the price of staples, including beef, rises following the ban.

The Russian food ban has debatable benefits, however, for Kazakhstan. While Kazakhstan stands to gain by upping its own exports, the economic slowdown in Russia, exacerbated by Western sanctions, threatens to pull down Kazakhstan as well, officials fear. Trade turnover between the two plummeted 24 percent in the first six months of this year, according to Kazakhstan’s statistics agency. Moreover, a sudden surge of food exports could spark price increases at home.

Yerubayev sees the bans as a chance to prove himself. But he knows he must not rush into anything, like big deals that would slash his herd, and must focus instead on providing his cows the attention they need. “You cannot cheat on cattle. If you cheat on them, they’ll let you know,” he says.