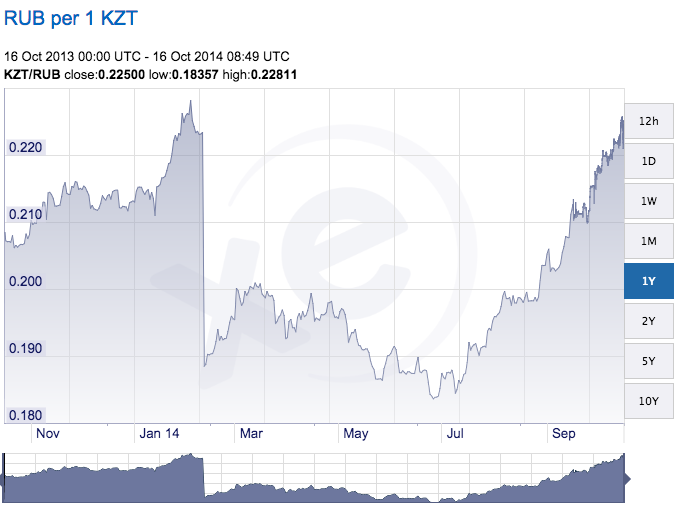 The ruble vs the tenge over the last 12 months. The sharp change in February indicates the first tenge devaluation. Since then, the ruble has continued to slide, again putting pressure on the tenge. xe.com.

As the price of oil falls, and as Russia’s Central Bank struggles to keep the ruble from hitting a new record low each day, Kazakhstan’s currency is facing pressure on two fronts. The major oil producer, whose economy is tightly linked to Russia’s, already sharply devalued the tenge once this year. But facing these new challenges, can the Kazakh National Bank hold its currency stable? And can Kazakhstan keep its books balanced?

Higher output and weaker global demand have pushed the price for benchmark Brent crude to $83 per barrel, its lowest in four years, down 27 percent since June. Oil, Kazakhstan’s chief export, is still above the government’s fiscal breakeven point of $65.5 per barrel, as calculated by the IMF. But it is below $90.6, where Kazakhstan faces a balance of payments deficit that puts further downward pressure on the currency. Moreover, trade with Russia is down 22 percent this year.

Kazakhstan’s “tenge weakened in forward markets last week, responding to a drop in the price of oil and sliding ruble,” Halyk Finance, an Almaty-based investment bank, said in an October 13 note. “The weakening of the Russian ruble and falling oil prices are the main fundamental reasons of the tenge weakening in forward markets.”

Russia is Kazakhstan’s main trading partner. And because of the falling price of oil, and the effect of sanctions the West has imposed on Moscow for meddling in Ukraine, the Russian currency has fallen nearly 20 percent this year. That has put the ruble-tenge exchange rate back where it was just before the tenge devaluation (see chart).

So the tenge is facing the same pressures that forced the National Bank to let it slide 19 percent overnight in February.

At the February devaluation, officials ended the tenge’s partial peg to the ruble. Yet expectations that a peg persists “have become entrenched,” said Sabit Khakimzhanov, head of research at Halyk Finance, helping foster stubborn rumors another devaluation is imminent whenever the ruble hits a new low.

Despite all these burdens, the tenge has doggedly stayed between 181 and 182 to the dollar in recent weeks, even as the National Bank does not appear to intervene. What is going on?

In recent days, someone has been buying up to $200 million worth of tenge daily to keep the currency at this level, says Khakimzhanov. Observers believe the National Bank has been making the buys, which would be logical, but the Bank is mum.

“The problem is we don’t see the [Bank’s] reserves going down. Our estimates of daily interventions no longer add up to the changes in the reserves, even approximately,” Khakimzhanov told EurasiaNet.org. “The actions of the [National Bank] have been difficult to rationalize based on standard monetary policy considerations.”

The National Bank did not respond to a request for comment on October 16.

Even blessed by a mystery buyer with a fetish for tenge, inevitably some are asking what Kazakhstan learned from the 2008-2009 financial crisis, which showed Kazakhstan’s undiversified economy badly dependent on the price of oil. Today revenues from oil-related taxes and oil sales contribute 56 percent to the budget, according to Halyk Finance.

Kazakhstan’s economic growth slowed below government expectations to 4 percent for the first nine months this year, official data this week showed. "To some extent it is linked to a downward trend in industrial output caused by crisis phenomena in the Russian Federation due to the sanctions, which in turn led to falling demand for Kazakhstan's exports,” Reuters quoted Alikhan Smailov, head of the National Economy Ministry's statistics committee, as saying on October 14. The World Bank expects Kazakhstan’s overall growth to hit 4.3 percent this year, down from 6 percent last year, the lowest rate in five years.

Oil output has also slipped. And this month officials conceded the long-delayed Kashagan oil field would not come on-stream until 2016 at the earliest.

Officials admit the falling price of oil is painful, but have promised not to cut social spending. One way to keep that promise is to let the tenge slide, though a second devaluation in a year would undermine faith in Kazakhstan’s entire financial system.

But a furtive tenge buyer is a mixed blessing. Sure the tenge has thus far maintained its value, but no one knows when the anonymous buyer will change the rules or run out of dollars.