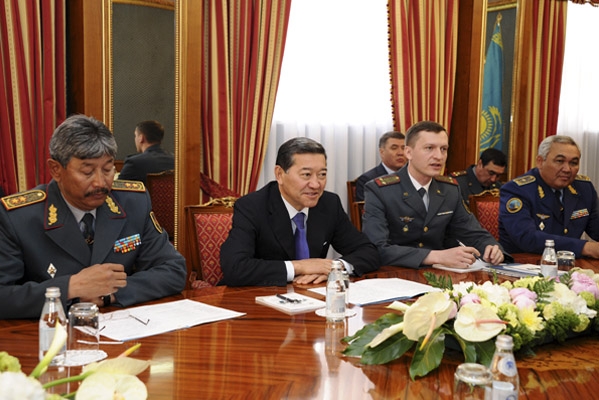 Kazakhstan President Nursultan Nazarbayev has removed the country's defense minister Serik Akhmetov after only six months in service, replacing him with the current mayor of Astana, Imangali Tasmagambetov. Nazarbayev gave no explanation for the move, but analysts and inside sources seem to suggest two explanations for the reshuffle: Akhmetov's connection to a corruption scandal and Tasmagambetov's ability to steer the military in what is becoming a difficult time.

An analysis on the Kazakhstan news site TengriNews noted that "The fighting in Ukraine has demonstrated the inadequacy of the Ukrainian army, which led the Kazakh leaders to seriously examine the state of its own army.... Being an apt economic manager, Tasmagambetov was chosen to solve the problems in the Ministry [of Defense]." It quotes political analyst Aidos Sarym: “Apparently, there is a need for a person with strong charisma and good organisational abilities to manage the army. Now the army is experiencing very unpleasant processes that suggest that our defenses are very low. It is clear that this very large corporation needs efficient people to deal with it.” Similar theories were promulgated by a number of other experts.

"The appointment of Tasmagambetov is likely connected with the serious geopolitical changes which are taking place in the post-Soviet space this year with respect to the events in Ukraine," Kazakhstan analyst Dosym Satpayev told Russian newspaper Nezavisimaya Gazeta. "In a recent meeting of the Security Council Nazarbayev commanded all the security structures to strengthen national security. Of course, without the armed forces this isn't possible."

But it's unclear what Akhmetov's shortcomings on that front were, and he was appointed only in April of this year, when Kazakhstan's security was not too much more difficult than it is now. Somewhat more convincing is the theory that he was too close to a corruption scandal involving top officials in the Karaganda region. Russian Central Asia expert Arkady Dubnov told Nezavisimaya Gazeta: "Akhmetov is in a difficult position. Responsibility for former Karaganda governor Baruzhan Adbishev, who is under investigation for corruption, has been pinned on him. Adbishev is considered to be a protege of Akhmetov since he climbed the career ladder when Akhmetov was prime minister."

Of course those aren't mutually exclusive explanations, and an "informed source close to the government" told kursiv.kz that both were reasons.

If Akhmetov is going to get a new post, it hasn't been announced yet. Anyway, Kazakhstan has cycled through a number of defense ministers in its short history and its defense and military policy does not seem to depend too heavily on which individual is in the defense minister's seat. We'll see if that remains true after this shakeup.