Eyewitnesses told Eurasianet that mobs of Kazakhs attacked the village from two sides, armed with stones, metal bars and firearms. 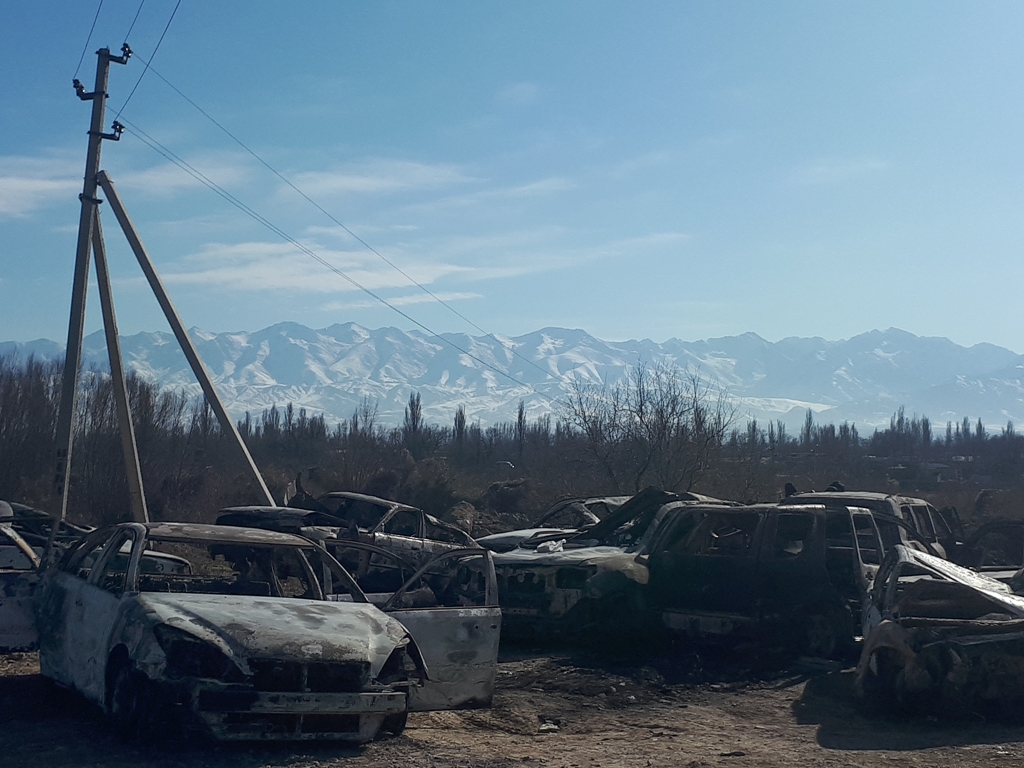 In a house down a rutted track in the village of Masanchi, in southeastern Kazakhstan, a family was mourning its son.

“I have lost my son. I have only one son,” said the head of the household, his face contorted with grief, as well-wishers streamed through to pay their respects.

A toddler emerged chuckling from the kitchen, unaware that his father was one of the victims of the spasm of bloodshed inflicted upon the ethnic Dungan community over many hours on the night of February 7. The latest death tally accounts for 10 lives lost.

“I am barely holding myself together. My nerves are giving way,” the father of the deceased told Eurasianet as the sun set on the traumatized village of Masanchi.

A few hours earlier, the man had buried his son, who died after sustaining a gunshot wound in the back.

The people who spoke to Eurasianet for this story did so on condition of anonymity as they feared for their safety amid the still-uncertain situation.

Masanchi is a picture of devastation. In the aftermath of the unrest, shocked residents milled around, surveying the charred remains of their homes and businesses as municipal workers in orange vests swept up debris and police in riot gear patrolled the streets.

Intact among the wreckage stood the Kairat wholesale store, whose name proclaimed it as a Kazakh-owned business in this village populated almost entirely by Dungans, Mandarin-speaking Muslims of Chinese ancestry who fled to Central Asia 140 years ago during an uprising in China.

The government has characterized the violence that gripped Masanchi and other nearby villages not as an ethnic clash but rather as a mass brawl that began over a dispute about who would give way on a road.

That is not how residents of Masanchi recall the events. 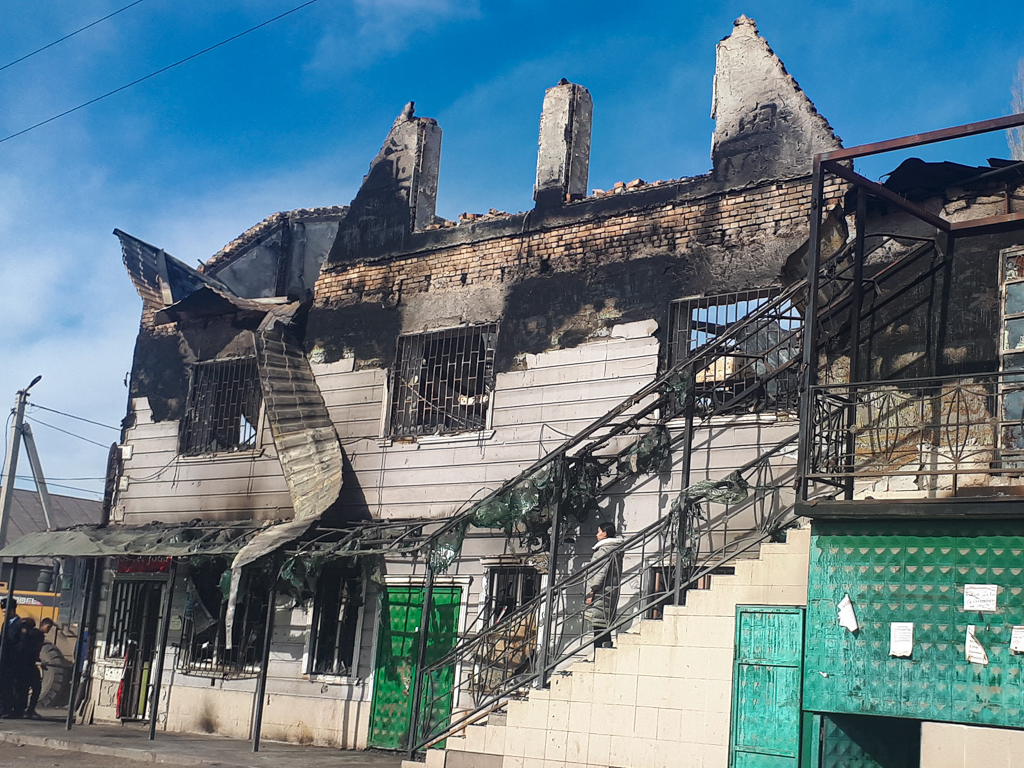 Eyewitnesses told Eurasianet that mobs of Kazakhs attacked the village from two sides, armed with stones, metal bars and firearms. Mobs went on the rampage, beating and shooting Dungans and hurling Molotov cocktails into houses and shops, while sparing the few Kazakh-owned buildings, according to those testimonies.

Locals in both communities agreed that the spark on the day was a rumor that Dungans had beaten up an old Kazakh man. While most Kazakhs in the area insisted this story was true, Dungans expressed doubts.

Video footage that circulated of Dungans having an altercation with Kazakh police in the village of Sortobe, which is a short drive from Masanchi, also inflamed passions. The government says incendiary messages that circulated widely on social media and messaging apps only served to worsen tempers.

At least 170 people were injured, including two police who sustained gunshot wounds. Fourteen remain in a serious condition.

Getting to the root of the violence is complicated by the state-enforced taboo around the discussion of ethnic tensions, whose existence authorities typically seek to downplay or deny outright. The official line, that the 100 or so ethnic groups that occupy Kazakhstan live in peace and accord, is a central tenet of the ideology that Nursultan Nazarbayev, who resigned as president last year, formulated over his three-decade rule.

With a community of 72,000, the Dungans make up just 0.4 percent of the overall population. Most of them live in the southern district of Kordai. As the chaos escalated, thousands of Dungans from Masanchi and other villages sought refuge in nearby Kyrgyzstan.

Some Dungans interviewed by Eurasianet, clearly cognizant of the sensitivities around the ethnic question, appeared to dissemble when talking about the causes of the unrest and spoke vaguely about the involvement of unidentified “third forces.”

Others hinted at something more sinister, suggesting that what had happened was not random but somehow premeditated and organized.

An eyewitness from the village of Bular Batyr told Eurasianet that police stood by as assailants rampaged through, stealing cars and running them into the crowd.

Law-enforcement structures have said local officers were simply overwhelmed and powerless to intervene until reinforcements arrived from the nearest big city, Almaty, about four hours away by car.

The dark and confusion made it hard to identify the attackers, but many Dungans are convinced most were outsiders who came not only from neighboring villages but from far and wide.

“People came from all over Kazakhstan to trash things and kill people,” said one young man, a business studies student. “There were strangers, and everything was prepared.”

It is impossible as yet to verify such claims, which others deem unlikely, but shock and fear have sent the rumor mill into overdrive.

The authorities have named one of the deceased as Darkhan Abdrakhim, a Kazakh present in a Dungan village at the time of his death. All the other fatalities appear to have been Dungans.

The Kazakh version of events is difficult to pin down. In the Kazakh-populated village of Karakemer, which can be reached from Masanchi in a brief stroll across a river, most people queried claimed complete ignorance about what had happened. A number of residents insisted they did not hear the gunshots or notice the rows of burning buildings just one kilometer away.

Others were more blunt, however. One outspoken Kazakh man told Eurasianet: “What happened is what should have happened.”

“These people, the Dungans, had started to get cocky. This didn’t happen in one day – it has built up over years and years,” he said, without giving his name. “Patience snapped. They got rich, and when people get rich, they start looking down on other people. They started saying to us: ‘Though the land is yours, the power is ours.’”

There is, however, no obvious disparity between Masanchi and Karakemer, both of which exude an air of relative prosperity. Even the Kazakh man complaining about Dungans acknowledged as much as he loaded up the trunk of his expensive jeep outside his large house.

The government has set up a commission headed by deputy prime minister Berdibek Saparbayev to get to the bottom of the violence and punish those responsible, although 47 people arrested in connection with it have now reportedly been freed. Authorities say they have opened 25 criminal case relating to the unrest.

Authorities have promised compensation for bereaved families and property damaged. The tally of destruction now includes 30 homes, 15 businesses and 23 cars.

President Kassym-Jomart Tokayev has ordered the dismissal of the regional police chief, the deputy regional governor and the district governor.

For the victims, this will be too little and too late.

Back in Masanchi, the distraught father of the young man shot dead in the violence was surveying his own well-appointed house, which he had expected to bequeath to his only son.

“Who is this all for?” he asked, gesturing despondently around the courtyard. “I built it for him.”