Kazakhstan's financial capital in lockdown as scores of protesters detained

The Almaty demos were held hours after Tokayev was inaugurated as president. 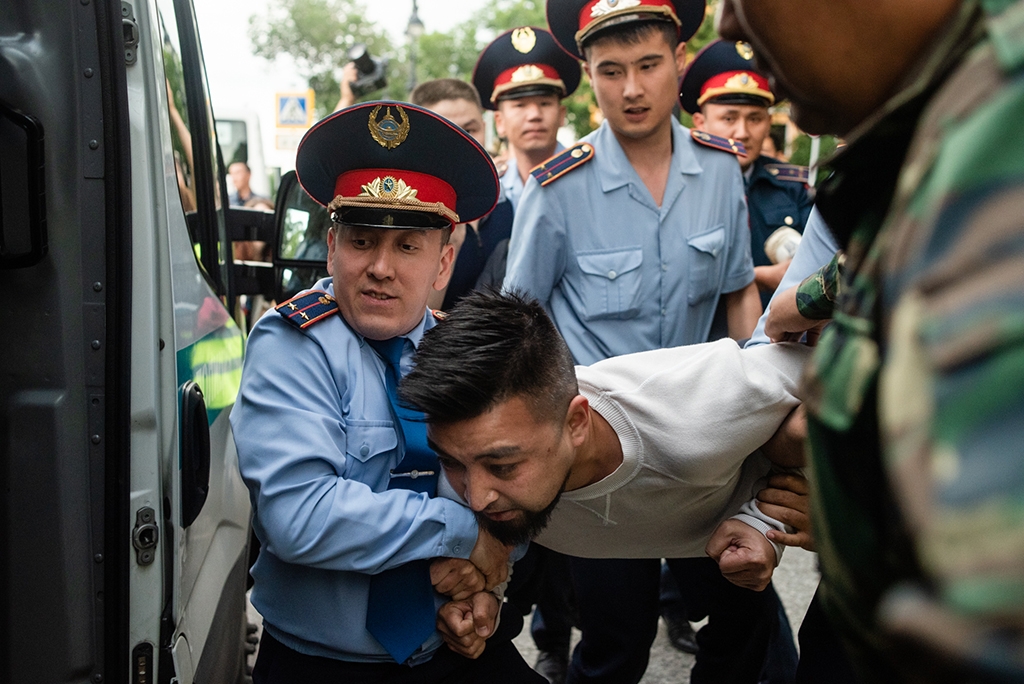 Among those hauled away was prominent activist Dimash Alzhanov, who was observing from the sidelines rather than protesting. As he was being pushed into a paddy wagon, Alzhanov shouted "Oyan Qazaqstan!" ("Wake up, Kazakhstan!"). (All photos Danil Usmanov)

Kassym-Jomart Tokayev’s term as president of Kazakhstan got off to an inauspicious start on inauguration day as police put downtown Almaty in lockdown and detained around 100 protestors.

The city center turned into a ghost town as police lined three thoroughfares and blocked approaches to Astana Square, the scene of protests in recent days and where most arrests were made on June 12, hours after Tokayev was sworn in.

Some offices sent staff home early in case of trouble before the anti-government demonstrations could get underway in the evening.

The McDonald’s at Astana Square stood deserted, illuminated by the flashing lights of police cars parked up outside. Cafes, restaurants, bars and shops were closed on the orders of city hall, according to a coffee shop owner disgruntled at losing a night’s takings on what would normally be a busy evening.

The police turned out in force along a route where a march had been called, but did not materialize. 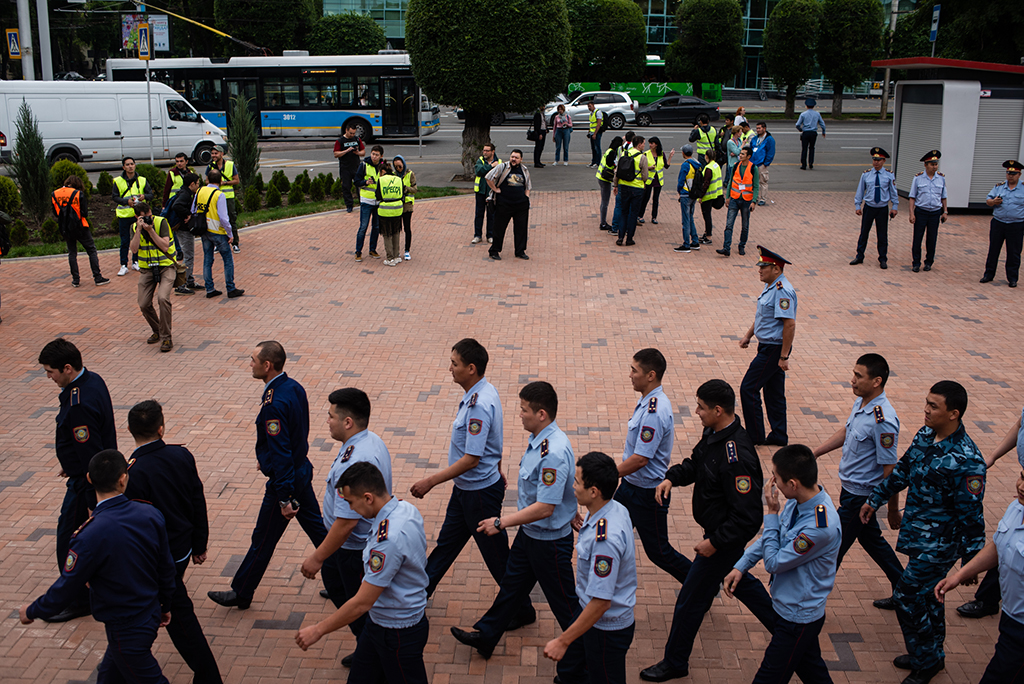 The rally was summoned via social media by Mukhtar Ablyazov, a France-based oligarch and regime foe who has called for post-election protests.

Hundreds have rallied to his call, although since most have been rapidly detained and therefore unable to speak to reporters, it is difficult to establish whether most support Ablyazov or have been drawn by the opportunity to vent general frustrations over political and socioeconomic grievances.

On June 12, anyone suspected of being near Astana Square to protest was summarily detained. Several put up spirited resistance, shouting and scuffling. 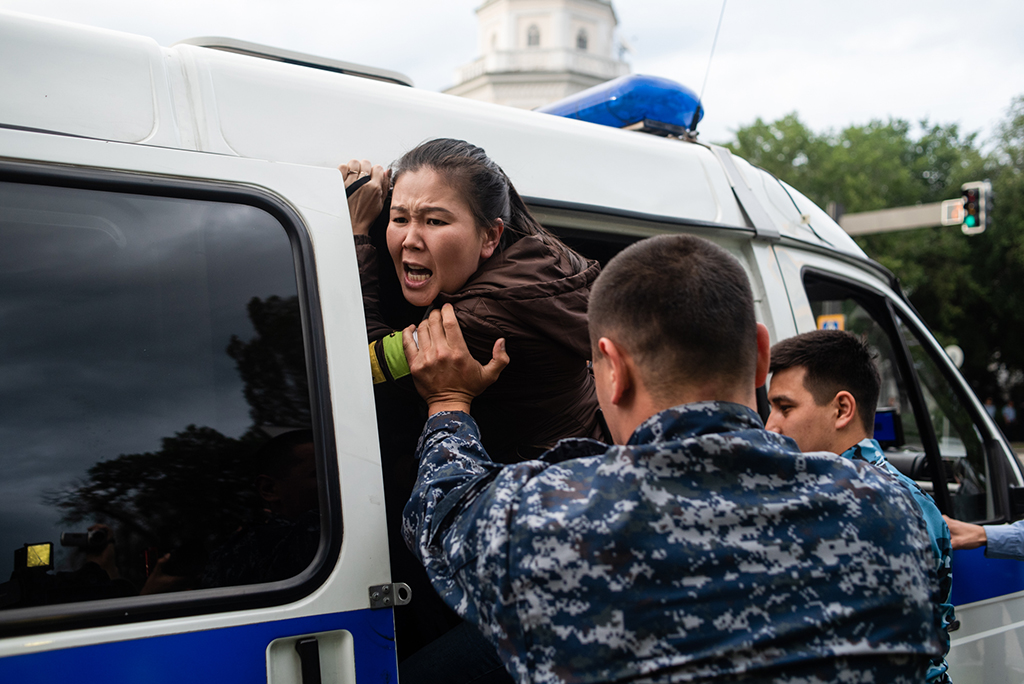 Among those hauled away was Dimash Alzhanov, a founder member of a new movement pushing for political reform, who was observing from the sidelines rather than protesting.

Alzhanov was carried prostate to a paddy wagon shouting “Oyan, Qazaqstan!”, the name of his movement, which means Wake Up, Kazakhstan.

This was his third detention in recent days. He was held while observing a demonstration on June 9 and then again taken into custody the following day while trying to secure the release of detainees. On all occasions he was released without charge.

Officers detained one 30-something woman present with three children, who were left behind and were later collected by their father. 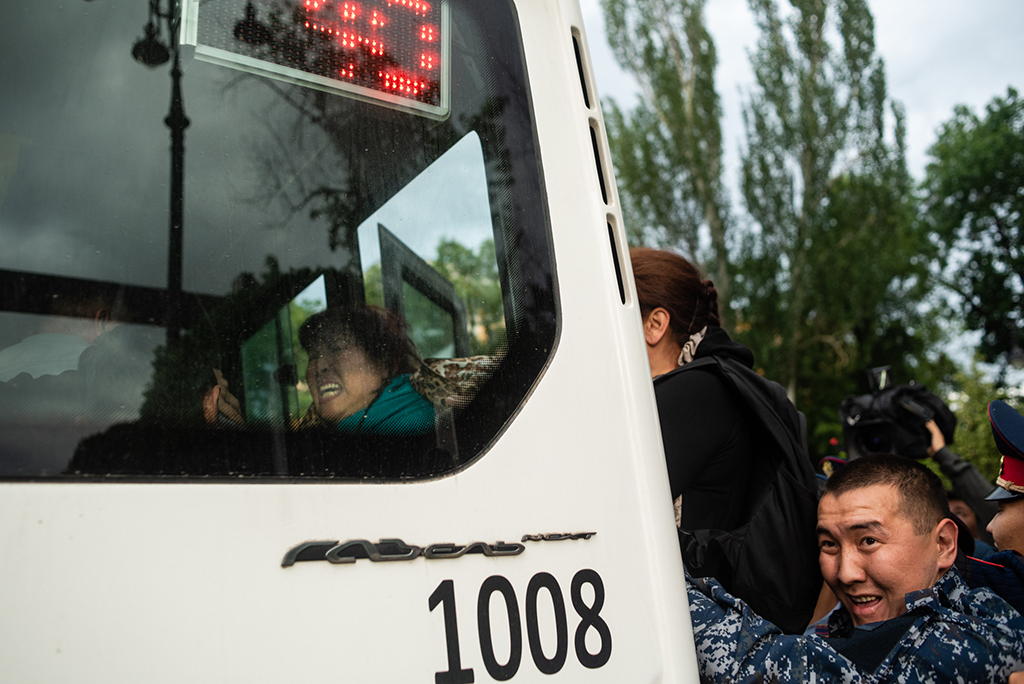 As she was pushed into a police van, she shouted “shal, ket!”, which means “old man out!” This was a reference to Nursultan Nazarbayev, the 78-year-old former president who resigned in the spring but still wields significant powers as he oversees the transition to his anointed successor, the 66-year-old Tokayev.

That encapsulated one grievance that has fueled these protests — the sense that, despite the resignation of Nazarbayev after 30 years in power, citizens still lack a say in Kazakhstan’s future.