Companies close to the former president enjoy a monopoly on lucrative recycling fees. 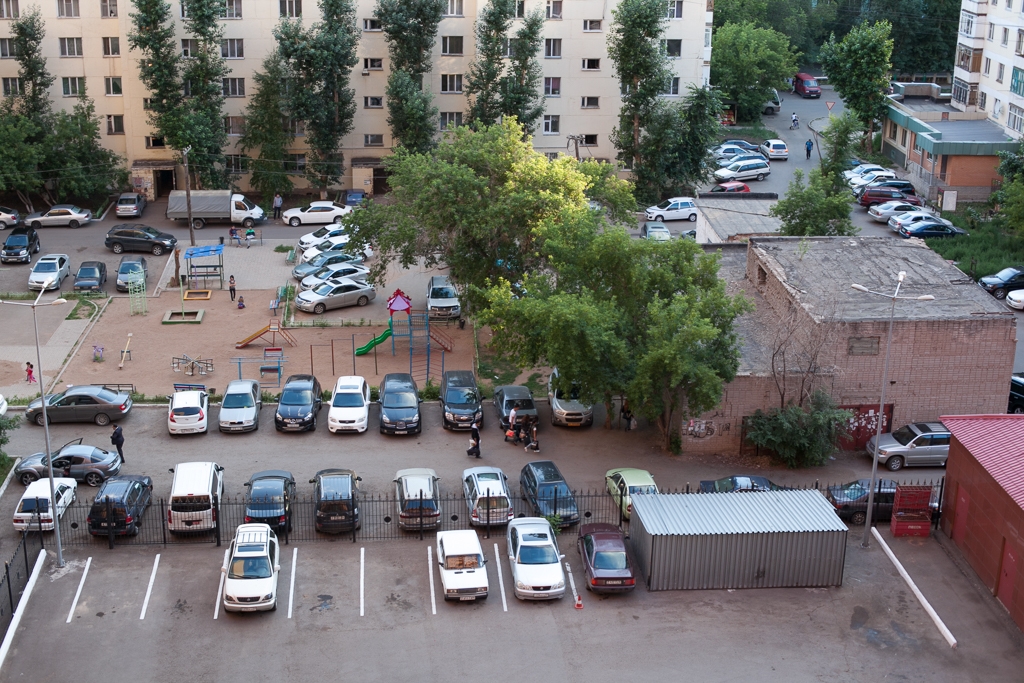 Drivers are livid over recycling fees that have helped make cars in Kazakhstan the most expensive in the former Soviet Union. (Eurasianet file photo)

Right around the time that Kazakhstan set out its stall as an aspiring player in the global green economy, the youngest daughter of the president began evincing an interest in the environment.

Aliya Nazarbayeva’s first public foray into the subject arrived in 2012 with her half-hour documentary, Awakening, which warned of the dangers of prioritizing economic growth over ecological balance.

Her apparent involvement in green initiatives since then has been more lucrative.

And the results are being felt by hard-up motorists. Recycling fees collected by a monopolistic company enjoying close business ties to Nazarbayeva have helped drive up the price of cars on the local market to among the highest in the former Soviet region.

Kazakhstan copied its international peers in most respects when it came to adopting what is known as an Extended Producer Responsibility policy. The idea is that producers or importers of certain goods pay a fee in advance for that item’s eventual disposal.

The system for the recycling fee was developed in 2015 and the tax on vehicles and vehicle components duly came into force the following year.

The contract for collecting those fees was secured by a private entity by the name of Operator ROP. Levies per vehicle can vary anywhere between $1,000 and $9,000. That is a punitive range for a country where nominal monthly salaries stand at around $520 and dozens of times higher than in Europe.

Operator ROP appeared out of nowhere in 2015. According to official documents, its owners are a woman called Shnar Muktarova – who has no public profile – and another company, Eco Waste Solutions.

Eco Waste Solutions is in turn registered to that same mysterious Muktarova and lists its legal address as being on the same premises of the Luxor Wellness Club, a high-end spa that was one of Nazarbayeva’s first pet projects.

The thread linking Operator ROP to Nazarbayeva is hard to detect, but there are strongly suggestive circumstantial clues. Her name appears, for example, on the registration documents of Green Future Management. That company co-owns another firm called Autorecycling, which is one of only two in Kazakhstan licensed to recycle vehicles.

Autorecycling prepares the cars for recycling by stripping them down and removing hazardous components. According to a report on the process by business new website Kursiv.kz, Operator ROP pays Autorecycling about $44 per car for this job.

The second company, RecyclingCompany, operates a Karaganda-based plant that does the larger part of the strip-down job. It is owned by another female entrepreneur, Meruert Makhadi.

Makhadi, like Muktarova, has a vanishingly insignificant public profile, but she is linked via business ties to Nazarbayeva. A public registry lists companies ultimately controlled by Makhadi and Nazarbayeva – Kazrecycleservice and Clean City NC, respectively – as the co-owners of a company called Eko Polygon Astani.

This company, which specializes in waste disposal, has earned around $2 million in state contracts since 2018. The capital’s waste management service is among its notable clients.

Nazarbayeva did not respond to requests for comment sent to the Association of Ecological Organizations of Kazakhstan, which she chairs. But any suggestion she profits off her proximity to power would be familiar in Kazakhstan. Several of the children of former president Nursultan Nazarbayev, who stepped down in 2019 after three decades running the energy-rich country, enjoy prominent public roles and fabulous wealth. Aliya’s sister Dariga, a former Senate speaker, was forced by a British court last year to disclose how she acquired $99 million worth of London property. A few months later, the Financial Times alleged that their brother-in-law, billionaire Timur Kulibayev, siphoned tens of millions of dollars off a pipeline project while managing Kazakhstan’s sovereign wealth fund.

Kazakhstan’s environmental initiatives were ostensibly adopted with every good intention, but drivers are unimpressed.

Prices for new cars have surged, a fact that may account in no small part for the rise in popularity of cheap, smoke-belching clunkers.

And then in 2019, Operator ROP’s mandate was expanded to include collecting recycling fees for agricultural machinery. Farmers complain that this effectively undid subsidies intended to revive harvests and have warned that a knock-on effect on food prices is inescapable.

The personality of Nazarbayeva complicates things considerably. Net Utilsboru, a Facebook group that has become a hub of opposition to the disposal fees, explicitly prohibits members from publishing posts focused on Nazarbayeva. Administrators told Eurasianet on condition of anonymity that they were concerned that politicization of the topic could distract from practical discussions.

One key objective pursued by critics of the recycling fee is for it to be radically trimmed. In eco-minded nations like the Netherlands, where recycling fees are also collected at point of sale, the fee is 30 euros ($36) for all new cars – a tiny fraction of what Kazakhstan levies.

According to price monitoring carried out by Net Utilsboru, the costs of the most popular car models in Kazakhstan have spiked by 40 percent in dollar terms – and by 85 percent in the devaluation-prone tenge – since the end of 2015. Price surges have affected imports and locally assembled models alike.

So far, the group’s efforts have been in vain. A petition against the fees that Net Utilsboru administrators posted on a local website last month quickly reached 40,000 signatures, only for the website itself to suddenly disappear offline. The site’s managers suggested a distributed denial-of-service (DDoS) attack was to blame.

Operator ROP has a combative public defender in its chairman, Medet Kurmagaliyev.

In a recent interview with Baige News website, Kurmagaliyev bristled at the idea that the company was profiteering. ROP was best thought of as an infrastructure development institution with an environmental mission, he argued.

The high fees helped ROP subsidize other types of recycling, such as plastics, which are not systematically recycled in Kazakhstan, he claimed.

When prompted by his interviewer to provide a breakdown of how the company reinvested the approximately 58 billion tenge ($135 million) that it claimed it took in from the fees last year, however, Kurmagaliyev was skimpy on specifics.

A fightback has also come from the state propaganda-coordination arm, the Information Ministry. Late last year, the ministry published a statement casting online opposition to recycling fees as an attempt to manipulate public opinion.

Since the fees were introduced, it said, the number of domestically assembled cars has risen seven-fold. The ministry also claimed that ditching the fees would actually make cars more expensive, although it made little effort to substantiate this argument.

If the government looks prickly on this subject, it is because it knows that passions can run high.

In 2019, farmers staged an unusually militant tractor protest against plans to slap recycling fees on their machinery. Sector lobby groups peppered parliament and the president’s office with letters of complaint. That notwithstanding, the government pushed ahead and by the end of the year, it approved the expansion of ROP’s mandate to include equipment like tractors and combine harvesters.

Yevgeni Mukhamedjanov, a champion of greater transparency in the recycling business who heads a startup called EcoNetwork, is sympathetic to the public discontent.

While Operator ROP regularly publishes figures on its website about the quantities of goods recycled under its system, these are “impossible to check,” Mukhamedjanov said.

Most damningly, he noted, in the more than five years that Operator ROP has existed, Kazakhstan has still not created a national system for recycling agricultural and household waste. Landfills continue to pose environmental hazards.

As if to confirm that point, the ecology minister said on June 14 that the volume of solid domestic waste on unauthorized landfills in Kazakhstan had reached 125 million tons.

Seen in this perspective, nods to the environment look to be in poor faith, Mukhamedjanov said.

In Kazakhstan’s green economy, "the right people get businesses created for them and force other businesses to finance them,” Mukhamedjanov told Eurasianet.