Nursultan Nazarbayev made it clear he will continue to play a role determining the future of the nation. 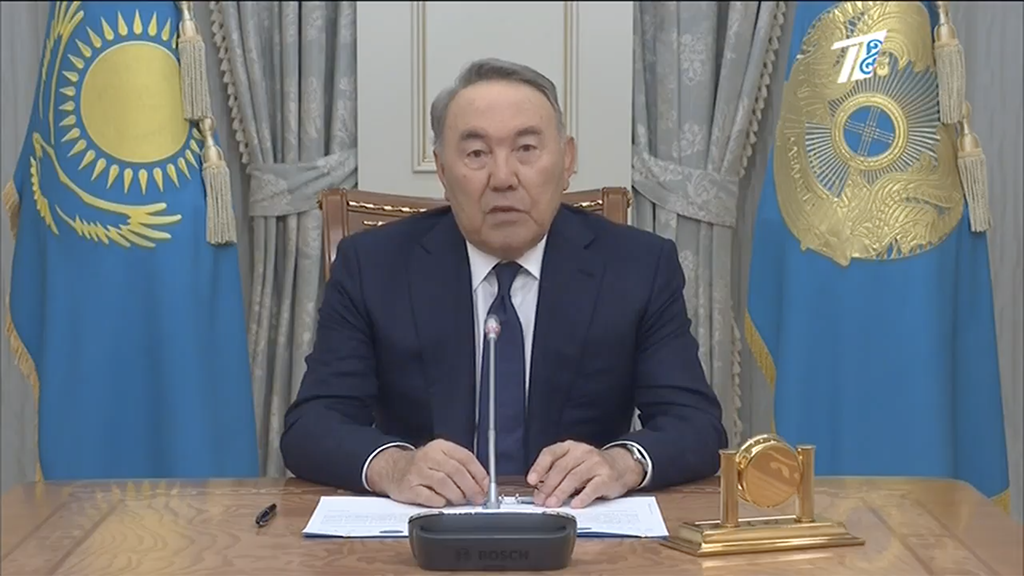 Kazakhstan’s President Nursultan Nazarbayev declared in a shock announcement on March 19 that he was resigning with immediate effect, thereby bringing a close to his almost three decade-long rule over the Central Asian nation.

In a televised address to the nation, Nazarbayev said that the speaker of the Senate, Kassym-Jomart Tokayev, would take over as head of state until presidential elections can be held. The next vote is scheduled to take place in 2020.

“Tokayev is the very person that we can trust to manage Kazakhstan,” Nazarbayev said. “I know him well. He is an honest, responsible and dependable person.”

In his resignation speech, Nazarbayev took stock of what he said were the achievements of his decades running Kazakhstan.

“We put Kazakhstan on the map where there was never such a country,” said Nazarbayev.

There have been growing indications that Nazarbayev might be inching toward leaving the scene. Last month, he generated heated speculation when he addressed the Constitutional Council for guidance on how he might be able to go about relinquishing office and what powers he would retain were he to do so.

Even though he is stepping down as head of state, Nazarbayev will retain a wide-ranging degree of authority under his bespoke title of Leader of the Nation.

In a parallel development, the Security Council was transformed from a purely consultative body into one with a certain degree of coordinating power over all state structures, including security agencies, ministries and local administrations.

In his resignation announcement, Nazarbayev made it clear he will continue to play a role determining the future of the nation.

“I see my future task as supporting the coming to power of a new generation of leaders who will continue the transformations taking place in the country,” he said.

Social media users in Kazakhstan reacted to the news with a mix of shock and, depending on their political positions, concern or delight. Irina Petrushova, a veteran journalist and critic of the government, was sanguine, however, insisting that little would change.

“In reality, he has gone nowhere since he still commands three centers of influence in the country,” Petrushova wrote on Facebook, before listing the Security Council, the board of directors of the Samruk-Kazyna national wealth fund and the ruling Nur Otan party.

“Also, unlike Nazarbayev, Tokayev does not enjoy immunity [from prosecution],” she wrote. “So yes, he left, but he has not gone far.”

“Tokayev is very much a trusted and loyal lieutenant of the president’s and he’s unlikely to deviate from current trajectories,” she told Eurasianet.

Mallinson said the next development to look out for will be who comes after Tokayev.

“This is a kind of interim phase really, and this has been planned for a long time, for several years. It’s a question of how long this can be sustained and whether the population will accept it. I think for the moment, for the next few years, it will be business as usual, and the president will keep his family in key decision-making positions either formally or informally,” Mallinson said.

Ironically, it was Tokayev who first let the cat out of the bag in June 2018, when he told the BBC’s Hard Talk program in an interview that Nazarbayev might not run for re-election in 2020.

“He is a very wise man, he is absolutely reasonable. And I think that in 2020 we shall have presidential elections with other candidates,” Tokayev said in the interview.

Tokayev, 65, is one of Nazarbayev’s most long-term and steadfast allies and would unlikely have made the remarks without some sanction.

The ceremony to swear Tokayev in as interim president will take place at midday on March 20 before a joint session of the upper and lower houses of parliament.

Viewed in retrospect, the last few years appear like a planned gradual evolution leading up to this day.

In another much-watched address to the nation in January 2017, Nazarbayev announced major reforms ostensibly geared toward transferring some presidential powers to parliament and the government.

“The proposed reform is a serious redistribution of power and a democratization of the political system as a whole,” Nazarbayev said at the time.

Put more pithily, Nazarbayev’s intention appears to have been that he should be the first and last president of Kazakhstan to yield such wide-ranging authority.

Parliament is at present overwhelmingly dominated by Nazarbayev’s Nur Otan party. A pair of officially sanctioned ersatz opposition parties have been allowed to occupy 14 out of the legislature’s 107 seats in the directly elected lower house of parliament.

Meanwhile, genuinely confrontational political parties have been either sidelined into irrelevance through harassment and by being ignored by media almost entirely under the thumb of the government or banned altogether.

Born in 1940 in a village called Shamalgan, not far from the former capital, Almaty, Nazarbayev studied at a technical college in Ukraine and then started his career at the Karaganda Metallurgical Works, a steelworks in Kazakhstan’s industrial heartland.

He joined the plant the same year it opened, in 1960. In the late 1960s, he took up posts in the Komsomol – the young Communists – and then the Communist Party proper in Temirtau, working his way up the regional party ranks to become secretary of the Central Committee of the Communist Party of Kazakhstan in 1979.

From there, he was appointed in 1984 to one of the top jobs in Soviet Kazakhstan: chairman of the Council of Ministers. In 1989, he was appointed the first secretary of the Communist Party of the Kazakh SSR, and in 1990 he became president of Kazakhstan, at a time when that title was first introduced in the Soviet republics. His ascendancy to the presidency of a freshly independent state in 1991 was largely a formality.