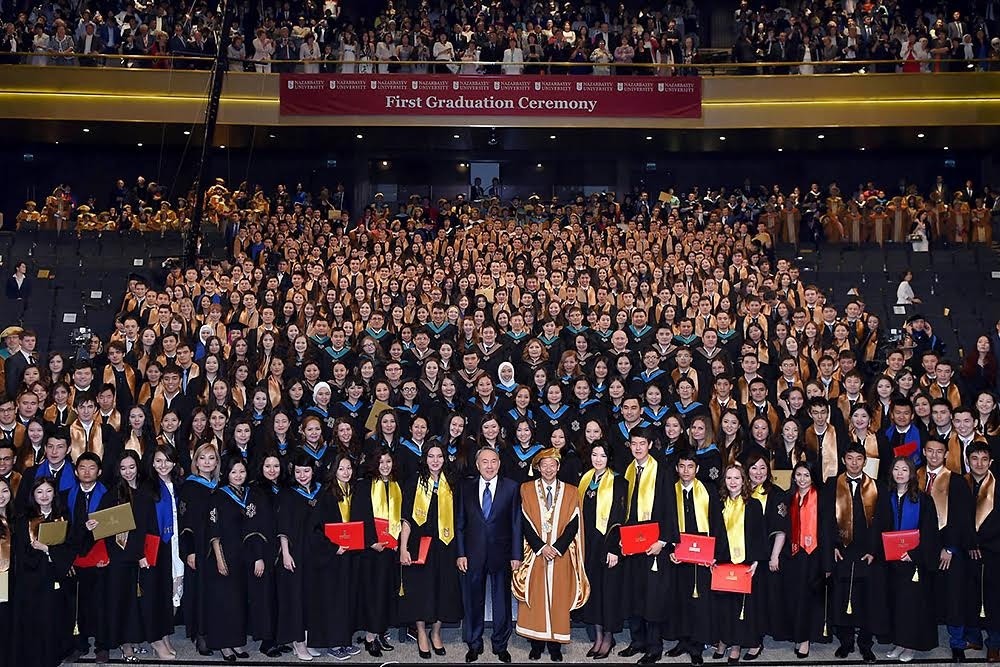 Kazakh President Nursultan Nazarbayev is surrounded by students of the first graduating class of 2015 and teachers with Nazarbayev University in Astana on June 15. The 5-year-old university is contesting accusations by a former Dutch lecturer that it was stifling academic freedom to openly discuss topics controversial to the Kazakh government. (Photo: Kazakh Presidential Press Service)

Management and staff at Kazakhstan’s flagship university are disputing recent accusations of censorship from a lecturer, who alleges he is being squeezed out over attempts to hold lectures on the ongoing conflict between Ukraine and Russia.

In a widely circulated statement, Marcel de Haas, a 54-year old retired military officer of the Dutch army, earlier this month accused Nazarbayev University of using underhanded methods to revoke his contract and exercising censorship. The lecturer claimed efforts to prevent a public talk in August 2014 about the developing confrontation in Ukraine came at the behest of a Russian embassy official in Astana and suggested the university had caved in to outside pressure.

Now, several current and former international colleagues at the university have expressed strong objections over de Haas’ account and instead hailed what they called their employer’s tolerance for the open exchange of ideas.

“I firmly believe that I have academic freedom at [Nazarbayev University], because I exercise this freedom every day at work,” said Charles Sullivan, an assistant professor of political science and international relations.

Nazarbayev University was opened in 2010 with the aim of evolving into a center of advanced learning capable of competing with its global peers, and helping students develop critical-thinking skills rarely encouraged by Soviet-vintage educational establishments. To that end, the university has invested lavishly in attracting academics from overseas.

Many have been skeptical, however, about the extent to which that approach could flourish in an institution funded by a government that has displayed little tolerance for genuinely independent media or public criticism of the authorities. Legislation approved in 2010 even made voicing remarks insulting President Nursultan Nazarbayev — in whose honor the university was named — punishable by up to a year in prison.

But lecturers at Nazarbayev University say that they have addressed numerous contentious developments over the years — ranging from the industrial unrest in the western city of Zhanaozen that was violently quashed by police in 2011 to the current specter of Islamic terrorism in the Middle East.

“I teach contemporary Kazakhstani and Soviet history, and I have found that I can teach controversial topics without any outside interference,” said Zbigniew Wojnowski, an assistant professor at Nazarbayev University.

Wojnowski said he has held seminars on Nazarbayev’s role during the 1986 student protests, which took place at a time when the incumbent president was serving as the Soviet republic’s up-and-coming prime minister. In the Soviet era, Nazarbayev characterized the protests as the work of “hooligans,” but subsequently changed his tune after Kazakhstan gained independence in 1991 to claim he was actually “at the head of the column” of protestors.

No topic these days has proven as controversial as Ukraine’s Euromaidan revolution and its aftermath. Kazakhstan has sought to adopt a carefully balanced stance on the issue, although Nazarbayev himself has on occasion been less cautions and expressed views clearly aligned with those of Russia.

All the same, Wojnowski said public talks he gave about the crisis gripping that country — in March 2014 and July 2015 — were well attended and generated a full range of responses. “Both talks were rather far from the official Kremlin line. If anything, I would describe myself as taking a more pro-Ukrainian than a pro-Russian stance,” he said.

Wojnowski said he also published articles on Russia’s annexation of Crimea and the situation in eastern Ukraine that differed from Moscow’s line without facing any censure.

Spencer Willardson, an assistant professor at the School of Humanities and Social Science at Nazarbayev University, said he has frequently discussed Russia’s actions in Ukraine in his classrooms. “My analysis of these actions often differs from that of my students — many of whom are very pro-Russian. At no time has there been even a hint of pressure that I should constrain myself in these classroom interactions with my students,” Willardson said.

The Dutch lecturer points to his own experience in making his case. Shortly after Ruslan Kuznetsov, a military attache with the Russian embassy in Astana, complained to the university about the perceived anti-Russian content of a talk about the Ukraine conflict planned by de Haas, the event was canceled. Interference by “a foreign diplomat … on the activities of an individual professor are unthinkable at the Western universities with which NU would like to compete,” de Haas said.

Neither Kuznetsov nor the Russian embassy has responded to emailed requests for clarification.

The Russian defense attache’s correspondence was followed by an email to de Haas from Nazarbayev University vice president for student affairs, Kadisha Dairova, warning against pursuing the issue of Ukraine-related lectures any further.

“I do strongly urge you NOT to do this at Nazarbayev University or elsewhere as a faculty member of this University,” Dairova wrote.

Nazarbayev University’s president, Shigeo Katsu, acknowledged in an email to EurasiaNet.org that Dairova’s remarks were regrettable and “unfortunate,” but said they did not reflect official policy. De Haas said that Dairova was, on the contrary, offered support for her position by university management.

“Public feelings in Astana at that time were running very high in response to events in Ukraine. Nazarbayev University feared that an occasion of the kind proposed could create situation in which students and others might be provoked into statements or actions that would lead to genuine concerns for peace and order in the presence of prominent and influential guests,” he said.

De Haas has said he later integrated the content of the planned lecture into a class in one of his courses — evidence, the university argues, that he was not being gagged. De Haas alleges that differences of opinion with his employers led Nazarbayev University to initiate dismissal procedures through improper exploitation of Kazakh labor law.

University management sought to deter him from coming to work, exploiting a law that would give them the right to review his contract after two months of sickness-related absence induced by a sporting injury, he said.

Katsu categorically denied that termination proceedings were initiated on the basis of de Haas’ absence from work due to injury.

Nazarbayev University has said the decision to part ways with de Haas was mandated by a change of emphasis in the areas of study to be offered. “This year, in consultation with international partners, NU [Graduate School of Public Policy] has adopted a new curriculum with core areas of focus in Economics, Public Administration and Management, and Political Science,” Katsu told EurasiaNet.org. “The core modules in these areas do not include security or military affairs, which are Mr. de Haas’ areas of expertise.”

Katsu said that a faculty member who did not teach any of the core subjects would be a poor fit for the university.