The government’s conservation efforts are boosting the endangered saigas’ numbers. 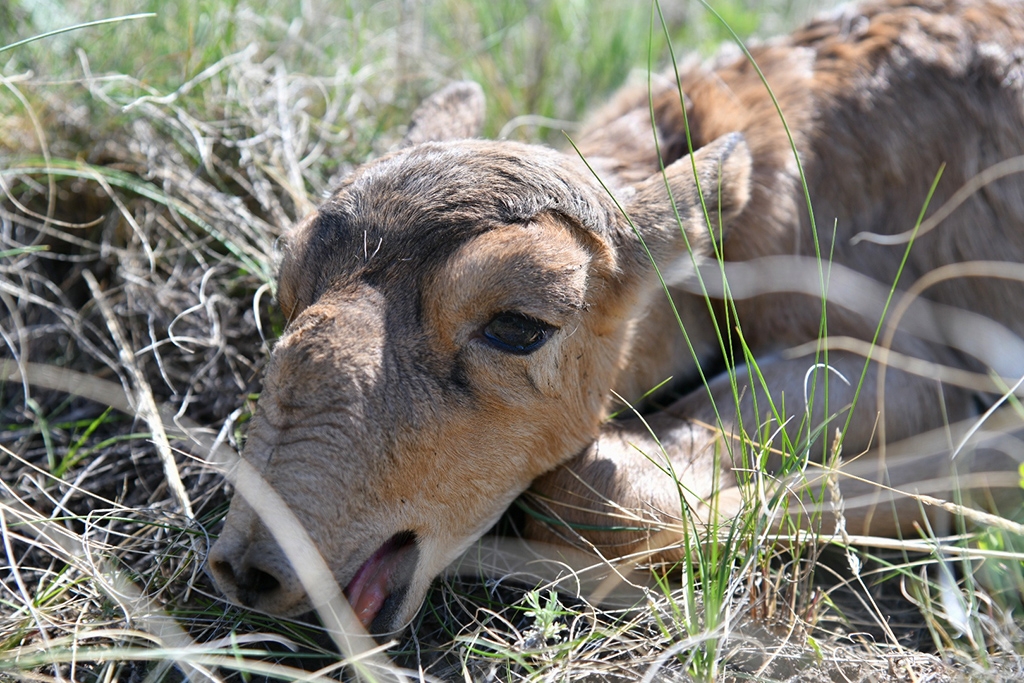 Ready to roam (photos by Erlan Omar except where noted)

As the sun beats down on the steppe of northern Kazakhstan, the land looks lifeless. But with a sudden rustle, a delicate golden creature rises from a mound of grass.

For a moment, this newborn antelope calf totters on its cloven hooves. Then it begins to scamper across the flatlands, picking up speed with a flick of its skinny hindlegs.

As the calving season got underway on a mid-May afternoon, the ground was teeming with the offspring of the endangered saiga, a prehistoric-looking antelope with a long, bulbous nose that filters dust in summer and warms the air during freezing winters. 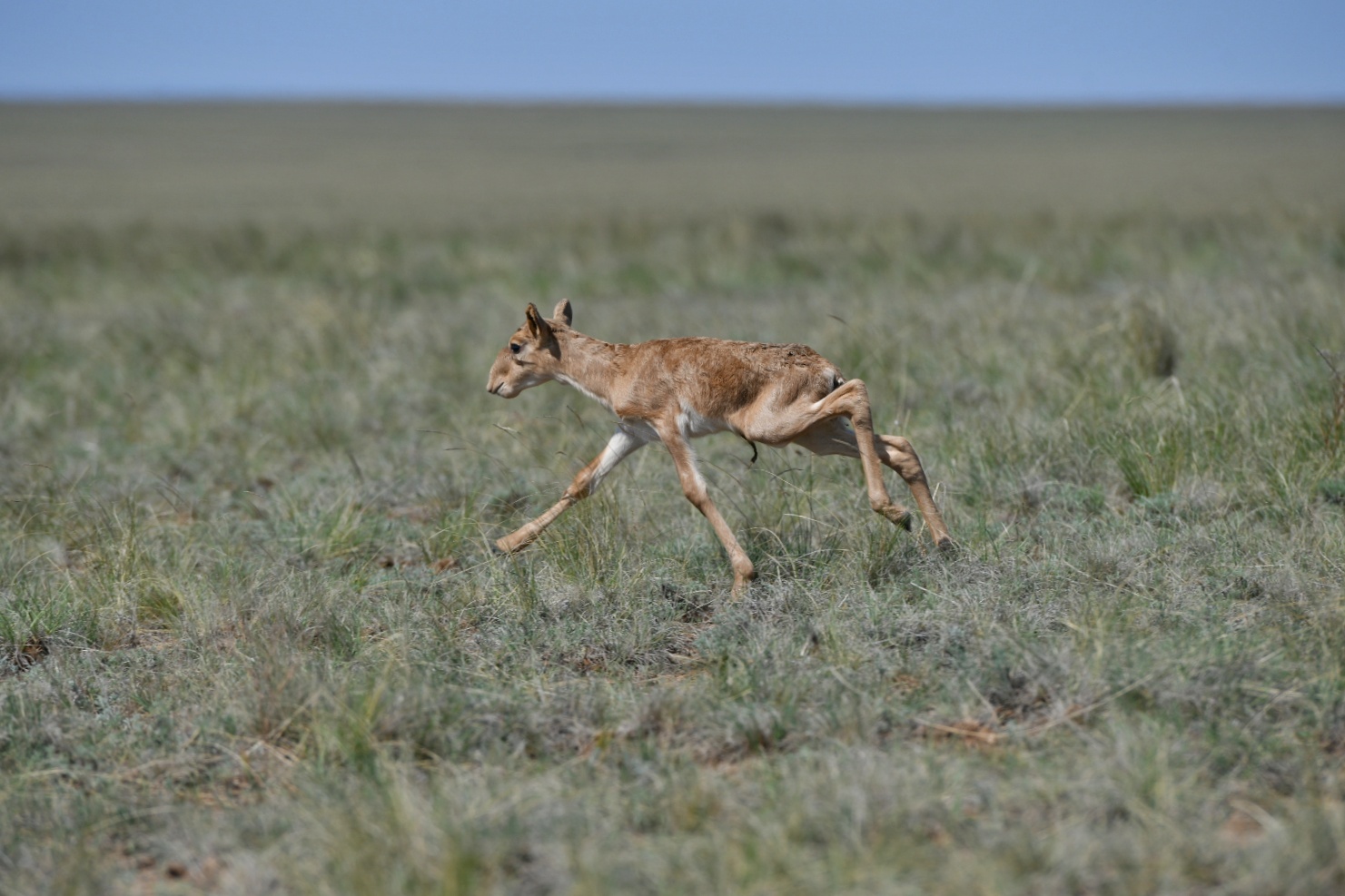 “This is where they gather to give birth,” said Dostay Nurbekov, a former ranger who is responsible for protecting these delicate newborns, as head of the local branch of the government’s Committee for the Protection of Wildlife (known as Okhotzooprom).

“We call it the maternity ward,” Nurbekov jokes of this area 400 kilometers west of Nur-Sultan, Kazakhstan’s capital, deep in the steppe.

The silky calves lie dotted about in their grassy hideaways, concealed from predators. Glistening damply from their recent births, they blink their large black eyes and snuffle with their distinctive noses as they take in the world around them. The mother rejoins the herd after giving birth, and her offspring will follow and feed from any nursing female in the pack.

The calves give their name to a weather phenomenon that helps them start out in life: quralai salqyn (“saiga calf cold”), the cool wind that blows during the calving season.

This wind chill encourages the animal to “to get on its hooves quickly,” a couple of hours after birth, says Nurbekov. 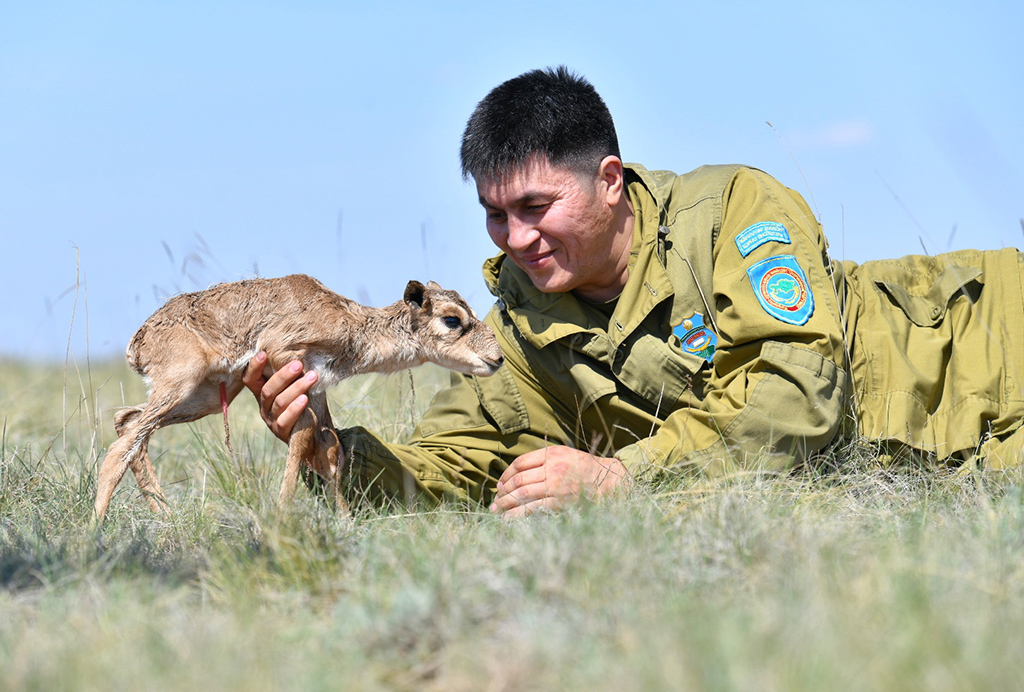 The sight of the newborn antelopes finding their feet is awe-inspiring in a country where the saiga, which has been roaming these parts since the last ice age, was only recently driven to the brink of extinction.

Between 1992 and 2003 the saiga population in Kazakhstan – which accounts for 90 percent of global numbers – nosedived by 98 percent, from a million to 20,000, as poaching and habitat loss took their tolls.

The government’s conservation efforts have brought a dramatic turnaround in the saiga’s fortunes.

The government hopes a count currently in progress will show a further rise.

But this saiga success story could easily suffer a reversal. 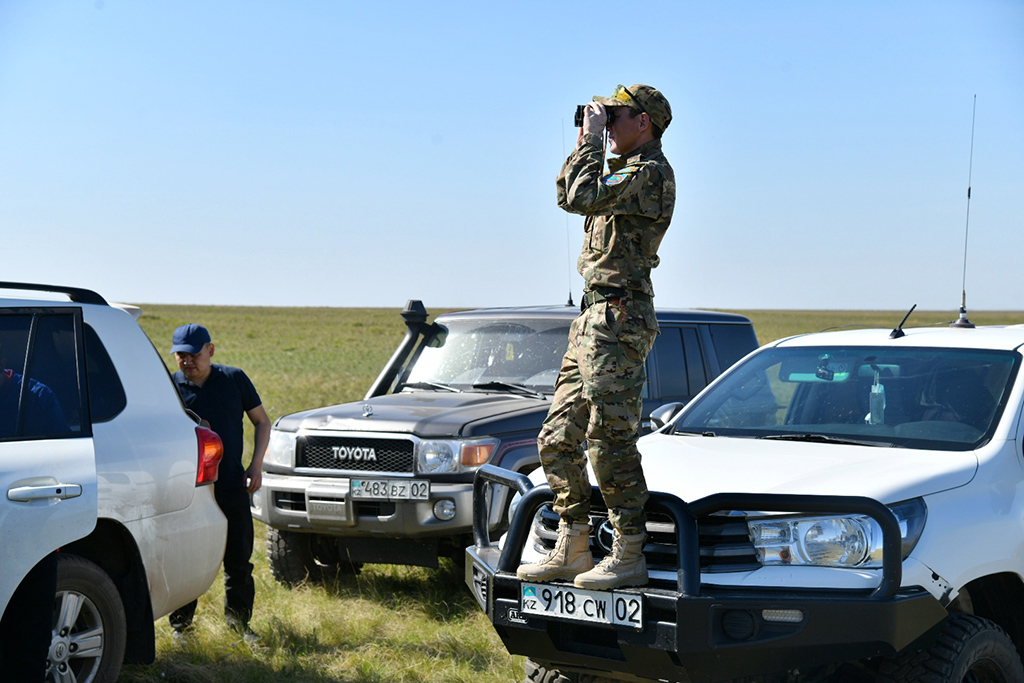 The population is “in recovery” but has not reached a “healthy maximum,” Aleksei Grachev, an Institute of Zoology scientist, said last week.

Life on the steppe is precarious – a point driven home when lightning killed 350 saigas at the beginning of this year’s calving season.

But the most dangerous threat to this antediluvian antelope – which has long outlived its contemporary, the woolly mammoth – is manmade.

Traditional Chinese medicine prizes the male saiga horn, used to treat anything from colds and sore throats to lung and liver disease. This has created a thriving trade in products derived from this critically endangered species, despite a global ban. 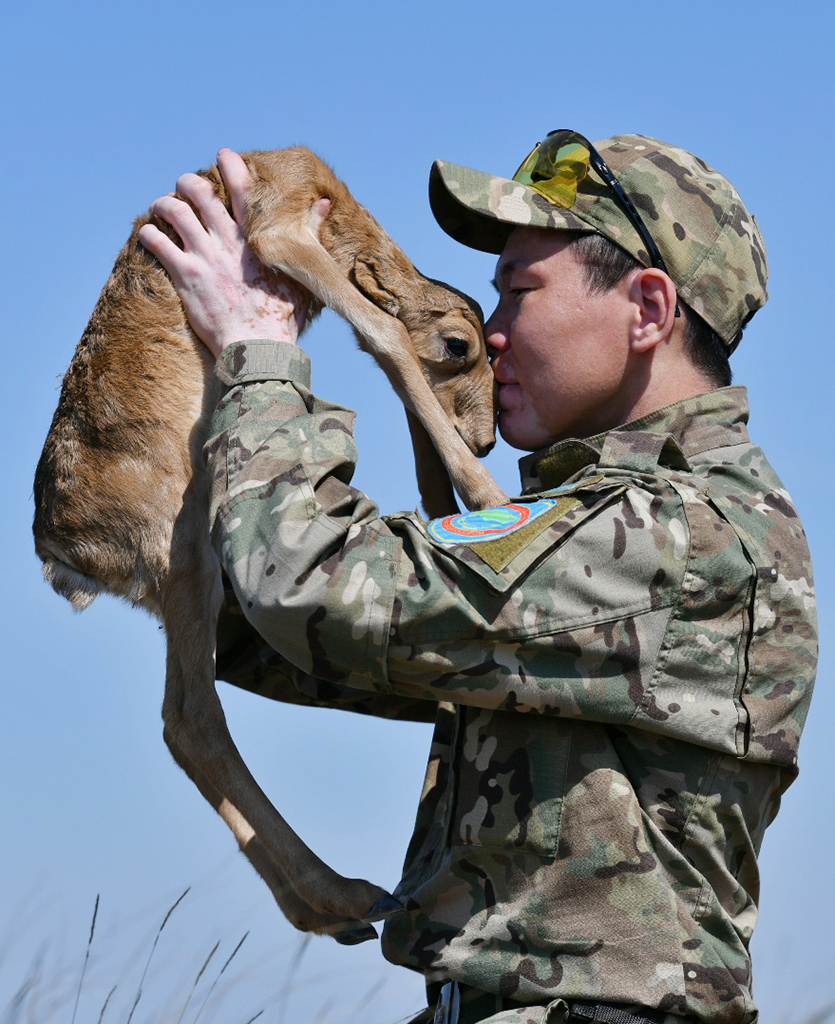 The Convention on International Trade in Endangered Species of Wild Fauna and Flora (CITES) grants the saiga its second-highest protected status, under which trade must be “controlled” to ensure its survival.

Until recently, that took the form of voluntary bans on saiga product exports from the countries where they range: Kazakhstan, Mongolia, Russia, and Uzbekistan.

A bid in 2019 to move the saiga to the highest level of protection under CITES, with trade permitted “only in exceptional circumstances,” floundered. Kazakhstan and Russia opposed it, arguing that the option of controlled trade should remain on the table, in case saiga populations recover sufficiently to permit or even require it, for sustainable management of herds.

But the animal was granted extra protection in the form of a zero-export quota.

This is “a win for saiga,” said Taylor Tench, a policy analyst at the Environmental Investigation Agency, a Washington-based non-profit. It “effectively means that all international commercial trade in horn sourced from wild saiga is prohibited.”

But the black market thrives.

A horn that an impoverished villager in Kazakhstan might sell to an organized crime ring for as little as $12 could have a street value of $5,000 in China and Southeast Asia.

There, poached horns are passed off as from legal stockpiles dating from before the range countries banned the trade. CITES officials estimate that reported legal stockpiles should have run out by 2021 – yet sales continue openly on the streets of Southeast Asia.

In Soviet times, Kazakhstan placed so little value on the saiga that its flesh ended up in cans as tushyonka, stewed meat that is a staple of army rations.

Nowadays, the government labors to save the endangered species.

It has banned saiga hunting and trading in saiga products since 1999, upped maximum jail sentences for poaching to 10 years and cracked down on online advertising of horns.

But recently investigative reporters from Kursiv newspaper posing as buyers easily made contact with traders touting horns for $200 apiece, via intermediaries charging a small fee to grant access to WhatsApp groups where the specimens are sold.

Fighting this high-stakes business is a dangerous job.

Poachers murdered two rangers in 2019, and Nurbekov himself was once stabbed while making an arrest (for which bonuses are paid, supplementing salaries that are well below the national average).

But manning the frontline of the war on poaching is a labor of love for the rangers, who are working “to protect the saiga population so that our grandchildren can see them,” Nurbekov told Eurasianet.

“The beauty of our steppe is in our saigas.”