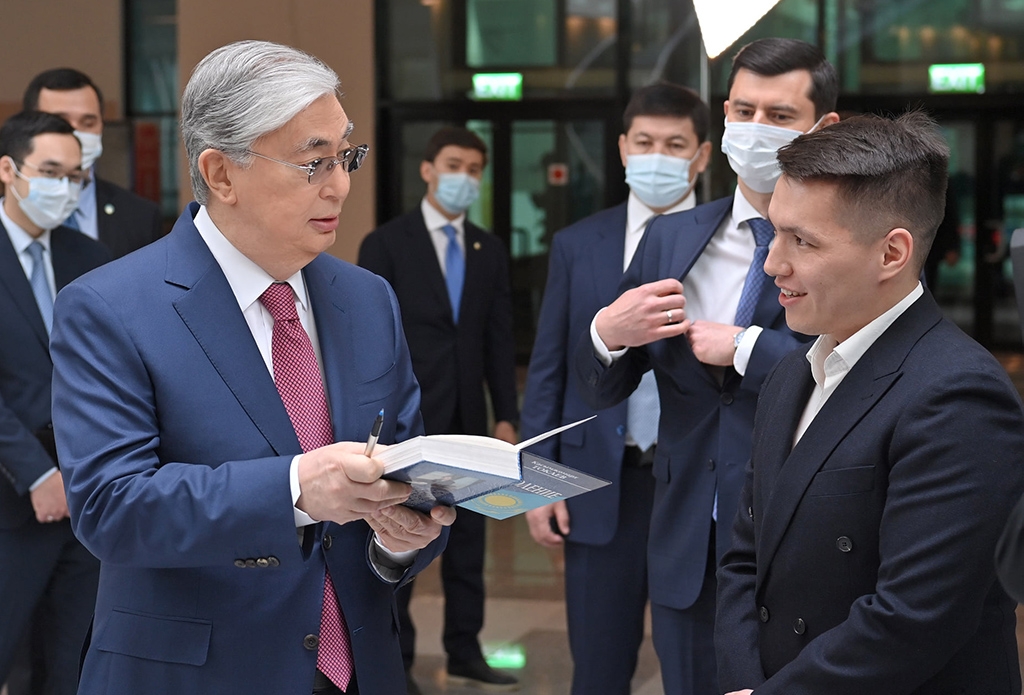 The president intends to rewrite the constitution. (government handout)

The revolutionary tumult that shook France in early 1848 led to the establishment of that nation’s Second Republic.

Kazakhstan’s own political unrest at the start of this year is leading to what government officials are casting as a similarly decisive reset. Sometime soon, voters will be asked to vote in a referendum to approve an overhauled constitution, one that the government says will usher in a new democratic order: Kazakhstan’s own Second Republic.

As ever, skeptics question if reality will live up to the rhetoric.

The constitution has repeatedly been tinkered with at the edges since it was adopted in 1995. Changes in 2017 were ostensibly designed to make the executive more accountable to parliament, but the then-president, Nursultan Nazarbayev, nevertheless retained an ultimate formal veto in policymaking.

Nazarbayev’s successor, Kassym-Jomart Tokayev, clearly still spooked by the anti-status quo-fueled political turmoil that opened the year, on April 29 announced to a forum known as the Assembly of Peoples that a new-look constitution would bring about a “new format of interaction between the state and society.”

And as a sign of his commitment to that spirit, Tokayev says he will allow the public to confirm or reject the reforms.

“Changing the constitution by means of a popular vote will be a clear demonstration of the will of the people. The referendum will allow every citizen to take a direct part in deciding the fate of the country,” Tokayev said.

See also: Nazarbayev to lose his place in constitution

On May 5 Tokayev announced the referendum would be held on June 5.

The government has yet to embark on any comprehensive campaigns to enlighten the electorate about their ideas for reform, however, so many members of the public are still understandably perplexed.

"A referendum? What for? So that we approve a new Nazarbayev?” Natalya Sergeyevna, an Almaty pensioner out walking with her grandson, told Eurasianet with a dismissive wave of the hand.

Dozens of amendments are being proposed to change the wording of around one-third of the 98 existing articles in the constitution. Of these, Tokayev has chosen to focus more heavily on how the political supremacy of the head of state will be diminished, thereby turning Kazakhstan from a super-presidential system to a mere presidential one.

Views vary on whether the specific changes will bring about even that relatively modest goal, however. And even Yerlan Karin, the secretary of state and the man charged by Tokayev with telegraphing the details to the public, has sounded a markedly elitist note by suggesting that the masses may struggle to understand their import.

“It is possible that it will be very complicated for the non-specialist to navigate through such a large number of amendments,” he wrote on his Telegram account on April 27. “Moreover, all these amendments are interconnected and have an overall conceptual logic. So, while discussing specific points, it is important not to miss the broader picture.”

The reason for this sophistry is likely that the individual amendments indeed look far from seismic. The president will not be allowed to belong to a political party and his or her relatives will not be permitted to hold positions as “political civil servants” or head even partly state-owned companies. The number of members to the 49-seat Senate appointed by the president will shrink from 15 to 10.

The Majilis, the lower hours of parliament, is also meant to become more dynamic and reflective of the popular will. Its 98 deputies will be elected under mixed electoral system, meaning that only some of them get their seats via proportional representation votes, as is currently the case. The remainder will be elected in single-mandate constituencies – an idea intended to foster a closer bond between the voter and their representative. As Tokayev complained last month, “many voters do not know their deputies by sight.”

Judges, representatives of the Central Electoral Commission, the state auditing committee, military personnel, and employees of national security and law enforcement agencies will also be prohibited from being card-carrying members of political parties or expressing preferences for them.

Anybody hoping for direct local elections was disappointed, though. Akims, or governors, of the regions will instead continue to be appointed by the president, but they would have to be approved through votes in regional assemblies, which are subject to popular plebiscites. As things stand, it is the president who hires and fires the akims.

An article being added to the constitution envisions the reformation of a body known as the Constitutional Court. Regular citizens will be able to file petitions to test the compliance of legislation with the nation’s fundamental law. The chair of this body will be a presidential appointee.

Another novelty is the creation of the post of a Human Rights Commissioner, who is to be immune from prosecution, “independent and not required to account to state bodies and officials.” This ombudsperson-type position exists in many countries, including Russia, with which Kazakhstan shares many political features. It is less than encouraging, however, that Russia’s Human Rights Commissioner has for decades lacked any real impact or effectiveness.

The reforms have their supporters in the local think tank community.

Urazgali Selteyev, director of the Nur-Sultan-based Eurasian Integration Institute, believes the changes to the constitution will bring more openness to the political order.

“We will get an influential parliament and a generally balanced system of checks and balances between government institutions that will become more effective. It will be the first time in a long time that such a large-scale initiative is being put to a public vote,” Selteyev told Eurasianet.

Never mind that the public, as the main official salesman for the reform has argued, may not even understand the scope of the changes.

Yevgeny Zhovtis, a veteran rights activist and political observer, is wary. He welcomes the provisions intended to bolster human rights, but he questions the grand predictions about an imminent radical transition to democratic values. He sees the reforms as more of a tactical political move than a commitment to root-and-branch transformation.

“The political reforms are not cardinal, their intent is different. And that is to demonstrate that there has been departure from super-presidential authority, from the Nazarbayev era, which people have long been awaiting, and to associate these processes with the name of Tokayev," Zhovtis told Eurasianet.

But will those processes have substance? Tokayev’s embrace of sloganeering – he has taken to alluding to his reform agenda under the rubric of “New Kazakhstan” – is reminiscent of the grand but distant visions of development that Nazarbayev used to hail under his so-called Kazakhstan 2050 strategy, says Zhovtis.

“What we need now is to respond to urgent challenges – the war in Ukraine, changes in global geopolitical and economic processes – and to adapt to the new reality,” Zhovtis said.

Updated to include the planned date for the referendum.