It's a niche scene, but comics have plenty of local material to work with. 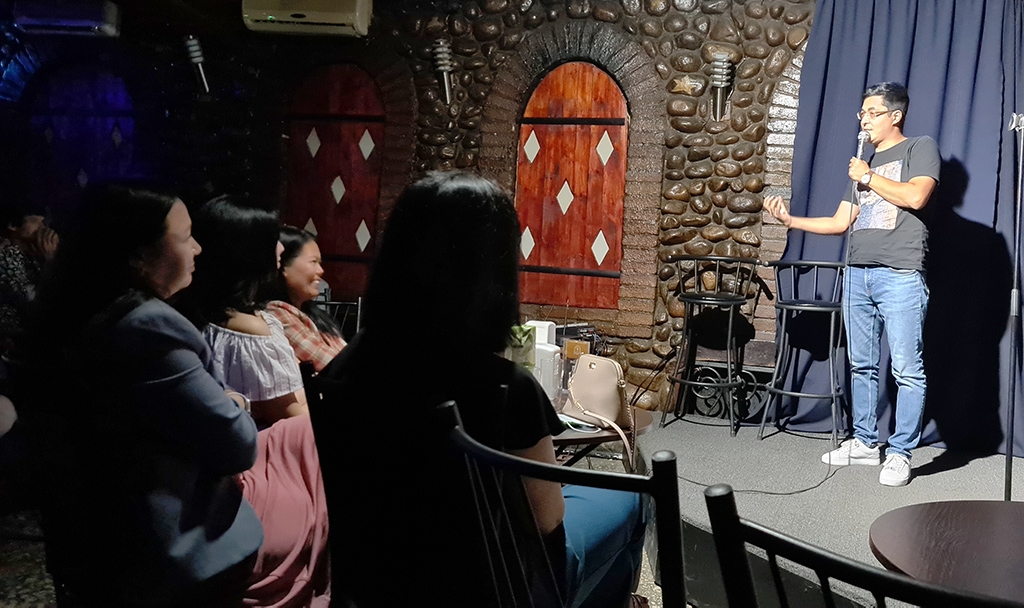 One key to stand-up is knowing your audience.

In Kazakhstan, where the whole idea of delivering a comic monologue to a small, dark room of strangers is still in its infancy, that means leaning into cultural tropes.

Nazerke Baziyeva, for example, gets good mileage out of ridiculing the Kazakh convention about how daughters-in-law are supposed to wait on their husband’s relatives hand and foot.

“I say to my husband: ‘My parents didn’t raise me from birth just so I could do your family’s laundry.’ And he says: ‘But my grandmother is going to give us a thousand bucks as a present.’ And I say: ‘Oh darling, you know I’ve always loved your grandmother.’”

That generated some giggles of recognition among the women in the audience on a recent Wednesday night at Almaty’s Please Stand Up club.

“During the pandemic they were giving us a $100 allowance. This year, they’ve upped that to $150. Hell, if they keep this up, we’ll be able to afford whole milk one of these days!”

The joke lands before he’s had the chance to finish it and laughter rings around room.

The seating area at Please Stand Up is around the size of two classrooms. Around three dozen people were present when Eurasianet visited – not a big turnout considering the price of admission is only $2.50.

That price is intended to bring back the crowds. Stand-up was, like many other forms of public entertainment, dealt a near-fatal blow by COVID-19 restrictions. It was particularly difficult for a comedy scene that has yet to lay down roots. Cutting prices seems to have had some success, though.

“This year, the hall is even fuller than it was during pre-COVID times,” Ruslan Kuanov, the manager of Please Stand Up, told Eurasianet.

The audience is typically men and women aged 25 to 40. One visit, says Kuanov, is usually enough to get them hooked.

It helps to have enthusiastic audience members like Eldos. He laughs loudly and applauds encouragingly in the awkward pauses.

“I see the stand-up artist like the joker in your group of friends, the one who keeps everybody amused. It’s a form of mental relaxation,” Eldos said with a laugh. “We like it here, it’s something new, because we normally just sit around in pubs.”

Few of the acts could exactly be described as hardened pros.

Some jokes are greeted with stony silence, partly for cultural reasons. Like the one comic who cracked a sarcastic joke about his deceased father. In Kazakhstan, respect for one’s parents is a hallowed value, so even creative cynicism can’t quite overcome that taboo. Watching a routine feels like seeing the trial-and-error process play out live.

“Development and experience come with time,” Kuanov said. “The guys are learning from their mistakes, they’re analyzing and studying their performances. It’s okay.”

Who are these Kazakh stand-up pioneers?

They don’t fit a type. Baziyeva has never been involved with the comedy business and fell into doing stand-up by chance in November. She was at an Open Mic night and decided to give it a go. Her monologue about a friend’s tribulations with her husband appeared to hit a chord with the audience and she caught the bug. Baziyeva hasn’t quit her day job, but she comes by once a week at 8 p.m. hoping to cheer up the crowd.

She draws inspiration from her own life: work, family situations, stories involving friends and family. A recurrent theme is the kelinka, or daughter-in-law, a figure treated as something akin to a servant in traditional Kazakh households. This is personal for Baziyeva since it reflects her own life experience.

“I decided that the easiest way to accept this reality was to laugh at it,” she told Eurasianet.

Shangireyev came to stand-up just over one year ago. He had already cut his performing teeth during his stint as a team member on KVN, a venerable Soviet-devised comedy cabaret show that pits teams from various cities and countries against one another. As well as doing stand-up, he works as a toastmaster, presiding over large, festive events like weddings and office parties.

Shangireyev sets himself apart from the rest of his colleagues by dipping his toe into political themes, although he is careful never to mention any names.

“We’re in Kazakhstan, we’re not as open and free as in the West. You need to be careful with your jokes,” he told Eurasianet.

As the artists will ruefully concede, stand-up is fun, but not yet remunerative. People who do it are mostly just pursuing a hobby. The scene is still extremely niche and there are only a few specialized clubs across the country.

None of this is to say there is no pre-existing culture of funny women and men getting up on stage to amuse the audience with gags.

In Soviet times, it was commonplace for comedians to come out onto the stage and tell amusing stories between musical acts at large concerts to keep the viewers entertained. These were family shows and often televised, so the act was kept squeaky clean. These comics, though, were more akin to something halfway between raconteurs and cabaret acts, and their shtick is viewed by younger urban audiences as impossibly corny and old-fashioned.

The stand-up scene in Russia – itself transparently modeled on the American tradition – is a closer point of reference to emergent Kazakh comics. Saltier language and picking on audience members are staples. Roasting, another American comedy tradition, has been imported wholesale into Russia and now Kazakhstan too.

The similarity between Russia and Kazakhstan’s scenes has a downside, however. Raw Kazakh acts are in the unfortunate position of having to measure themselves against slicker competition, whose content is widely available on platforms like YouTube. And the comparison is not always flattering.

“Kazakh stand-ups are different – we are less relaxed,” Shangireyev told Eurasianet. “But that doesn’t mean we’re worse. We just have different cultural values, upbringings, and we do not cross the line.”

Shangireyev is undeterred by the brickbats. He likes that stand-up allows him to explore his funny side more than his toastmaster duties ever can. But it does mean a hard decision is looming.

“This is my dilemma: Either stand-up is going to remain my favorite hobby, or I’ll have to leave to conquer the scene in Russia.”