Kazakhstan’s toi: A feast or a fuss? 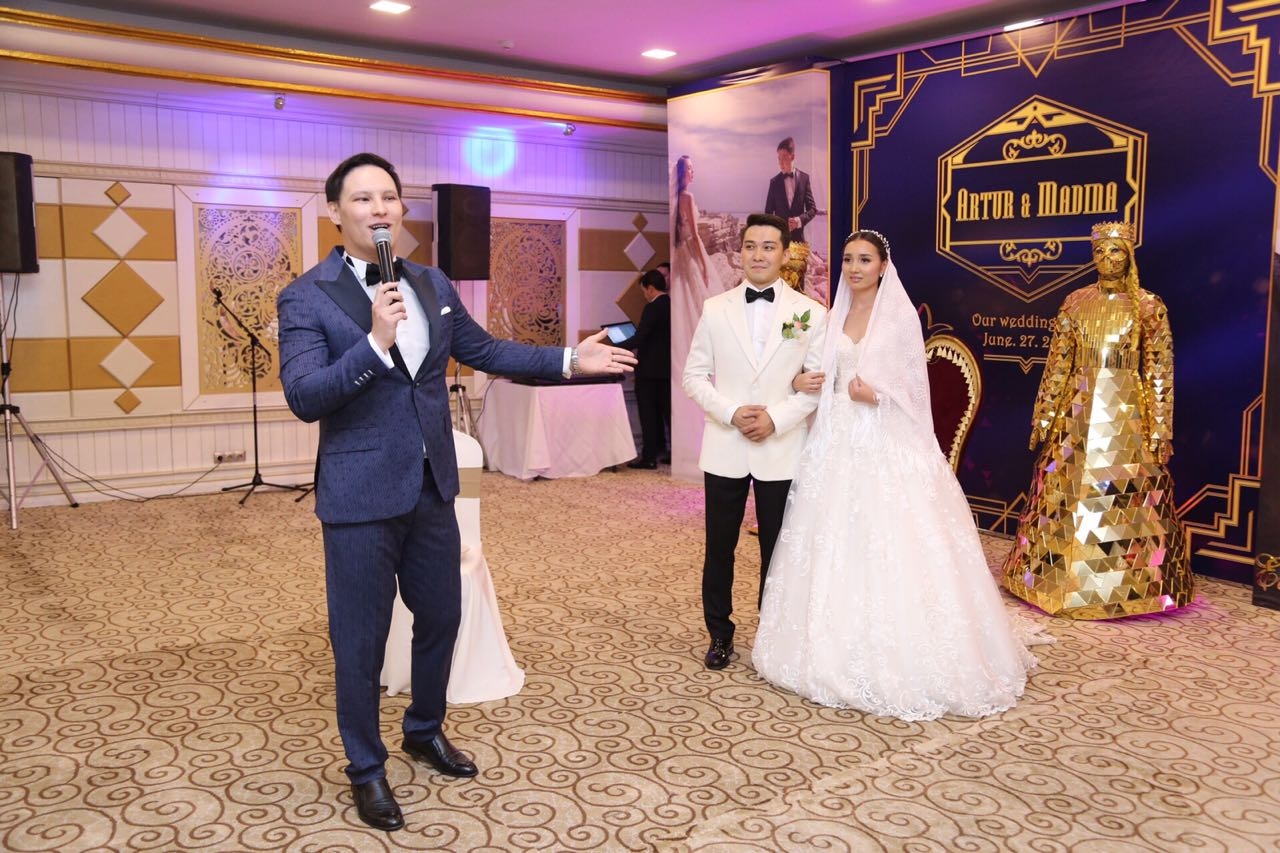 Nurzhan Atash emceeing at a wedding in Almaty. (courtesy photo)

The bride’s relatives glowed with satisfaction at the scene.

Dozens of guests filed into a huge banquet hall in Almaty teeming with snow-white tables festooned with food, flowers and balloons. The party, or toi as it is known in Kazakh, was a roaring success.

The master of ceremonies kept people entertained with a barrage of chatter and jokes and coordinated the speeches, games and competitions.

“I’m the life of the party here. I have to organize the event in a way that people remember it forever,” toastmaster Nurzhan Atash, a well-known TV personality and film actor, told Eurasianet.

Atash gets $2,000 for each wedding party he emcees in Almaty. Anything outside the city costs extra. These are exorbitant fees – around five months the national average monthly salary – but that is what the market dictates.

Weddings are a serious financial outlay anywhere in the world, but they are especially punishing in Kazakhstan.

A standard celebration includes a daylong jaunt in fancy cars for the bride, the groom and all their closest friends. Then there is the photographer and cameraman. The restaurant should be able to accommodate no less than 100 people, and often many more. The cost of wedding clothes for the couple, as well as the matchmakers and immediate relatives, is borne by the bride and groom. All told, the bill for the whole feast can run into the tens of thousands of dollars.

Wealthy Kazakhs are especially wont to indulge. Last year, local media reported on a wedding at hotel in the southern town of Shymkent where the cake alone cost $180,000. The teetering 13-foot-high, 1.5-ton concoction in the form of a royal palace, which featured moving parts, like a mechanical horse and carriage, was so lavish that it even caught the attention of British tabloid The Daily Mail.

Toi are not just for weddings though. These bashes can mark the birth of a child, birthdays, special anniversaries, circumcisions and any number of other rites of passage.

Saving up the money can take years. Across Central Asia, young people will go abroad for many months to work with the express purpose of being able to fund weddings.

Aruzhan Nuraly, deputy director of Almaty-based events company Global Party, told Eurasianet that a big toi is seen by many Kazakhs as a way to assert their public standing.

“Toi is an indicator of social status and position in society. Kazakhs love to demonstrate their wellbeing to others,” she said.

Nuraly said the indulgence in toi is especially pronounced in the south of Kazakhstan, where they are “a whole cult” unto themselves.

The goal is win the approval of relatives, Nuraly said. While prospective spouses are planning their wedding, the main question when making any choice is: “What will people say?”

This obsessive need to impress has created a lucrative market for events agencies, which typically charge a fee equivalent to around 10 percent of the cost of the whole party.

Performers with a reputation are also raking it in. Fees for belting out a few songs can range – depending on the singer’s fame – anywhere from $2,000 to $10,000. The most sought-after artists will make more by performing at a wedding or a similar feast than at a concert. Anybody with the money to do so will go as far afield as Russia to recruit celebrities.

Zira Naurzbayeva, who has written widely about the evolution of Kazakh culture, told Eurasianet that when nomadic lifestyles were the norm, even relatively disadvantaged Kazakhs would fret less about their survival than social prestige.

But Naurzbayeva worries that many people are getting left out of modern-day celebrations and that the culture of genuine hospitality is on the wane.

“Often, people will ‘forget’ to invite those who are less well-off to their toi. The quantity of what is put on tables at big feasts often accords with the importance of the guests,” she said.

An especially grand party can serve as a way of strengthening ties between business clans and building mutually advantageous relationship among families. The toi signifies something more than just the event that is being marked.

Kazakhstan has endured a few years of economic doldrums, and yet the fad for big and wasteful toi shows limited signs of diminishing. This has some in the government worried. Last April, former President Nursultan Nazarbayev even called on his fellow citizens to spend less on parties and invest more on housing.

The reason for this concern is that a lot of people who cannot afford the expense of a wedding often take out loans. Banks even advertise special wedding-themed credit, whereby anywhere up to $15,000 can be borrowed at 15 percent annual interest for five years without putting up collateral.

Almaty-based graphic designer Anuar Kuspanov is now paying off a $12,000 loan he took out two years ago to pay for his wedding.

“I expected most of the guests [at my wedding] would bring envelopes with money [as a gift] and that I would be able to settle my debts. But the cash gifts were not enough. Everybody is feeling this crisis,” Kuspanov told Eurasianet.

Half of Kuspanov’s salary goes toward settling his wedding-incurred debts. He is not thinking about moving out of rented accommodation and borrowing to buy a home until that loan is settled.

While toi continue to perform an unavoidable social rite in many parts of Kazakhstan, pragmatism is on the ascendancy urban centers, where living costs are highest.

When Dauren Omirbayev and Arai Kamzina, a couple from Almaty, got married a few years ago, they did not bother with the expense of a banquet. They just tied the knot in a registry office and then went on a honeymoon to Europe.

“We don’t care what relatives say about us. They always have something to say, and you can never please everybody,” said Omirbayev.