Even as it touts the ineffectiveness of Western sanctions against it, Russia's government is trying a similar strategy against Georgia. 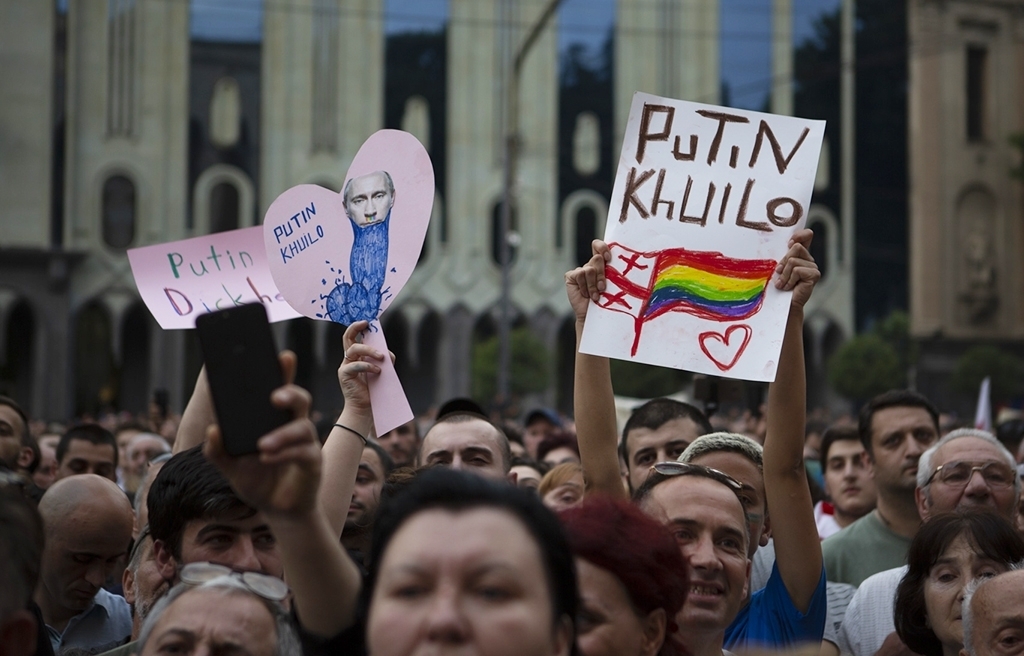 The situation in Georgia “is trending toward becoming worse,” Kremlin spokesman Dmitriy Peskov told reporters on June 24. “Unfortunately, we can say that a very Russophobic hysteria now reigns in Georgia,” he said.

Two days earlier, Russian President Vladimir Putin announced that Russian airlines would be banned from flying to Georgia and that Russian tour operators would be discouraged from selling trips to the country. Peskov said that those sanctions would be lifted when Moscow saw a decrease in anti-Russian sentiment in Georgia.

“The issue is simply for Georgia to return to a non-Russophobic path. As soon as we see that, then we can think about reexamining the decisions that have been taken,” Peskov said.

In addition, Mikhail Troitskiy, a foreign-policy analyst based in Moscow, said the Kremlin’s motivation may not be about Georgia itself as much as about proving that it can throw its weight around.

“Russia is keen to show it has economic clout, that it can operate by economic statecraft just like the United States and its allies,” Troitskiy told Eurasianet.

The current crisis was sparked on June 20 by the appearance of a Russian lawmaker in the Georgian parliament. Russia heavily backs the de facto governments of Abkhazia and South Ossetia, two breakaway territories that most of the world (but not Russia) recognizes as part of Georgia. Moscow also bases thousands of troops in each territory and has been building barbed-wire barriers to create de facto borders with Georgia.

In this context, the symbolism of the Russian MP sitting in the Georgian parliament enraged many Georgians, leading to massive anti-government and anti-Russia protests and a broader outbreak of anti-Russian sentiment in the country.

Meanwhile, Russia’s consumer protection agency issued a suspiciously timed warning that it had been observing a “decline in quality” in alcohol products imported from Georgia. Wine is one of Georgia’s major industries and Russia the top customer, and the agency is well known for its politically motivated import bans. Russia banned the import of Georgian wine between 2006 and 2013, the recent nadir of Moscow-Tbilisi relations.

And Russian Foreign Minister Sergey Lavrov implicated Georgia’s Western partners in the crisis. “The Western overseers are prepared to close their eyes to the excesses of nationalists, to Russophobia, even if it severs all ties of the Georgian people with our country,” he said. “We are soberly assessing the role of the United States and its allies in the world arena.”

Russian pressure is unlikely to lead many Georgians to want closer ties with Moscow, and the travel ban only epitomizes what most Georgians see as the Kremlin’s bullying of their country. Many Georgian tourism-oriented businesses have responded to the sanctions by publicizing anti-Russian policies of their own, like instituting 20 percent surcharges on Russian tourists. (The Russia-backed territories make up about 20 percent of Georgia’s territory.)

But Moscow appears to be governed by the same logic that American and European governments have used when applying sanctions against Russia over its backing of separatist movements in Ukraine, Troitskiy said. “It mirrors the thinking about the sanctions against Russia – you want to create costs for Georgian businesses and for them to lobby their government against whatever anti-Russian moves that they may be contemplating,” Troitskiy told Eurasianet.

The Russian government has long argued that the Western sanctions have in fact had the opposite effect, consolidating the Russian people against the West and toward more reliance on other partners – ironically, the same effect now being seen in Georgia. “It mirrors Russia’s own rhetoric, that sanctions have a rally-around-the-flag effect,” Troitskiy said.

There is also a logic of simply punishing Georgia for allowing “insults” against Russia. “Emotionally, it may have to do with not wanting Georgia to be able to insult Russia and get away with it – you can never get away with insulting a country on which you rely economically,” Troitskiy said. The government’s message, he said, is: “We can just squash you for this relatively minor incident.”