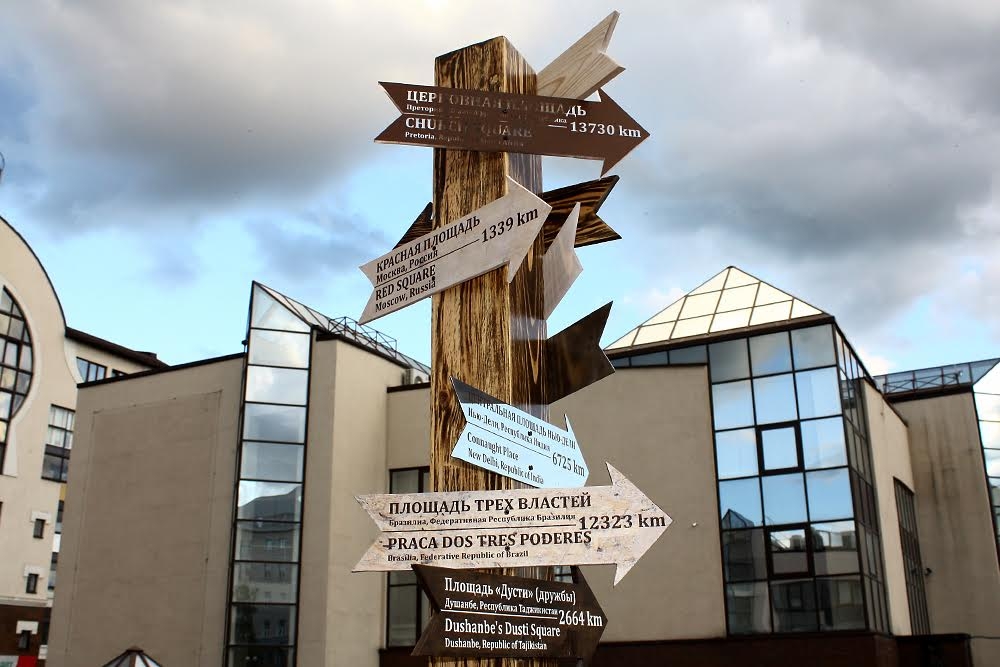 Nailed to a post in central Ufa, arrow signs point the directions and distances to prominent city squares in the capitals of member states of the SCO and BRICS countries attending the three-day summit in Russia. (Photo: Joshua Kucera)

Russia kicked off three days of high-level summitry on July 8, hosting leaders of several Asian and developing countries that it hopes will form the foundation of a new, non-Western world order.

Leaders of countries including China, India, Brazil, South Africa, Pakistan, Iran, and most of the Central Asian states gathered in the central Russian city of Ufa for simultaneous summits of the BRICS countries and the Shanghai Cooperation Organization (SCO). The two groups have been key instruments in Moscow’s strategy to bolster its international position in the wake of its estrangement from the West and the crisis in Ukraine, and the joint summits are an opportunity for Russia to show that, in spite of the efforts of European countries and the United States, it is not isolated.

“The future of the world economy belongs to the BRICS and SCO countries,” said Igor Kholmanskikh, Russian President Vladimir Putin’s special representative in the Urals region, which includes Ufa, in the run-up to the summits. “Cooperation with new, growing centers of power ... is our answer to sanctions and pressure.”

These new, non-Western groupings are “a matter of international prestige for Russia,” said Mikhail Troitskiy, an associate professor of international relations at the Moscow State Institute of International Relations. One of Russia’s aims at the summit is to get a joint communiqué criticizing “unilateral sanctions and attempts at externally orchestrated violent regime change,” which Moscow believes the West is plotting around the post-Soviet space, Troitskiy added.

Russia put great efforts into the preparation of the summit, including building seven new hotels in Ufa, expanding the airport and repaving roads. What was not rebuilt was often hidden, and dozens of dilapidated buildings in the city center were draped with cloth facades, resulting in the inevitable comparisons to the “Potemkin villages” constructed to hide the poor condition of 18th century Russian provincial towns from the visiting Empress Catherine II. The city’s enthusiastic repaving efforts became a local social media meme, with Internet users sharing photos of the lawns and railroad tracks covered with asphalt, and collecting asphalt jokes.

“The Ufa city administration is like a bachelor who didn't have time to get ready for a girl’s arrival, and in the two minutes while she was coming up in the elevator, tried to quickly clean up the apartment, hiding the dirty socks under the couch,” wrote prominent Moscow blogger, Iliya Varlamov, in a post on Ufa's preparations.

Ufa is the capital of Bashkortostan, traditional home of the Muslim, Turkic Bashkir people, and particular attention was paid to presenting the city as a “Eurasian” site combining elements of East and West, mirroring Russia’s geopolitical “pivot to the East” embodied by the SCO and BRICS. The regional history museum featured an exhibit on the Silk Road, the city’s art museum hosted an exhibit, The Image of the East in Russian Art, with paintings from Russia’s Muslim periphery. Summit visitors were given a book, Bashkortostan at the Junction of Europe and Asia.

Romantic invocations of Eurasian identity aside, Russia faces real challenges in shaping the emerging new world order to its liking, including the directions of the SCO and BRICS. Both groups are relatively new (the SCO was formed in 1996, BRICS in 2009) and while all member states share a broad goal of breaking the monopoly of Western-led international organizations, the means by which they will do so are still under discussion.

One of the top items on the Ufa summit agenda will be the creation of an SCO development bank to finance infrastructure development in the region. China has been advocating for such a bank for years, but had been stymied by Russia, which feared that such a bank would give China too much power in Central Asia, which Russia considers its sphere of influence. China then moved quickly to establish a separate bank that would fulfill many of the same roles, the Asian Infrastructure Investment Bank (AIIB).

Russia, however, has recently changed tack and now supports an SCO bank, realizing that China’s influence in the region is rising with or without a bank and that it would be better to have some input into Beijing’s investments in Central Asia, said Gregory Shtraks, a resident fellow at the Center for Russian Studies at East China Normal University in Shanghai. “The Russian economy is really beginning to feel the pinch of sanctions and the low oil prices. Putin will be desperate to bring home at least some good economic news from the Ufa summits and this development bank would be such a deal,” Shtraks said. Eventually funds from an SCO bank could be used to fund projects in Russia, Shtraks added. “This is, of course, a long-term prospect, but with Russia now fully pivoting to Asia an SCO development bank would seem to fit in Russia’s general economic agenda.”

The SCO will be bolstered by the addition of two new members, India and Pakistan, which are expected to formally begin their accession to the group in Ufa. The impact that will have on the organization is unclear: while it will increase the profile of the group and make it appear vital and growing, expansion – particularly the addition of India, a traditional rival of China – could also make it harder for the organization to reach common positions.

That gridlock may be part of China’s strategy, wrote Alexander Gabuev, chair of the Russia in the Asia-Pacific program at the Carnegie Moscow Center, in a recent analysis. China has moved ahead with new structures like the AIIB and its Eurasian economic integration program, the “One Belt, One Road” (OBOR) initiative and now is content to let the SCO stagnate.

“This explains why China gave up its veto over Indian accession, brokering the incorporation of its long-time ally Pakistan in exchange. The addition of the two archrivals will make an already dysfunctional organization even more dysfunctional,” Gabuev wrote. “Now that China has the OBOR initiative, it can quietly observe the slow erosion of the once important SCO. As Russia attempts to use the SCO as a platform from which it can present itself as an alternative to Western hegemony, it has already ceded its role as regional economic hegemon to China.”