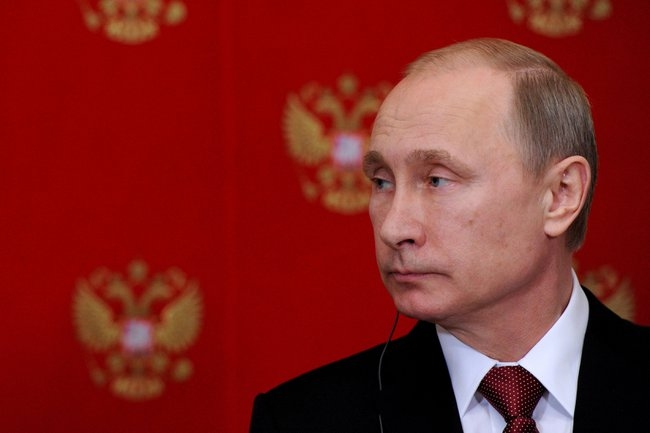 The last verified sighting of Putin was March 5, when he met with Italian Prime Minister Matteo Renzi in the Kremlin. (Photo: Russian Presidential Press Service)

The intrigue is building in Moscow. Vladimir Putin has not been seen in a week, and the rumor mill is going into overdrive.

Helping fan the flames of speculation, the official presidential website seems to be going into “Swan Lake” mode. The site has taken to posting old pictures of Putin in action in an attempt to make it seem as though it is business as usual.

The last verified sighting of Putin was on March 5, when he met with Italian Prime Minister Matteo Renzi in the Kremlin. Since then the presidential website, Kremlin.ru, has posted a few items that smack of an attempted cover-up. Specifically, Kremlin.ru claims that Putin met with the head of the Karelian Autonomous Republic, Alexander Khudilainen, on March 11. However, the business daily Vesti Karelia reported on the meeting on March 5, saying that the meeting took place on March 4.

In addition, website reports on Putin’s meeting with the head of Yamalo-Nenets Autonomous Region, Dmitry Kobilkin, on March 10, and a video of his meeting with Russian women dedicated to International Women’s Day on March 8 were reportedly prerecorded.

Presidential Press Secretary Dmitry Peskov has vigorously denied that the Kremlin is fudging any meeting times.

Kremlin watcher and former political insider Andrei Illarionov has gone so far as to suggest that a coup against Putin may be unfolding. He suggested on his personal blog that a conspiracy involving five generals is intent on putting Putin on ice. If Illarionov’s analysis is accurate, he wrote: “In the coming days we can come to expect the resignation of Dmitry Medvedev as prime minister, and his replacement by [former defense minister] Sergei Ivanov.

Other rumors swirling around Moscow indicate that Putin is battling cancer, or has had either a heart attack or stroke.

Peskov, Putin’s press secretary, has tried to downplay the rumors, but his answers did little to extinguish smoldering speculation. When queried by Ekho Moskvy radio about the health rumors, Peskov replied: “There’s no need to worry. Everything’s in order.”

Peskov also hinted that Putin remains active in running the government. “He has meetings all the time, but not all meetings are public,” Peskov said.

Just about the only facts that are certain is that Putin did not show up for a ceremony to sign a treaty of alliance with the breakaway Georgian entity of South Ossetia. The Kremlin has likewise announced the postponement of a presidential visit to Kazakhstan.

As for the future, it may be that, in the wake of opposition leader Boris Nemtsov’s late February assassination, all bets are off.