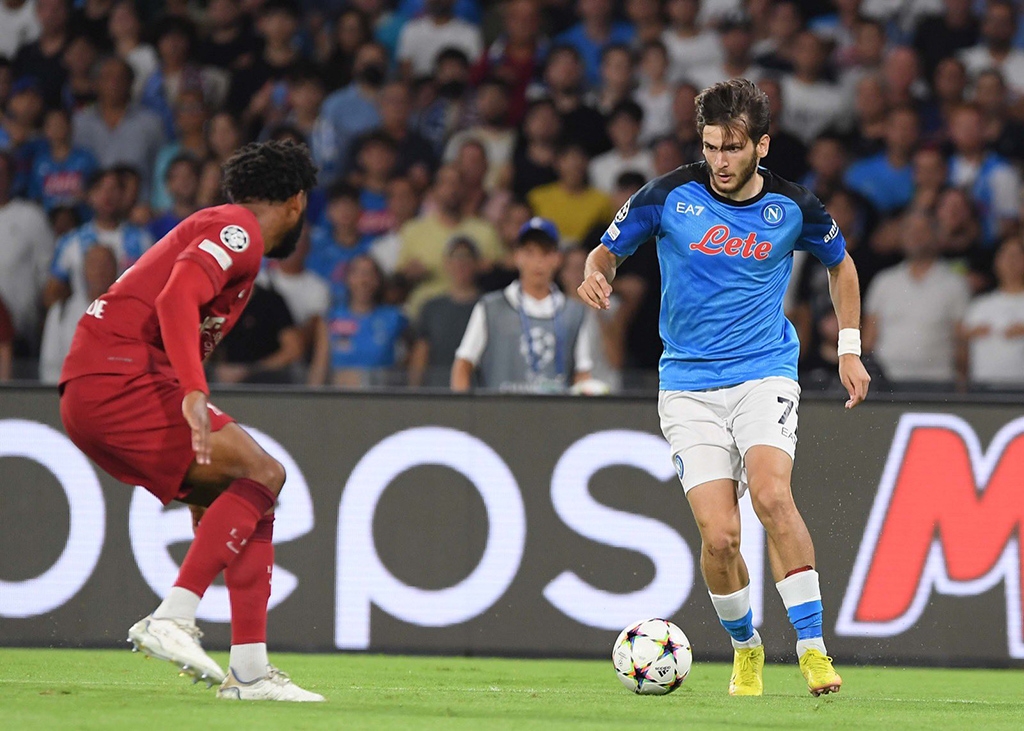 Can his star power keep Khvicha Kvaratskhelia (right) above the political fray at home? (SSC Napoli)

At home, many Georgians say he is the reason they started watching soccer. Abroad, fans are struggling to learn to pronounce his hard-to-spell but increasingly must-know name. And in the Italian city of Naples, his new home, local Georgian migrant workers credit him for making them feel seen and proud.

The international success of Khvicha Kvaratskhelia, a 21-year-old Georgian soccer player, is something Georgia has not seen in many years. Over the past few months, the young winger has become a beloved sensation in both Italy and Georgia.

Kvaratskhelia’s European career started after Russia’s invasion of Ukraine. He had been playing since 2019 for Rubin Kazan, a Russian club, but left as a result of sanctions against Russian soccer: The sport’s organizing body, FIFA, banned all Russian clubs from international competitions and allowed foreign players to unilaterally break contracts with Russian teams.

He then spent several months at Dinamo Batumi, a Georgian club, until he was shipped in July to Napoli, one of the leaders in Italy’s Serie A league.

His transfer fee of $10 million has turned out to be a bargain. He began his Italian career with three goals and an assist in his first four Serie A games, and with impressive versatility: One goal was with his left foot, one with his right, and the third with his head. And he made highlight reels in his first UEFA Champions League match for his deft dribbling.

With all of that, his rise to international fame has been swift – and earned him a nickname: Kvaradona, a reference to the legendary Diego Maradona, a former Napoli star whose memory is cherished in Naples.

“Most dangerous man to come out of Georgia since Joseph Stalin,” one Twitter user commented, a backhanded compliment that left many Georgians with uneasy smiles.

While Kvaratskhelia was already beloved in Georgia for his contributions to an unusual run of success for the national team, that admiration has paled in comparison to what he is achieving in Italy. Seeing their young countryman shine in Europe has become a source of healing for a Georgia that has lately had a rough time of it.

The war in Ukraine has shocked Georgians, made again aware of their own vulnerability. The economy continues to struggle, and political infighting is only getting worse. But all these troubles can be forgotten for 90 minutes when Georgians are glued to their TV screens, watching Napoli and Kvaratskhelia.

But this public admiration also has raised the specter of a long-running tradition for star Georgian athletes: After achieving success in the stadium, someone attempts to recruit them for dirtier work in the political arena, either to campaign for or join a political party – often to the disappointment of fans with different political views.

Kaladze himself is a former soccer player who also had a remarkable career in the Serie A club Milan. His personal story, and comments about Kvaratskhelia, made many fear that the young player was being groomed for political work.

Kvaratskhelia’s career in Russia also has put him in the center of political controversies. His cautious response to a journalist’s question about his departure from Russia, considered an enemy by most Georgians, drew criticism from some opposition-minded media personalities and activists for not being critical enough of Moscow and the war in Ukraine.

While those jibes didn’t resonate strongly, ruling party figures were nevertheless quick to use them as fuel against the opposition.

“They [the opposition] even confronted Khvicha Kvaratskhelia, who represents our country not only in Italy but in the whole world, with dignity,” Irakli Kobakhidze, the chairman of the ruling party, said in his opening remarks as parliament returned for the autumn session on September 6.

Kobakhidze went on to claim that those attacking Kvaratskhelia would “never become better attackers than Khvicha himself.”

Other political and public figures, meanwhile, sent Kvaratskhelia on a geopolitical mission of sorts, depicting him as an embodiment of Georgia’s geopolitical journey away from Russia and toward Europe.

“The most important thing Kvaratskhelia’s success teaches us is how much difference it makes when the same person plays in a Russian club versus a European one,” Georgia’s Public Defender, Nino Lomjaria, said in a September 7 Facebook post.

In the eye of the political storm is the young man described as “shy” by his coach at Napoli and who seems to be handling the pressure of high expectations with equanimity.

His success on the pitch earned him the player-of-the-month title in Serie A in August, and his star appears to be continuing to rise. What remains to be seen is whether that will keep him above the political fray at home.