Kyiv Making Gains in Religious Dimension of the Ukrainian-Russian Conflict 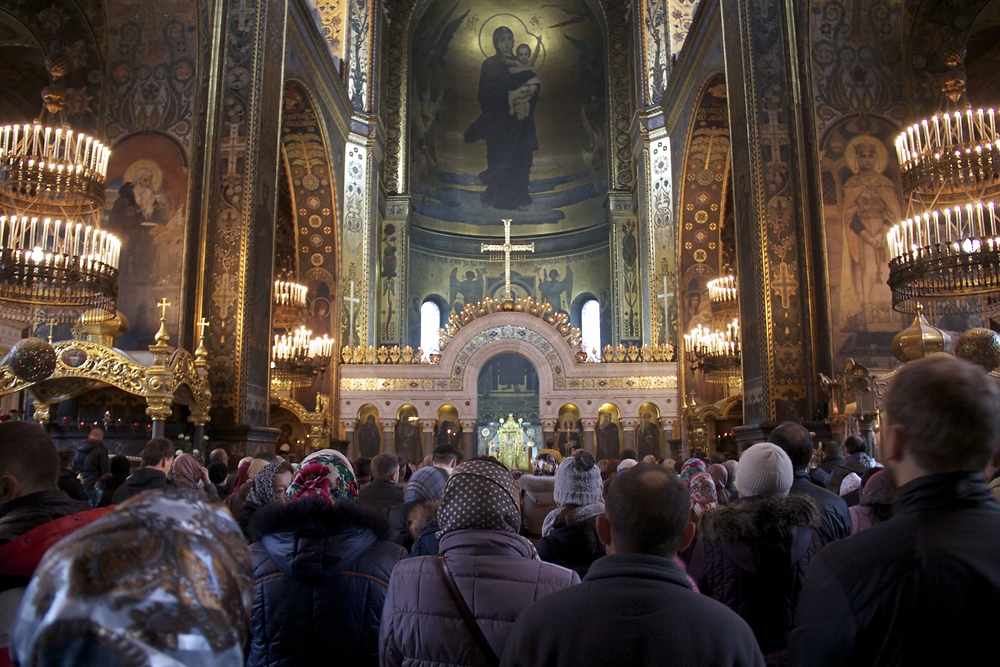 Russian President Vladimir Putin is trying to use religion to advance an expansionist agenda. But an increasing number of believers in Ukraine appear to be rejecting the notion that Putin and the Russian Orthodox Church are the defenders of the true faith.

Religion became a battleground in Ukraine long before the Euromaidan movement gained power in Kyiv, Russian troops snatched Crimea and separatists plunged eastern Ukraine into civil warfare. The struggle has been rooted mainly in differences over church polity, rather than doctrinal disputes. Its origin can be traced to the Soviet collapse in 1991. Having regained statehood at that time, Ukraine’s new political leadership helped some Ukrainian clerics declare ecclesiastical independence from the Moscow in 1992 by establishing the Ukrainian Orthodox Church-Kyiv Patriarchate.

In ensuing decades, followers of the Kyiv Patriarchate jockeyed for ecclesiastical control with adherents of the Ukrainian Orthodox Church who remained loyal to the Moscow Patriarchate. The squabbling was mainly confined to the matter of dividing church property, and the Kyiv Patriarchate made gradual, but steady inroads. Even so, the Moscow Patriarchate today still retains influence over roughly three-quarters of the approximately 16,000 Orthodox Church parishes in Ukraine. At the same time, the ratio of Orthodox believers’ loyalties in Ukraine was believed to be evenly split, 50-50, between the Kyiv and Moscow patriarchates in 2012.

Over the past year, as the conflict between Ukraine and Russia intensified, religion emerged as a proxy for the political struggle. The Kyiv Patriarchate has embraced the Westward-oriented outlook of the Euromaidan movement. Putin and Russian church leaders, meanwhile, have appropriated Orthodox religious motifs in honing a messianic message designed to help justify Russia’s Crimean land grab.

“In recent years talk of [the Kyiv Patriarchate] being schismatic had quieted down. ... Now all that strife is back again,” said Father Vitaly Eismont, a priest who gave up his parish near Ovruch in central Ukraine when switching his loyalties from the Moscow to Kyiv Patriarchate.

The confrontational mood is especially sharp in western Ukraine, where nationalistic feelings tend to be more deeply ingrained than in the east. Believers in several village parishes in western regions, including Soloniv in Rivne Oblast, have forced a change of allegiance to Kyiv over the issue of memorial services: priests loyal to the Moscow Patriarchate reportedly refused to hold such services for those who died fighting on behalf of Euromaidan ideals, inciting the ire of their parishioners. For its part, the Moscow Patriarchate considers those parishes that have switched to have been “usurped” by pro-Western forces.

“The shift in public opinion has been tremendous,” said Frank Sysyn, a professor at the Canadian Institute of Ukrainian Studies in Alberta. “The real crux of the matter... is in the villages.”

The story of Father Serhiy Dmitriev, an Orthodox priest from Kherson in southern Ukraine, helps illustrate the trend. When 2014 began Dmitriev was affiliated with the Moscow Patriarchate, but his allegiance began to waver last spring as the area surrounding his parish became a war zone. The sight of overmatched, ragged Ukrainian troops made a profound impression on him and he volunteered to become a military chaplain for Ukrainian units.

In his new capacity, he found himself driving up to 800 kilometers a day as he criss-crossed eastern Ukraine. Ministering to the spiritual needs of the pro-Ukrainian government combatants was personally fulfilling for him, but it was not something that his superiors could support. When he requested money to buy new tires for his vehicle, he was flatly rejected by representatives of Moscow Patriarchate in Kyiv. “What I heard was, 'we’ve got no money, sorry,'” Dmitriev said.

That incident fed feelings of disillusionment in Dmitriev that had begun to build when leaders of the Ukrainian Church loyal to the Moscow Patriarchate had not spoken out on the corrupt practices of Viktor Yanukovych, the erstwhile president who was ousted amid the Euromaidan protests, or avoided commenting on Russia’s armed annexation of Crimea last February. Such silence, he felt, suggested that the Moscow Patriarchate was putting the Kremlin’s political agenda above the spiritual needs of Ukrainian citizens.

His full conversion to the Kyiv Patriarchate came in the late spring and summer, when the conflict in the eastern Ukrainian regions of Donetsk and Lugansk started taking a heavy human toll. “I see a very concrete political force [...] – I wouldn’t even call it a church – which is working against Ukrainians,” says Dmitriev, referring the the Moscow Patriarchate. “My personal position is that to be part of the Moscow Patriarchate right now is to take part in the killing.”

Father Dmitriev now works in social services for the Kyiv Patriarchate, though he remains affiliated with St. Barbara's, his parish church in Kherson, where a priest displaced by the Donbas conflict helps when he is away. Dmitriev professed to be happy not to be directly involved in politics and able to concentrate on helping people. “When your people are in trouble, to be with them is one of the sacraments,” says Dmitriev, sitting in his office at the St. Michael's Monastery in Kyiv, which gained noteriety last spring when it harbored the Euromaidan protests' wounded. “I want Ukraine to be Ukrainian.”

Rules covering the organization of Orthodox Christian denominations suggest that Dmitriev’s hopes of seeing all Orthodox believers in Ukraine governed by the Kyiv Patriarchate will not be realized any time soon. Regardless of the outcome of the political struggle between Russia and Ukraine, the Kremlin-loyal Moscow Patriarchate seems likely to retain a large role within the Ukrainian Orthodox Church.

The problem for the Kyiv Patriarchate is that it does not currently have official recognition within the broader community of Orthodox denominations. Thus, to gain unchallenged authority over all parishes in Ukraine – or, in Orthodox terms, to become autocephalous -- the Kyiv Patriarchate would need to secure the approval of the Moscow Patriarchate, along with a second blessing from the patriarch of Constantinople. Gaining such approval is unlikely in the foreseeable future.And complicating matters is the existence of a second, unrecognized denomination, known as the Ukrainian Autocephalous Orthodox Church. Prior to 1991, that denomination was the church of the Ukrainian diaspora.

Moving forward, the Kyiv Patriarchate will face a delicate balancing act. Orthodox churches in Russia, Georgia and elsewhere have become bulwarks of “traditional values,” and, as such, find themselves diametrically opposed to social stances embraced by the European Union. The Kyiv Patriarchate, on the other hand, is following the Ukrainian government’s lead in embracing EU ideals.

This positions appears to place the Kyiv Patriarchate in the middle of several divisive debates, including that revolving around Lesbian, Gay, Bisexual and Transgender rights. According to Sysyn, the Canadian expert, the Kyiv Patriarchate will have to appear as “all Orthodox,” and “all European” at the same time.

“[The Kyiv Patriarchate] will never say homosexuality is not a sin, but the question is, where do you place priorities,” Sysyn said.