The only route to Russia runs through Kazakhstan – or China. 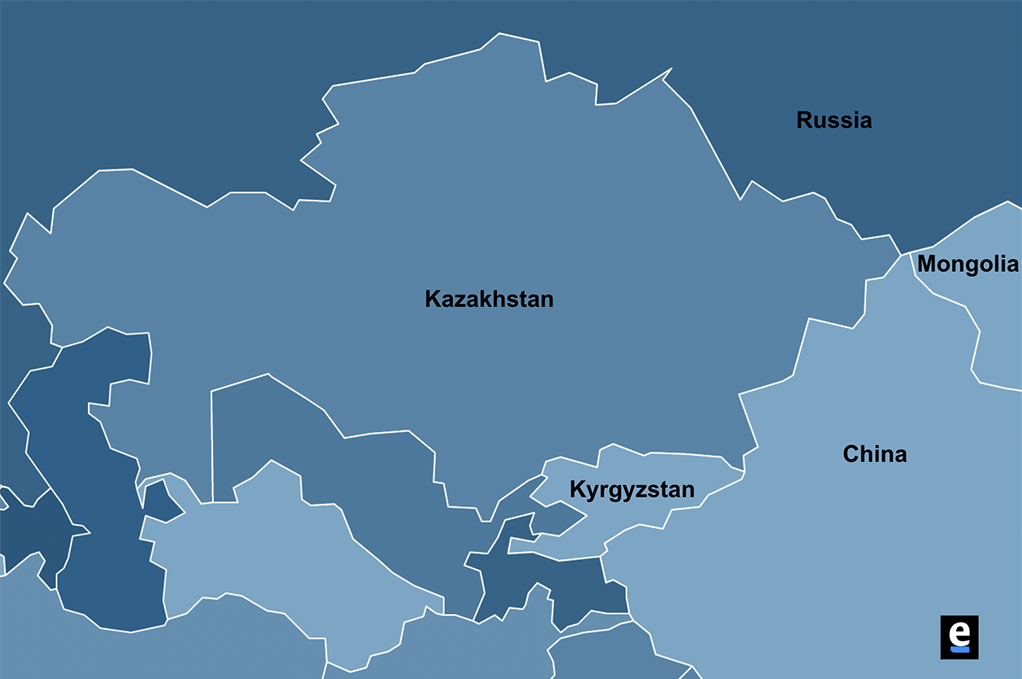 Any Kyrgyzstan-Russia trade must pass through Kazakhstan. (Eurasianet map)

People in Kyrgyzstan are following events in neighboring Kazakhstan with eager interest and appear braced for whatever impact the political unrest is likely to have on their own country’s economy.

At least in terms of security, there is minimal immediate sign of concern. The border service in Bishkek has told reporters that that it will take “appropriate action” if the situation in Kazakhstan worsens.

“The border service … is monitoring the situation in our neighboring country and we are keeping border areas under observation,” the service said.

In an unanticipated hiccup, however, Kamchybek Tashiyev, the head of Kyrgyzstan security services, under whose auspices the border service operates, was this week hospitalized with a suspected case of pneumonia.

Edil Baisalov, the deputy head of the Cabinet, was bullish about the prospect of the need to adopt any precautions.

“In Bishkek, there isn’t the slightest doubt that our brother nation will […] be able to independently resolve all the issues they come up against,” Baisalov wrote on Twitter.

The business community, though, is far less sanguine. Bakyt Degenbayev, the head of the Association of Domestic Producers, told business website Tazabek that what was happening in Kazakhstan would doubtless affect Kyrgyzstan’s economy since it is a transit nation for trade with Russia.

“If the protesters are resolved to go all the way to the end, the crisis in Kazakhstan will, due to the size of the country, drag on. All this will affect our economy. The sooner the people and the authorities get out of this situation, the less our economic ties will suffer,” Degenbayev said.

As it is, Kazakhstan has proven an often-troublesome neighbor, even though it is a fellow member with Kyrgyzstan of a Russia-dominated trading bloc, the Eurasian Economic Union. Nur-Sultan periodically tightens border controls for Kyrgyz exporters, very much in violation of the rules of that bloc, causing huge lines of freight trucks to form on their shared frontier.

“What I would like is that as a result of all the unrest, whatever the outcome may be, all the misunderstandings between [Kazakhstan and Kyrgyzstan] would be removed and that the process of doing business between the Kyrgyz Republic and the Russian Federation and passing Kazakhstan’s territory grow simpler,” Degenbayev said.

Nydyr Toktorov, director of Aidoochu Koom, a truckers’ lobby, told Eurasianet that his colleagues are not overly nervous about the prospect of the border being closed. Truckers have become so used to having to wait at the customs checkpoint for days on end, he said, that a repeat occurrence occasioned by political unrest will be nothing new.

“The Kazakhs have repeatedly closed the border before. If they shut it down this time, it will be for a week, or at most 10 days,” he said. “They close their border twice a year as it is.”

Igor Golubev, the deputy chairman of the Independent Trade Union of Truck Drivers, also sees little danger of deliveries of essential goods from abroad being troubled by the unfolding situation in Kazakhstan, which shares a 1,200-kilometer border with Kyrgyzstan.

“Freight trucks travel on the outskirts of cities, not through [city] centers. In the places where trucks are going, there are hardly likely to be demonstrations,” Golubev said. “Freight traffic will not be constrained. We saw that during the pandemic, we’ve had a lot of situations like this. I see no grounds for worrying.”

Even if basic goods get through, there is no certainty prices will not be affected. And this just as inflation is already causing pain to low-income earners in Kyrgyzstan, one of the poorest countries in the former Soviet space. Some of the important staple items coming from Kazakhstan and Russia include meat, grain, sugar and sunflower oil, Rustam Baltabayev, the director of the Association for the Development of the Agro-Industrial Complex, told Eurasianet.

“If the situation escalates and worsens, then this will definitely affect prices and the availability of goods,” Baltabayev said. “The fact that it is winter makes the situation worse than if it were the summer.”

Logistics professionals say they have long been lobbying for the government to explore an alternative transportation corridor between Kyrgyzstan and Russia that would bypass Kazakhstan.

“The business community has several times raised the idea of having several transport corridors so that our country would not be so strongly dependent on external factors. I think that the current situation will push the government to take further steps,” Gulnara Uskenbayeva, the president of the Association of Freight Companies, told Tazabek.

One alternative transit route, albeit a highly complicated one, floated by Kyrgyz exporters envisions goods being transported through China, into Mongolia and then across that country’s border into Russia.