Activists and state scientists say that environmental legislation is being trampled, not for the first time. 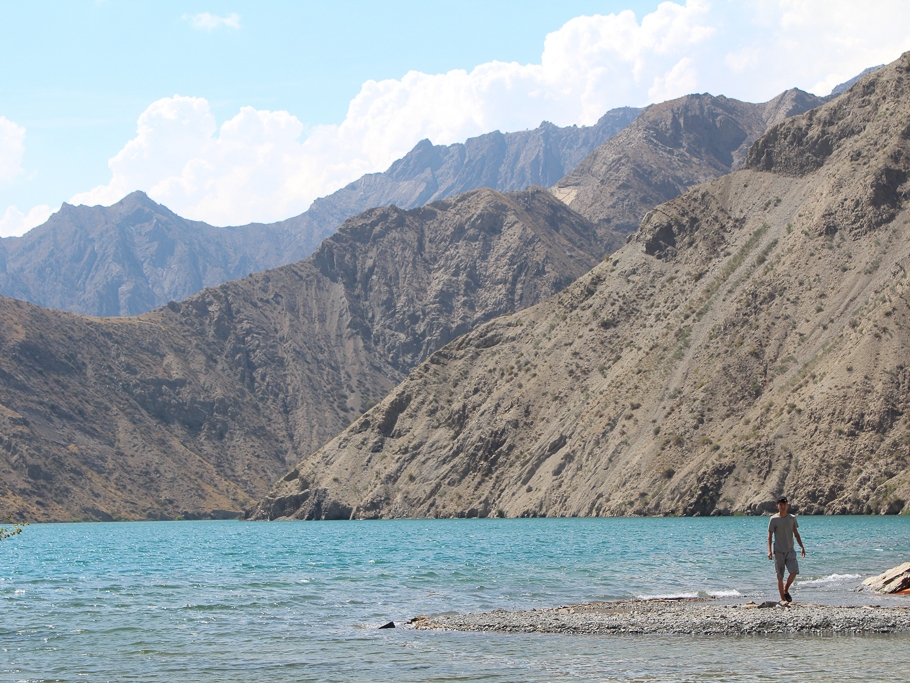 Villagers say they are unwilling to trade their pristine environment for a convenient road. (Photos by Aigerim Turgunbaeva)

Kyzyl-Beyit, a settlement of around 600 people in the southwestern region of Jalal-Abad, is hard to reach even by the standards of rural Kyrgyzstan.

The fastest route to the village from the provincial town of Tash-Kumyr involves a trip across a man-made reservoir by rowboat or a makeshift ferry that villagers built to transport their livestock.

On the other side, horses-for-hire take visitors a further 8 kilometers through a steep gorge strewn with peach and apple and berry trees and junipers embellished by wild grapevines.

It is this fragile ecosystem and the pastoral way of life that locals and activists say is being threatened by a Chinese company that is building a road nearby to service a future mine and a gold processing plant. 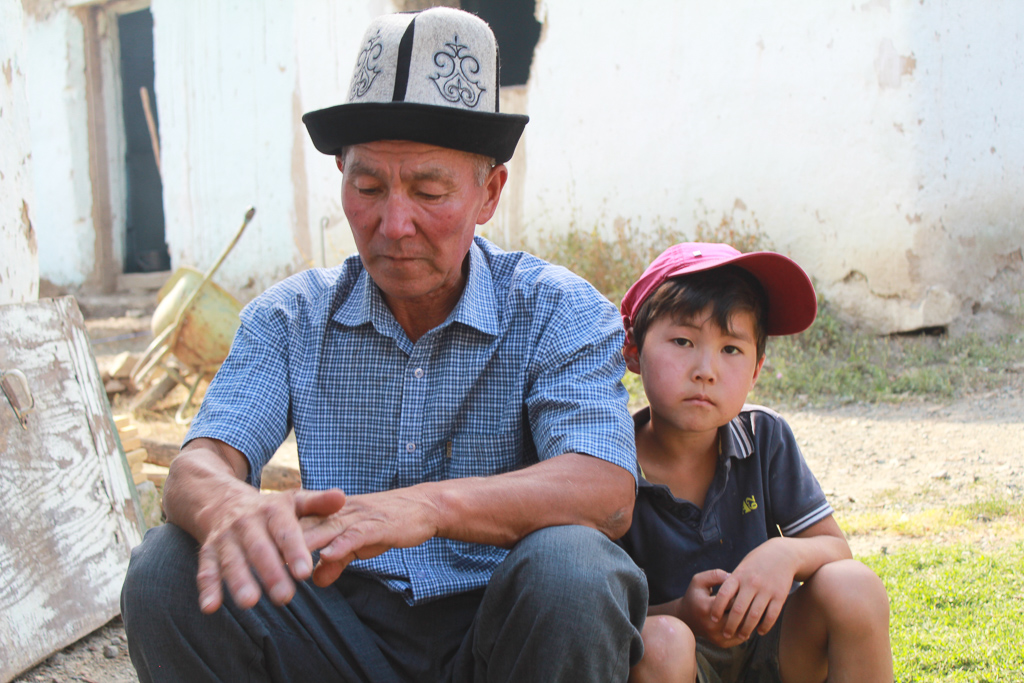 For 62-year-old Temirbek Ramanov, whose grandchildren are the fifth generation of his family to live here, the stakes could not be higher.

“Everything was fine before the Chinese came. As you can see, it isn’t easy to get to us, but for us there is no better place,” said Ramanov, tearful under a traditional felt kalpak, his red baseball cap-sporting grandson squatting on the ground beside him.

“We have lived our lives, but what of our grandchildren and their children?”

Ramanov’s wife, Toktayim, offering around a bowl of freshly picked berries, quoted a popular Kyrgyz proverb: “Where there is gold, there is a snake.” 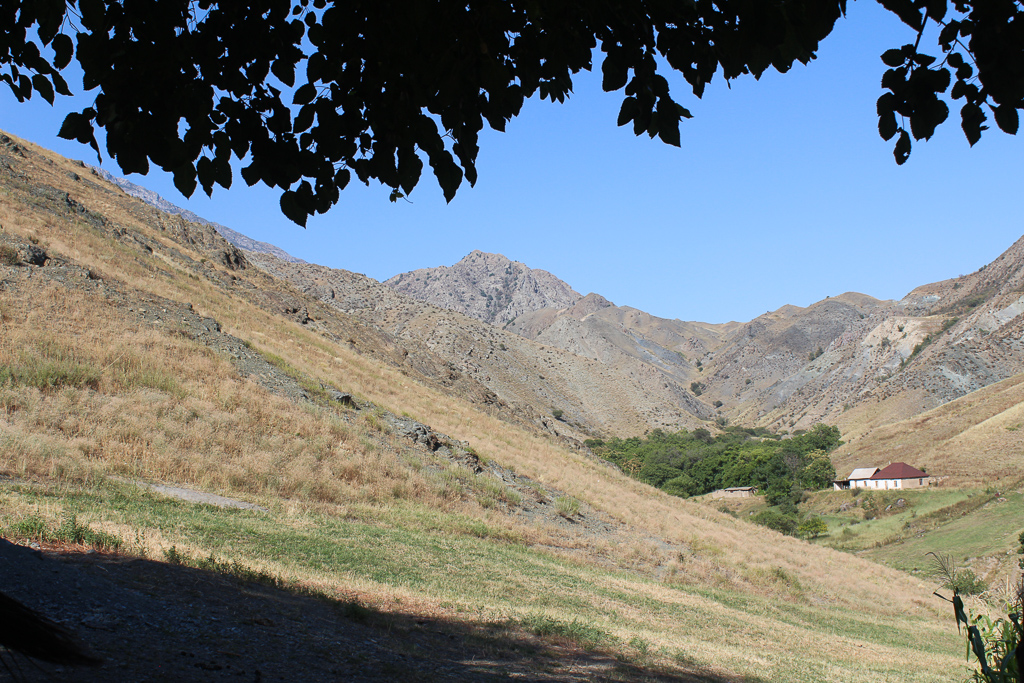 Accounts provided by Kyzyl-Beyit residents of Oriel Gold’s sudden arrival in their neighborhood in 2019 echo laments in mining-affected communities across Kyrgyzstan, where projects rarely escape conflict.

Consultations with the community on the future of a highland pasture called Tokhtazan began only after Oriel Gold had secured a long-term license for the deposit.

At community meetings, Ramanov said, Oriel Gold representatives promised to build a bridge across the reservoir and extend electricity into Kyzyl-Beyit, where solar panels presently provide the only source of power.

They even promised a health clinic with an on-duty nurse.

According to Ramanov and several other Kyzyl-Beyit residents who spoke to Eurasianet, the company initially pledged that ore extracted at Tokhtazan, where residents of three villages graze their livestock, would not be processed in the area.

The company later acknowledged that it was, in fact, building a plant that would be situated above Tokhtazan, closer to the source of glacial streams that flow through the villages before reaching the Naryn River. 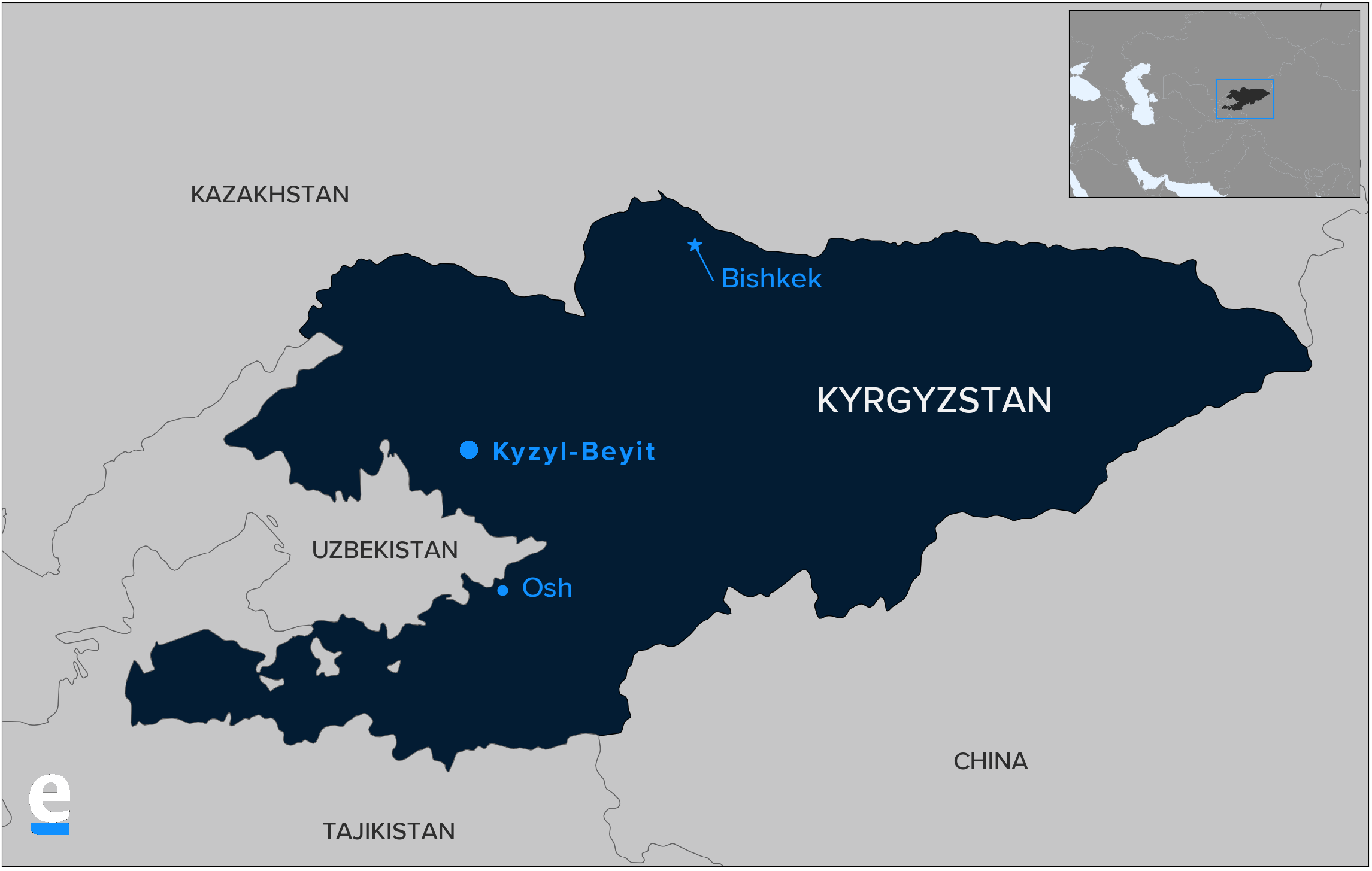 The larger company has a limited internet footprint but appears on a list of firms with overseas investment filings on the Inner Mongolia Department of Commerce’s website. It is also listed on Qichacha, a database of Chinese companies, where it is shown to have a registered capital of 67 million yuan (just under $10 million).

Eurasianet’s efforts to contact the company via a local representative and through the office in China’s Inner Mongolia region did not yield a response.

Residents of Kyzyl-Beyit said the last time they heard from the company was over a year ago.

The economies of such regions depend almost entirely on livestock farming. Mining can entail dramatic disruptions to land-use patterns.

The use of cyanide in the process of gold recovery is another major concern, amplified by a spill into a river in 1998, during the first year of operations at Kyrgyzstan’s largest gold mine, Kumtor.

Jyldyzbek Koshaliyev, an activist in Kyzyl-Beit who broke off a stint working in Moscow to assist locals opposing the company told Eurasianet that he feared “cyanide will be discharged into waters” that the villagers use. 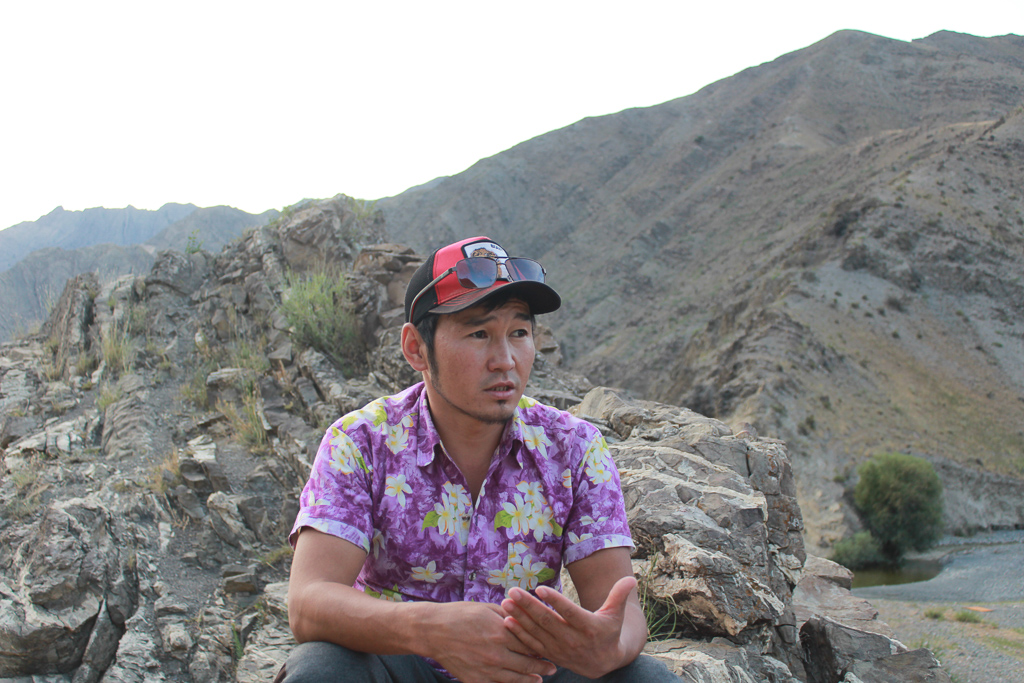 During one meeting, Oriel Gold tricked 51 villagers into signing a document in support of its activities, Koshaliyev alleged.

The villagers had thought they were merely confirming their attendance at the meeting, he said.

Gamal Soronkulov, a Bishkek-based ecologist and co-author of ecomap.kg, a map of environmental stress around Kyrgyzstan, told Eurasianet that the planned position of the plant made some form of river pollution likely.

This region’s ecosystem is “rich, but very delicate,” Soronkulov said.

“It should be turned into a protected area. Instead, it faces environmental collapse.”

Gold and the conflicts around it have been a big part of the story of Kyrgyzstan’s 30-year independence.

Current leader Sadyr Japarov earned popularity and a prison sentence during his time as an opposition figure agitating against Kumtor’s Canadian management.

After taking power in 2020 he oversaw the effective nationalization of Kumtor, and his government moved to expand state control over mining as a whole.

But that hasn’t put a stop to related unrest.

This summer, in an ironic turn, Japarov demanded punishments for people he referred to as “fake patriots” stirring negativity around a potential mining project.

In Kyzyl-Beyit and other villages of the district of Aksy, opposition to mining is driven less by politicking in the distant capital and more by the plight of the neighboring Chatkal district, where British, Chinese and Turkish companies all operate working mines.

Claims of ill health among children and ruined ecology in the district appear from time to time in the press, and rumors travel quickly from one community to the next.

Ramanov told Eurasianet that he had heard children are “born weak” in Chatkal, and that he did not want the same to happen in his area.

To date, there have been no comprehensive studies on health changes among mining-affected populations in Kyrgyzstan.

So far Kyzyl-Beyit residents’ attempts to have Oriel Gold’s license revoked via appeals to the government – both at local and national levels – have fallen flat.

Their hopes rest largely on a conclusion delivered by an expert from the state-run Academy of Sciences late last year that the company violated legislation in the process of acquiring its permits by failing to carry out an archeological survey of its license area.

The Academy has also concluded that the company may be responsible for the destruction of rare trees in its project area, where it has allegedly cut into forested areas to build a road.

Soronkulov, the ecologist, was part of an impromptu commission including experts from the Academy that visited the area last year.

The commission documented with help from locals nearly a thousand Rowan trees – a berry-bearing mountain ash listed in Kyrgyzstan’s red book of endangered species – in the area where Oriel Gold is planning an open pit mine.

Soronkulov said that the company claims to be in possession of a government document attesting to the absence of Red Book flora and fauna in its license area.

“Everything is decided in backdoor negotiations, corruption schemes,” he alleged.

The potential presence of vested political interests in the project will likely make it more difficult for locals to stop Oriel Gold’s plans.

Koshaliyev, the activist, told Eurasianet that villagers have yet to receive a response to their appeals this summer to a parliamentary committee and to the speaker of parliament.

The speaker is Jalal-Abad-born Talant Mamytov, whose family has in the past been linked by investigative journalists to Chinese investments in the gold sector in Chatkal.

“I plan to return to Moscow someday,” Koshaliyev said. “But only after we have saved Tokhtazan.”