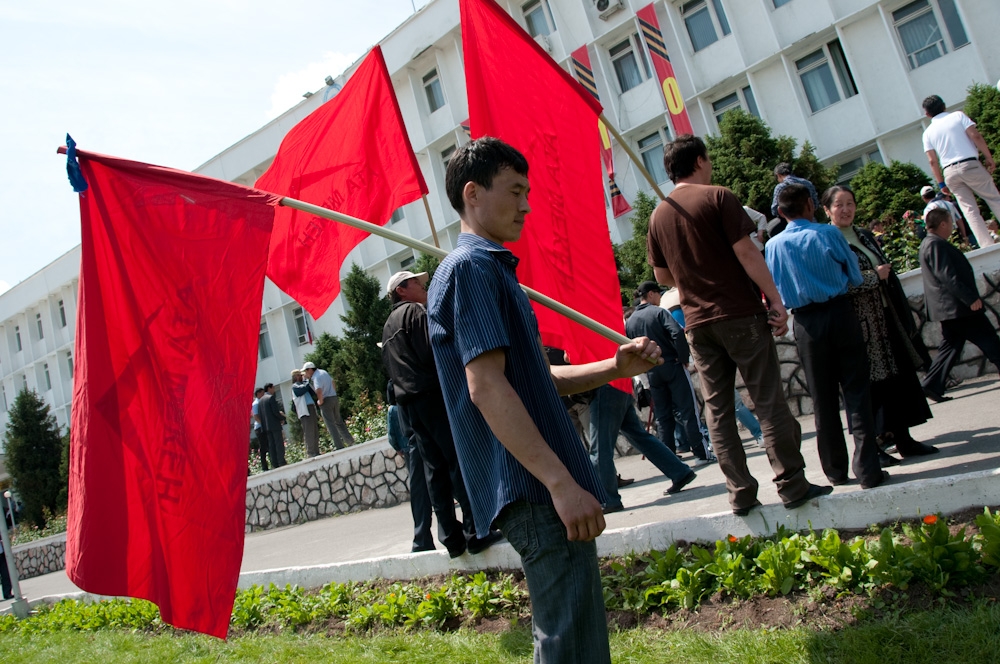 Clashes in southern Kyrgyzstan on May 14 left at least one person dead and 63 wounded. The political violence came as the provisional government in Bishkek reasserted its authority in the South less than 24 hours after supporters of former president Kurmanbek Bakiyev seized government buildings in three regional capitals.

In Batken, Jalal-abad and Osh, provisional government supporters regained control of local political institutions, restoring governors to power who had been driven from their offices the previous evening. [For background see EurasiaNet’s archive]. Followers of the Ata-Meken Party, a member of the provisional governing coalition, spearheaded the efforts in Osh and Jalal-abad to put down the pro-Bakiyev uprising.

By evening, the provisional government had deployed Interior Ministry troops and Army special forces to maintain order in Osh, southern Kyrgyzstan’s largest city. A sense of relative calm settled over both cities by nightfall. In one neighborhood on the outskirts of Jalal-abad, outdoor cafes were filled with people.

Earlier in the day, Jalal-abad had been the scene of intense firefights. At least 26 people sustained gunshot wounds, local news outlets quoted Ministry of Health representatives as saying. The street battles involved hundreds of partisans on both sides, armed with everything from rocks to Kalashnikov automatic rifles and Molotov cocktails.

Jalal-abad’s regional administration building, in which Bakiyev supporters had holed up for a good portion of the day, suffered extensive damage.

Late on May 14, Defense Minister Ismail Isakov arrived in Jalal-abad to hold security consultations with Asanov.

In the capital Bishkek, leading figures in the provisional government were quick to blame Bakiyev, along with his family members and political allies, for fomenting the trouble. [For background see EurasiaNet’s archive]. Speaking at a May 14 news conference, General Prosecutor Azimbek Beknazarov announced that Usen Sydykov, a former Bakiyev aide, had been arrested on charges of organizing the southern uprising. The provisional leadership is in possession of phone recordings that allegedly catch Sydykov issuing instructions concerning the take-overs of government buildings in Osh and Jalal-abad, Beknazarov said.

Meanwhile, Keneshbek Dushebaev, the provisional head of the State Committee for National Security, insisted that the former president’s son, Marat Bakiyev, along with Bishkek’s former mayor, Nariman Tuleev, were financing the uprising in the South, according to a report distributed by the 24.kg news agency. Dushebaev also castigated Kazakhstan, alleging that officials in Astana were aware that the younger Bakiyev and Tuleev were in Almaty, and were not willing to apprehend them and extradite them back to Kyrgyzstan, 24.kg reported.

Beknazarov cautioned that Bakiyev elements were also trying to destabilize the capital. “Followers of the ex-president are giving money to residents of Bishkek, calling them to organize mass unrest,” Beknazarov said in public comments.

While the provisional government has regained the helm in southern provinces, its ability to govern remains tenuous, some experts say. They point out that the reliability of security forces in southern provinces remains a big question mark. Police officers and Interior Ministry personnel who were ostensibly loyal to the provisional government offered feeble resistance, and in some instances stood aside, when Bakiyev loyalists stormed government buildings on May 13.

“This is a major point of concern. The regime has no grip on the country, they are relying on factions to retain informal support,” Paul Quinn-Judge, the Central Asia Project Director for the International Crisis Group, told EurasiaNet.org.

In an indicator that the situation in southern provinces remains volatile, five homes reportedly belonging to Bakiyev family members in the village of Teyit, in the Jalal-abad Region, were set on fire late on May 14 by a mob of about 100, the AKIpress news agency reported.