Kyrgyzstan: A stranded village on Tajik border struggles for survival 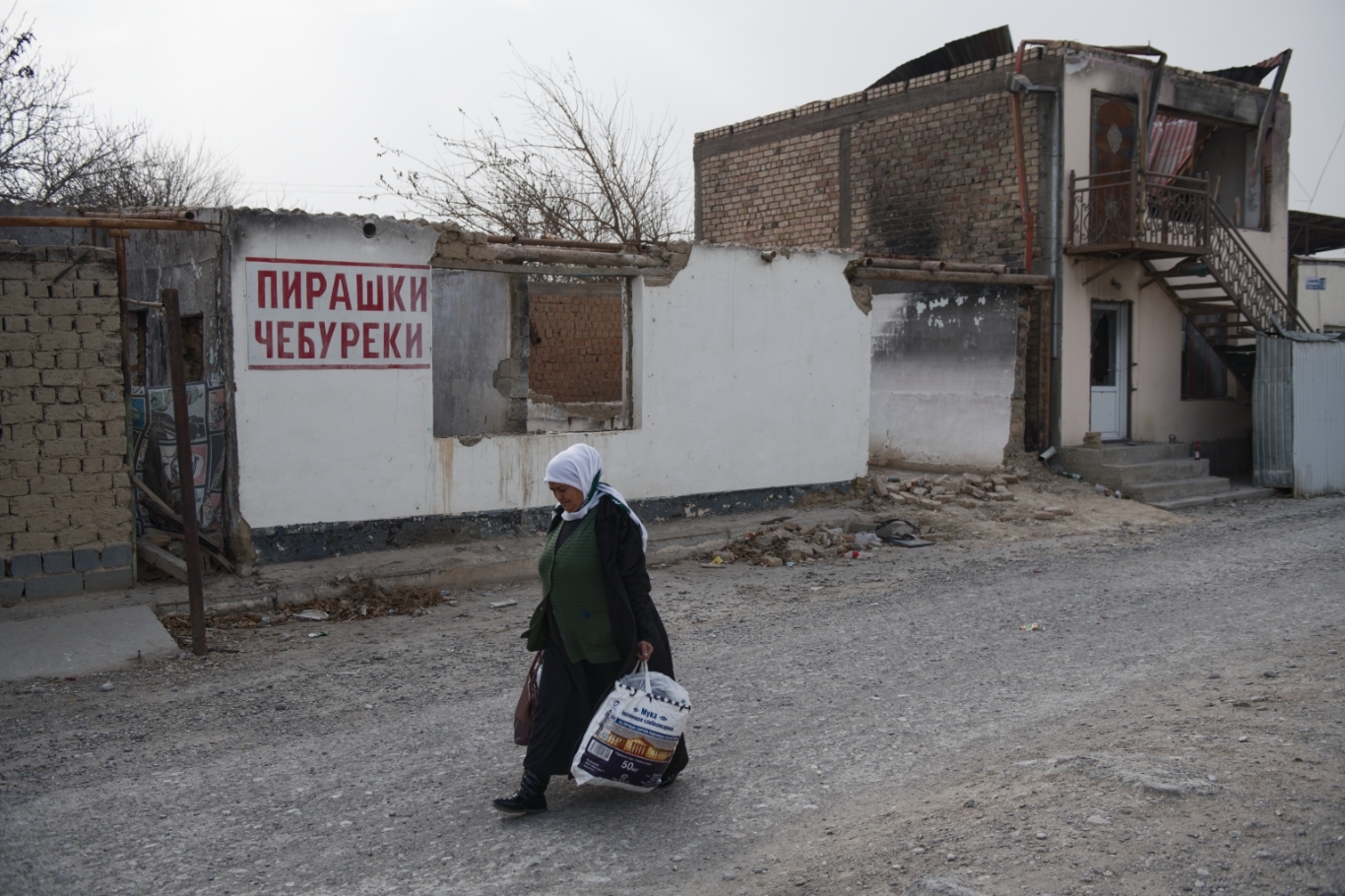 A woman walks past destroyed buildings in Arka. (photos by Danil Usmanov)

A ghostly silence has descended over the burnt-out gas stations of Arka. It’s been that way since the deadly violence that broke out in late April. There are no imminent plans to rebuild them. And the town is slowly emptying.

This spot is an anomaly. The cars, buses and trucks speeding along the road in front of the 10 or so disused gas stations almost all have Tajikistan plates. Arka itself is part of Kyrgyzstan, but there is no boundary to mark where one country begins and the other ends.

In calmer times, Tajik drivers arrived in numbers to fill up with the relatively cheaper fuel on sale there. By doing so, they were in effect unlawfully crossing an international border, albeit one that has yet to be fully defined, but the rule-breaking suited everybody. The word coming from above is that things must now change.

“None of the gas stations are working, because our country’s leadership has forbidden it,” Abdylbek Abdullayev, the owner of an auto parts shop in Arka, told Eurasianet. “Until the border is demarcated, it will probably stay that way.”

Abdullayev said he wants to leave as soon as he can afford it.

“As soon as I get the chance, I’ll get out of here. It’s dangerous to live here. Our neighbors are constantly threatening us – drones fly overhead, tanks drive past. I don’t want to live like this,” he said.

There is something ostensibly inexplicable about why Arka came to be attacked by groups of firebomb-wielding Tajik irregulars in the first place.

The conflict that started unfolding on April 28 was triggered by events far to the east of Arka, in another part of the Batken region. It began with a squabble over use of a water intake facility that splits a river in two. Local populations on both sides of the border depend heavily on farming and so access to irrigation resources is fiercely contested. Border guards were almost immediately embroiled in the fighting. The scale of fatalities and damage on the Kyrgyz side strongly indicate that Tajik government forces were more than ready for the battle.

Swathes of Kyrgyz civil society contend in no uncertain terms that this episode was nothing more than a premeditated attack aimed at resolving border disagreements by military means. Wary of rocking the boat, officials in Bishkek are coy about making the same case. Tajik officials have been circumspect on the whole subject. 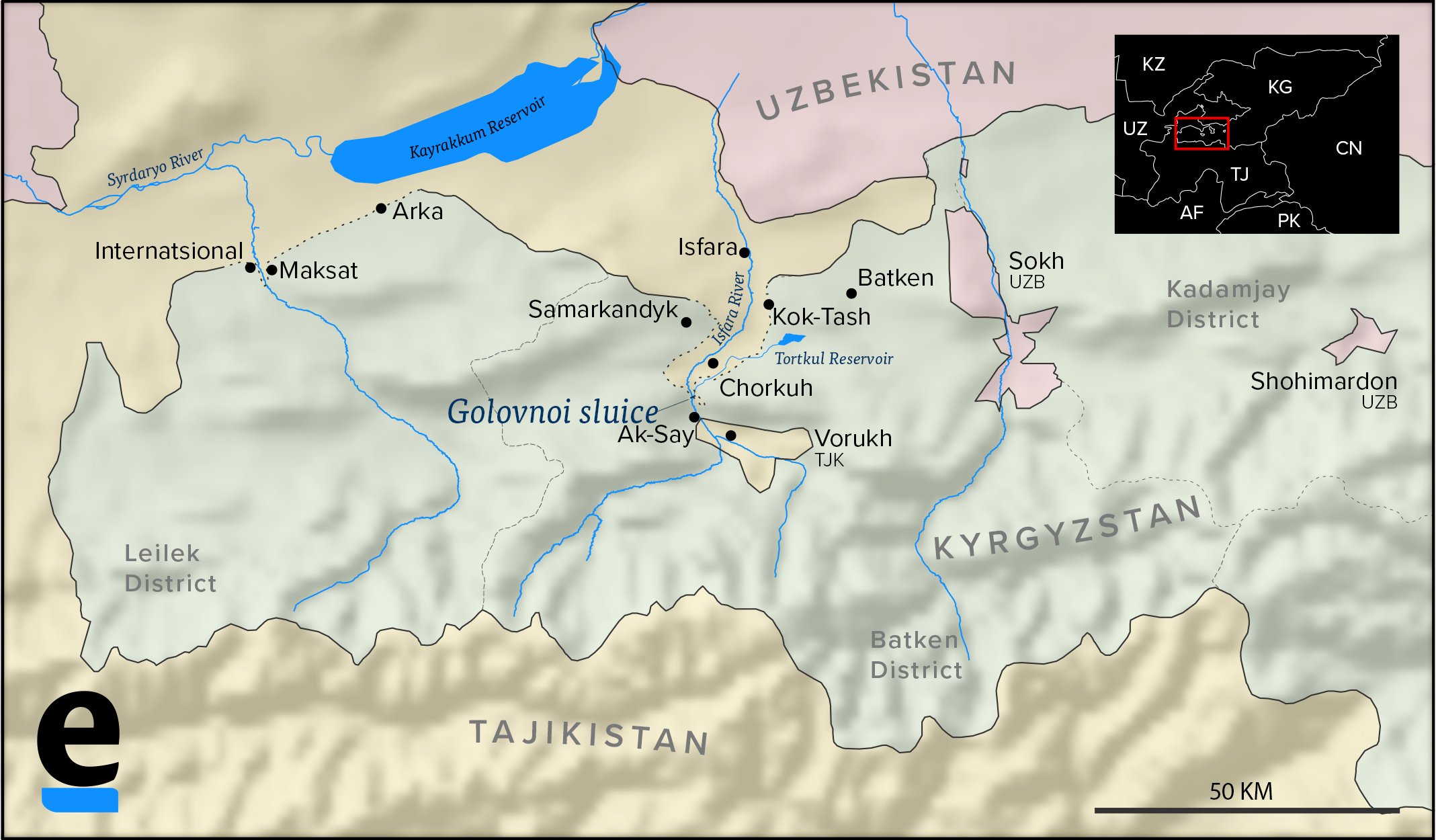 Death of a market town

What happened in Arka had nothing to do with water, though. The town is 60 kilometers away from the water intake facility as the crow flies, and the mountainous terrain and layout of international borders means that it can take several hours to drive from one location to the other. And yet, while Arka is heavily isolated from the rest of Kyrgyzstan, it is a 30-minute drive from Tajikistan’s second-largest city, Khujand, along a flat, straight road.

These geographical realities have yoked cross-border communities in a collective existence often characterized by mutual benefits. Arka bazaar, for example, operates every Tuesday and was once freely used by citizens of both nations.

“The Tajiks brought us carrots, potatoes, herbs… we sold them our dry apricots and mung beans.” Karim Oibalayev, who was head of the Arka town council until earlier this year, told Eurasianet. “We used to live well with Tajikistan before, we never had any conflicts.”

The price of Kyrgyz gas was also attractive to Tajik motorists, which explains the former abundance of gas stations in Arka. Current levels illustrate the difference neatly. Where low-grade AI-92 gasoline in Kyrgyzstan now sells at about $0.65 per liter, Tajiks must pay almost $1 for the same.

The degree of symbiosis between the communities thus strains the credibility of any hypothesis about the arson and gunfire having been trained upon Arka as a result of enraged solidarity with fellow Tajiks.

Theories in affected Kyrgyz communities have varied and evolved over the months. Animus in the early days was reserved to a great extent for the person of Tajik President Emomali Rahmon. And few are in any doubt that Tajik government troops and associated irregulars were involved in perpetrating or enabling the violence. 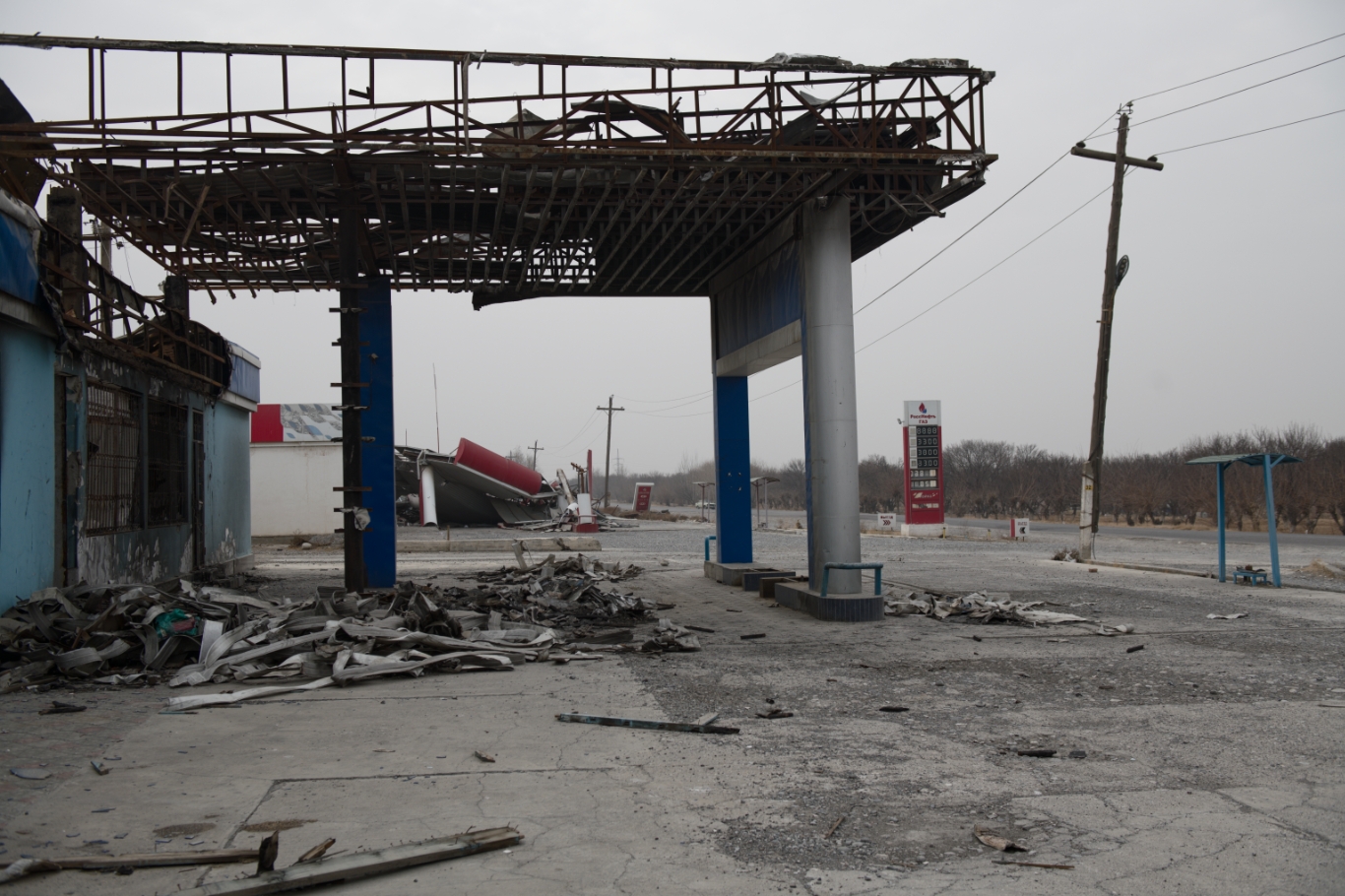 Kyrgyzstan’s reaction to events in the Batken region has been strongly marked by reluctance to pursue further confrontation with Tajikistan. The strategy has instead been centered on selective reconstruction and improving links with peripheral settlements like Arka.

“A total of 17.5 kilometers in the region have been paved, including an 11.3-kilometer section of the Kulundu-Maksat-Arka road in the Leilek region,” President Sadyr Japarov said in an interview last month.

A Eurasianet reporter present in Arka around the time of the conflict and at the start of December confirmed that the road to the town had indeed improved, considerably shortening the length of the voyage from the nearest mid-sized town of Isfana. 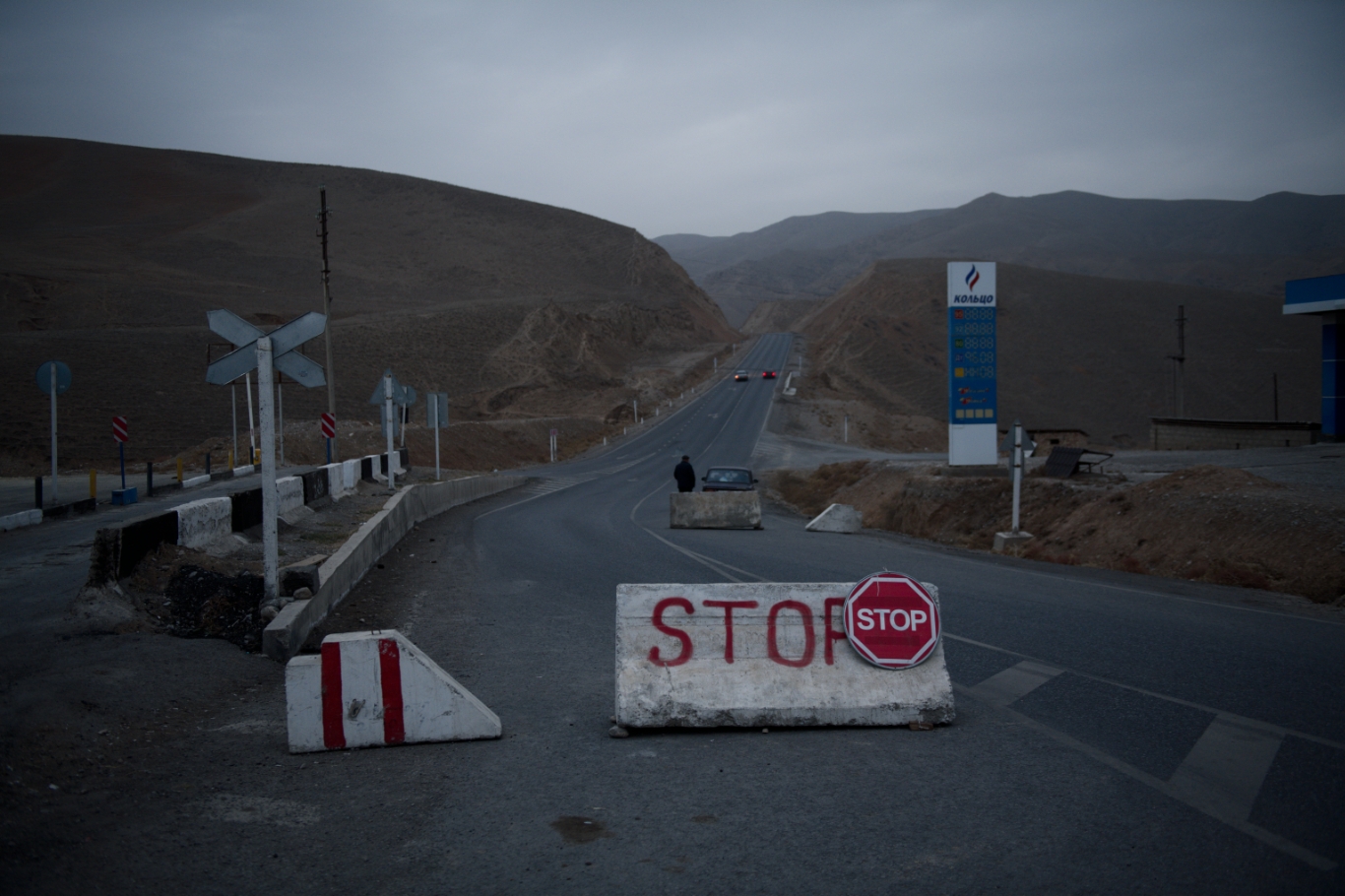 Digital services provider ElCat in May even announced that it had begun extending its fiber-optic telecommunications network to Arka and several other settlements affected by the unrest. Beneficiaries of high-speed internet connections in limitrophe Kyrgyz villages will be the envy of nearby Tajiks, who must still contend with often-dismal telecommunications services.

In the village of Maksat, not far from Arka, new dwellings have been built with support from Turkey on the exact site where homes were destroyed by mortar fire.

But the degree to which the Kyrgyz government appears intent on depriving the Tajiks of a pretext to initiate fresh hostilities risks of undermining its own vision of making border areas viable. The decision to forbid the reopening of gas stations in Arka, and to discourage any kind of trade along the Tajik through-road in fact, has cast a dispiriting pall over the place. The owner of a notary’s office destroyed in April complained that he had been provided with what he considers only a paltry 200,000 Kyrgyz som ($2,300) to rebuild.

“You couldn’t even build a toilet with that amount of money,” he said.

There are four checkpoints between the district capital of Isfana and Arka. Cars are typically waved through, but larger vehicles may be inspected. This is because Arka residents bringing in large quantities of groceries and other items from outside are required to first procure a letter of authorization from the town council.

“If I need coal, I need to get a letter for that too,” one middle-aged male Arka resident told Eurasianet on condition of anonymity. “The soldiers say it is to stop contraband getting through. But what contraband? We have to live somehow, don’t we?”

He and several others confirmed that some motorists have had unapproved goods confiscated by troops manning the checkpoints.

The logistics around gasoline have likewise made things more uncomfortable. Charred displays at Arka’s filling stations are a snapshot of a better time, showing prices not too different from those in the capital, Bishkek. But Arka’s motorists must now buy gasoline from middlemen out of buckets at rates of around 72 som ($0.85) per liter.

Anxieties around contraband and the perceived benefit it could bring to people in Tajikistan rouse passions in distant Bishkek. Only this week, lawmaker Kanatbek Akhmedov alleged that Kyrgyz coal was being sent into Tajikistan, thereby depriving Kyrgyz customers of the fuel. 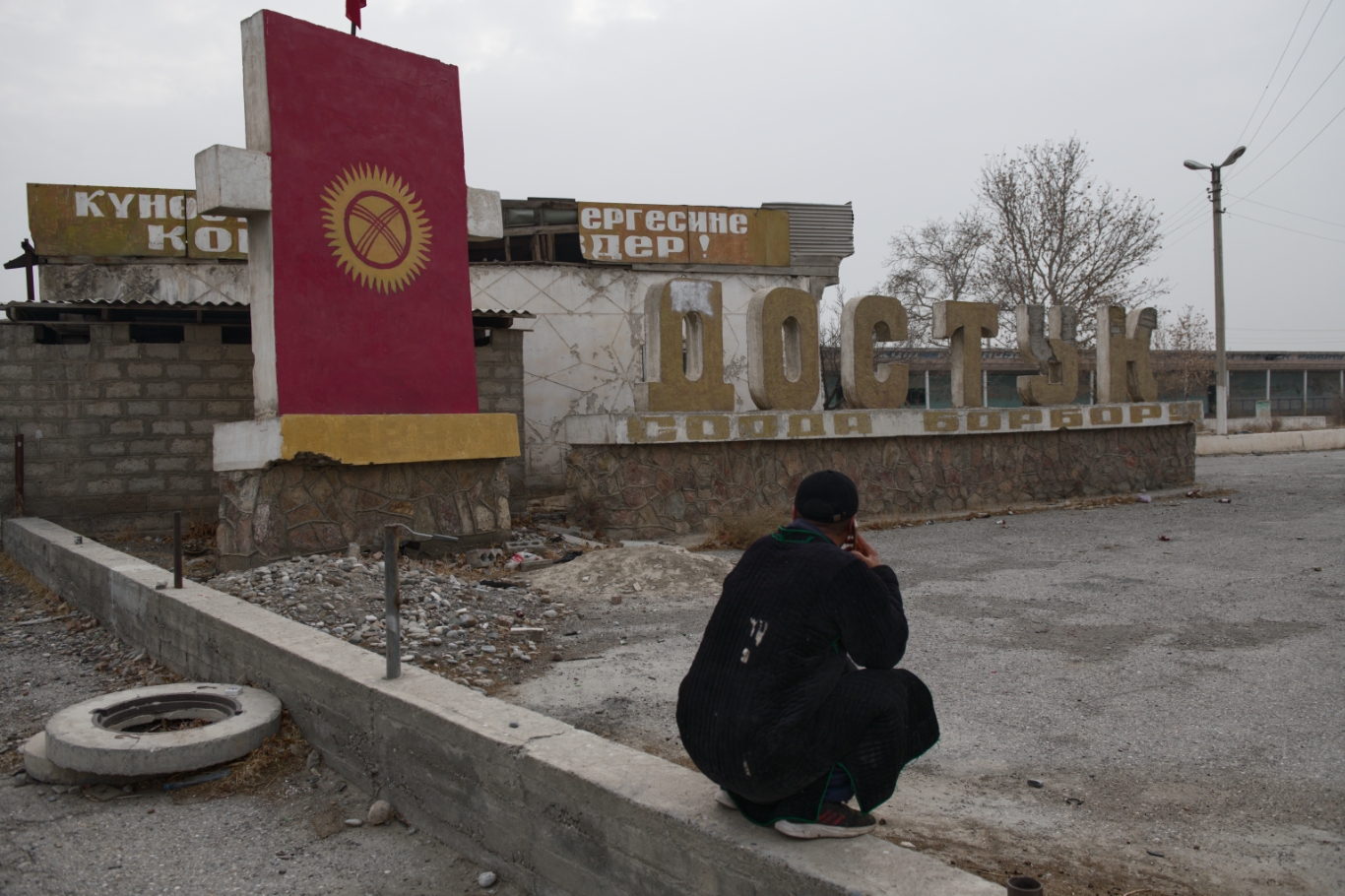 The way that Arka and its environs are being policed by law enforcement and military forces of both governments is doing little to soothe nerves. Residents say it is precipitating a slow-motion process of ethnic cleansing.

Kyrgyz border troops steer a wide berth of the Tajik through-road, evidently out of a willingness not to be seen as provoking their Tajik counterparts. A pair of local policemen grumbled to a Eurasianet correspondent that they have been lumbered with the task of keeping an eye on the area.

In early November, the Kyrgyz border service, which operates under the auspices of the State Committee for National Security, or GKNB, reported that one of its men came under assault from Tajik border guards on a stretch of road near Arka.

“A Kyrgyz GKNB border serviceman tried to perform a turn in his Honda Accord. As he was maneuvering, five Tajik servicemen threw stones at the car. They also made an unsuccessful attempt to detain him,” the service press service said. 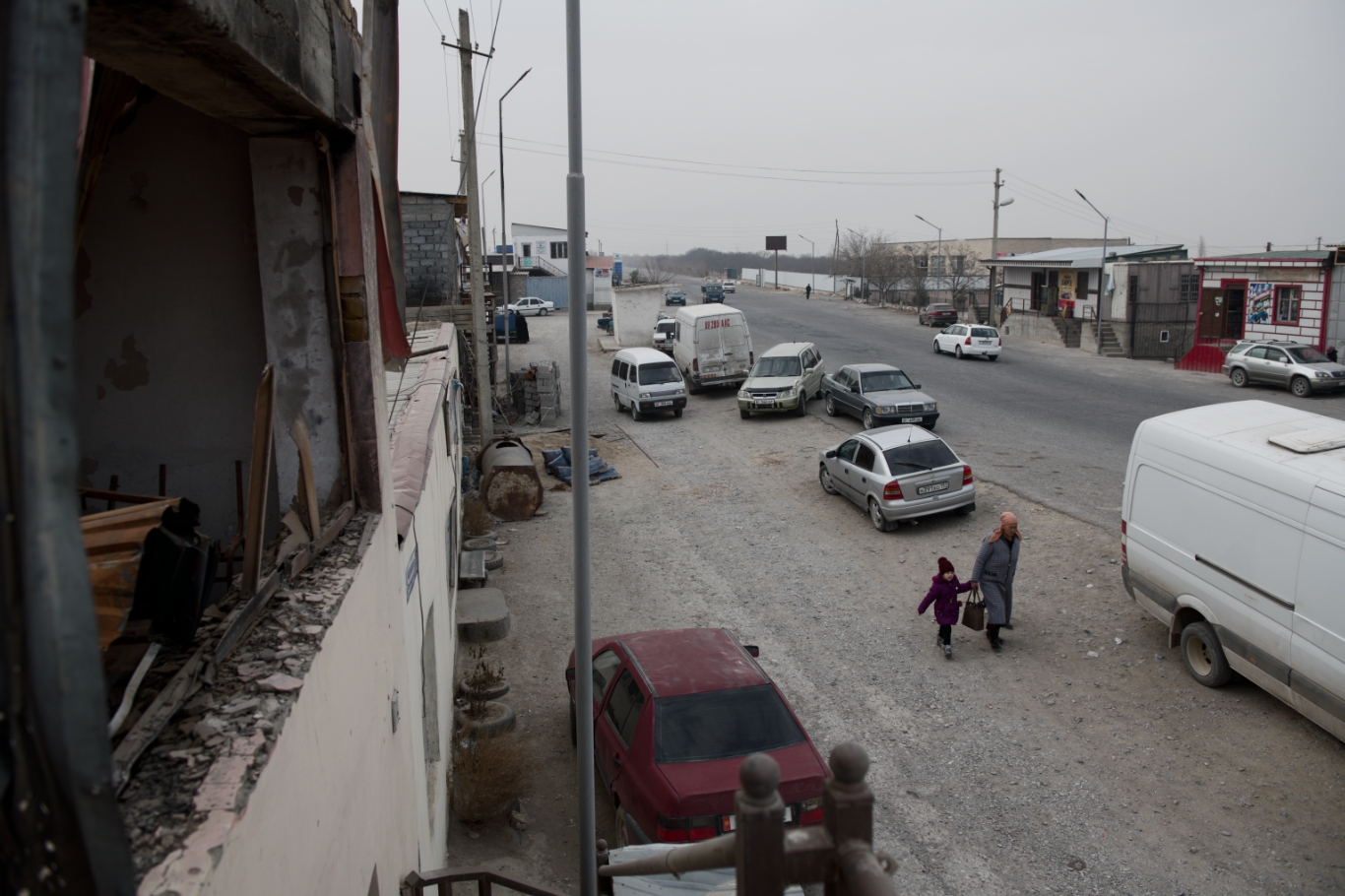 The job of policing the border town is tricky because, despite everything that has happened, there is still some sporadic and very small-scale, unauthorized trading taking place, apparently to the chagrin of Tajik security officials. Minibuses with Tajik plates regularly disgorge passengers, usually female, at a bus-stop across the road from a cluster of Kyrgyz grocery stores.

Arka residents pointed out several surveillance cameras installed on tall poles on Tajik territory that they said were there to check on nonapproved movements across the non-demarcated border. Some also alerted Eurasianet to an unmarked white Daewoo Nexia sedan performing numerous circuits of the area that they claimed was carrying a squad of Tajik security service officers trying to detect or deter transgressors. Anybody so much as putting one foot on the wrong side of the road is liable to be snatched up by Tajik border guards, they said.

The situation is especially trying for residents of the overwhelmingly ethnic Kyrgyz village of Chigdalik, which is 10 kilometers east of Arka and well inside Tajikistan. Many people from Chigdalik had long grown used to regularly visiting their relatives in Kyrgyzstan proper.

“They won’t let anybody come into Kyrgyzstan. Even if they just come to do some shopping, they can have big problems,” Izzat, a female Arka resident who moved from Tajikistan several years ago, told Eurasianet.

Chigdalik is relocating en masse because of this alleged harassment from Tajik security services.

“Absolutely everybody is abandoning their homes and coming to Kyrgyzstan,” Izzat said. “There are maybe 50 people left there. And it used to be a big village.”

Arguments will rage for years about who started the April troubles and why. But the consequences of what happened are unambiguous. Ethnic boundaries are hardening, resentments are intensifying.

“People have started looking at each other differently,” said Abdullayev, the auto parts store owner, referring to relations between Kyrgyz and Tajiks. “I don’t want to live like this or have anything to do with them.”