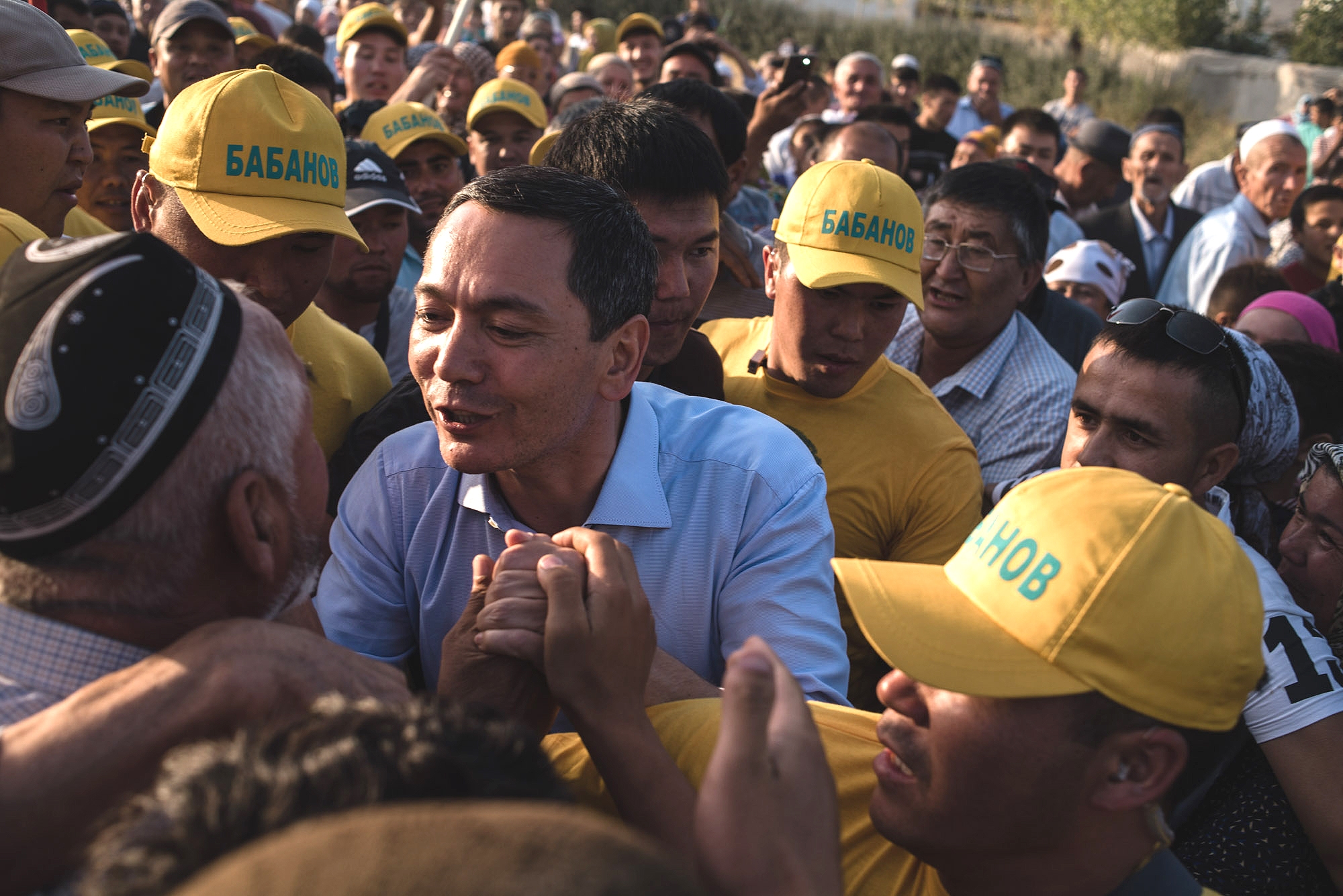 Omurbek Babanov, a candidate in Kyrgyzstan’s upcoming presidential election, meeting with voters at a rally in the town of Aravan on September 14, 2017. (Photo: Danil Usmanov/EurasiaNet.org)

Kyrgyzstan is brimming with indignation at what it perceives as the meddling of neighboring Kazakhstan in its upcoming presidential election.

On September 19, the office of Kazakhstan’s President Nursultan Nazarbayev announced he had met for talks in Astana with Kyrgyz presidential candidate and multimillionaire businessman Omurbek Babanov. The meeting was given wide coverage in Kazakhstan’s media.

“I have known you for a long time. You have been doing business and gained great experience. You were head of the government,” Nazarbayev said, speaking in Kazakh and referring to Babanov’s stint as prime minister from December 2011 to September 2012. “I remember all this.
If the Kyrgyz people will throw their support behind a person like this, a person like you, then Kazakhstan will also throw its weight behind that person at any time. And I hope this doesn’t offend anybody.”

Alas, somebody was offended.

Babanov is the only credible alternative in the October 15 vote to Sooronbai Jeenbekov, the ruling party’s handpicked would-be successor to President Almazbek Atambayev, so the reaction was predictably fiery.

“Even though the leader of our friend-nation Kazakhstan stated that he does not interfere in the internal affairs of Kyrgyzstan, his words clearly demonstrate Kazakhstan’s preference as regards the future president of Kyrgyzstan,” the Foreign Ministry in Bishkek said in a statement.

Driving its point home, the Foreign Ministry explicitly described Nazarbayev’s meeting with Babanov as an “attempt to influence the choice of the people of Kyrgyzstan.”

Kazakhstan’s diplomats quickly fired back with an equally rancorous note.

“Meetings between the head of state and high-profile political figures and leaders of political parties, organized at their request, take place on a regular basis and are entirely fitting with international practice,” the Kazakhstani Foreign Ministry said.

This latter statement was disingenuous, to say the least. The encounter between Nazarbayev and Babanov was covered in Kazakhstan’s media in such a way as to almost look like a meeting between fellow heads of state.

Support from Nazarbayev may prove a boon to Babanov on some level, but it could just as easily backfire.

Babanov’s critics enjoy bringing up the fact that he was, at one stage, actually a citizen of Kazakhstan — the kind of detail that can usually be relied upon to rile a certain type of nationalist voter. The fact that Babanov has an ethnic Kazakh wife is only so much more
grist to the chauvinist mill.

The issue appears to have arisen because of a problem experienced by many former Soviet citizens seeking to update their paperwork. As Babanov explained when this news was first revealed, in 2007, the confusion dated back to the mid-1990s, when he was living in the southern Kazakhstan city of Taraz.

“I was told that I had to change my old passport for a new format passport,” he told reporters. “I did it because I had run into trouble with my old document. But nobody explained to me that this would automatically lead to me becoming a citizen of Kazakhstan and that I would lose my Kyrgyz citizenship. Nobody asked for my consent.”

But for him to now receive the benediction of Kazakhstan’s leader could potentially not look so great, for some. Others, however, see Nazarbayev as the venerable elderly statesman at the helm of a country whose economy vastly outweighs that of Kyrgyzstan. The idea that he and Babanov already have a working relationship may well appeal to those voters.