Stories of untrammeled graft have spurred action – against the journalists investigating and activists calling for change, not the alleged criminals. 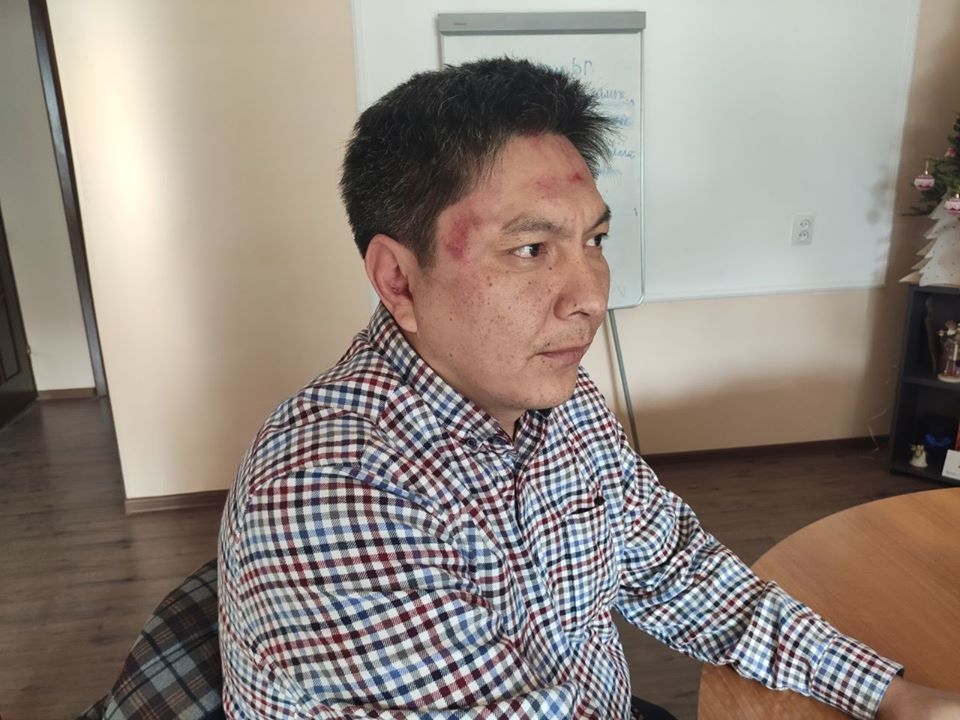 Anti-corruption activists and journalists in Kyrgyzstan are under siege. Barely a week passes these days without an assault, threat, lawsuit or arrest.

As public calls mount for the authorities to finally take action against untrammeled graft, it is those documenting the problem who are feeling the heat.

On January 9, Bolot Temirov, chief editor of the news website Factcheck, became the latest apparent victim of the backlash. Sometime after midday, as he was returning to work from lunch, he was jumped by three stocky men in the yard outside his office in Bishkek.

“When he came into the office, he could barely stand on his own feet. We sat him down in a chair and put cold packs on his bruises,” his colleague, Asel Sooronbayeva, told Eurasianet.

Temirov and his colleague have no doubts what prompted the assault. A few weeks earlier, Factcheck had run an investigation into the mysterious wealth of the wife of a now-notorious former top customs officials called Rayimbek Matraimov.

Scrutiny of Uulkan Turgunova’s closed social media accounts revealed a life of unaccountable opulence. Photos showed Turgunova, who has only ever worked in public service, wearing watches and jewelry by Cartier, Rolex, Bulgari and Chopard – all worth many times more than the average annual salary of a Kyrgyz government employee. When Turgunova holidays, she does so at five-star hotels in Dubai. Her children likewise enjoy impossibly glamorous lifestyles.

“Our neighbors said that a day earlier some people came to them and opened our website on their phone and asked where our office was,” she said.

Violence is only part of the story.

Shortly after Factcheck published its investigation, its website came under a distributed denial-of-service attack, or DDoS attack. Other websites that had published similar investigations got the same treatment.

Looking back at the spate of recent episodes of harassment of activists and journalists, all the strands inexorably lead back to the Matraimov family.

Rayimbek Matraimov, who climbed through the ranks of the customs service for more than a decade before being fired as its deputy chief in November 2017, sits at the head of this tightly knit clan. His older brother Iskender is a member of parliament. Another sibling heads a district in their native south. Yet another brother, Ruslan, runs a chain of sports clubs focused primarily on martial arts.

Little of this seems to account for the expensive cars, homes and holidays that the family can afford, not to speak of their lavish philanthropic activity.

And those who cross the Matraimovs rarely emerge from the encounter unscathed.

Rayimbek Matraimov was fired from his customs post by then-Prime Minister Sapar Isakov. Only a few months later, Isakov was himself fired and subsequently tried on corruption charges and sentenced to 15 years in prison.

In 2019, RFE/RL’s Kyrgyz service, Radio Azattyk – and later the Organized Crime and Corruption Reporting Project and Bishkek-based news website Kloop – drew on informant-provided evidence to run articles alleging that the Matraimovs had, together with Chinese-born ethnic Uyghur businessman Khabibula Abdukadyr, spirited hundreds of millions of illicitly earned dollars out of Kyrgyzstan.

Several hundred people incensed by the revelations turned out for a demonstration in Bishkek in late November. Prominent activists involved in that and a follow-up rally say they were warned not to attend. Human rights activist Dinara Oshurakhunova said she got a threatening phone call ahead of the second anti-corruption demo in December.

“It seems to me that this was done by law enforcement agents. It was not just me that got these threats. Other activists got them too,” she said.

Oshurakhunova said things are getting worse for activists and those probing corruption. It is now routine for them to be tailed, detained and threatened, she said.

For Oshurakhunova, the situation feels like a blend of two prior presidential tenures – that of Kurmanbek Bakiyev, who was overthrown in a bloody public revolt in 2010, and the marginally more forgiving era of Almazbek Atambayev, who left office in 2017.

“Under Bakiyev there were attacks on journalists. In Atambayev’s time there were lawsuits. When we see participants of the [anti-corruption] rally getting threats, we can say that history is repeating itself,” she said.

Two reporters for Radio Azattyk who worked on Matraimov stories have relocated to Prague, where RFE/RL has its European headquarters, out of concern it is they, not the object of their reporting, that will face reprisals. One of them, Ali Toktakunov, is one of several plaintiffs, who include Azattyk, the OCCRP, Kloop and news agency 24.kg, in a series of libel lawsuits filed by Matraimov collectively worth around $1 million.

In some instances, pressure has been indirect. In December, Syrgak Kenzhebayev, the spouse of well-known activist and former lawmaker Shirin Aitmatova, was detained at an airport in neighboring Kazakhstan and swiftly deported to Kyrgyzstan at the request of authorities in Bishkek. The unusually smooth and rapid implementation of this cross-border arrest, which was prompted by a complaint lodged by a former client of Kenzhebayev, was only one of several details to arouse suspicions.

Rights activists noted that it was odd that an allegation of fraud could serve as grounds for immediate extradition. And lawyer Zamir Zhooshev wondered why the Kazakh security services would have been involved in a matter clearly outside their remit.

“The fraudulent activities were supposedly committed inside Kyrgyzstan. This means that Kazakh security services had no grounds to effect the arrest,” Zhooshev wrote on Facebook.

The conclusion drawn by Aitmatova, who has also focused much of her activism on Matraimov and his perceived stranglehold over the Kyrgyz political elite, is that she was the true target. The fact that the complaint against Kenzhebayev was filed by a man with ties to Matraimov’s alleged associate, the Chinese businessman Khabibula Abdukadyr, would appear to lend weight to that supposition.

The chill has even extended to members of parliament. Dastan Bekeshev, the only lawmaker to attend the Bishkek demonstrations, said he too was cautioned to keep away. After defying that warning, he was informed that prosecutors were to begin probing potential inaccuracies in his tax returns, he said.

Ulan Usoin, an activist who played a key role in organizing the two demonstrations, said that he has come under intense monitoring.

“(One time), when I got to my regular coffeeshop, the manager came and asked me: “You know you’re being followed, right?’” he said.

Usoin said his parents, who had supported his work, have been spooked by the intimidation. He feels that he has become more mentally resolute, however, and has pledged to keep going.

“They locked up Shirin’s husband and beat up Bolot, and they are spooking other activists. But if we stay quiet, others will go quiet too. I don’t want to let people down, so I will continue to talk and to write,” he said. “This is the start of the fight. We began, and now we have to take things to the end.”