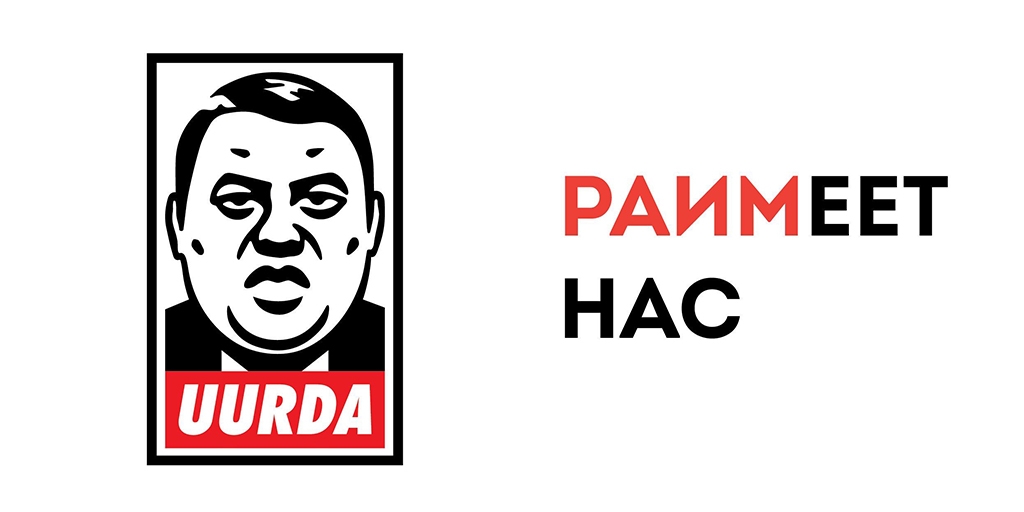 The mockup for the Rayim Million T-shirts, which sport the imperative “thieve.” The reverse is a play on his name, suggesting he “will have his way with us.” (@SAitmatova/Twitter)

The premium-class Lexus automobiles parked outside Buddha Bar distinguish it as a high-end joint.

At 11 p.m., it is rush hour. Patrons are coming and going, so anybody on fishy business needs to play it cool.

Also, this is no regular Bishkek bar. The received wisdom is that it belongs to one Rayimbek Matraimov, a hugely influential, behind-the-scenes powerbroker in the political life of Kyrgyzstan. And that is why Alina was lurking in the shadows, wearing a dark T-shirt, pants and cap, on a recent July night.

“I’m kind of nervous,” she said, noticing the close-circuit cameras. 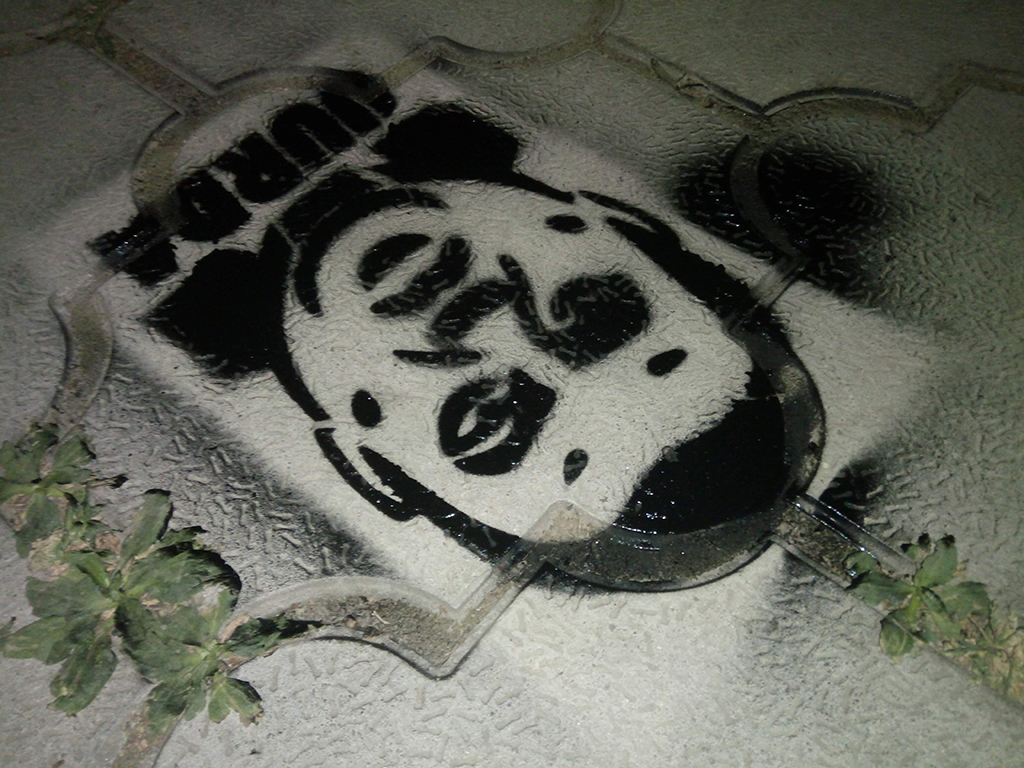 After pacing round the building a couple times and waiting until arriving drivers killed the headlights, Alina went in for the kill. She slipped on a surgical mask and pulled out a spray can and stencil.

Some quick piffs later and the job was done. The result: a comically rendered image of Matraimov’s face and under it, a one-word imperative, “Uurda” (Thieve), right near the busy entrance to the summer terrace.

“This is no more than you deserve,” said Alina as she studied her handiwork.

For people like Alina, part of an underground movement of politically engaged graffiti artists, Matraimov is a perfect example of all that is wrong with the country.

“Normally, I cross the road on green or at pedestrian crossings. But what I am doing is not vandalism, it is civil resistance art,” said Alina, who spoke to Eurasianet on condition that her real name was not published. “I think about Matraimov day and night. And I will only stop thinking about him when they put him in jail.”

Matraimov, a native of the southern Kyrgyzstan village of Agartuu, has spent most of his working life, starting from the late 1990s, in the state customs department. Government service pays notoriously badly, which is why it raises eyebrows – and hackles – that Matraimov and his family have grown seemingly so rich. This unexplained wealth has inspired the nickname “Rayim Million.”

And it is not just about the money. Matraimov is known to be a kingmaker with significant sway over national politicians. (Eurasianet was not able to reach Matraimov for comment. He is known not to give interviews.)

His notoriety reached a wider audience in May, when RFE/RL’s Kyrgyz service, Radio Azattyk, ran a report alleging that businesses close to Matraimov had spirited around $700 million out of the country.

The grumbling had begun earlier though. Following multiple public complaints, President Sooronbai Jeenbekov last December ordered the finance police to run an investigation into the Matraimov family assets. Investigators claim not to have turned up anything deserving suspicion, however.

In his own research, Azattyk reporter Ali Toktakunov offered a possible explanation for this hold-up. Relatives of the head of the financial police, Bakir Tairov, themselves have links to companies owned by Matraimov. Tairov later confirmed as much, but he insisted that this “in no way influenced” his department’s work.

So in July, angered Facebook and Twitter users began parlaying their frustrations into an awareness campaign. The image of Matraimov that appears dotted around Bishkek is the brainchild of designer Ruslan Tokochev.

First, the cartoon was adopted as an avatar by social media users as a protest against the slow progress of investigations into the former customs boss. Later, a group of young activists decided to take the image to the streets, spray-painting it on buildings belonging to Matraimov and on the offices of government bodies that are meant to be investigating him.

One particularly vocal anti-Matraimov activist is Shirin Aitmatova, a 42-year-old former member of parliament, who has decided to wade back into politics after a few years away from the scene. Her contribution has been to distribute Uurda merchandise, on T-shirts, badges and stencils.

“We cannot fight them with the same tools that they have. But we can make fun of them and say we refuse to be robbed. Graffiti with Rayim’s image is political art,” Aitmatova told Eurasianet. “This is not vandalism. Vandalism is when parliament destroys the country and when they sell out our interests.”

None of this is to suggest that Matraimov is not without his public defenders. Parliament speaker Dastan Dzhumabekov in June dismissed criticism and argued that the Matraimov family had “served the people” through their charitable works.

Aitmatova is angered at such talk, which she takes as further evidence that the legislature is not up to the job.

“When the speaker of parliament comes out and says this is such a wonderful family and that they are working for the people, this is just shameful,” she said.

Another line of attack has come from within the establishment. Gulya Almambetova, the energetic and outspoken advisor to the Bishkek mayor, drew fire for her salty remarks on Twitter last month.

“Let us sort the wheat from the chaff. Rayim, why don’t you get the fuck out of our lives? You’re pissing us off, and so is everybody who supports you,” she wrote.

Almambetova said she watched the Azattyk report on Matraimov together with her uncle, who also previously worked in the customs service. She said he told her that the corrupt schemes described in the report were spot on.

“Matraimov’s schemes operate at all customs checkpoints. This all really upset me,” she said.

An image that circulated on Twitter shows a girl wearing a T-shirt bearing a logo like that of the Matraimov-Uurda image, but with a picture of Aitmatova above the word “whore” instead.

Around the same time, emotionally charged videos began appearing online with testimonies from people who said that Matraimov’s charities had helped pay for life-saving medical operations. In other videos, he is hailed as a “hero for our times” for funding the construction of mosques and sports facilities and paying for young people to go to university. 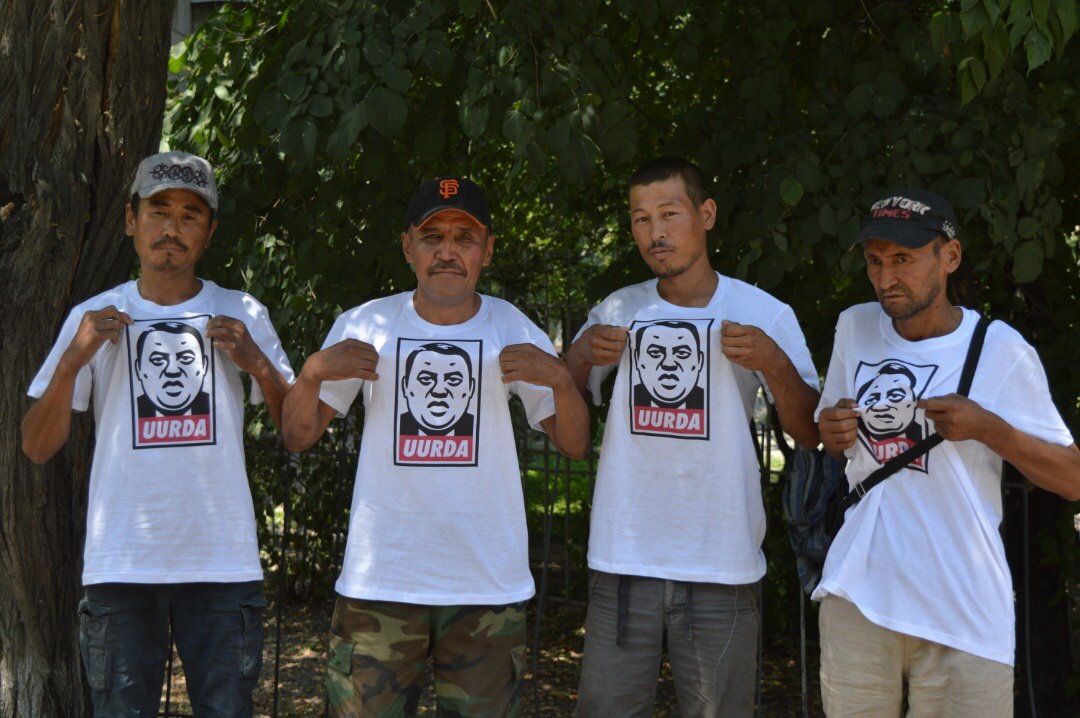 Matraimov is also tangentially – or very directly, depending whom you believe – involved in the public and dramatic political story now roiling Kyrgyzstan.

Atambayev, the former president who was taken into custody last week after violently resisting a special operation to enforce a serially ignored police summons, accuses the former customs boss of being a key sponsor of President Jeenbekov and engineering his own downfall. Matraimov and Jeenbekov, Atambayev has said, are part of one sprawling, clannish regime founded on family ties.

Then again, Atambayev has avoided explaining why, if he regarded Matraimov with such contempt, he retained him in service for so long over his six-year tenure, which ended in November 2017. Matraimov was fired as deputy head of the customs service only on November 23, 2017, one day before Atambayev concluded his time in office.

In a rare public statement in May, Matraimov responded to Atambayev with an ominous message.

“In my time, I served the nation and you, but now I ask you not to drag me into conflicts between you and the new president. But let me just say that if you do not stop smearing me and defaming me, I will not just stand idly by,” he said.