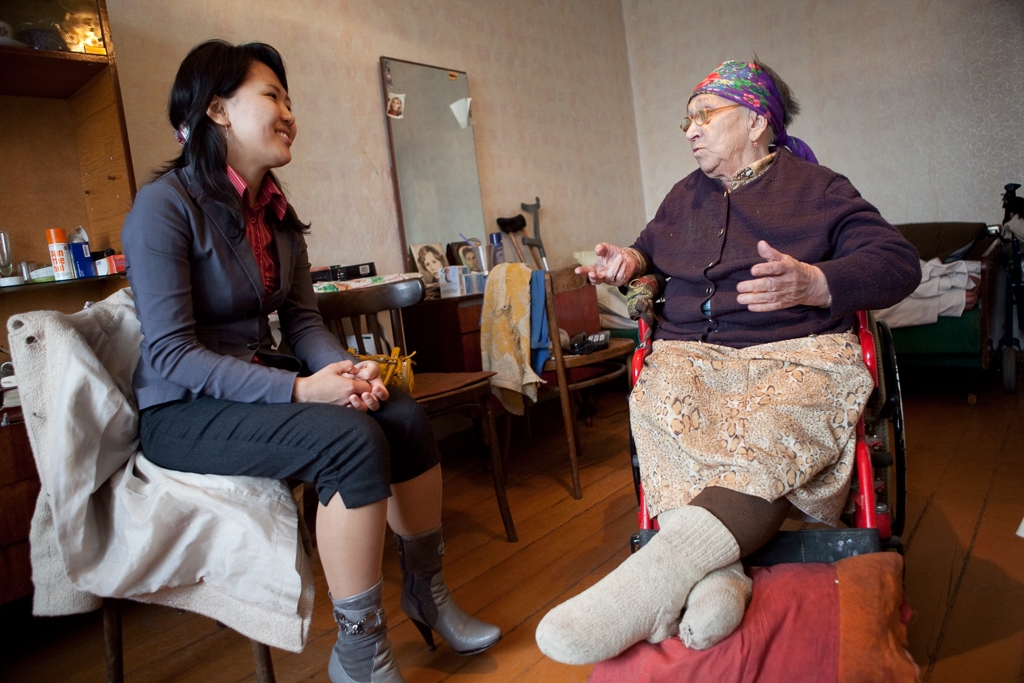 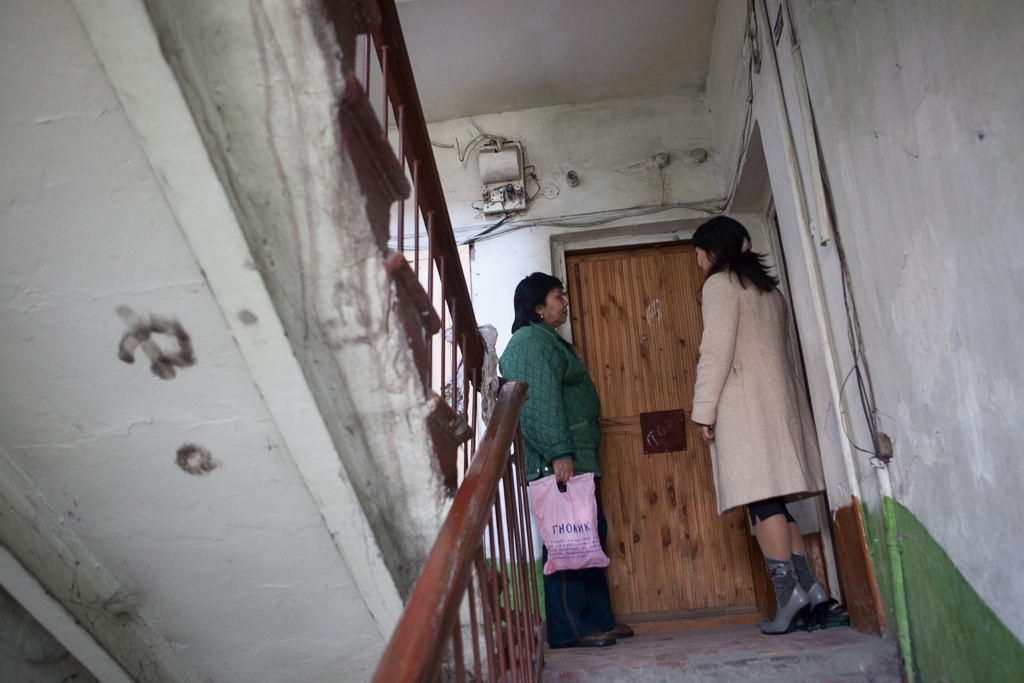 Social workers from Babushka Adoption visit clients in their homes. Some 88 percent of the clients are elderly women. 58 percent are of Slavic decent, though less than 14 percent of Kyrgyzstan's population is Slavic, according to US government figures. 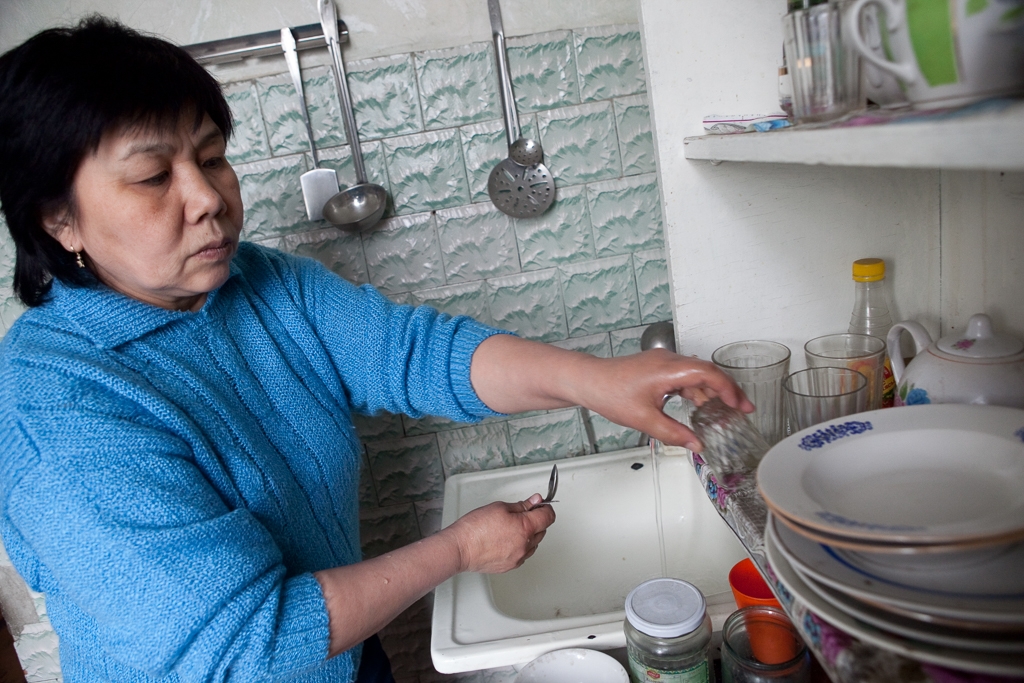 Gulya Yengerbayeva, one of three social workers with Babushka Adoption in Bishkek, cleans for Galina Ivanovna. Once a week she arrives to help with household chores and bathing. 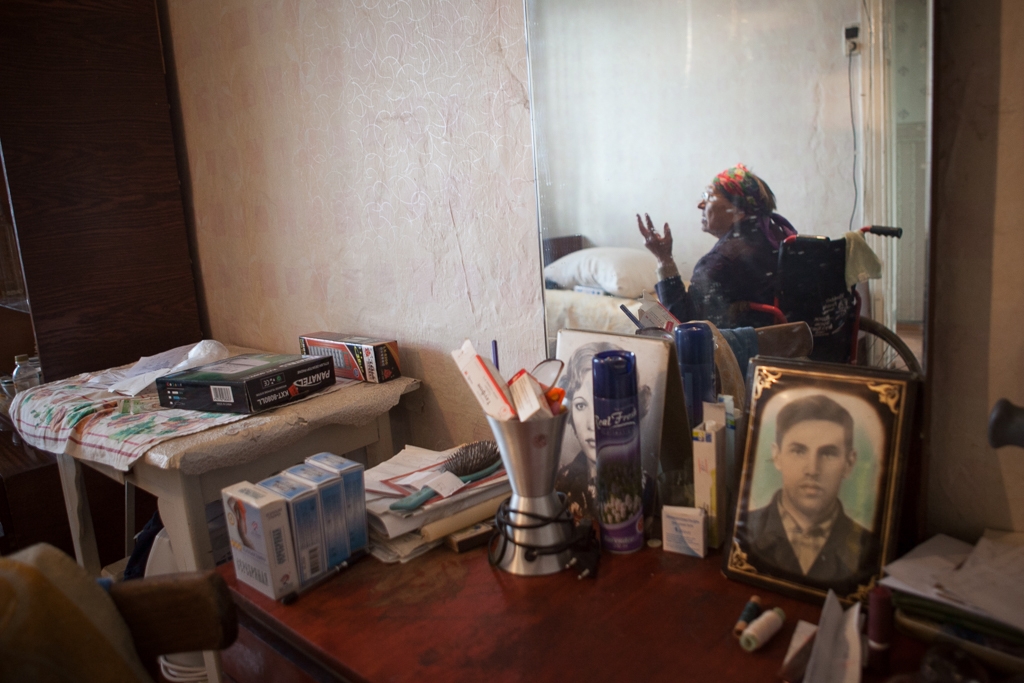 Galina Ivanovna, 79, in her home in Bishkek. She has not left the apartment in five years. Her husband, in the framed photograph, died at age 29 and left her with two children. They live in Russia. 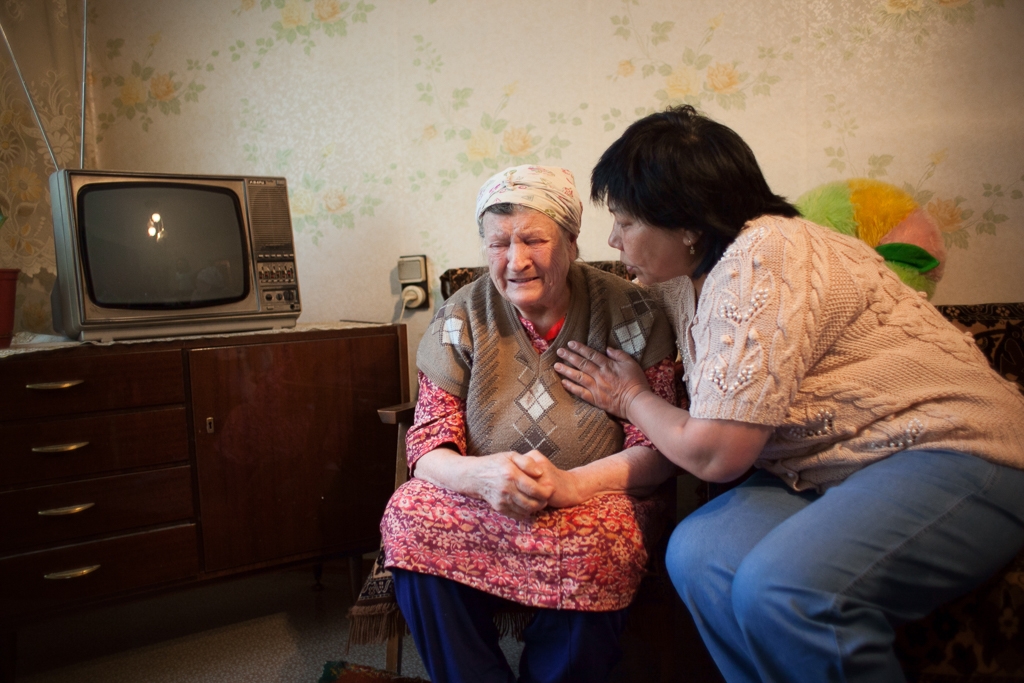 Alexandra Lomanova, 84, cries describing her loneliness to Gulya, a social worker from Babushka Adoption. Her only son died last year and her granddaughter living in Kaliningrad, 4000 kilometers away, does not visit. 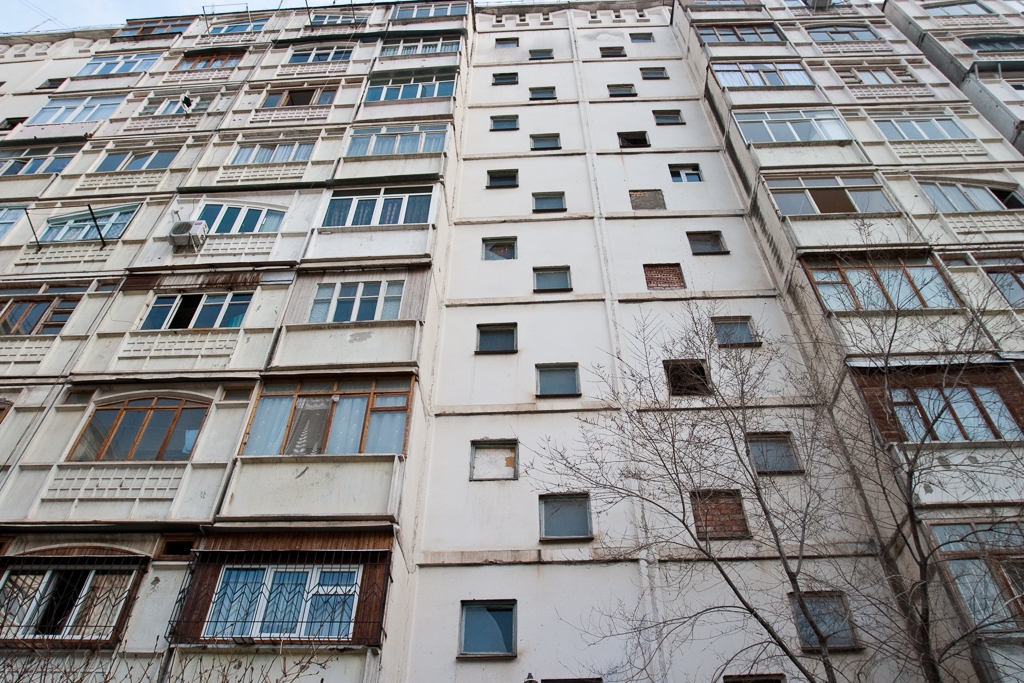 Tamara Shevchenko, 91, cannot walk and thus cannot make it out of her apartment building. She says she hasn't left in years. 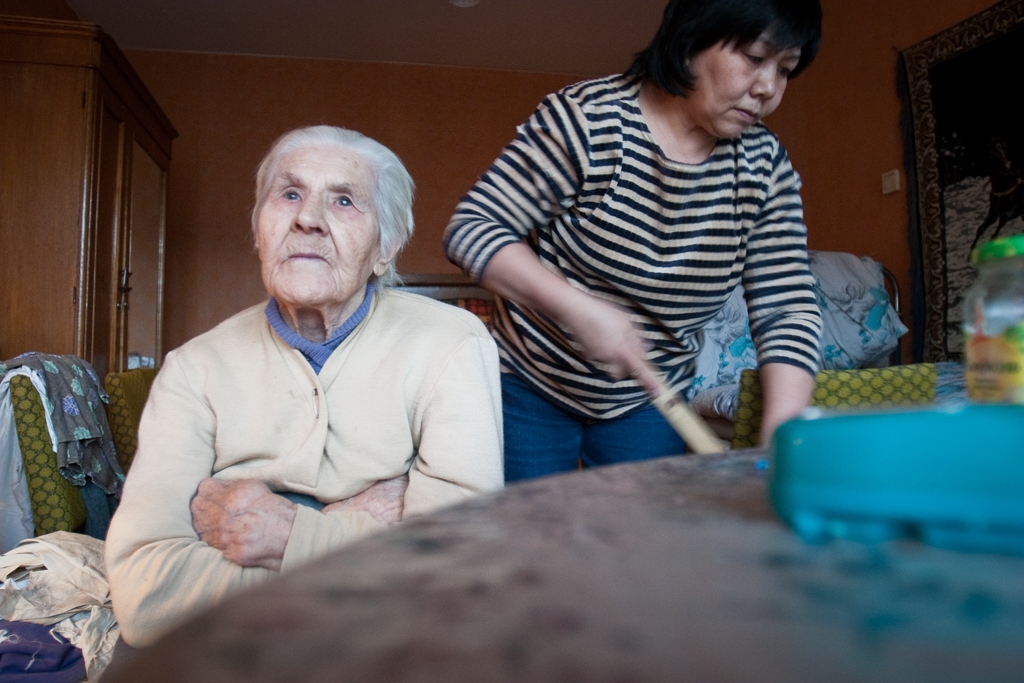 Tamara Shevchenko, 91, cannot walk and is nearly blind. Gulya Yengerbayeva from Babushka Adoption comes once a week to clean her apartment and help her bathe.
prev
next

Dr. Tamara Shevchenko, 91, was born the year of the Bolshevik Revolution. Her life was dedicated to science and advancing the Soviet ideal. She never married; never had children. Now she is alone.

Unable to leave her apartment or cook, she uses an 18-inch footstool to hobble around her two-room apartment. "I never got married. We didn't have free time because we would work every day. Every young man at that time died because of [World War II], so there wasn't really anyone to marry. There were guys who were drinking, alcoholics. I looked good when I was young. But I didn't want to marry such a guy," she explained.

Across Bishkek, Galina Ivanovna, 79, hasn't left her one-room apartment for five years. She is unable to walk or read, but her mind is still sharp. "One of my friends asked why I haven't committed suicide. I said my time is up to God," she laughs.

Both Shevchenko and Ivanovna complain about one persistent problem -- the rising cost of food.

"I'd like to buy some cream cheese, but it is too expensive," says Ivanovna. "Everything is expensive now. I need an eye operation for my cataracts. It costs 6,000 [soms; about $140] per eye, but I can't afford it, so I cannot read anything. I would like to read the Bible."

An undetermined number of elderly people in Kyrgyzstan, mostly older women -- or babushkas (grandmothers in Russian) -- live alone on meager pensions of $40 or less per month. With the inflation rate at times topping 30 percent in this isolated Central Asian country, state assistance has not been able to keep pace with rising costs. Malnutrition is rife. Independent estimates say 80 percent of senior citizens in Kyrgyzstan live below the poverty line.

But thanks to one organization, Babushka Adoption, life is becoming a little easier for some elderly women, including Shevchenko and Ivanovna.

In its 10th year, Babushka Adoption "lets old people know they are not forgotten, or completely neglected," says volunteer Jonathan Hornbrook, who chairs the group's supervisory board.

"We encourage and translate correspondence with sponsors," Hornbrook continued. "We supply social workers to help the weakest in their every day lives at home. We also help elderly people organize themselves to let their plight be better understood by society and the government."

Through private donations and international donor support, the organization gives 10 euros a month to roughly a thousand elderly people in the Bishkek and Batken regions. The money, along with donations of food and coal, is a significant supplement to what they receive from the state.

Kyrgyzstan is simply unable to afford to look after the elderly, says Hornbrook. "The government has an insufficient tax base to provide adequate pensions for all old people. This is likely to remain the case in the foreseeable future."

The elder care issue is one area where non-governmental organizations (NGOs) can play a vital support role, he added. "The registered NGO sector is a trustworthy option to create problem awareness in economically developed countries and to channel foreign support," Hornbrook maintained.

Up to 88 percent of beneficiaries are women, and 58 percent of recipients are of Slavic decent. Given the significant out-migration of young ethnic Russians and Ukrainians following the 1991 Soviet collapse, elderly Slavs are far less likely to have family nearby to help them.

At 84, Alexandra Lomanova has outlived her son. Her grandchildren and great-grandchildren live in Kaliningrad, Russia, roughly 4,000 kilometers to the northwest. She hasn't seen them for years.

"I don't go anywhere. I am blind, absolutely blind. Also, I am paralyzed, my legs don't move." A postal worker brings Lomanova her pension of 1,600 (about $37) soms once a month. "But, it is not enough for me. I can't do anything on my own; I can't wash myself, take a shower, do laundry. Babushka Adoption does it all for me."

The government is trying, Lomanova acknowledges. Because she worked in a weapons factory during World War II, she recently received a bonus on Victory Day, the holiday marking the Soviet Union's military triumph over Nazi Germany. She is now hoping that her wartime service will secure her a pension hike.

Still, Babushka Adoption cannot help all of Kyrgyzstan's forgotten elderly. The global economic downturn over the past year means that there are fewer donors than before. "Many sponsors stepped out this year due to the crisis," said the organization's advocacy specialist, Saltanat Saparbekova.

Some legislators believe the state can do more to care for Kyrgyzstan's elderly population, even with the limited means available. Strategic plans "never include aspects for taking care of the elderly. Obviously finance is not provided for that reason. I think any development plan of any government should include care for the elderly," Gulnara Derbisheva, an MP from the governing Ak-Zhol Party, told EurasiaNet.

Though Derbisheva helped draft a bill to increase pensions, she emphasizes that money isn't enough. "Because of such factors as inflation and the rise of food prices, this doesn't make much difference." While the prime minister recently announced a plan to increase pensions by up to 50 percent this summer, the Kyrgyz som has steadily lost value against hard currencies, dropping by 25 percent against the dollar since last September. The IMF predicts Kyrgyzstan faces at least 12 percent inflation in 2009.

"When we say that first of all they need social and medical support, we are mistaken," Derbisheva said. "They need more psychological and moral support, they need to take part in the decision making process. . . . They need to know that their voice will be heard."

David Trilling is the Central Asia Coordinator for EurasiaNet.