Kyrgyzstan: After a night of violence, neither side is blinking

The president and the ex-president are both making menacing noises as the crisis drags into its second day. 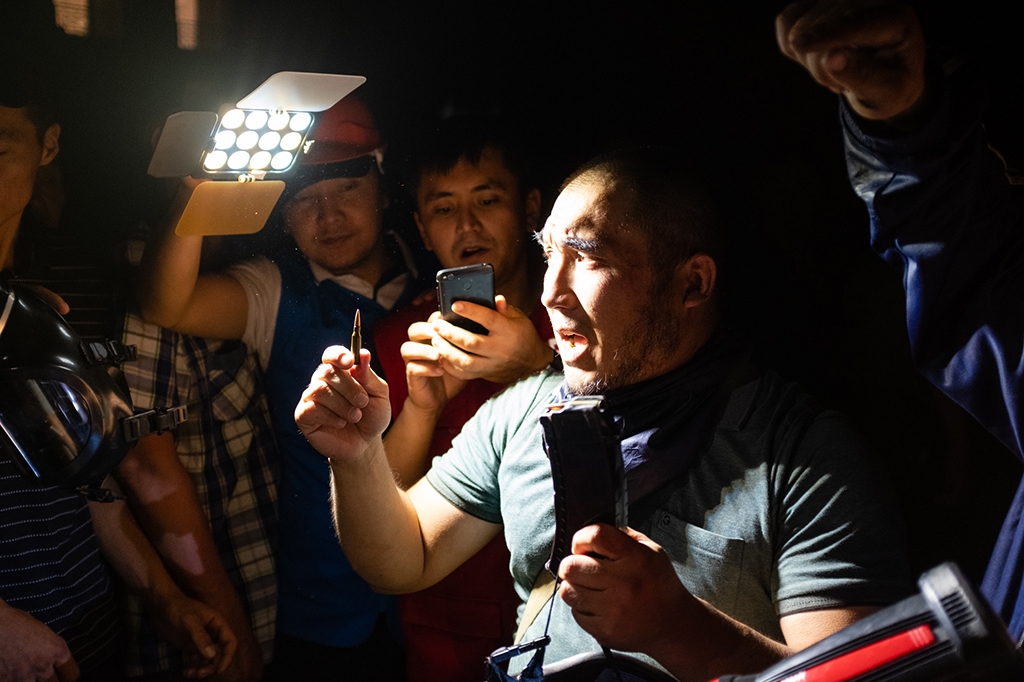 A man at Atambayev's Koi-Tash residence holding up a bullet that he said was used by government troops. (Photo: Danil Usmanov)

After a night of unrest in Kyrgyzstan, neither side in the standoff between the government and the disaffected former president appears prepared to stand down and defuse tensions.

Almazbek Atambayev, who managed through sheer force to prevent being detained by special forces at his residence in the village of Koi-Tash, has summoned a rally in the capital, Bishkek, to take place August 8. He instructed his supporters to hold an indefinite vigil.

“We will hold a meeting so that they do not take us for sheep,” he said.

President Sooronbai Jeenbekov, whose authority has been devastatingly undermined by this episode, waited more than 12 hours after the special forces operation to capture Atambayev failed so catastrophically to make his statement.

The former president, Jeenbekov said, had “crudely violated the Constitution and the laws of the nation by putting up a robust and armed resistance to a legally conducted operation.”

Jeenbekov said “urgent measures” would be taken to uphold peace and order. It was not clear what he meant by that.

Both men appear to have disastrously misjudged their hand.

Atambayev, whose single permitted presidential term ended in late 2017, looks to have felt immune following his meeting with Russian President Vladimir Putin at the Kremlin in July. By urging the Kyrgyz government to refrain from pursuing criminal investigations against Atambayev, who proved a fiercely loyal pro-Moscow figure over his six years in charge, Putin seemed to have put the brewing political crisis on hold for the time being.

Jeenbekov did not take heed of that advice.

His government has been serially frustrated by Atambayev’s staunch refusal to heed investigators’ summons to submit to questions about how a prominent criminal boss was released from prison early in 2013.

The authorities insist they only wish to speak to Atambayev as a witness, although few are in any doubt that the likely ultimate aim is to put the former head of state behind bars. Atambayev has bristled with barely concealed rage that he has not been given a major role in running the country’s affairs from behind the scenes. Jeenbekov has reacted poorly to his predecessor’s temper tantrums and thrown several of his key allies behind bars on a range of corruption and abuse of power charges.

When special forces descended on the Koi-Tash compound where Atambayev has been holed up since June, they must not have expected such firm resistance. After hours of clashes, in which both sides deployed gunfire of one kind or another, multiple special forces troops were cornered. One gravely injured soldier was rushed to the hospital and later died from gunshot wounds. The death of the soldier, who has been named as Usenbek Niyazbekov, leaves four children fatherless. A senior police officer fell into coma overnight as a result of head injury incurred when he was struck by a flying rock.

Atambayev said he personally took part in the standoff and that he fired five or six rounds with his weapon as government troops stormed his home.

“I tried not to hit any of the spetsnaz, but somebody kept pushing them forward. I immediately warned that I would resist,” he said.

The State Committee for National Security, or GKNB, accused Atambayev of using women and children as human shields. They denied excess force had been used during the storming of Koi-Tash.

“During the special operation, special forces troops used rubber bullets and special equipment,” they said in a statement.

GKNB chief Orozbek Opumbayev later said he regretted that he had not ordered his men to shoot to kill.

"Nobody expected that Atambayev would start shooting at unarmed people," he said, referring to the special forces troops.

Opumbayev claimed that Atambayev deployed a Dragunov sniper rifle in the confrontation.

"He fired at my troops. Six of them received gunshot wounds," he said.

While several of the captured and bloodied special forces men were allowed to leave Koi-Tash – although only after being led through a gauntlet of aggressive Atambayev loyalists – six were held back, apparently as currency for negotiations.

Atambayev has pledged to release the men, although he had not done so as of lunchtime on August 8.

On the second day of this unfolding crisis, the mood was calm in Bishkek, which is less than one hour’s drive from Koi-Tash, although some stores were reportedly taking precautions by bolstering security. The capital has seen violent waves of marauding during earlier incidents of major political unrest. The most vivid case was in the wake of the April 2010 anti-government uprising, when dozens of stores were looted or destroyed in a days-long frenzy.

While the president and his foe have looked variously hapless and frantic, respectively, the rest of the political class is barely to be seen – much to the chagrin of a frustrated and anxiety-ridden general public.

Few members of parliament had pledged overnight and in the first half of August 8 to summon an emergency session to discuss a possible resolution to the crisis.

When they did finally assemble, after 2 p.m., only just half of the chamber's 120 members were in attendance.

Likewise, other than to make some broad statements, most of the national government has preserved a grave-like silence.

Jeenbekov was reportedly on holiday when the Koi-Tash operation got underway. It was only when it all began to go wrong that he rushed back to Bishkek. Prime Minister Muhammetkaly Abulgaziyev was a ghost until he came to make his statement before parliament. Only his deputy, Altynai Omurbekova, visited people injured during clashes at Koi-Tash.

Official policy is to pretend all is as normal.

A large-scale international event – a heads of government meeting of Eurasian Economic Union members, scheduled to take place on the shores of Issyk-Kul Lake on August 8-9 – is proceeding as planned, according to Abulgaziyev’s office.

This article has been updated to reflect developments.