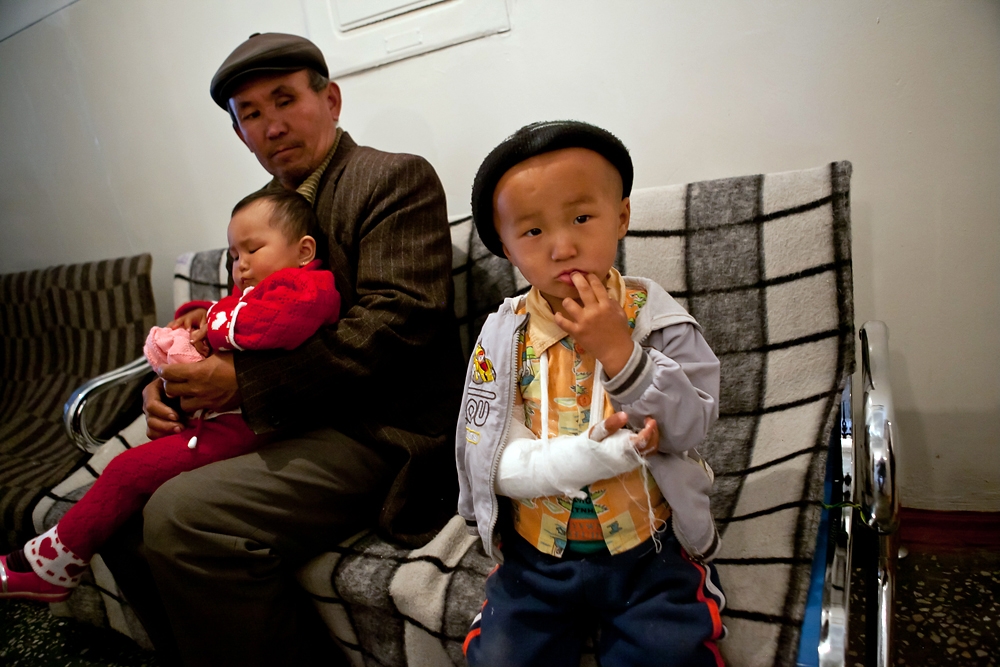 While most Kyrgyz visit the hospital for healthcare, many seek out alternative medicine cures. (Photo: David Trilling)

Outside Aslan Arlozorov’s cottage in suburban Bishkek three people discuss their ailments as they wait in line. One has asthma; a second has a stomach ulcer; a third, cancer of the liver. The last patient is turning to Arlozorov, a practitioner of herbal medicine, or a “travnik,” out of desperation. But the other two have not seen a regular doctor in years and have been consulting Arlozorov routinely for a decade.

“My father was a travnik. When I was in the first grade I knew 35 plants by their names and curative properties,” said Arlozorov. “Now I know 441. Many doctors refer their patients to me.”

As Kyrgyzstan’s healthcare system experienced a steep decline after the Soviet Union’s demise in 1991, the use of alternative medicine – any treatment viewed as unorthodox by the medical establishment – gained popularity. According to research published earlier this year in the peer-reviewed journal Complementary and Alternative Medicine, a quarter of Kyrgyz citizens now rely on alternative approaches to treat any of 10 common symptoms ranging from coughs to lumps under the skin, the highest proportion in the eight post-Soviet countries surveyed. Doctors working in Kyrgyzstan’s predominantly state-run health sector attest to this tendency, and worry that it handicaps their ability to treat serious diseases.

“After the collapse of the Soviet Union, these so-called healers sprang up like mushrooms after a rainstorm,” said Suyumjan Mukeeva, director of the Association of Family Doctors, a professional lobby in Bishkek. “A person in the village goes to one of them with first-stage cancer and they are told they have an ‘evil eye.’ By the time it becomes fourth-stage cancer, it is too late for the [health] system to cure them,” said Mukeeva. At the same time, she acknowledged that patients in some of Kyrgyzstan’s regions lack “physical access” to qualified doctors.

A shortage of specialists and doubts about the quality of prescription drugs have encouraged Kyrgyz citizens to explore alternative cures. Observers also attribute the popularity of alternative medicine to the persistence of shamanist beliefs in this nominally Muslim country. Alongside listings for used furniture and plumbers, the pages of Vechernii Bishkek, a popular Russian-language newspaper, are full of classified advertisements for witch doctors who claim to have the power to “remove” a patient’s “evil eye” – an ancient concept that explains bad luck -- as well as cure common ailments such as chronic back pain.

Arlozorov, whose bookshelves bend under the weight of texts on botany, homeopathy and Chinese medicine, and who treks into Kyrgyzstan’s flora-rich countryside every week to gather ingredients for his remedies, draws a distinction between his work and the shamanistic practices of folk doctors in the country’s regions.

“That man, who came to me with cancer of the liver – perhaps I can’t cure him. But I can help him as much as his regular doctor,” Arlozorov told EurasiaNet.org. “The liver has 570 distinct functions. My remedies will enable some of them to work more effectively.” Arlozorov claims that his patients fear Western pharmaceutical companies use Kyrgyzstan as a laboratory, “testing” their medicines. Such fears help his business, he admits, though he declined to discuss his income.

Attempts by the government to regulate alternative medicine have been unsuccessful, says Mukeeva, the doctor. A spokesperson for the Health Ministry told EurasiaNet.org that the government “could not endorse” non-orthodox medical practices, “since they are too diverse, and there are some forms of so-called treatment that cause more harm than good.”

Perhaps Kyrgyzstan’s most famous practitioner of alternative medicine is Jenishbek Nazaraliev, a trained psychotherapist, whose private clinic in downtown Bishkek, the Doctor Nazaraliev Medical Center, treats drug addicts from the United States and Europe as well as former Soviet states. By combining “classical medical approaches to psychological and physiological healing” with techniques sourced from paganism, Sufism and other world religions, Nazaraliev has built an international reputation as an expert in curing addiction.

Nazaraliev believes his early experiments with alternative psychotherapy for alcoholics, televised during the late 1980s, unwittingly “gave impetus” to a shamanist revival among the historically nomadic Kyrgyz, and branded him a witch doctor among those unfamiliar with his methods. “Even the current president [Almazbek Atambayev] thinks I’m a shaman,” complained Nazaraliev, who launched a short-lived political career on the back of his clinic’s success. “When we were [presidential] candidates in the 2009 elections, he accused me of turning him into a zombie!”

Nazaraliev believes that alternative and orthodox medicinal treatments can be jointly used in areas other than drug rehabilitation. But Kyrgyzstan’s “intellectual deficit” – characterized by the loss of “95 percent of our medical specialists” to emigration and old age since independence – prevents any sort of “synthesized approach” to patient care, he added. A lack of coordination also plagues Kyrgyzstan’s practitioners of alternative medicine.

“Now one person works with salt, another with plants, another with mud, and some cast spells. Everything is piecemeal. As a country we lack unified systems for treating patients,” he told EurasiaNet.org.