A prime minister has been nominated under highly unusual conditions. 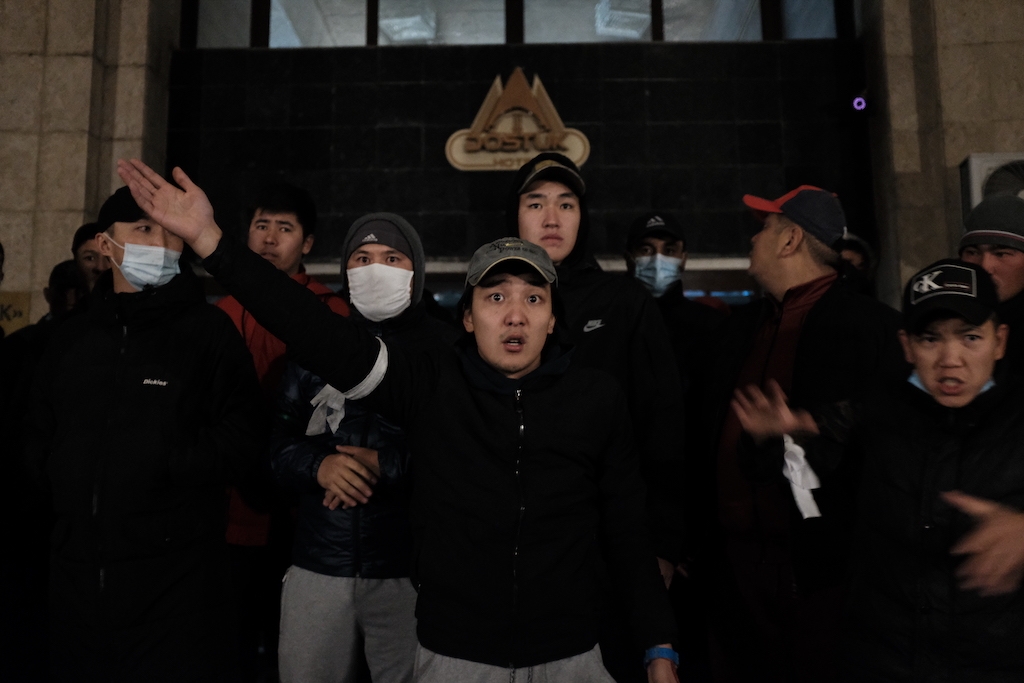 An attempt by a rump parliament in Kyrgyzstan to appoint a new prime minister has not only failed to restore any sense of normalcy to the country – it is sowing yet more confusion.

With the weekend’s elections declared null and void on October 6 following a lightning-quick street uprising that has half-toppled the government, it has fallen to what was to be the outgoing legislature to decide on a new executive.

The process has been an exercise in organized mayhem. Lawmakers splintered into two factions and gathered at a hotel and cinema, respectively, to consider who should get the prime ministerial nod.

The larger faction, holed up the Dostuk Hotel, made the case for Sadyr Japarov, who was languishing in a cell serving a sentence on kidnapping charges less than 24 hours earlier. While deliberations were said to be ongoing, an extremely aggressive and testy horde of Japarov supporters glowered outside the hotel, threatening at many stages to barge their way inside. Journalists were unable to monitor the process for themselves as they were denied access.

All deputies present at the Dostuk voted to nominate Japarov as head the government. It is not public knowledge exactly how many lawmakers were present. Appointing the head of an executive requires a quorum of at least half the sitting 120 MPs, and the hotel gathering reportedly fell some way short of that. This shortfall was apparently remedied through proxy voting.

Soon after this vote was rushed through, Japarov left the hotel through a back entrance, disappointing supporters who had been expecting the politician to speak to them. Unconvinced by accounts that their champion had indeed departed the scene, the crowd attempted again to storm the hotel and were only persuaded to desist upon learning that Japarov was being interviewed in a television studio at a different location.

The mob later reassembled at the hotel all the same and attempted once again to storm it, with no evident purpose other than sowing destruction. Gangs of unidentified men, possibly including many of the same ones outside the Dostuk, roamed Bishkek all night and were prevented from attacking restaurants, stores and public buildings only by hundreds of volunteer brigades known as the druzhinniki.

Does this elaborate performance, then, mean Japarov is prime minister-nominee?

Not according to the Kyrgyz ambassador to the United Kingdom, Edil Baisalov, who took to Twitter to make a strongly worded case for correct procedure.

“I call on the international media to refrain from assigning any official status to various reports about Kyrgyz government appointments until they are adopted by the parliament with required decorum and due process and confirmed by the head of state as required by law,” he wrote.

The newly minted speaker of parliament, Myktybek Abdyldayev, doubled the dose by saying that while a majority coalition had nominated Japarov, the putative prime minister-in-waiting has many hoops to jump through – including getting approval from the legislature’s constitutional committee – before he and whatever executive he forms are allowed to take office.

There is also Coordinating Council to reckon with. The responsibilities of this ad hoc transition-arranging body are not well-defined, but they are presumed to include managing the formation of an interim government among them. Unlike the hotel-bound splinter of parliament that rushed through the prime ministerial nomination, the Coordinating Council includes a wide spectrum of political formations, some of which have explicitly resisted Japarov’s ascendancy.

As Baisalov noted, Japarov would also need the approval of the president. But Sooronbai Jeenbekov performed a disappearing act at the peak of the post-election protests and was, as of early October 7, still in hiding at an undisclosed location. He only emerged from cover momentarily to grant an interview to BBC Kyrgyz service, telling them that he was “ready to give responsibility to strong leaders, no matter which group they belong to.”

“I am even ready to help them,” he said.

Even as he made what looked like a statement of imminent surrender, however, Jeenbekov condemned what he described as protests whipped up for the sole purpose of removing him from power.

Jeenbekov may yet get help from an unlikely source.

While shenanigans of dubious constitutional merit played out in Bishkek, the southern city of Osh was seeing its own informal tussle for power.

Attendees of a rally on a square in front of the mayor and governor’s office heard a day’s worth of speeches on October 6 calling for the return of self-exiled former city chief Melisbek Myrzakmatov, who ran Osh from April 2010 to December 2013.

This prospect will terrify many in the city. Myrzakmatov tacitly encouraged a days-long outburst of ethnic violence in Osh in June 2010 that culminated with the death of around 400 members of the minority ethnic Uzbek community. In an interview after that unrest had subsided, he spoke approvingly about what he described as the quelling of a supposed separatist movement, stating that “the Uzbeks attacked the sovereignty of the Kyrgyz Republic, but we rebuffed them.”

His possible return would notionally be impeded only by the fact that he was sentenced to a seven-year prison sentence in absentia on charges of abuse of office after being fired as mayor in 2013.

But it became evident in the course of the day that Myrzakmatov was indeed intent on flying to Osh, and he duly arrived late in the evening. His entrance into the square was greeted with jubilant scenes. Quite how and when Myrzakmatov will be able to assume any kind of office, though, is subject to likely tortuous and tense negotiations with other informal groups in his city.

In the speech he gave to his supporters, Myrzakmatov said that he supported Jeenbekov and that those seeking his overthrow were intent only on “destroying the country.”

This is an awkward but important endorsement for the president, who will, if he is intent on remaining in power, have to consider whether he is prepared to draw on the moral support of a person who has been evading justice for years.

The drama that has unfolded across the country is provoking profound dismay among those who had imagined that the unanticipated uprising that began on October 5 might presage a season of political renewal. Many of those now sliding into power are not only old faces, but also ones with dubious pasts, not to speak of criminal records.

Temirlan Sultanbekov, a candidate with the Social Democratic Party of Kyrgyzstan who turned 22 in September, said the time had come for young people to take charge and to clear out older generations of politicians.

“I am ready right now to go to the polls,” he said in a video message.