Kyrgyzstan and Tajikistan’s Roads of Separation 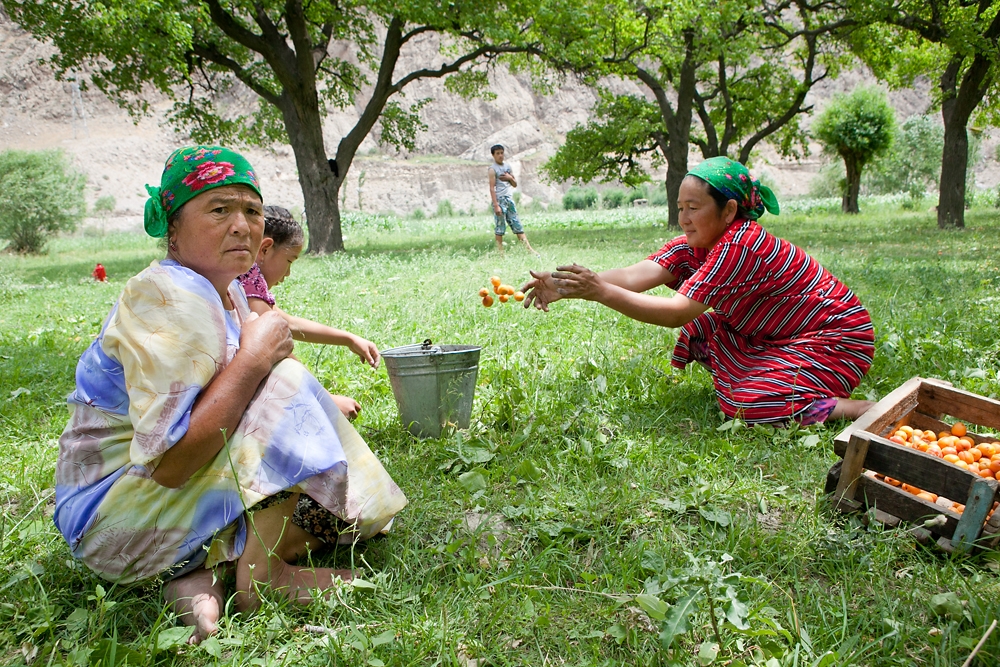 Kyrgyz women pick apricots on contested land between Kyrgyzstan and Tajikistan near the Tajik exclave of Vorukh and the Kyrgyz village of Ak-Sai. (Photo: David Trilling)

“Don’t spit in the well you drink from!” This expression, which has equivalents in both Kyrgyz and Tajik, is often heard in the Isfara Valley to express the interdependence of life along the twisting, largely unmarked border between Kyrgyzstan and Tajikistan.

In this intensely farmed and densely populated valley, everyone depends on the Isfara River, and the canal system it sustains, for their livelihoods. At the upper end of the valley, as the river narrows to a steep gorge at the villages of Ak-Sai and Vorukh, residents also depend upon a single road to reach their respective administrative centers, as well as their mountain pastures. When roads and borders are closed, as they have been periodically over the last month following suspected arson and later an exchange of fire between border troops, prices for basic goods rapidly rise, and the delicate interdependence of borderland life is ruptured. In such moments, as one Vorukh elder put it to me, “we really become an enclave.”

In the days since Kyrgyz and Tajik border guards clashed near the village of Kök-Tash on January 11, following the resumption of road construction on land that Kyrgyzstan insists is in Kyrgyzstan and Tajikistan contends is “disputed,” relations between the states have cooled, and locals have grown nervous. Over recent years, fragile social peace has largely been sustained by unhindered cross-border movement. But now that tenuous sense of stability is being undermined – in part through donor-funded initiatives to increase border “security” with the construction of new bypass roads.

Amid strained diplomatic exchanges, it is easy to lose sight of what rising tension means for the people living in the Isfara Valley – or why a seemingly unremarkable stretch of road might appear so contentious to some (and so desired by others). The new road promises connectivity and security for people living in and around the Kyrgyz village of Ak-Sai who currently have to cross Tajik territory to reach any other part of their country. For those across the unmarked border in the Tajik villages of Vorukh and Khodjai-A’lo, the bypass is feared because it would effectively undermine the delicate interdependence that currently exists. Until now, local disputes tended to be contained because everyone knew that if “they” blocked the road, “we” too would become entrapped.

New infrastructure often appears as a convenient “fix” to perceived problems relating to codependence. Kyrgyzstani authorities, with encouragement from Western donors, speak of “transport independence” and a desire for Kyrgyzstani citizens not to have to traverse the territory of a neighboring state to reach markets and administrative centers.

But new roads can separate as well as connect. And in this particular corner of the world, untangling long-standing arrangements is fraught with difficulty. The intersections over many generations of predominantly sedentary and pastoral livelihoods are inscribed here in family biographies, traditional herding arrangements, and the names of villages, many of which are habitually referred to with both Kyrgyz and Tajik versions: Khodjai-A’lo/Matchai, Kapchygai/Tangi. The villages of Kök-Tash and Somonien are so spatially intertwined that to an outsider they appear a geographically single space – until locals point out the “Tajik” and “Kyrgyz” streets and the fact that the two schools, 300 meters apart, follow different curricula, celebrate different independence days, and operate on different time zones.

This complicated political geography is not, as is often claimed, the deliberate concoction of Joseph Stalin and his malevolent mapmakers. It is the outcome of the economic imperatives of post-war industrialized agriculture. Throughout the Isfara Valley – as in much of the wider Fergana Valley – Soviet authorities built infrastructure ignoring republican boundaries. Whole villages were forcibly resettled downstream, drastically increasing the population dependent on the river; and exchanges of land between republics for “long-term use” were often ratified in one union republic but not the other. It is these land exchanges that produced today’s “chessboard border,” prompting disagreement between Kyrgyzstan and Tajikistan over which maps and treaties should form the basis of discussions on delimitation.

Under the circumstances, the pressures facing ordinary families are considerable: dilapidated trans-boundary irrigation canals that are everyone’s and no-one’s mean that many families often receive irrigation water irregularly; land shortages mean that land prices in Chorkuh can exceed those in Dushanbe, the capital; customs tariffs elsewhere in the Fergana Valley mean that the local apricot crop must be sold too cheaply to sustain viable livelihoods. Rather than struggling under such adversity, most families long ago pinned their hopes on migrant work in Russia.

When thinking about ways to address border sensitivities, we should be asking not only about the sources of the current conflict, but how local populations have largely prevented periodic land and irrigation disputes over the past few decades from escalating into open clashes. Part of the reason is that for most of the independence era, the “state” – in the form of border guards, customs officers and security services – was experienced here as distant and largely unconcerned with restricting movement. There were few border controls, and border guards were largely uninterested in the movement of village residents. I once interviewed a school director in an Isfara Valley village who told me with pride how, the previous January, Kyrgyz and Tajiks had successfully mobilized together to prevent the erection of a new customs post that would have “prevented people from living.”

Villagers here traded at the same border markets, using both Tajik somoni and Kyrgyz som. Until 2008, when a World Bank-funded road was built to bypass Tajikistan at Chorkuh, buses running the Batken-Chorkuh-Ak-Sai route used to crisscross the border multiple times on each of their journeys, effectively knitting Kyrgyz- and Tajik-majority villages into a shared social and economic space. Trade was understood to be the cornerstone of interethnic and cross-border peace.

In recent weeks and months, that delicate balance has been disrupted. A border regime that effectively functioned through lack of excessive regulation is becoming increasingly securitized. Borders are being closed to “prevent conflict” (with little concern, it seems, for the detrimental effect of such closures on interethnic relations). And border markets are feeling the pinch.

Yet far from being consulted as sources of knowledge and historical memory about the complex exchanges of land that have come to define this region, local people complain bitterly about being ignored by distant officials. At a news conference on January 21, the head of Tajikistan’s Sughd Province, Abdurakhmon Kodiri, insisted that there was “no need” for him to travel to Vorukh to talk to people there. “The people are calm,” Radio Ozodi quoted him as saying, “why go there and disturb them? Problems are being solved. The people are strong of spirit.” Instead, he suggested inviting his Kyrgyz and Uzbek counterparts to celebrate Navruz, the spring festival, with him in March.

The question now is whether, beyond statements of neighborly respect, there is the political will in Dushanbe and Bishkek to address questions of co-existence here, or whether compromise will be hijacked by domestic political concerns. Navruz may indeed provide an opportunity for host-guest demonstrations of respect among Central Asian leaders, as Kodiri suggests. But the holiday is still two months away, and in the Isfara Valley, patience may be running out.

Madeleine Reeves is a lecturer in social anthropology at the University of Manchester and has carried out fieldwork in the Isfara Valley since 2004.