Kyrgyzstan: Another week, another anti-China rally

Demonstrators are demanding more efforts to what they say is an unsustainable inflow of Chinese laborers. 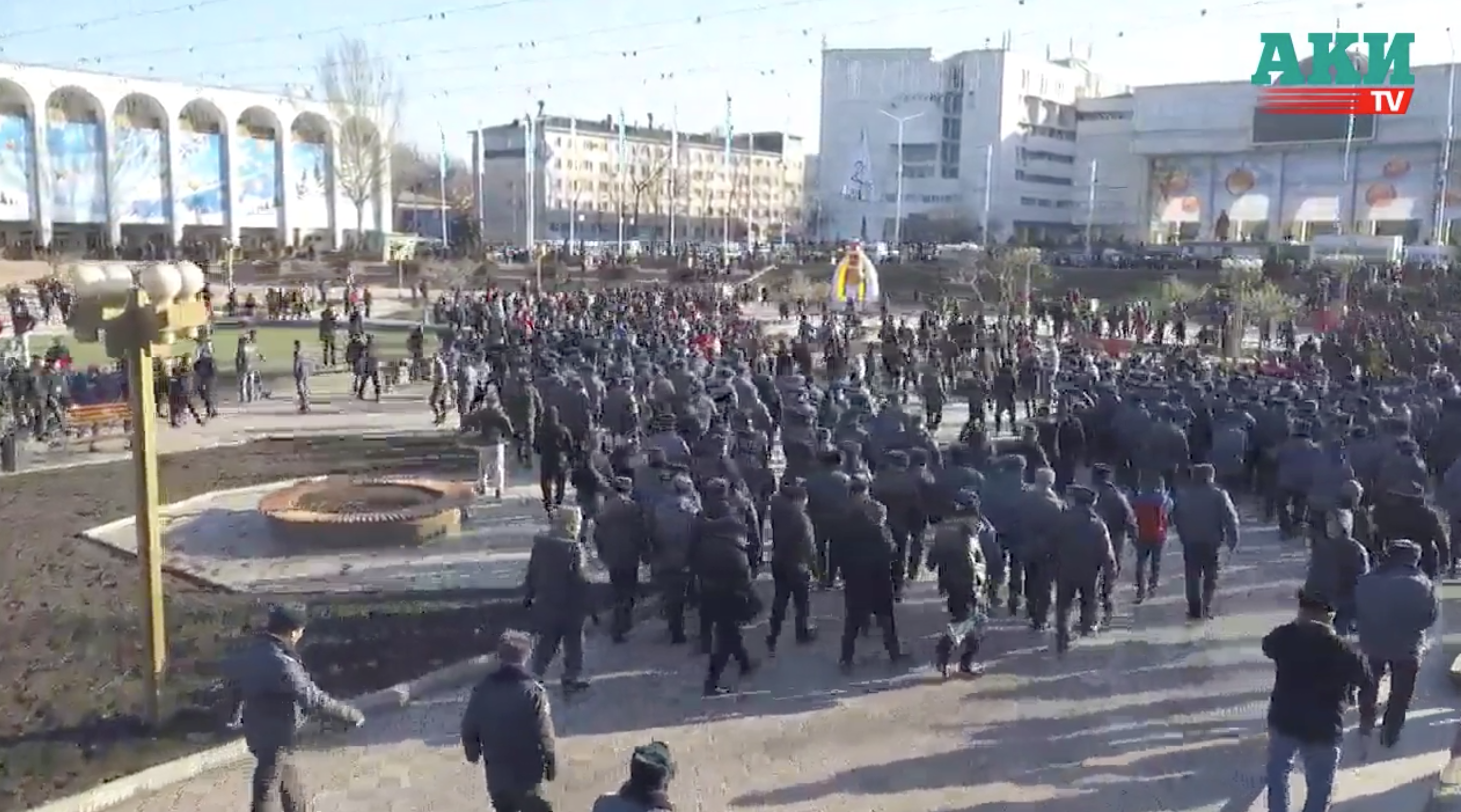 Hundreds rallied outside government offices in Kyrgyzstan’s capital on January 17 in a fresh show of unease at the presence of Chinese laborers in the country.

Various local media outlets estimated the turnout at anywhere up to 250 people.

The demonstration appears to have concluded without any significant trouble, although police were at one stage apparently required to deter rally participants from trying to enter the White House government building.

Rally organizers, who had anticipated a larger presence of demonstrators, laid out three demands: inspections of companies employing Chinese workers, a halt to Kyrgyz citizenship being granted to anybody but ethnic Kyrgyz people, and a government audit on how Chinese loans were secured and how the funds are being spent.

This was the second similarly sized anti-Chinese rally to take place in Bishkek in the space of the past two weeks.

The group behind the protest was Kyrk-Choro, an organization that has made headlines over the years for its typically incendiary nationalist stunts. While the group has justly earned its reputation for rabble-rousing, it is difficult to discern how much appeal its xenophobic platform enjoys among the broader population. In this instance, Kyrk-Choro has sought to spice up the issue by playing up tales of Chinese men marrying Kyrgyz women, ever a surefire way to excite passions.

Authorities are on the horns of a dilemma. Disregarding public sentiment about perceptions of mounting Chinese hegemony in the local economy may risk irking those who feel the government is indifferent to the scale of problems like joblessness. Addressing the complaints of players like Kyrk-Choro, meanwhile, endows marginal elements with more credibility than perhaps they are entitled to.

President Sooronbai Jeenbekov took a combative position when he spoke on January 9 about his disdain for what he described as trouble-makers trying to foment negative sentiments against Beijing. He and other top officials insist China is a wholly benevolent partner and that any attempt by activists to sour the relationship will be dealt with sternly.

“[Legislative] amendments developed by the State Migration Service are designed to protect the national labor markets from the inflow of low-qualified foreign laborers and to ensure citizens of the Kyrgyz Republic with access to vacancies in our country,” the service said in a statement.

Planned legislation envisions a 20 percent cap on the number of foreign nationals employed by local companies, the migration service said. A financial levy on employers hiring foreign nationals is also to be raised, the same statement said.

The figures belie talk of a huge surge in the number of Chinese nationals living in Kyrgyzstan long-term. The Foreign Ministry said in a statement on January 15 that Kyrgyzstan issued 7,210 one-year work visas to Chinese nationals in 2018. That was up from 6,307 visas of the same type in 2017.

There has been a big jump in the distribution of short-term tourist and business visas, however — up from around 6,000 in 2017 to more than 16,600 last year. But these kinds of documents allow the visitors to stay in the country for no more than three months.

“So this talk about tens of thousands of Chinese citizens supposedly remaining in our country for long periods of time has no basis in reality,” the Foreign Ministry said.

Those taking issue with such argument claim that many Chinese workers are present in the country without the proper paperwork and that this is why more workplace inspections are needed.

Additional impetus has been added to the anti-Chinese clamor by the ongoing situation in China’s Xinjiang province, which has a large ethnic Kyrgyz, Kazakh and Uyghur population. Beijing’s crackdown on the Muslim communities in the province has deeply affected ethnic groups with family ties to Central Asia and served to deepen skepticism about China’s goodwill towards the region.

The Kyrgyz Foreign Ministry in effect did Beijing’s bidding on January 9, when it issued a statement to the effect that the mounting variety of accounts about how Muslims in Xinjiang are being forcibly placed in internment camps were overstated. A ministry press release referred to “vocational education and training centers” in which diplomats “held joint conversations with students of the above institutions and got acquainted with the conditions of their stay.”