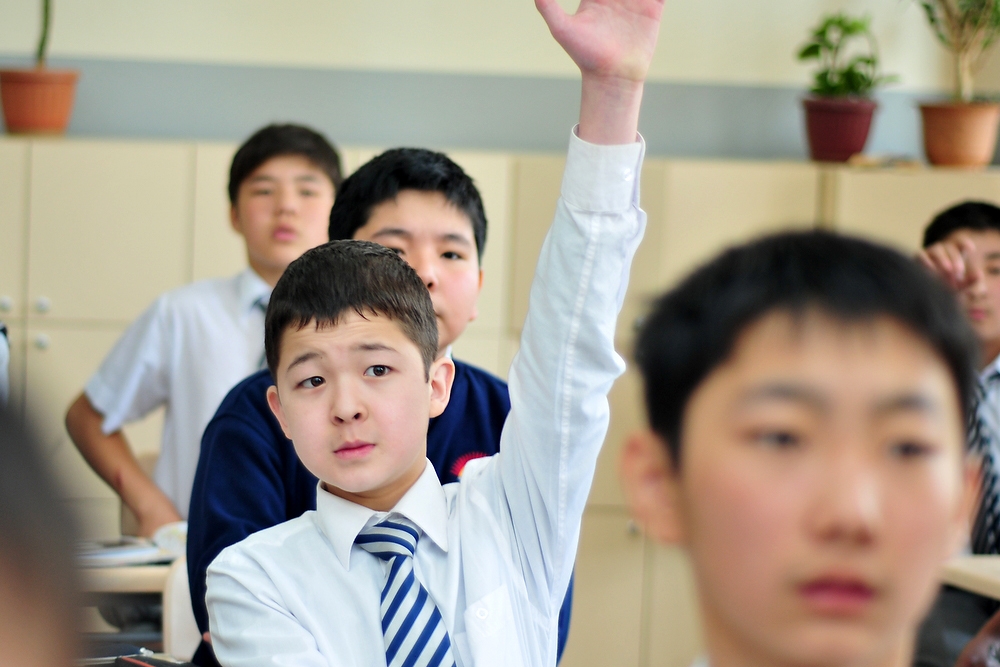 The Chingiz Aitmatov Kyrgyz-Turkish High School for boys in Bishkek is one of at least a dozen Gulen-linked schools and one university operating privately in Kyrgyzstan. Graduates from the Sebat foundation schools include Kadyr Toktogulov, Kyrgyzstan’s current ambassador to the United States, and Mar Topoyev, who has worked in the Kyrgyz presidential and prime minister administrations. (Photo: Chingiz Aitmatov Kyrgyz-Turkish High School)

The privately run Chingiz Aitmatov Kyrgyz-Turkish Boys High School stands out in its dusty setting in a northern suburb of Kyrgyzstan’s capital, Bishkek. Its record of academic achievement, drawing on the philosophy of US-based Islamic educator Fethullah Gülen, easily upstages anything most local public educational establishments can offer.

But in the eyes of the government of Turkey, where Gülen is from, the sprawling building immaculately cast in the bright colors of the red Kyrgyz flag is little short of an incubator of terrorism and plots to subvert the state.

Ankara’s antagonism to Gülen’s international influence has deep roots, and the Turkish government’s attempt to link the educator with the recent failed coup is intensifying that animosity. But Kyrgyzstan, which is host to at least a dozen Gülen-linked schools and one university, is holding its ground — up to a point.

“In Kyrgyzstan, the [Gülen] gang is very powerful,” said Turkish Foreign Minister Mevlüt Çavuşoğlu, during a working trip in the Antalya region on July 24.

If Turkey’s “brother” does not rid itself of links to the Islamic educator, “the way we look at you will be different,” Çavuşoğlu said, referring to Kyrgyzstan.

The remarks created a stir in Kyrgyzstan, which is accustomed to viewing Turkey as a no-strings-attached alternative for diplomatic engagement to Russia and the United States.

The tone in Turkey has shifted markedly in the last few weeks, however. As of July 26, 10,000 purported Gülenists have been arrested and many more judges, government officials and teachers fired. Çavuşoğlu’s rhetoric has been fittingly proactive.

“This terrorist organization has chosen Kyrgyzstan as a base. Its influence has grown so much that its members are part of the country’s leadership. We warned Kyrgyzstan that they are planning to land a blow,” Çavuşoğlu said in comments projecting a future coup in the Central Asian country.

Kyrgyzstan’s Foreign Ministry was nonplussed, castigating Çavuşoğlu on July 25 for raising the Gülen question “in the language of blackmail and ultimatums.”

But the statement fell short of promising to keep the schools open, leading many to speculate over their future. One present concern for Kyrgyz citizens is that Turkey could revoke the right to visa-free travel in order to get its way.

Other states enjoying warm relations with Turkey are for various reasons falling into line with Ankara’s aggressive new diplomatic stance.

Earlier this month, Azerbaijan gutted the administration of a popular private university linked to Gülen, who casts himself as a bridge between Islam and the secular, globalized world. That move was a natural evolution of established policy that saw Baku shuttering over a dozen Gülen-inspired schools in 2014.

Uzbekistan got a head start by phasing out the schools in the 1990s. Turkmenistan put the squeeze on the schools in 2011, back when Turkey’s conservative ruling Justice and Development Party (AKP) was still actively working together with its Gülenist then-allies to undo Kemalist political influences in Turkey.

But as independent political analyst Sheradil Baktygulov told Eurasianet.org, Kyrgyzstan “is a different type of state from Azerbaijan or Uzbekistan, with its different system of government and identity.”

“Shutting down private schools that local parents have invested thousands of dollars in for their children’s education without strong evidence of the threat they pose to Kyrgyzstan or Turkey is far more politically and legally problematic for us,” Baktygulov said.

Anecdotal evidence suggests that Çavuşoğlu’s conspiracy-mongering about a Gülenist-inspired takeover of the Kyrgyz government is wildly far off the mark. One source close to graduates of the Gülen-inspired Sebat foundation currently working in government told EurasiaNet.org that none are ardent followers of Gülen himself.

“They are younger than 40. They tend to prefer speaking Kyrgyz and English, rather than Russian, and often have a good knowledge of Turkish,” the source, who has experience working high up in the executive branch of government, told EurasiaNet.org.

Notable graduates cited by Sebat representatives in online media include Kyrgyzstan’s current ambassador to the United States, Kadyr Toktogulov, and Mar Topoyev, who worked as protocol chief in the presidential apparatus prior to 2010, before being transferred to a similar position in the prime minister’s office.

“Their age has kept them out of government, but they will come through soon as they have political ambitions. They are quite united and gather regularly. I think they are mostly good patriots with the right values. I don’t see any danger in them, for now,” said the source, who requested anonymity due to the political sensitivity of the issue.

According to graduates from both streams, there was not a lot of interaction between the rival institutions — which are now embroiled in an all-out slanging match in the Kyrgyz press — although their combined presence contributed to a positive image for Turkey.

“Of the two, the Gülen institutions are stricter,” said Daria Mamontova, an alumnus of the Turkish government-owned Kyrgyz-Turkish Manas University, whose rector last week made a speech foreshadowing Çavuşoğlu’s by touching on the havoc Gülenists might wreak in the country.

“Of course, both have their agendas. For Kyrgyz-Turkish Manas University it is Pan-Turkism. For the Gülen institutions, it is their ideal and earning money [for the network],” Mamontova told EurasiaNet.org. “But these are only [pushed] to a certain extent.”

Any reservations about the overall goals of the foreign-funded schools in a country where state-funded learning is riddled with graft will inevitably be weighed against their superior academic standards by middle-class parents and the under-pressure government alike.

“Tutors [at Gulen schools] actually motivate pupils to study,” Diana Jarkynbek Kyzy, the daughter of a doctor and lawyer and an alumnus of the Gülen-inspired Aichurek Girls’ school told EurasiaNet.org. “The closure of these schools would be a great pity.”