There are six confirmed cases to date. All returned from Mecca. 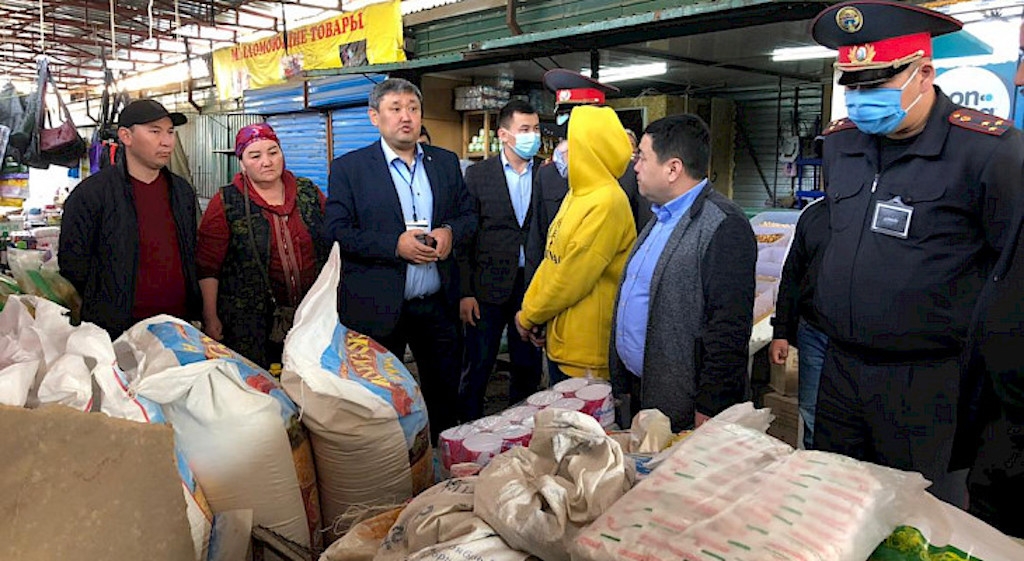 Market economy: Police at a bazaar in Bishkek checking to see traders are not price-gouging. (Photo: Kabar news agency)

Authorities in Kyrgyzstan have imposed isolated lockdowns in areas that are home to the country’s first six known carriers of novel coronavirus COVID-19, but many are trying to press on with life as normal, since doing otherwise may spell ruin.

All those who had been found to have been infected with COVID-19 as of March 20 are known to have recently returned from pilgrimages to the holy city of Mecca in Saudi Arabia.

The first three cases were reported on March 18. The men – who are aged 70, 62 and 46  – flew back to Kyrgyzstan on March 12 and were made to undergo a test before being allowed to self-isolate in their homes in the village of Blagoveschensk, in the Suzak district of Jala-Abad region.

Despite the instructions to self-isolate, one of the men reportedly hosted a feast to celebrate his return. Around 100 people are believed to have attended this event. A local official has said the trio may have been in contact with more than 1,000 people since they came back from their travels.

Since those coronavirus cases were confirmed, a state of emergency has been declared in the Suzak district. Entry points to the three villages in the district, which are collectively home to around 10,000 people, are being guarded by soldiers manning checkpoints.

A further three cases were discovered on March 20. Those people – aged 67, 71 and 77 – had also been on a pilgrimage and are resident of the Nookat district, also in the south, but in the neighboring Osh region.

Authorities in the country’s second largest city, Osh, have suspended public transport as a preventative measure. Restaurants in Osh and the city of Jalal-Abad have been sprayed with disinfecting chemicals.

Protective measures have so far been relatively piecemeal and fitful. On March 17, the government barred entry to foreign nationals, although Kyrgyz citizens are still permitted to return home.

Lawmakers are still mulling whether or not to push for imposing a state of emergency across the entire country.

Parliament met on March 19 to discuss the current situation, but a note of controversy was injected into the session by the presence of the lawmaker Tazabek Ikramov, who had just returned from the Suzak district. It is unclear how he was able to freely enter and leave the district, which is meant to be under strict lockdown.

Undeterred by his colleagues’ wariness, Ikramov delivered a status update.

“In the village of Kyzyl-Tuu, there are about 30,000 residents. We need to impress on the government that there are insufficient masks and cheap drugs. We need to pay more attention to them because they are in a state of isolation,” he is reported to have said. “I have spoken to the local community; they do not have enough medicine. This situation needs to be taken in hand.”

During the same session, lawmakers took part in an awareness campaign by having photographs taken of themselves holding up sheets of A4 bearing slogans urging enhanced public solidarity in a moment of crisis.

Between March 23 and 27, it is expected that MPs will fan out into the regions to brief communities about the lay of the land.

On the day the first coronavirus cases were detected, President Sooronbai Jeenbekov addressed the public and urged calm.

“The future depends not only on the efforts of state, but also on the behavior of each one of us. I urge you not to panic and to observe all precautions. The country has a sufficient supply of food. There is no shortage of medications. Any attempt to engage in speculation will be harshly suppressed,” he said.

As in many other parts of the world, large numbers of people have been visiting local supermarkets to stock up on essentials, such as flour, rice, pasta and tinned food.

Finding masks and hand sanitizers in pharmacies has become all but impossible. Partly because shortages, which had led to price hikes, but also as the currency, the som, is enduring a battering, off the back of similar turbulence affecting the Russian ruble. Kyrgyzstan’s economy closely tracks that of Russia.

The som has been stable at around 69 to the dollar for a few years, but it dropped to 72 on March 10 and then suddenly slumped to 85 this week. Officials are insistent, however, that the currency will return to normal in due time.

It would be overstating things to say there has been panic, however.

Many people are continuing to go to work as normal, albeit in masks, if they can find them. Some shopping centers in Bishkek have closed, but not all. Those that have kept their doors open are largely deserted. At the entrance to shopping centers and government offices, visitors are asked to use disinfect with hand sanitizer liquid.

Dordoi, a huge bazaar in Bishkek, is still operating. Damira Dolotaliyeva, the head of the national bazaar association, said markets would only be closed if the authorities instituted a nationwide state of emergency.

National Bank chairman Tolkunbek Abdygulov said on March 20 that the government is now studying the option of allowing owners of businesses affected by coronavirus defense measures to defer repayments on outstanding debts.

The owner of a Thai cafe in central Bishkek, Sumsarbek Mamyraliev, said he has far fewer customers these days, but that he has no choice but to remain open.

“Quarantine is a privilege not everybody can afford," he told website Capital KG in an interview. "We as a country cannot afford this. Ninety percent of my employees come from the regions and they have debts to pay off. They will continue to go to work even if we are placed under quarantine. They don’t do it because they don’t care, but because they have children. And when a child asks for food and the landlord for his money, you just have to go out and work."