The government is planning on pushing through legislation that will make life much harder for independent media. 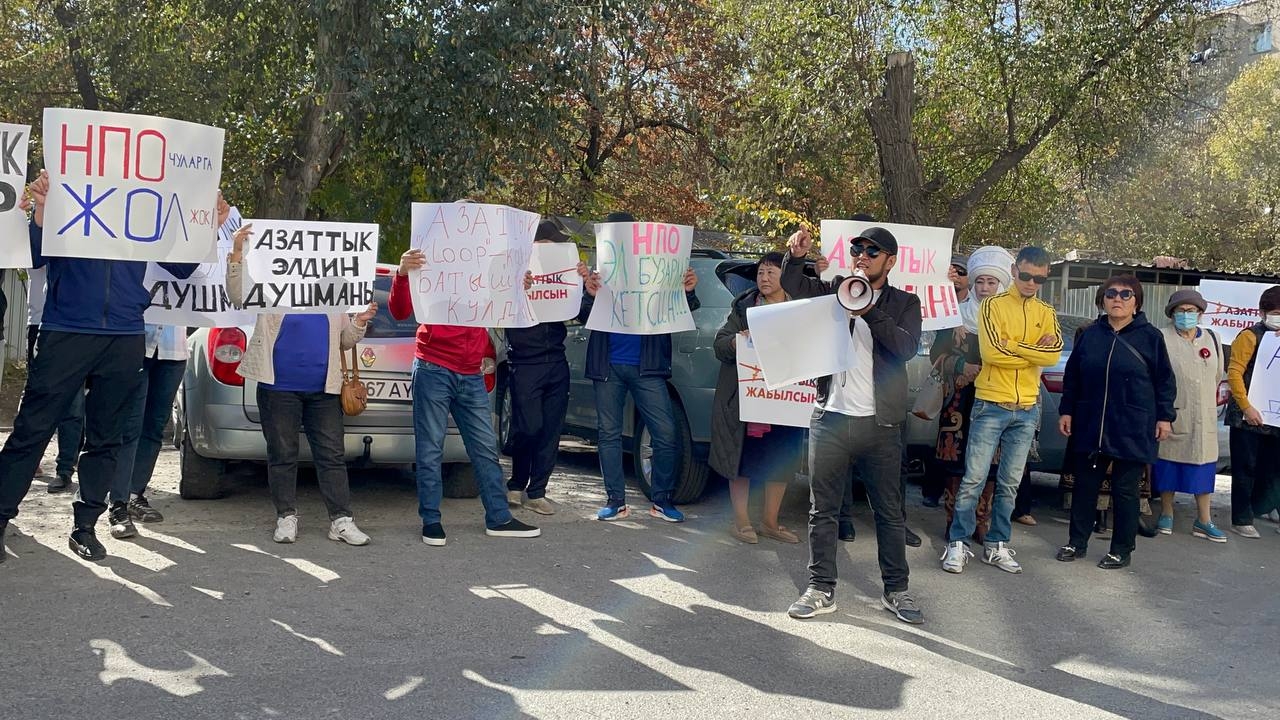 A rally of people calling for the closure of Radio Azattyk that took place outside the broadcaster's Bishkek offices on October 13. Attendees covered their faces with their signs so they could not be identified. (Photo: Kloop.kg)

A rash of arrests of activists and opposition politicians over the weekend in Kyrgyzstan left many startled. The move was in keeping, however, with a souring climate for the free press and critics of the government.

In one recent bellwether of troubles to come, a lawmaker earlier this month reportedly composed a petition addressed to President Sadyr Japarov to demand the closure of Radio Azattyk, the Kyrgyz service of the U.S.-government-financed media outlet RFE/RL, and two local outlets, Kloop and Kaktus Media.

Dozens of Kyrgyz notables, including many other lawmakers, reportedly signed the letter.

The letter stressed the fact that all three outlets received foreign funding and accused Azattyk of aggravating domestic tensions.

Shuttering the outlets, the letter’s authors stated, would be positive for Kyrgyzstan at a time when it was facing pressing challenges such as “the payment of external debts, the solution of border issues with neighboring countries and complex internal social and economic issues.”

Officials have displayed special irritation and unease at the degree of attention paid by activists and the media to an ongoing process to complete a border demarcation deal with neighboring Uzbekistan.

Critics of the agreement, which is currently undergoing expedited ratification in the Kyrgyz parliament, have cast it as a giveaway of land. Japarov and his allies describe that as a willful misrepresentation of the facts intended to sow unjustified public anger and lay the grounds for toppling the government.

Dastan Bekeshev, a lawmaker, has alleged that one of his colleagues, Nadira Narmatova, a long-time proponent of introducing a Russia-style foreign agents law in Kyrgyzstan, was behind the initiative to close Radio Azattyk, Kloop and Kaktus Media.

Narmatova has denied that claim. Many of the alleged signatories of the petition later denied that they had put their name to the appeal.

A major showdown with the media has felt inevitable for some time. Japarov and his close ally, national security services chief Kamchybek Tashiyev, have bristled when subjected to criticism.

In January, investigative journalist Bolot Temirov was arrested on narcotics charges just days after his team published a video investigation alleging that Tashiyev’s family had benefited from favorable contracts after his ascent to office. In a surprise development in late September, though, Temirov secured acquittal. The judge concluded in his ruling that the case had been concocted by Tashiyev’s agency, the State Committee for National Security, or GKNB.

In another high-profile case, the GKNB in March arrested the head of a television station founded by an opposition politician a few days after the broadcaster relayed claims, made by another outlet, that the Kyrgyz government was lending material support to Russia’s invasion of Ukraine. Next TV chief editor Taalai Duishenbiyev was later accused of “inciting ethnic hatred” and his station was taken off the air.

The founder of Next TV, opposition politician Ravshan Jeenbekov, was among those detained on October 23 on charges of planning to foment public unrest.

In a statement released in September, a trio of advocacy groups – Brussels-based International Partnership for Human Rights, Bishkek-based Legal Prosperity Foundation, and Johannesburg-based Civicus – signaled their distress at the “alarming trend” of civil society activists, journalists, bloggers, lawyers and others being subjected to “increasing intimidation and harassment.”

“Activists and journalists critical of the government have increasingly faced online threats, originating both from so-called social media trolls using fake accounts and from real government supporters,” the statement read. “Media investigations have shown that fake accounts systematically engage in efforts to praise those who pay them in Kyrgyzstan and attack their opponents, including political figures, journalists and activists.”

Beyond the isolated cases, there is every sign that the government is going through the motions of mounting a more sustained assault on the independent media’s scope for activity.

A draft media law backed by the presidential administration that is currently in the works will require all local outlets to re-register by June 2023 – and provide far more granular detail about their corporate structure and their sources of funding in the process – or face closure.

Detractors of the legislation say it contains numerous other provisions that will make the practice of journalism more complicated. Activists complain that directly affected stakeholders were not consulted during the writing of the draft bill.