Can the former president, in exile for 16 years, help the government's case that a major foreign investor has played dirty from the start? 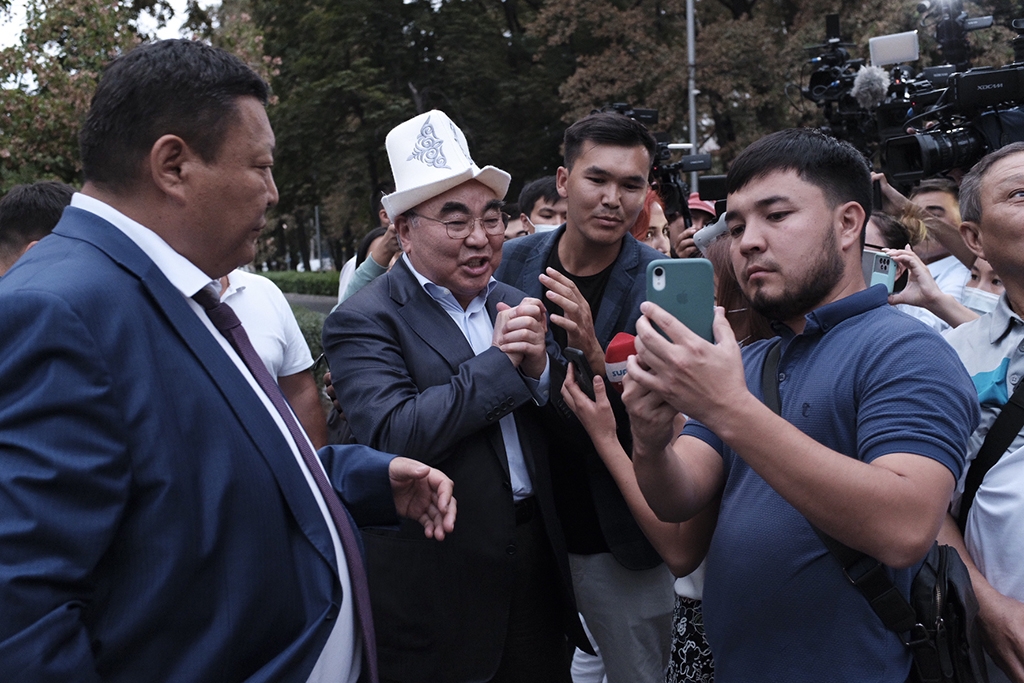 Akayev speaking to journalists in Bishkek on August 2. (Danil Usmanov for Eurasianet)

He was the last person anybody thought would be seen in Kyrgyzstan anytime soon.

Askar Akayev, a former president who has lived in exile in Russia since being overthrown in March 2005, caused widespread amazement on August 2 by flying into Bishkek to be met by representatives of the State Committee for National Security, or GKNB.

Local media have reported that he is being questioned as part of ongoing investigations into the granting of a concession for the Kumtor goldmine to Canadian investors in the 1990s.

“At the current time, Akayev is at the GKNB headquarters, where investigative activities are being pursued with his participation,” the agency said in a statement.

This shock return may have less to do with Akayev, however, and more with the legal dispute that Kyrgyzstan initiated in the middle of May, when it availed itself of a freshly acquired right to temporarily wrest control of Kumtor out of the hands of Toronto-listed Centerra Gold.

The three-month period of administration is due to expire later this month. Officials in Bishkek may hope they can gain some leverage by getting Akayev to volunteer allegations of corrupt practices when the concession for Kumtor was first granted.

GKNB chief Kamchybek Tashiyev announced on July 8 that a wanted notice was being issued for Akayev – as well as his successor, Kurmanbek Bakiyev, who was himself overthrown in 2010 – in connection with ongoing probes into Kumtor. There was little expectation anything would come of this declaration, however.

The speculation so far is that Akayev was provided with some form of assurances before consenting to return to his home country.

“As far as I am aware, Askar Akayev was not forced to return, and upon arrival in Bishkek he went by himself to the State Committee for National Security,” one former prime minister, Felix Kulov, told 24.kg news agency.

Kulov also described Akayev’s return to Bishkek after a 16-year absence as a “show of generosity” by President Sadyr Japarov.

“He would hardly have flown back here without some kind of guarantees, that much is clear,” he said in an audio message posted to his Telegram account. “I think that some agreement has been reached by the authorities and Akayev. The point is that we just don’t know what that agreement was.”

Bekeshev further speculated that “some amount will [be paid into the state] budget, or something else will be given in return.”

This last remark was an allusion to an emerging fund-raising practice of catch-and-release being operated by the Japarov regime.

In March, for example, the GKNB reportedly agreed to drop eight criminal cases against multimillionaire former Prime Minister Omurbek Babanov in return for the businessman-politician paying 100 million som ($1.2 million). That did not stop the GKNB from going after Babanov again and detaining him in May, also on Kumtor-related charges.

That saga has ended, for now, with a surprising departure from Kyrgyzstan. Late last month, Babanov, 51, was permitted to leave the country to seek treatment for an unspecified ailment. It is not known what precipitated this uncharacteristic change of heart by the Kyrgyz authorities.

Another contentious figure, corrupt former customs boss Rayimbek Matraimov, was arrested last year and then purportedly paid $24 million – a small fraction of the hundreds of millions that journalists claim he defrauded the state through his smuggling operations.

The government is resorting to all manner of measures to keep the country afloat through the economic crisis caused by, among other things, the COVID-19 pandemic and drought. Parliament last week held an extraordinary session to hastily adopt legislation regulating how and when the government may declare an “economic state of emergency.”

If inflation and debt soar beyond certain parameters and trade, tax revenues and foreign investment contract rapidly, the government will be empowered to adopt radical fund-raising actions without parliamentary consent.

The climate for foreign investors has been grim for decades already, but signals that the authorities may now be resorting to historic grievances to further pressure the operators of Kumtor – by far the country’s most important industrial concern – is only likely to worsen moods.

Centerra Gold on May 16 announced it was initiating arbitration procedures against Kyrgyzstan in response to the placement of its Kumtor subsidiary under what Bishkek has termed “external management.”

The miner doubled down on July 7, announcing that it was adding fresh claims to its arbitration case “to hold the Kyrgyz government and [state-owned gold miner] Kyrgyzaltyn JSC responsible for any and all losses and damages that result from their coordinated campaign to seize the gold mine in violation of longstanding investment agreements and without compensation to Centerra.”

The Kyrgyz counterstrategy appears hinged on seeking to demonstrate during litigation procedures that the concession was built on corrupt foundations from the outset.

Although the terms under which Kumtor is developed have been repeatedly chopped and changed over the decades, the very first agreement on the mine, one of the largest in the world, was reached in 1992 – a period when Kyrgyzstan was on the verge of economic collapse. Some more tinkering was done to the contract in 1994.

Before Centerra Gold appeared on the scene, at the start of 2004, the Kyrgyz government held a 67 percent stake in Kumtor through Kyrgyzaltyn, while Canadian company Cameco Corporation had the rest. A restructuring of that arrangement saw newly formed Centerra Gold coming into control of 66 percent of the project.

All these developments occurred under Akayev’s watch.

Government investigators contend that there were instances of graft along every step of that convoluted way.

Kumtor is more than just a bone of financial contention for President Japarov. The nationalist rabblerouser has built much of his political brand around the mine and has since the early 2010s been actively campaigning for its nationalization.

In 2012, he and Tashiyev, who is now running the security services, were arrested after trying to storm into the parliament building during a protest summoned to call for Kumtor’s nationalization.

After coming to office in October, however, Japarov slightly tempered his position, claiming that he would permit Centerra Gold to develop the resource to the end of its natural life.

His attitude looks to have shifted again.

In June, exactly one month after Kumtor had been taken into temporary administration, Japarov revealed during a visit to the work-site that Kyrgyzstan had made $40 million off the mine since it had taken charge.

Investigators may hope Akayev will be the key to keeping that cashflow going.