Kyrgyzstan: As another young woman is murdered, anger and frustration escalate 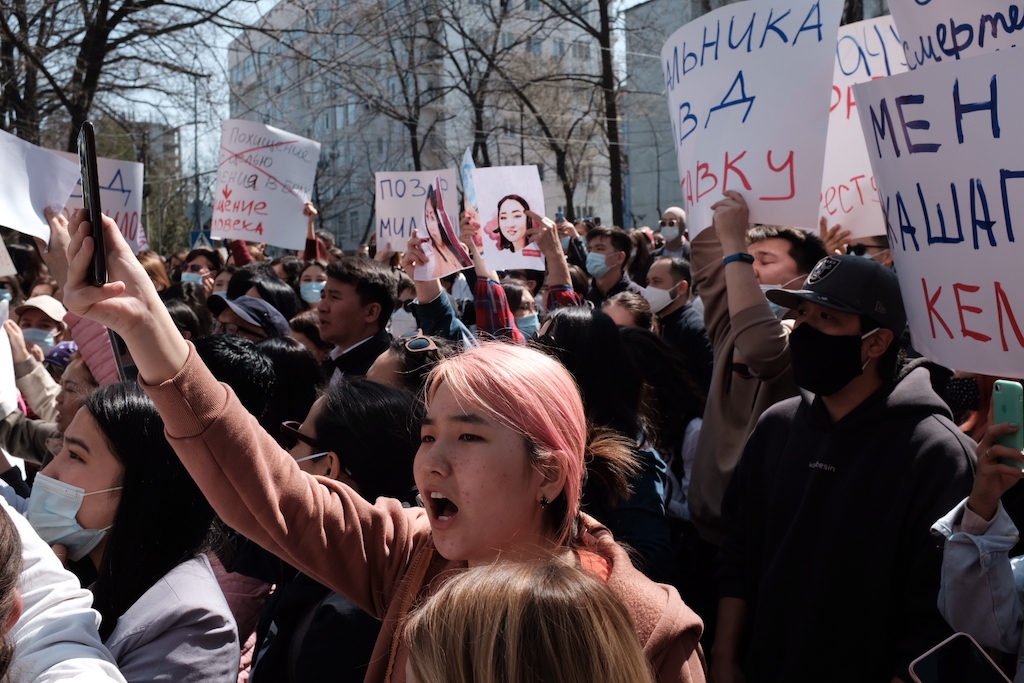 Aizada Kanatbekova, 27, was snatched off a central street in Kyrgyzstan’s capital early on the morning of April 5 as she was on her way to work. Hours later, she was dead.

The kidnapping was allegedly masterminded by a man frustrated by Kanatbekova’s rejections of his insistent overtures. Police say the suspect, a 36-year-old, committed suicide after strangling the young woman.

The public is shocked by the killing, although they are by now inured to the epidemic of violence directed toward women. Anger on this occasion is being directed at the police and their perceived failure to act in a timely fashion.

A crowd of several hundred people gathered outside the Interior Ministry on April 8, demanding the resignation of the minister. One held up a sign reading: “How many of us need to die before the kidnapping stops?”

Part of the crowd marched on the government house, where they were addressed by Prime Minister Ulugbek Maripov, who pledged that an exhaustive investigation would be undertaken. He left to chants of “shame, shame.”

Kanatbekova’s kidnapping was documented from the first instant. A close-circuit camera captured the scene as three men ambushed the woman and bundled her roughly into the back of a metallic red Honda Civic. The license plate was visible in the shot.

The day after Kanatbekova went missing, her family made desperate appeals to the police and described the suspect. To no avail.

“He is more than 30 years old. We told him repeatedly to leave our little sister alone,” a relative told 24.kg news agency on April 6. “Her mother filed a police report, but they are taking no measures to look for her. Her mother is now very worried about her daughter.”

One day after that, police received a tip from a member of the public saying he had come across the Honda Civic with two bodies inside. The car was in a field outside a village around a 25-minute drive from the spot where Kanatbekova had been kidnapped. The eyewitness said he had seen the car on April 5, but assumed it had just got stuck in the mud.

Police say preliminary evidence indicates Kanatbekova was strangled and that her kidnapper committed suicide by “inflicting several knife wounds to his own body.”

In a press conference on April 8, the police told reporters that they managed to get the kidnapper on the phone on the day of the abduction.

“Around four o’clock, we called Zamirbek [Tenizbayev] and asked him where they were and we told him to come in,” said Ulan Aitbayev, a senior Bishkek police officer. “To that he answered: ‘We’ve been going out for four months. We wanted to get married. Don’t interfere.’ And he hung up.”

The Interior Ministry has said Tenizbayev had a criminal record in Russia, where he served a six-and-a-half-year prison sentence for robbery.

Maripov commented on Kanatbekova’s killing on April 7 and said the perpetrators of her kidnapping would incur “inevitable criminal punishment.” At least one suspected accomplice has been captured.

“First of all, as a human being, as a man and a father, it was with great bitterness that I learned of the tragic incident that happened with Aizada. This is our shared pain. The public must develop an absolute sense of intolerance toward such cases,” Maripov said.

Such sentiments are not novel, however. They are repeated every time a particularly grisly crime hits the headlines.

There are two interrelated problems at play here. One is the ubiquity of violence toward women.

Stories of deadly domestic violence are legion in Kyrgyzstan. News website Kloop has compiled a database documenting at least 300 such killings since 2008 and suggested the true number may be much higher.

Kanatbekova’s death was precipitated by another social scourge: bride-kidnapping. The United Nations in 2018 estimated that almost 14 percent of women under 24 were married through coercion. Police said that same year that they had received 895 separate reports of bride-kidnapping incidents over a five-year period. In the vast majority of cases, victims did not file charges against their abductors.

Authorities did stiffen penalties for bride-kidnapping in 2013, although to little evident effect. Offenders face up to seven years in prison for the crime, and 10 years in prison in cases involving minors.

The problem, as activists have been insisting for years, lies in enforcement and policing.

Kanatbekova’s name will join that of Burulai Turdaaly kyzy in the grisly catalogue of cases where the police failed to act in preventing a tragedy.

In May 2018, 19-year-old Turdaaly kyzy was, like Kanatbekova before her, singled out for kidnapping. When she went to a police station to report the incident, she was placed in a room alone with her alleged abductor, Mars Bodoshev, who stabbed her to death.

In December that year, Bodoshev was sentenced to 20 years in prison.

Despite such high-profile episodes, public attitudes to bride-kidnapping, whose proponents argue on spurious grounds that the practice dates back to antiquity, are nonetheless divided. That much was clear from an Instagram post documenting the moment of Kanatbekova’s abduction.

Most expressed disgust and revulsion. Some dissented from that line, however.

“Why didn’t she resist?” one person wrote in a comment peppered with smiley faces. “I hope it’s a happy ending. You can tell straight away that these guys are her acquaintances. The police probably know who and where they are. Let’s wait for the good news."