Arrests are coming swiftly for opponents of Kyrgyzstan's new president. 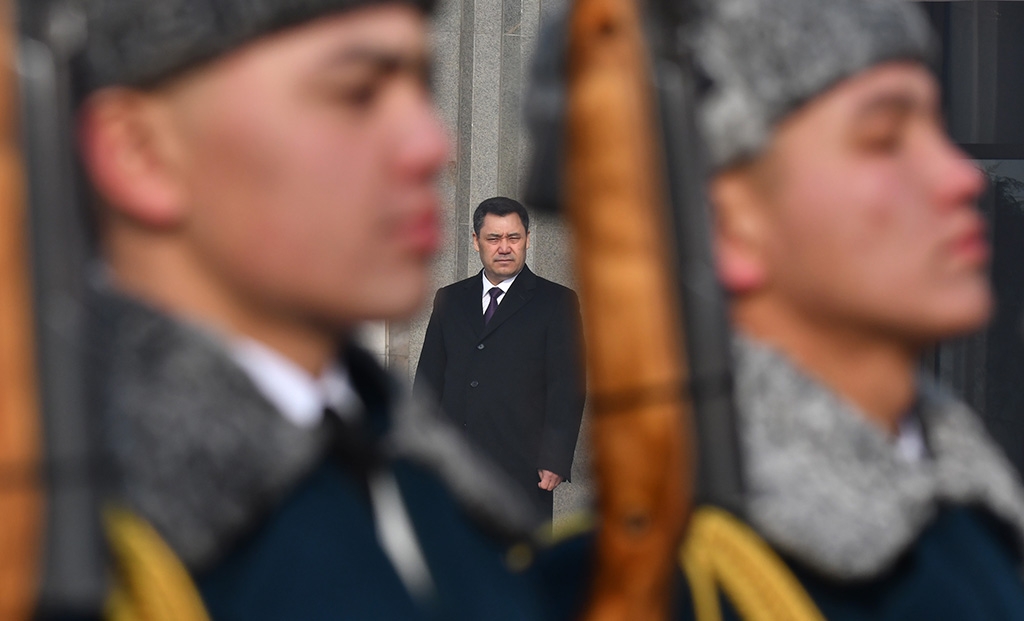 The new president appears unafraid to use his new powers. (government handout)

It was to be expected. The merry-go-round of politically tinted jailings has increased its tempo now that Sadyr Japarov has been elected to the presidency with a comfortable margin.

The authorities are doing little to dispel the impression that this is a matter of settling scores. Those now being thrown behind bars are the same people who were in power when Japarov was imprisoned on kidnapping charges in 2017.

In truth, even those wary of Japarov’s authoritarian inclinations may conclude this is just the chickens coming home to roost.

On January 25, the Military Prosecutor’s Office announced that the former head of the State Committee for National Security, known by its Russian-language initials, GKNB, had been placed in custody. Abdil Segizbayev is being investigated on charges of abuse of office, prosecutors said.

The charges are linked to a curious corruption case from 2016 popularly known as Belizegate. The targets of that Segizbayev-led probe were Omurbek Tekebayev and fellow opposition politicians, the former General Prosecutor Aida Salyanova and ex-Justice Minister Almambet Shykmamatov, who were accused of conniving to make money from a shady telecoms deal.

The whole case seemed highly fishy from the outset. The flimsy evidence produced by Segizbayev included documents supposedly provided by the authorities in Belize, which were said to attest to some of the suspect transactions.

The real intent here, though, was apparently to take down a trio of politicians opposed to constitutional reforms that were being pushed through by then-President Almazbek Atambayev. Investigators are now suggesting Segizbayev simply forged the documents – not an unsafe assumption.

Shykmamatov filed a criminal complaint against Segizbayev in 2019, once Atambayev was safely out of power. But prosecutors dismissed the petition, saying it had discovered no evidence a crime had been committed. It has now had a rethink.

“At the current time, pretrial investigations are being conducted to establish the identity of all people involved,” prosecutors said in their statement.

Evidence notwithstanding, the timing is awkward. Segizbayev is fresh from running against Japarov in the January 10 presidential election.

Segizbayev may face other charges too. On January 22, the General Prosecutor’s Office announced that it was investigating claims that he had unlawfully transferred government-owned grazing land into private hands for development.

Segizbayev accurately predicted all this was coming. He said even before the election that he anticipated his arrest and prosecution.

He is not the only recovering presidential candidate facing fresh legal troubles.

On January 26, the Interior Ministry said it had detained its own former deputy chief, Kursan Asanov. He is being accused of seizing the Interior Ministry building during the political unrest in October. This was the very same upheaval that brought Japarov to power, also through the seizure of important institutional buildings.

Asanov’s lawyers have described the accusations as “politically motivated.”

Asanov had served as deputy head of the Interior Ministry from 2011 to 2019. He was fired in August 2019 by then-Prime Minister Mukhammedkaliy Abylgaziyev. His downfall was precipitated by his conduct during the August 2019 storming of former president Atambayev’s countryside redoubt – an episode from an earlier cycle of political turmoil. Officials accused him of “betraying the interests of the Kyrgyz police” by failing to heed instructions from his superiors. Asanov has stated he acted as he did to avoid the unnecessary spilling of blood.

Asanov spied a fresh chance at power in the tumult that followed the disputed results of the October 4 parliamentary election. Without seeking approval, he took over the Interior Ministry and even presided over several working meetings, seemingly on his own authority alone.

With the week, he had once more been arrested by the GKNB on charges of organizing “mass unrest” – a remarkable situation in light of how Japarov insists it was he that was the moving force behind the ouster of President Sooronbai Jeenbekov.

Despite all this, Asanov managed to file the paperwork to make a run for presidential office and was allowed to roam free during the campaign season. He got around 0.5 percent of the vote, even worse than Segizbayev’s 1.5 percent.

Perhaps one small consolation for Asanov is that the man who fired him in 2019, ex-PM Abylgaziyev, also ended up behind bars on January 26.

Charges of “unlawful enrichment” are based on allegations that while in office Abylgaziyev improperly signed a government decree granting additional territory for development to the Kumtor goldmining company. The GKNB said in a statement that while in government, Abylgaziyev became notably and suspiciously wealthier. It claimed that the former PM had bought expensive real estate and got involved in construction through fictitious intermediaries.

Medet Tiulegenov, a professor at the American University of Central Asia, identified three motivations for going after political figures in this manner.

“One of them is revenge, personal resentment. The second is to eliminate competition,” he told Eurasianet. “The third motive may be the guise of fighting corruption, because many cases involve abuse of authority and corruption. This can become the fulfillment of campaign promises to combat corruption.”

Japarov must feel most exposed on that last point. Former officials are indeed being scooped up by law enforcement authorities with unsettling frequency, but some of the most prominent arrests have looked decidedly theatrical. While foes will get rough treatment, potential allies are having an easier go of things.

One notable example was what happened to former customs boss Rayimbek Matraimov, who is accused by anti-corruption activists of lining his pockets with hundreds of millions of dollars that should have gone into the state’s coffers. Matraimov was arrested on October 20 in what looked like a choreographed exercise. He was then released within the day. People arrested this month have not been handled so kindly.