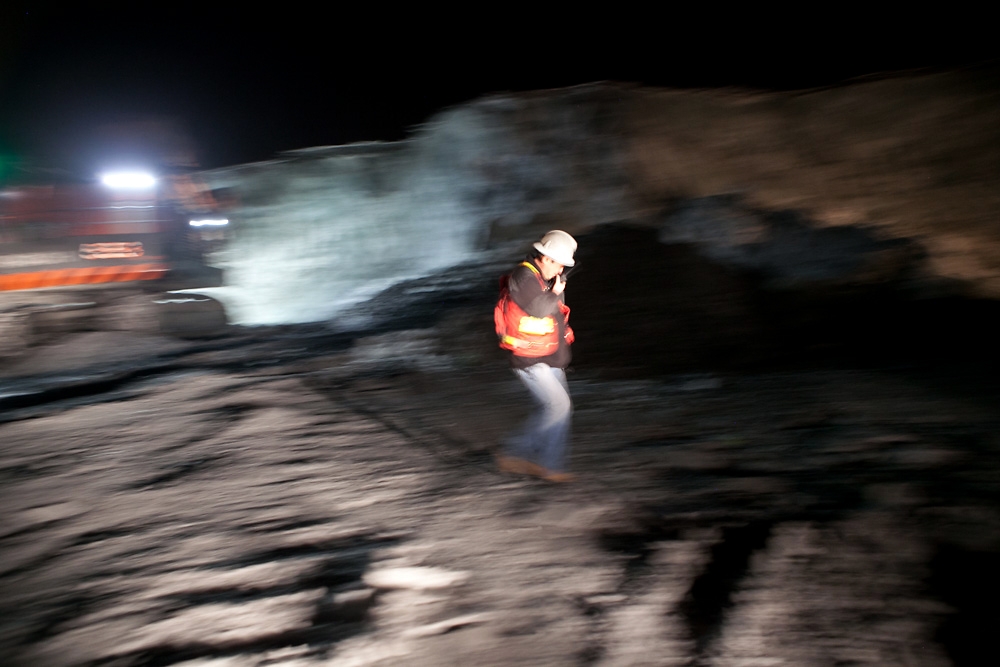 Earlier this year, the Kyrgyz parliament agreed to form a new joint venture with Toronto-listed Centerra Gold, which owns the high-altitude Kumtor Gold Mine, seen here with workers in the pit at night in February 2013. But upcoming parliamentary elections appear to be stalling the negotiations. (Photo: David Trilling)

Nine months after Kyrgyzstan and its largest investor outlined restructuring terms for the country’s largest gold mine, negotiations are again sidetracked. With parliamentary elections less than a year away, some lawmakers are once more beating the nationalization drum.

Back in February, parliament agreed, after a heated year-long dispute that often spilled into the streets, to form a joint venture with Toronto-listed Centerra Gold, which owns the high-altitude Kumtor Gold Mine. Under the restructuring roadmap, in return for a 50-percent stake in a new company that would manage and own the mine, Kyrgyzstan would relinquish its 32.7-percent share in Centerra. Kumtor is Kyrgyzstan’s largest industrial asset and accounts for up to 10 percent of GDP in a good year.

Though both Centerra and the Kyrgyz government insist talks continue, events seem to be overtaking any such discussions. For starters, another mining company has managed to freeze a majority of Kyrgyzstan’s Centerra shares. And a criminal case in Bishkek has compelled several of Kumtor’s top managers to flee the country. In addition, a climate of fear seems to be paralyzing decision makers in Bishkek.

“A lot of people in government are afraid to sign any contracts,” said Kylychbek Shakirov, deputy chairman at the state gold company Kyrgyzaltyn, and a member of Centerra’s board.

Such reluctance is connected with Kumtor’s shaky reputation: it has been dogged by corruption allegations almost since the first ore was extracted in 1997. Another factor is the country’s history of political turmoil, which has prompted frequent governmental turnover. Given these conditions, officials involved in the Kumtor process at all levels fear that a future government could potentially prosecute them on charges, real or fabricated, for any decisions they make now.

For these officials, “it is much easier right now to take a defensive position [and not sign anything],” Shakirov said. “They do not understand that this [the Kumtor restructuring] is about the future of the republic. The deal is fair.”

The hesitation to finalize the agreement has enabled one of many disgruntled foreign investors to inject itself into the Kumtor situation. In October, a mining company with no prior financial interest in Kumtor, Toronto-listed Stans Energy, effectively placed a lien on Kyrgyzstan’s stake in Centerra – virtually Kyrgyzstan’s only foreign asset.

Earlier this year, Stans won a $118-million award in an arbitration case heard at the Moscow Chamber of Commerce and Industry, claiming the Kyrgyz government illegally revoked its license to the Kutessay-II rare earths metals deposit in 2012. When Kyrgyzstan refused to pay up, Stans filed suit in Ontario’s Superior Court of Justice, which froze 60 percent of Kyrgyzstan’s shares in Centerra.

Kyrgyzstan did not participate in the Moscow arbitration hearings. Prime Minister Djoomart Otorbaev called the Moscow decision “absolutely lawless,” and told EurasiaNet.org he was surprised when the Ontario court “accepted this strange, self-appointed court’s decision.”

Stans Chairman Rodney Irwin – who is, ironically, Kyrgyzstan’s honorary consul to Canada – explained to an industry newspaper last year that his company chose to sue Kyrgyzstan in Moscow to save money, and because Stans believed the case would proceed “much more quickly” than in other jurisdictions.

Though some argue the Stans case has merit, independent observers question the Moscow court’s jurisdiction. Luke Peterson, editor of Investment Arbitration Reporter, called Stans’ decision to pursue arbitration in Moscow “a gamble.” If Stans had been “more patient,” said Peterson, “they would have obtained a verdict that is less prone to being picked apart by courts in Canada, or elsewhere.”

Centerra has warned that no restructuring can take place until the Stans case is resolved; should it stand, the February restructuring roadmap would fall apart.

Another sticky point is a criminal case against the former head of Kyrgyzaltyn, the state gold company that holds Kyrgyzstan’s shares in Centerra. In May, Dilger Japarov was arrested for transferring dividends from Kyrgyzaltyn to Centerra – a transaction several insiders described as routine. Centerra denies wrongdoing.

Following the arrest, three senior Kyrgyzstan-based Kumtor managers fled the country, fearing Kyrgyz prosecutors would, in the words of one local Kumtor executive, detain them on “fake charges.” A Centerra spokesman in Toronto confirmed that the company has also forbidden several senior managers to travel to Kyrgyzstan in light of the criminal case.

“This is holding up all the negotiations,” said the Bishkek-based Kumtor executive.

Otorbaev, the prime minister, confirmed the criminal case is delaying negotiations. The two parties “are negotiating over the web, telephone, Skype, so it takes longer. But by the end of this year, we are going to present to parliament the draft of the agreement we have with Centerra.”

The chairman of a local mining union has estimated that, by then, the restructuring delays will have cost Kyrgyzstan $65 million in potential revenue.

Meanwhile, leading nationalist lawmaker Omurbek Tekebayev has renewed his push to have the state expropriate the mine. A senior government mining official in Bishkek says that Tekebayev is politicizing the issue with an eye on elections next fall: “Without the deal, it will be a catastrophe. It will set the country back 25 years.”

Tekebayev did not respond to requests for comment on November 19.

The prime minister called the Kumtor negotiations “very politicized,” but argued that Kyrgyzstan is learning from the process. “Our electorate, our public, our people understand more and more what Kumtor means to the country: jobs, taxes, additional resources, the investment climate. People are not like animals that listen only to a few politicians,” Otorbaev said.

Still, business executives are exasperated the government has not done more to put the Stans suit and myriad other ongoing arbitration suits to bed. One Bishkek-based executive recalled trying to explain to President Almazbek Atambayev why the arbitration cases are hurting investment: “He didn’t seem to understand why this is important,” the executive said.

In an indicator of the depth of pessimism in business circles in Bishkek, several executives said they long for governance at least as efficient as that in Russia, a country that many entrepreneurs often call lawless.

Without a Kumtor deal, it is hard to imagine Kyrgyzstan being able to repair its tattered investment image anytime soon. Officials are preparing to auction another high-profile gold deposit, Jerooy. But a tender failed last year, most likely because a Kazakh company is suing Kyrgyzstan for $400 million to return the license it says was unjustly canceled in 2010.