Cases are rising rapidly and vaccines – for those who want them – are hard to find. 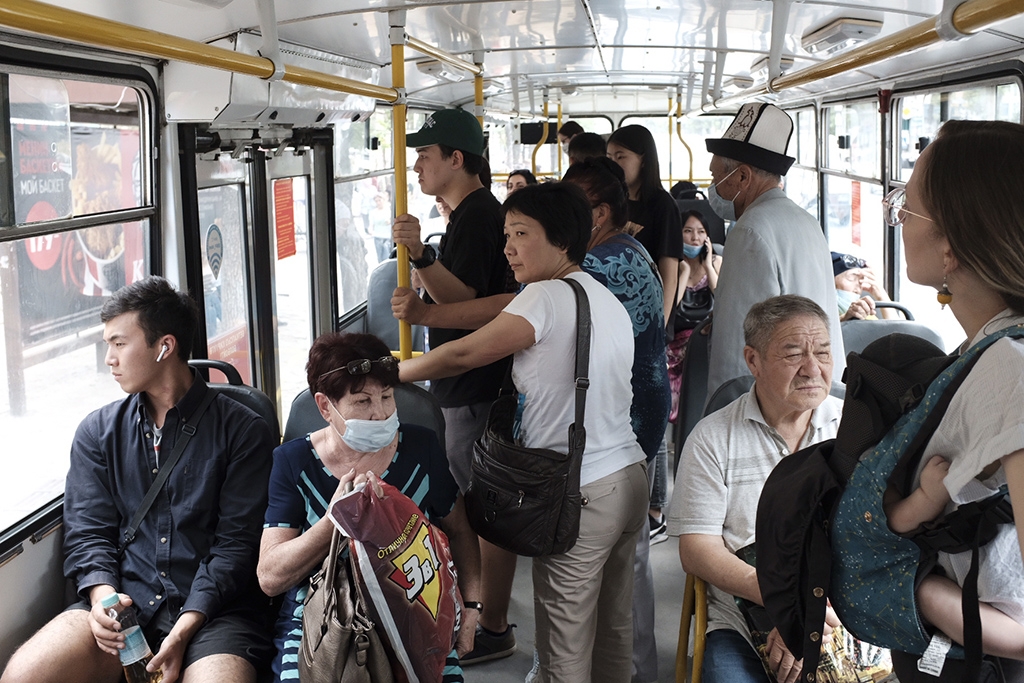 Inside a Bishkek bus on June 24: Health officials say the virus is spreading because people are flouting basic advice, like wearing masks and social distancing. (Danil Usmanov)

Even as Kyrgyzstan grapples with its third wave of COVID-19 infections, a surge that doctors worry could overwhelm the healthcare system, the president says the country cannot afford the cost of adopting precautionary measures.

The Health Ministry issued its determination that another wave was assailing Kyrgyzstan on June 15, but the signs had been apparent weeks before.

The number of registered COVID-19 cases in May, for example, was four times what it was in March, according to official data. And if on May 23, 308 cases were detected, that number for June 24 was 822.

The Health Ministry says nearly 2,500 people are currently receiving inpatient treatment. Around one-third of those are critical cases.

There is no available evidence yet that the highly infectious Delta variant that emerged in India has reached Kyrgyzstan, although it has been found in neighboring Kazakhstan and Uzbekistan. The Health Ministry said last week that it sent test samples gathered in March-April to the World Health Organization and found around 44 percent of cases to be of the Alpha variant that is believed to have first prevailed in Britain.

In an echo of previous surges, the country’s two main cities, Bishkek and Osh, are the primary infection hotspots. Health officials say the number of infections seen there over the past week exceed the national average by a ratio of 2.6 and 3.6, respectively.

The cities have accordingly been designated red zones, meaning that a range of restrictions are ostensibly in place. These include prohibitions on cafes allowing gatherings of large groups of people and the obligatory use of face masks.

Health officials freely admit, however, that the spread of the virus is being enabled by non-compliance with recommendations on mask use and social distancing. Even people showing signs of having contracted the coronavirus are failing to abide by requirements for self-isolation, they say.

Few people on public transport in Bishkek or Osh wear masks and people asked to do so by security guards as they enter large shopping centers quickly remove them once inside.

“People are behaving negligently, the situation has become critical,” 48-year-old Bishkek taxi driver Urmat Kasymaliyev told Eurasianet. “I was at the bazaar yesterday and 90 percent of people were without a mask. At malls, they don’t even have hand sanitizer.”

Yegor Borisov, deputy director of the Bishkek Emergency Medicine Center, told Eurasianet that he is seeing a spike in ambulance callouts.

Borisov said doctors are coping, but are growing tired and worn-out, especially because first responder capacity is becoming stretched. And while there are no problems yet with availability of ambulances and drugs, the number of free beds is posing a worry.

“There are slots in hospitals, but if the number of patients increases further, we do not know how the situation will develop,” Borisov said. “If there is a growth [in case numbers], additional in-patient clinics and beds will be deployed.”

An assessment by news website Kaktus of the load currently being placed on hospitals paints a more troubling picture. Kaktus says that its reporting has found the capital has only 44 ventilators per 1 million people and that some hospitals have no vacant spots for COVID-19 patients.

And RFE/RL’s Kyrgyz service, Radio Azattyk, quoted epidemiologist Aizhan Dooronbekova as saying that if Kyrgyzstan keeps going as it is, it may see the “worst-case scenario” by early July.

“If citizens follow the rules and do not visit crowded places, and the state introduces restrictions, then the situation will change. If we continue to behave as we are doing now, then by the beginning of July the number of daily infections may reach 1,500,” Dooronbekova said.

More ominous projections have been charted by British medical journal The Lancet. Its forecast model placed Kyrgyzstan among a few countries in the world whose mortality rate per 100,000 people between June 1 and August 31 could range as high as around 500.

The sluggish vaccination campaign is not helping. Since jabs started to be offered in March, only around 99,000 people have received a first shot – that is a mere 1.5 percent of the overall population. The government’s target is for at least 45 percent of the population to get free vaccinations.

Supplies are tight. In mid-March, Kyrgyzstan took delivery of 150,000 doses of vaccines produced by China’s Sinopharm. The delivery of 20,000 vials of Russia’s Sputnik V came in April, followed by another batch in May; 80,00 more arrived on June 17.

Kyrgyzstan has for weeks also been expecting to receive 420,000 doses of Indian-produced AstraZeneca vaccine provided under the COVAX mechanism, but that delivery has been chronically delayed.

Sputnik V is now being used to vaccinate people over 65 and those with chronic health conditions. Sinopharm’s vaccine is instead earmarked for younger people.

Matters are not being helped by a lackluster public information campaign on the usefulness of vaccination and the circulation of scare stories. The president and health minister have done their bit in muddling the public by repeatedly advising them to ward off the coronavirus by drinking brews made with wolf's-bane, a plant that can be poisonous if improperly consumed.

One lifeline has come from the World Bank, which earlier this month committed to provide Bishkek with $20 million to acquire more vaccines and bolster its healthcare system.

Meanwhile, intensifying restrictions on movement as a way of tempering the outbreak has been ruled out. President Sadyr Japarov said on June 23 that the country simply could not afford it.

“There is an increase in sickness and the situation continues to worsen. Despite this, we are not bringing in lockdowns and strict restrictions because the economy is in bad shape,” he told a meeting of businesspeople.