Kyrgyzstan: Askarov Given Appeal Hope But Remains in Jail 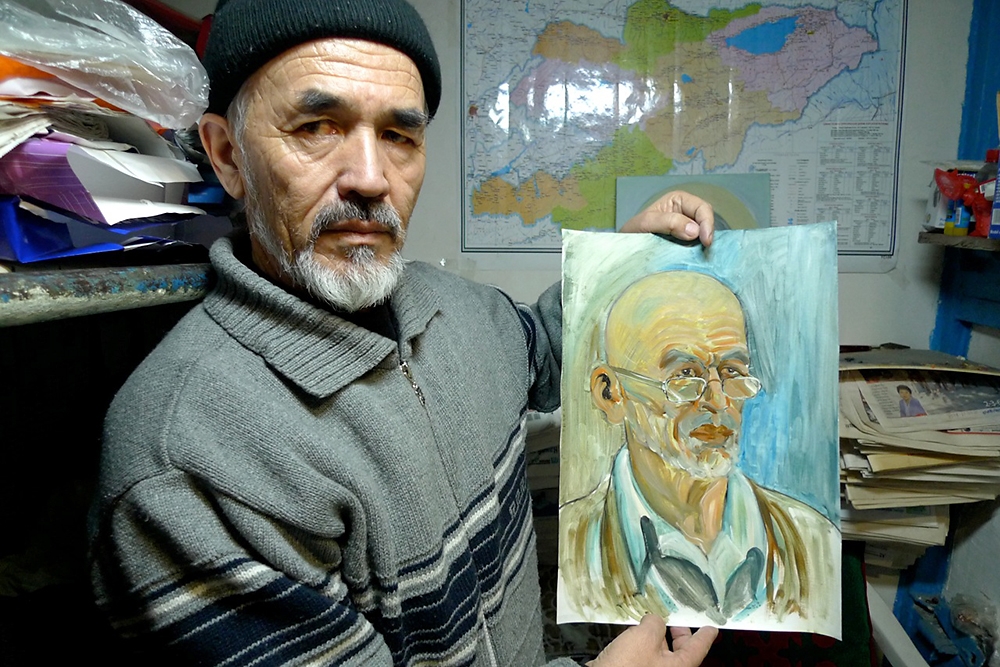 Uzbek human rights activist Azimjan Askarov, seen here holding one of his self-portraits in his prison basement cell in February 2012, is currently serving a life sentence for allegedly killing a police officer and stoking violent ethnic clashes in southern Kyrgyzstan in 2010. Kyrgyzstan’s Supreme Court opened proceedings on July 11 to review the case and possibly order a retrial. (Photo: EurasiaNet)

The highest court in Kyrgyzstan has set an unusual precedent by ruling to allow a new legal appeal for a rights activist whose imprisonment has sown dangerous ethnic, diplomatic and political tensions.

Advocacy groups have expressed dismay, however, that the ruling falls far short of what the international community and rights activists have long been demanding — Azimjan Askarov’s immediate release.

Tempers in the gallery of the Supreme Court were at boiling point from the very start of the July 12 hearing into Askarov’s case. Although the decision to order a lower court to review the life sentence passed down in 2010 opened a slight window of hope for Askarov, the ailing 65-year-old will remain in prison pending fresh legal procedures, in defiance of clear demands from the UN Human Rights Committee.

“It’s a missed opportunity for Kyrgyzstan to do the right thing by finally releasing a man who should never have been jailed in the first place. Today’s decision by the Supreme Court ignores Kyrgyzstan’s obligations under international human rights law,” Anna Neistat, senior director for research at Amnesty International, said in a statement.

Askarov, an ethnic Uzbek, was sentenced to life imprisonment in September 2010 on charges of inciting a crowd to murder police officers during deadly inter-communal riots in the southern Kyrgyzstan town of Bazar-Korgon in June that year. Askarov and his defenders have always denied the accusations and said the activist was targeted for reprisal over his history of advocacy for victims of police abuse.

Significantly, many victims of police mistreatment have historically come from the ethnic Uzbek minority, while the ranks of law enforcement bodies are dominated by ethnic Kyrgyz. This aspect has added a particularly toxic ingredient to the Askarov saga.

Around a dozen relatives and supporters of the alleged victims attended the Supreme Court hearing, at the judges’ invitation. As proceedings began, they hurled abuse at Askarov’s defense team.

Chinara Bechelova, the wife of one of the killed police officers, Myktybek Sulaimanov, spoke with rage as she was cross-questioned.

“If you acquit him, I will set myself on fire. If you don’t want another Kyrgyz-Uzbek war, leave everything as it is,” said Bechelova, whose husband was 41 years old and had served in the police force for two decades when he died.

Legal experts present at the hearing expressed misgivings that the merits of the case were even being addressed in the first place, arguing that the focus should have been on a UN Human Rights Committee statement from April that called for Askarov’s immediate release.

In its statement, the UN Human Rights Committee had cited 18 international experts as saying that Kyrgyzstan grossly flouted the International Covenant of Civil and Political Rights in its treatment of Askarov. It said the activist was denied the right to properly prepare for his trial and criticized the manner of his initial detention. Members of the committee also found that independent medical examinations suggested Askarov had been subjected to torture.

On that basis alone, Askarov should have been released, the UN Human Rights Committee argued.

State prosecutor Nurlan Tagayev said at the July 12 hearing that there was no evidence Askarov had been tortured and that the bruises on his body were sustained during an altercation with a cellmate.

As the three Supreme Court judges retired to consider their decision, relatives of the murdered police officers again tried to assault the defense team and insulted rights activist Aziza Abdirasulova, who was also present at the hearing. Several police officers intervened to prevent the physical attack.

The unruly scenes were reminiscent of the climate surrounding the original trial at the Nooken district court in 2010.

Witnesses that would have spoken in Askarov’s defense were intimidated into silence, the activist’s lawyers said at the time. On one occasion, Nurbek Toktakunov, the lawyer who has represented Askarov since the very beginning and through to the Supreme Court hearing, was attacked by relatives of the killed policeman, Sulaimanov. During the assault, the mob tore the lawyer’s shirt and stole his briefcase containing documents relating to the case. The briefcase was later recovered.

At the trial, Sulaimanov’s relatives unremittingly barracked the defendant and his lawyers, demanding that he be put to death. On one occasion, somebody hurled a glass at the cage holding Askarov. Court officials did little to reprimand the unruly crowd.

On July 12, Supreme Court judges ruled that Askarov’s appeal would only be partially recognized and said the case would have to be reviewed at the Chui regional court to further consider procedural violations.

Asiya Esenbekova, assistant professor at Kyrgyzstan’s National Law Academy, argued in comments to reporters that the court’s decision corresponded to international legal norms as previous court decisions had been cancelled and a retrial ordered.

Kirill Koroteev, a lawyer with the Moscow-based Memorial Human Rights Center, derided that interpretation of the ruling.

“[The Supreme Court’s] criminal division sent the case for a fresh appeal hearing before the Chui regional court in Bishkek. This is not equal even to a fresh trial. [It is] likely that that the appeal court won't even hear evidence anew,” Koroteev wrote on his Facebook account.

President Almazbek Atambayev, who has been in power since 2010, and his government have backed themselves into a diplomatic and political corner by vehemently insisting in public that Askarov’s original conviction was legitimate and fair.

Bishkek was drawn into a vicious spat with Washington last year after the US State Department awarded Askarov a prize acknowledging his human rights activism. The UN Human Rights Committee consolidated international misgivings over the case. And this week, German Chancellor Angela Merkel is due to visit Kyrgyzstan for talks that are likely to also touch on Askarov’s case.

That, at least, is what advocacy groups like the Committee to Protect Journalists are hoping.

“Madam Chancellor, the CPJ values your previous discussion of Askarov's case with the Kyrgyz officials, and we ask that you use all the resources available to your office, both within the German government and the OSCE chairmanship, to seek his immediate and unconditional release,” the group said in a statement.

Domestically, the threat comes from the firebrand Kyrgyz nationalists whose often-violent rhetoric has generally gone unchecked by the authorities.

“There is always a chance that nationalist groups can use this occasion to reappear and draw public attention. This is a bigger risk than any pressure from the [relatives of the alleged] victims that we saw today,” Medet Tiulegenov, a political scientist at the American University of Central Asia, told EurasiaNet.org.

That leaves Kyrgyzstan’s government perilously stranded with little way out.

“Kyrgyz authorities try to maneuver between two fires. On the one hand, there is the international community, on the other, there is a fear about once again stirring up the ethnic issue,” Tiulegenov said.