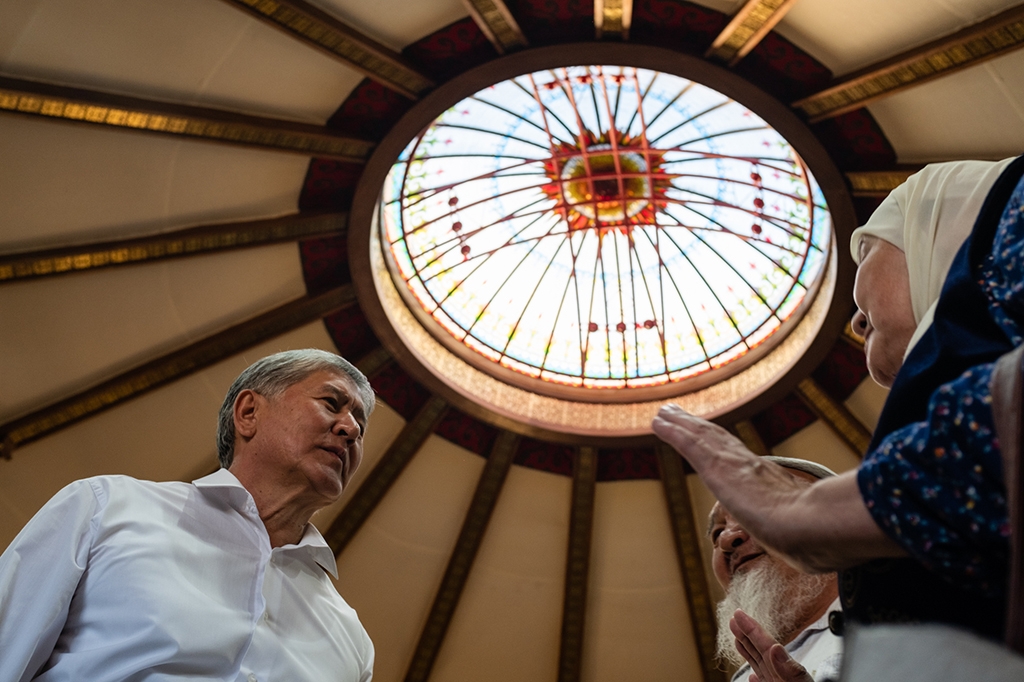 Atambayev meeting with supporters at his Koi-Tash residence in June 2019. (Photo: Danil Usmanov/Eurasianet)

Kyrgyzstan’s former president Almazbek Atambayev has been sentenced to 11 years and two months in prison for his alleged complicity in abetting the unlawful release of a convicted mobster in 2013.

Atambayev had refused to attend his own trial, dismissing the entire process as a sham.

The June 23 verdict represents the culmination of just one of the trials facing the former president, whose precipitous downfall has been caused by a rancorous falling-out with his successor and one-time protégé Sooronbai Jeenbekov.

Judge Emilbek Kaipov also ruled for the confiscation of a vast amount of assets owned by the ex-president. This included land, houses, buildings under construction, media outlets, offices, cars and around two dozen bank accounts.

Zamir Zhooshev and Sergei Slesarev, who represented Atambayev in court, described the verdict as unlawful. Zhooshev told Eurasianet in an interview that since the Supreme Court had never ruled to characterize the release of Aziz Batukayev from prison as illegal, there were no grounds for prosecuting Atambayev.

When parliament voted in June 2019 to strip Atambayev of the immunity conferred on him by his status as a former head of state, it was in part in connection with his purported role in freeing Batukayev. Champions of immunity-stripping contended that Atambayev had instructed Shamil Atakhanov, the then-head of the State Committee for National Security, or GKNB, to organize Batukayev’s release and to then meet with Russian nationals to receive recompense for the deed.

When quizzed by the Interior Ministry as part of pre-trial investigations, Atakhanov spun a remarkably elaborate tale.

According to the testimony of the former GKNB chief, which was leaked via local media, Atambayev’s intent had been to hand Batukayev over to a figure closely linked to the leader of Russia’s republic of Chechnya, Ramzan Kadyrov. The plan was supposedly to somehow secure, as part of a convoluted bargain, the return to Kyrgyzstan of the brother of another former president, Kurmanbek Bakiyev, who was deposed in 2010.

Zhanysh Bakiyev fled to Belarus together with his brother after the bloody uprising that took place in April that year and is understood to have lived there ever since. In 2013, he was sentenced to life in prison in absentia on charges of murder, torture and conspiring to form a criminal enterprise.

Quite how Kadyrov was meant, under the scheme outlined by Atakhanov, to get Zhanysh Bakiyev out of Belarus and to Kyrgyzstan is unclear.

In another passage of his Interior Ministry interrogation, Atakhanov claims that leading security officials had decided that it was in any case in the country’s best interests to remove Batukayev from Kyrgyzstan since the mobster was said to be embroiled, despite being in prison, in an escalating violent standoff with another prominent criminal underworld figure, Kamchi Kolbayev.

A doctor was thus enlisted to diagnose Batukayev with acute leukemia, which was used as a pretext for his release and subsequent relocation to Russia. Batukayev’s exact current whereabouts are not known, but it is understood that he is well and was not in fact suffering from any terminal illness.

There were three defendants in the dock alongside Atambayev – all of them denied their guilt. Indira Joldubayeva, a former General Prosecutor who worked in the presidential administration at the time of Batukayev’s release, was ordered to pay a 5 million som ($67,000) fine and was stripped of all state ranks. Kalybek Kachkinaliyev, a one-time advisor to the head of the state penitentiary service, was given a two-year prison sentence but released from custody on account of time served. And Abdukhalim Raimzhanov, the doctor accused of enabling the false diagnosis, was not sentenced because the statute of limitations on his charge had expired.

Atambayev is fighting legal actions on numerous fronts. Perhaps the most portentous will be to do with the clashes that broke out last summer, when he barricaded himself in his country residence and violently resisted a police summons to submit to questioning. Atambayev is accused, among other things, of complicity in the murder of a special forces commander killed during the failed August 7 storming of his compound in Koi-Tash, a village just outside Bishkek. That trial is ongoing.

Few are under any illusions that any of this would have come to pass if it were not for the bitter political disagreement that broke out between Atambayev and Jeenbekov.

Before ending his single permitted six-year term in 2017, Atambayev looked around for a friendly successor to anoint and the choice eventually fell on Jeenbekov, who had served loyally as a prime minister and appeared to be a malleable figure who could be manipulated from behind the scenes.

Soon after Jeenbekov was sworn into office, however, he proved to have his own mind, much to his predecessor’s chagrin. What began as a petulant battle of words escalated through the months into violence and, now, these criminal trials.