400 people turned up at the ex-president's home to hear his defiant speech. 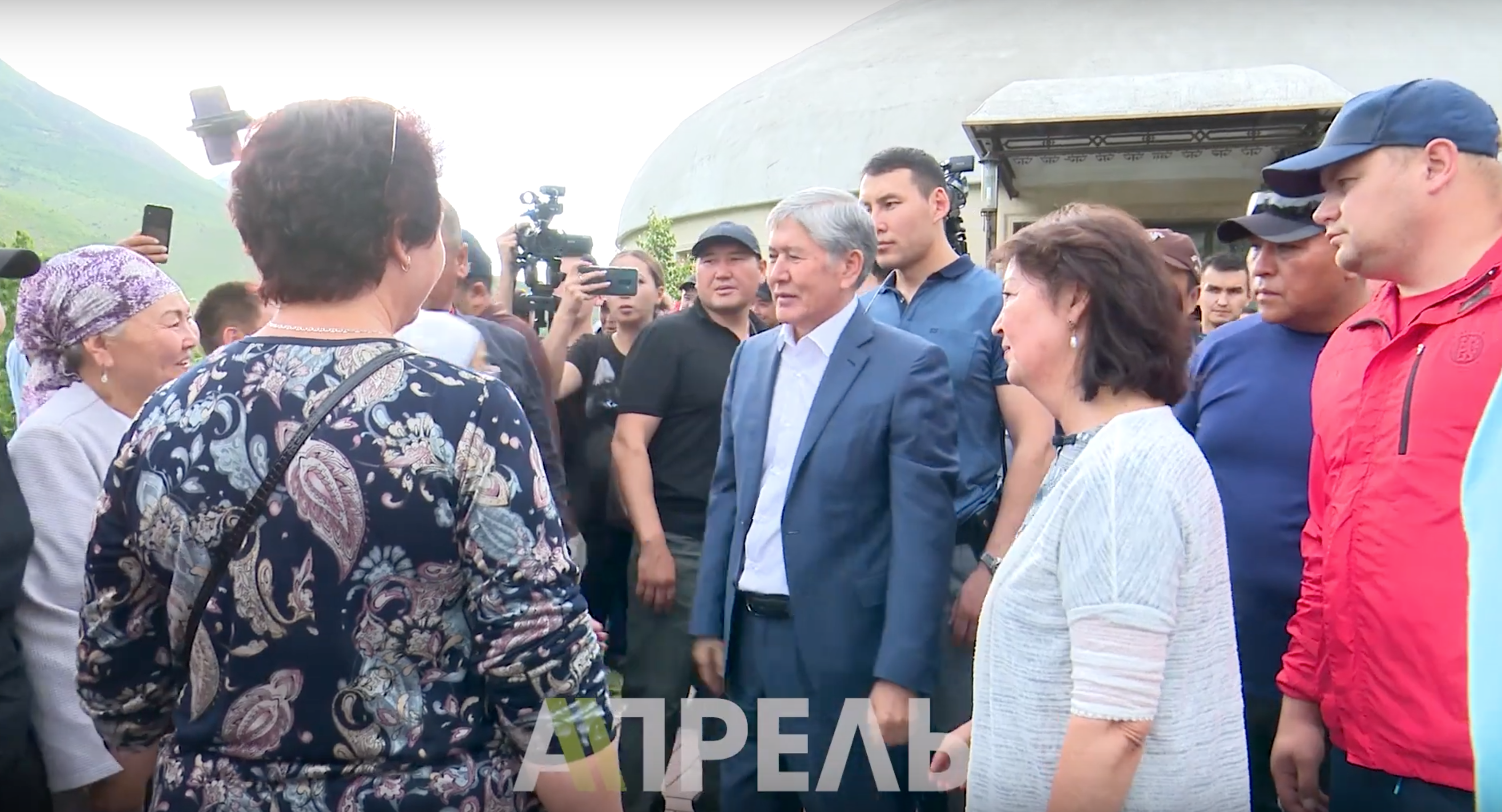 Atambayev, center, meeting his supporters at his home in Koi-Tash. (Photo: Screengrab of footage filmed by April TV station)

Now that nearly all his erstwhile political allies have abandoned him, Kyrgyzstan’s embattled former president, who is looking ever more likely to fall prey to criminal prosecution at the hands of his successor, is falling back on support in his hometown.

Almazbek Atambayev was defiant as he spoke on June 22 to a crowd of people at his residence in the village of Koi-Tash that reporters said numbered around 400.

“I am afraid of nothing. I need nobody to defend me,” he was quoted as saying by AKIpress news agency. “I was visited by guys representing 12 villages. They offered to help. I told them that I could defend myself. They told me that they would be willing to lie in front of my gates for my sake.”

A near-unanimity of the deputies in parliament, where the largest chunk of seats is held by a party that Atambayev helped create, this past week signed off on submitting a list of alleged criminal offenses committed by the ex-president to the General Prosecutor for further scrutiny. If prosecutors endorse the assessment of the lawmakers – a verdict that looks like all but a formality – it is certain that parliament will then definitively vote to revoke Atambayev’s immunity status.

The ad hoc parliamentary commission appointed earlier this month to review the option of lifting Atambayev’s immunity drew up a list of nine potential lines of criminal inquiry. That list was narrowed down when the entire legislature summoned on June 20 to approve it by 100 votes to five.

The most notable allegation is that Atambayev engaged in corrupt acts while approving the modernization of an important power plant in the capital, Bishkek. The resolution also contends that Atambayev was involved in murky deals connected with the supply of coal to the power station and the acquisition of land on the outskirts of Bishkek, where he has built a house. Another allegation is that he illegally ordered the release of a notorious crime boss in 2013.

Atambayev described the accusations coming out of parliament as “completely absurd.”

In a parallel but apparently related decision, a Bishkek court on June 19 ruled to permit the seizure of 10 years’ worth documentation related to the bank accounts of Atambayev and many of his close relatives.

The government is making little effort to disguise the fact that the hounding of Atambayev is just the culmination of a bitter falling-out between him and current President Sooronbai Jeenbekov. The two men were once allies, but Jeenbekov has bristled at Atambayev’s apparent expectation that he would be allowed to keep a hand in running the country out of retirement.

Despite sustaining one defeat after another in this standoff, Atambayev has proven remarkably recalcitrant and unwilling to back down, even as the authorities have flung several of his prominent allies behind bars. The most high-profile casualty to date is former Prime Minister Sapar Isakov, who is facing corruption charges related to the Bishkek power plant refurbishment.

The norm in Kyrgyzstan has typically been for politicians facing imminent arrest – and it is hard to see how Atambayev can avoid that fate as things stand – to consider flight. With his speech to his ultra-loyalists, however, the ex-president appears intent on exorcising the specter of a return to the kind of bare knuckles street politics that was a trademark of Kyrgyz power struggles in years past.

At least one media outlet covering the meeting at Koi-Tash, which is a short drive from Bishkek, made a point of noting that those present turned up of their own initiative.

But while Atambayev professed surprise at the volume of the turnout, the reality is the amount of supporters he can rally still looks meager. His chances of mounting a successful resistance will be remote unless he manages to rally support from other major political players or even his one-time allies in the Kremlin.