Kyrgyzstan: Atambayev takes fight back to the capital

His supporters have given the government a two-month deadline to step down. 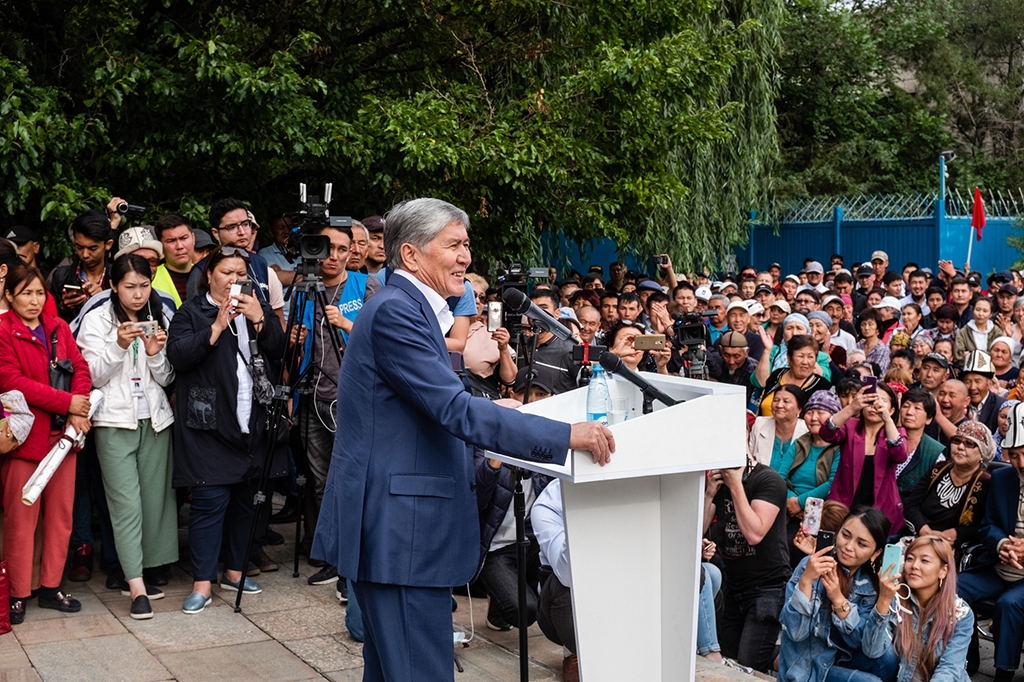 Atambayev addresses the crowd. (All photos by Danil Usmanov)

Almazbek Atambayev, the former president of Kyrgyzstan whose fate lies in the balance following parliament’s decision to strike down his immunity status, has mounted a high-stakes challenge to the government with a protest rally in the capital.

Around 1,000 people attended the July 3 demonstration, which took place outside a building in eastern Bishkek known as Forum that has historically served as Atambayev headquarters. Most of those in attendance were older woman and young men. 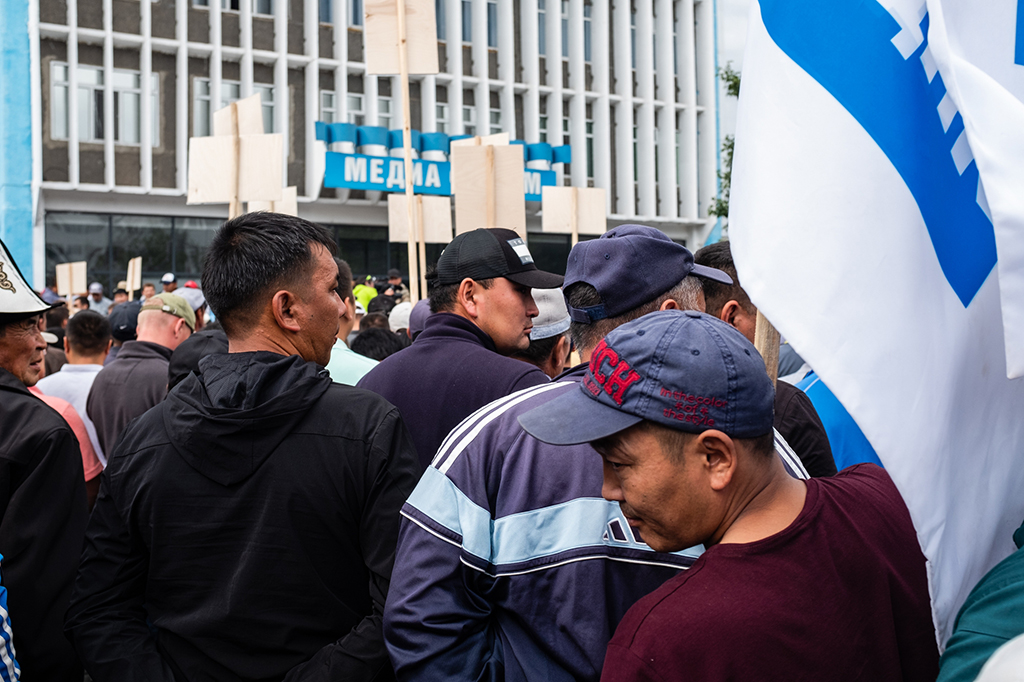 The meeting began at 4 p.m. and wrapped up with a resolution calling for President Sooronbai Jeenbekov to dissolve parliament and dismiss the government within the coming two months.

Parliament voted last month to strip Atambayev of immunity from prosecution after determining in near-unanimity that he might have committed numerous acts of corruption and abuses of office during his single permitted six-year term, which ended just over 19 months ago. His attendance at the Bishkek rally left Atambayev open to the prospect of arrest, but the authorities appear to have thought better of this potentially provocative move.

Atambayev’s standoff with Jeenbekov stems from a disagreement over power-sharing. The former head of state appeared to believe he would still be allowed a key decision-making role even after leaving office. Jeenbekov was of a different view.

Now that he has fallen out with the ruling elite, Atambayev, 62, has decided he believes that Kyrgyzstan is in urgent need of new blood at the top.

Participants at the Forum demonstration held up signs reading: “This is not the Soke we expected,” a reference to the affectionate diminutive form of Jeenbekov’s first name that was once particularly favored by Atambayev, “Old elite, it’s time to leave” and “Soke, take a hike.” 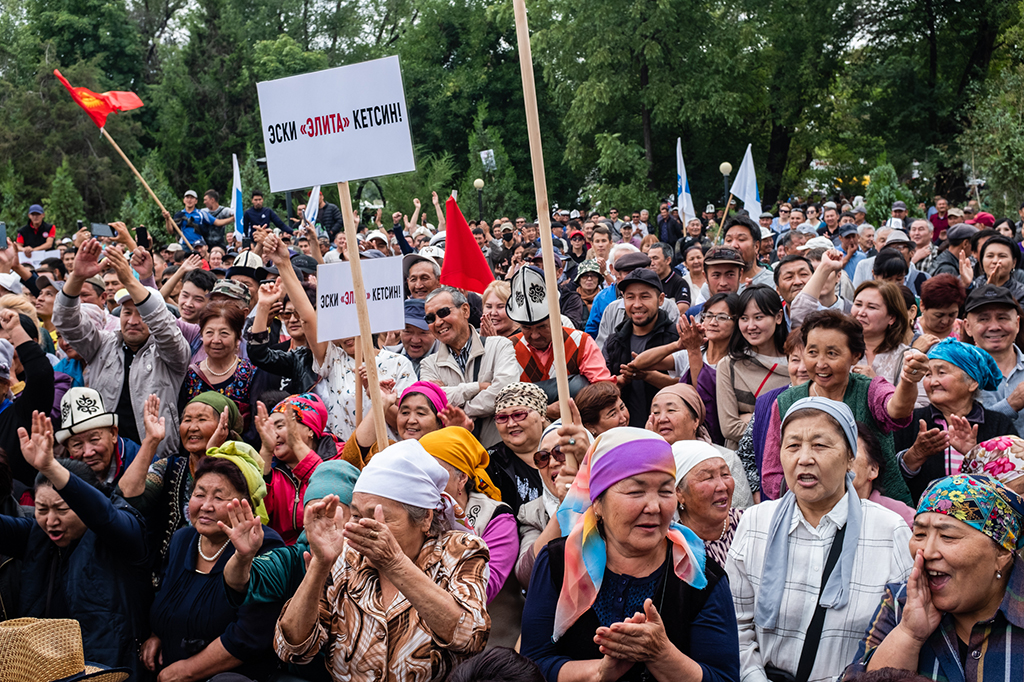 Atambayev arrived at the Forum around half an hour into the start of proceedings and took up a seat in the front row before an improvised stage. Beside him sat some of the very few lawmakers that have remained loyal to him – Irina Karamushkina, Anvar Artykov and Asel Koduranova.

Before the ex-president addressed the crowd, a number of supporters, community leaders and prominent figures in the Atambayev-founded Social Democratic Party, or SDPK, delivered some remarks. Some speeches were intense in emotion and high on hyperbole. 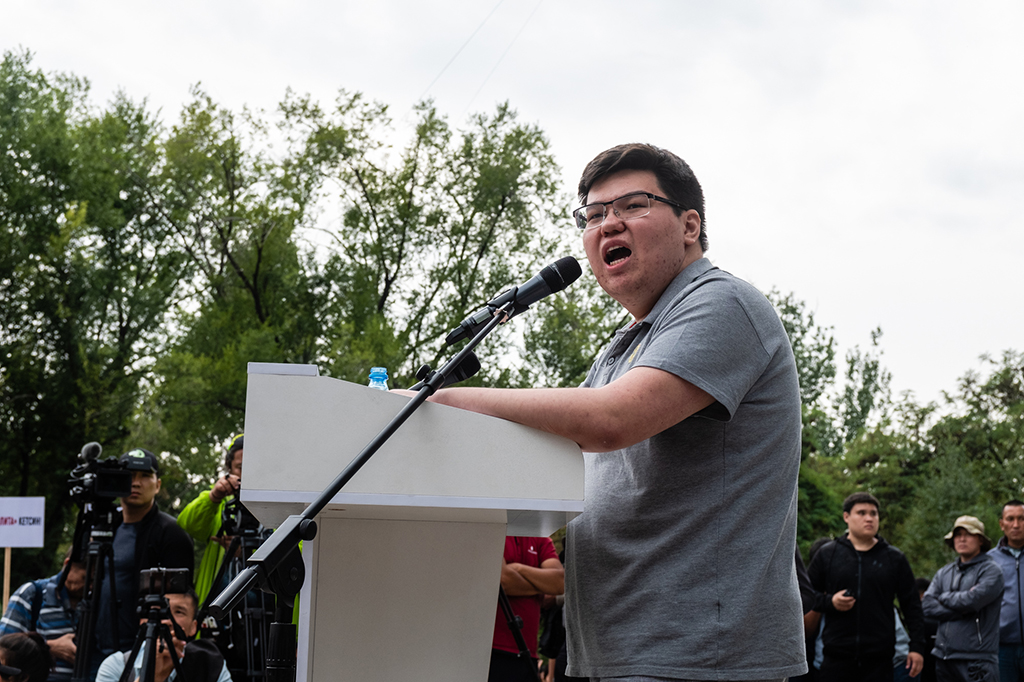 “In these past 3,000 years, Atambayev was the first to build a road from north to south. It used to take 24 hours to get from Naryn to Jalal-Abad. Now it takes six hours,” said Temirlan Sultanbekov, a youthful member of the SDPK. “And now parliament has declared Atambayev an enemy of the people for building this road.”

Another speaker, Ravshan Jeenbekov (no relation), joked that it was the fate of the SDPK to always be in opposition to those in power.

“A year has passed since the SDPK became an opposition party, but we were the opposition for 25 years,” he said.

This is a slightly fanciful accounting of history, and of the present, as it happens. While Atambayev was president, from 2011 to 2017, SDPK acted in effect as the ruling party. And now, the party is experiencing a confusing dual existence. Many nominally SDPK deputies in parliament voted in favor of lifting Atambayev’s immunity, transparently at the behest of the presidential administration. That wing of the party dubs itself SDPK Without Atambayev. The rest of the party, which still controls the official Sdpk.kg website, is the one that is sticking by its historic leader.

Ravshan Jeenbekov said Kyrgyzstan is at a tricky impasse and that dialogue was of the utmost importance to ensure a pacific outcome to events.

“Atambayev has become the opposition. I ask you not to break him. Kyrgyzstan needs a strong opposition. And so, I once again say that if the authorities wish tomorrow to arrest the opposition, to smash its strength, we must all brace ourselves to defend Atambayev,” he said.

“There is no road back,” she said. “We will begin protest actions.” 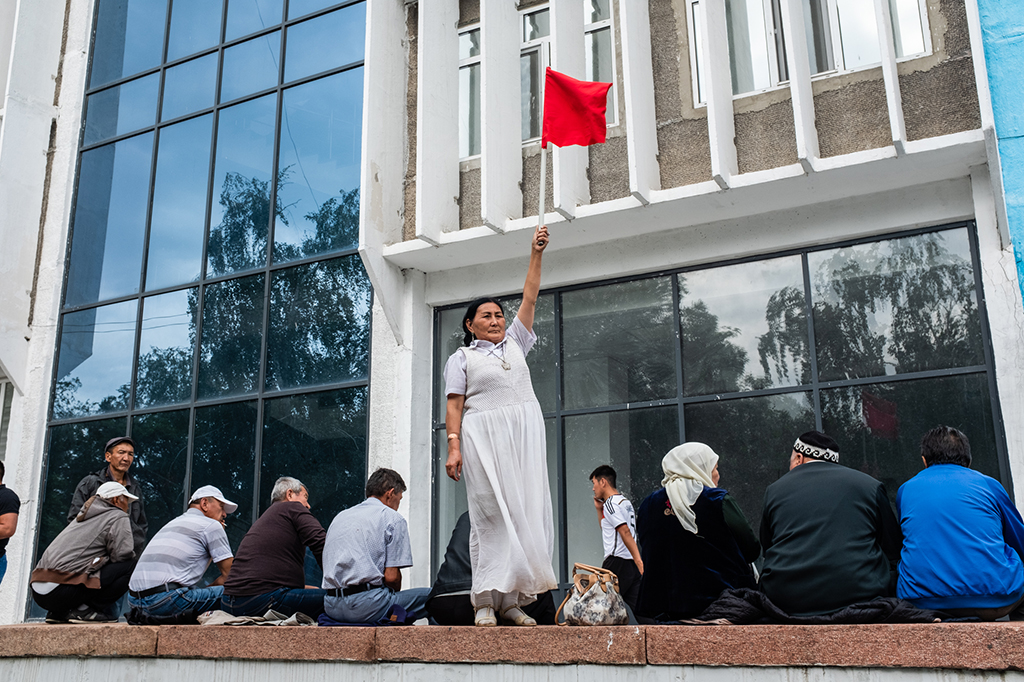 Atambayev was the last to speak. His delivery was low-key as his throat hurt, making it difficult for him to project his voice. On several occasions, listeners had to ask him to move closer to the microphone.

His primary demands were for the government to release maybe his most important ally, former Prime Minister Sapar Isakov, and to make way for a new generation of political leaders.

“I don’t need power. Let them lift my immunity. I have the people and God with me. I am afraid of nothing,” he said. “I would like to say to Sooronbai Jeenbekov that playing with fire can end badly. Think hard and clear out your entourage.”

With the speech done, Atambayev’s team declared that they were giving the government a two-month deadline for the president, the prime minister and parliament to stand down. Otherwise, they warned, major demonstrations would take place.

As a patriotic song blared over the square, Atambayev left the rally and his crowd of supporters melted away shortly after that.