The former president has refused to turn up for hearings. 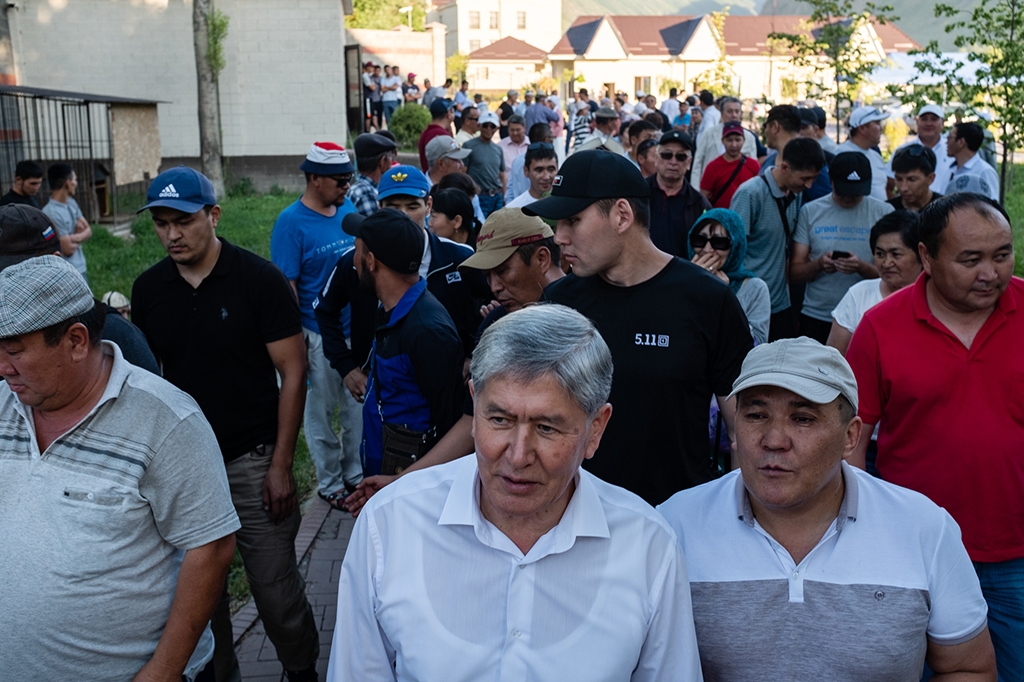 Atambayev, center, with his supporters at this country residence in June. (Photo: Danil Usmanov)

A court in Kyrgyzstan is trying the country’s former head of state. But the defendant, Almazbek Atambayev, is not playing ball.

On October 14, Bishkek’s Pervomaisk district court held the second hearing of a trial that is considering whether Atambayev broke the law while he was in power by authorizing the release of an imprisoned crime boss.

For the second time in four days, however, the ex-president elected not to turn up, remaining instead in his jail cell.

Speaking outside the court after the first no-show, Atambayev’s lawyer Sergey Slesarev said that his client “did not want to participate in a show.” Slesarev said Atambayev has refused to cooperate with investigators in other ongoing investigations against him.

When security forces were sent to try and detain Atambayev at his country home in August, it was because he had refused multiple police summons to undergo questioning in relation to the 2013 release of mobster Aziz Batukayev. The attempt to detain Atambayev culminated in bloody clashes that claimed the life of one special forces soldier.

Batukayev was released from prison on medical grounds after it was found that he was purportedly suffering from a terminal illness. Upon gaining his freedom, he left the country and relocated to the Russian republic of Chechnya. It was later discovered that the documents attesting to Batukayev’s terminal diagnosis were in fact forgeries.

If Atambayev and the three other officials in the dock are found guilty of involvement in this fraud, they could face prison terms of up to 15 years.

But the Batukayev case is only the start of Atambayev’s headaches. If he was in trouble before, the violent resistance of detention in August is going to prove his primary source of legal complications.

Slesarev said that Atambayev has been informed he is suspected of committing over a dozen crimes, including organizing murder and mass disturbances.

Of the three other former officials who have been formally accused of corruption in the release of Batukayev, one is a former state prosecutor, Indira Joldubayeva.

Joldubayeva was in charge of judicial reform at the time Batukayev’s release. She emerged tight-lipped from the October 11 hearing.

Her predecessor, Aida Salyanova, is only one of 15 suspects in the case, despite holding the prosecutorial office at the time of Batukayev’s release.

Joldubayeva, like Atambayev and the other two officials, refused to cooperate with the investigation, whereas Salyanova gave evidence against Atambayev.

Ex-deputy prime minister Shamil Atakhanov, who was thrown in jail during the pre-trial investigation and is said to suffer from a medical condition, has since been transferred to house arrest.

He also seems to have escaped prosecution after testifying against his former boss.

Selasarev has suggested that these former officials not currently in the dock may get away with fines or escape punishment completely.

In this case, the public will likely perceive the trial as a witch-hunt.

But given how far Atambayev’s stock has fallen since the end of his scandal-filled six-year term, it seems likely many will not care.