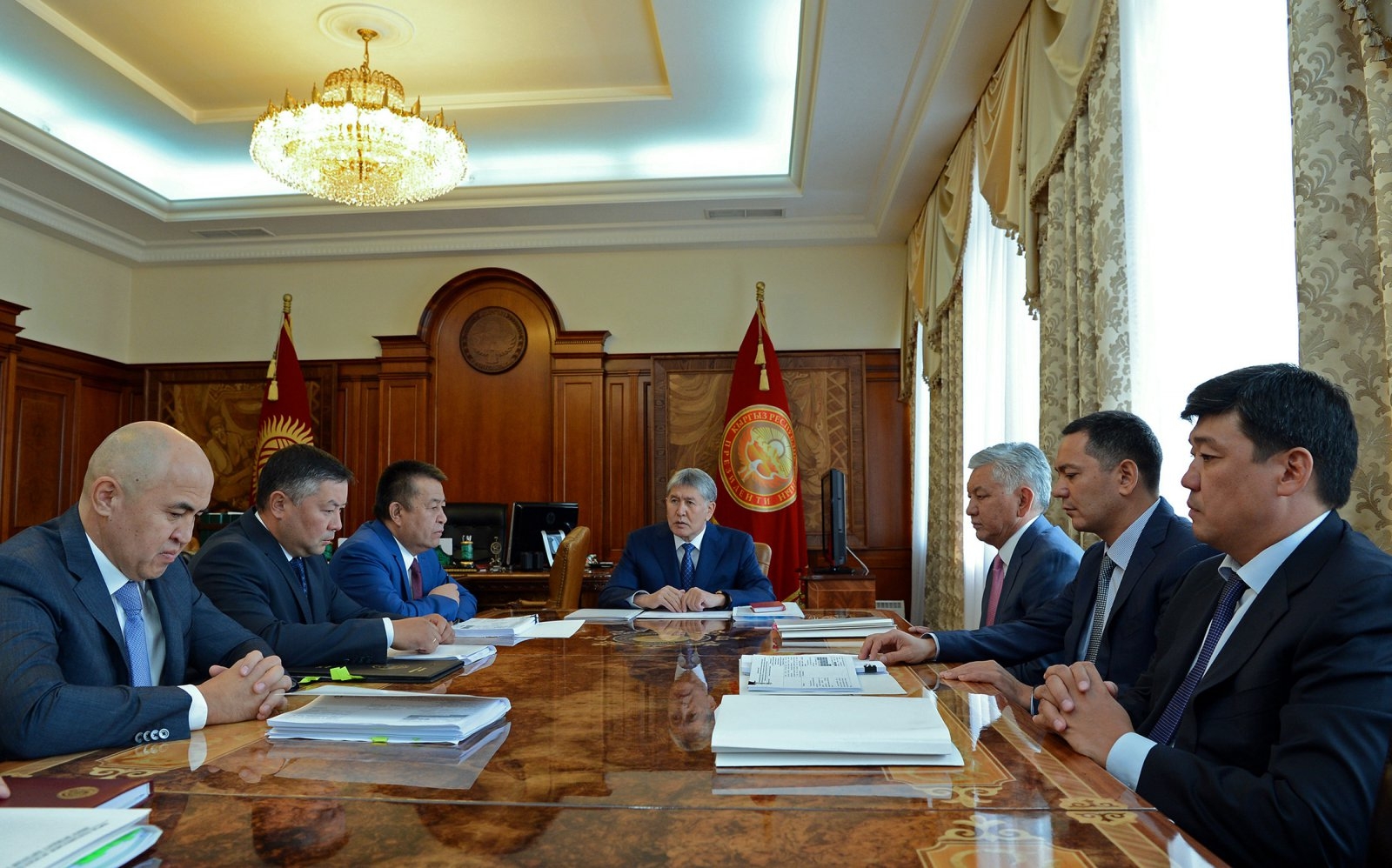 Kyrgyzstan’s President Almazbek Atambayev meets with the speaker of the Kyrgyz parliament and the heads of five parliamentary factions on August 29 to discuss amendments to the nation’s constitution. The suggested amendments caused a row between Atambayev and his fellow members of the interim government that he led in 2010. (Photo: Kyrgyz Presidential Press Service)

President Almazbek Atambayev is raising the stakes in his souring confrontation with former allies by calling on the Prosecutor General to investigate fellow members of the interim government that he led in 2010.

One of those erstwhile partners has fired back with accusations of corruption and a stark threat to state broadcasters, who he has suggested are orchestrating a smear campaign against Atambayev’s critics.

The ugly row is connected to plans to hold a constitutional referendum on December 4. Civil society groups have expressed concern that the vote is designed to bolster the current ruling elite’s grip on power. One widely circulating theory is that members of the entourage around Atambayev, who is limited by law to a single term that ends next year, are looking to shore up their positions ahead of the end of the president’s term.

While the political tension had been brewing for weeks, it bubbled to the surface in a dramatic fashion on September 15. Atambayev instructed the country’s top prosecutor to look into whether any of the members of the caretaker cabinet installed after the 2010 ouster of President Kurmanbek Bakiyev were involved in abetting the flight of prominent ethnic Uzbek businessman Kadyrzhan Batyrov, who was accused of inciting inter-communal unrest that same year.

“I understand that there will be fierce resistance from those who do not want the disclosure of all the circumstances. But citizens should know the truth, whatever that might have been,” Atambayev said in a statement.

At the time of the alleged 2010 incidents in question, Atambayev led the interim government, so his insinuations have raised some eyebrows. He later won a presidential election and began his term in December 2011.

The circumstances of the 2010 ethnic unrest in the cities of Osh and Jalal-Abad, during which more than 400 people died, remain a deeply contentious issue in Kyrgyzstan. Authorities insist that the violence was initiated by the Uzbek minority in a bid to secure some kind of territorial autonomy for their community. Uzbeks, who suffered the vast majority of casualties, say they were victims of pogroms intended to displace them and dispossess them of their businesses. In the wake of the unrest, the almost entirely ethnic Kyrgyz-staffed police almost exclusively singled out Uzbeks for arrest and harassment.

Given the lingering hostilities, the suggestion that any prominent Kyrgyz politician would have somehow assisted a figure like Batyrov — who was in 2014 found guilty in absentia of plotting unrest, fomenting separatist activities and inciting ethnic hatred — is highly charged.

Even openly pro-Atambayev commentators like Marat Kazakpayev admit that bringing up Batyrov at this stage is likely politically motivated.

Another line of attack against Atambayev’s opponents has come in the form of television hatchet jobs alleging that members of the 2010 interim government were involved in marauding and the appropriation of property amid the turmoil that followed Bakiyev’s ouster.

Such allegations were aired again in parliament on September 15 by a deputy from Atambayev’s Social Democratic Party (SDPK), Meerbek Miskenbayev. The MP heavily implied in a speech that the theft and looting that occurred on and after April 7, 2010, was in part the handiwork of Omurbek Tekebayev, the leader of the left-leaning Ata-Meken party.

Tekebayev served as deputy head of the interim government from April to July 2010. He spearheaded the constitutional reforms that Atambayev is now trying to revise.

Later on September 15, Tekebayev fired back at his detractors. During a news conference, he alleged that Atambayev had illegally acquired a plot on which he is now building himself a huge house. Even more explosively, Tekebayev leveled a chilling, barely veiled threat at the general director of KTRK state broadcaster, Ilim Karypbekov, whom he accused of unfair coverage.

“Be objective when covering this or that detail. You walked alongside Bakiyev and got away with it. Now you are with Atambayev, and if you do not work objectively, you will not remain alive,” Tekebayev said, addressing Karypbekov.

The most immediate implication of this public bust-up is a possible collapse of the ruling five-party coalition, of which Ata-Meken is a part. The pro-agrarian Onuguu-Progress has also made noises about wanting to ditch the coalition.

The three remaining coalition partners — SDPK, Bir Bol and the Kyrgyzstan party — would still have enough seats to make up a majority, albeit a much weaker one. Speaking on September 16, SDPK parliamentary faction leader Isa Omurkulov said he could not see the coalition breaking, but that it would not be a disaster if it did.

“If it happens, the approach to forming a new alliance will be utterly principled,” he told journalists. “The interests of the state should be higher than those of factions or single MPs.”

Resurrecting the events of 2010 has become a favored way for Atambayev to strike out at his critics. In his Independence Day speech on August 31, he caused a flap by directly criticizing Roza Otunbayeva, who served as interim president after Bakiyev’s overthrow.

The harshness of Atambayev’s language appeared to have been caused by a statement released a day earlier by several members of the 2010 interim government criticizing plans to fiddle with the constitution.

“If you have already forgotten Roza Isakovna [Otunbayeva], then we well remember, what chaos there was after the adoption of the new constitution,” Atambayev said. “Our country was in turmoil for four years because of all the mines laid in the constitution.”

Those views contrasted sharply with Atambayev’s regular prior praise for the Tekebayev-engineered constitution, which was intended to transform Kyrgyzstan’s political system from a presidential to parliamentary republic.

Unable to suppress her indignation at the president’s speech, Otunbayeva stormed off the stage she was sharing with the president.

Atambayev has been pushing away his former allies with consistent resolve. “In the last few years, the president has with the help of many actors and groups of political figures created a system in which he has become the dominant person,” Medet Tiulegenov, a political scientist at the American University of Central Asia, told EurasiaNet.org.

In limbo for a generation: Photos of Azerbaijan’s displaced