Earlier this months, hundreds gathered in Bishkek to protest developments in Xinjiang. 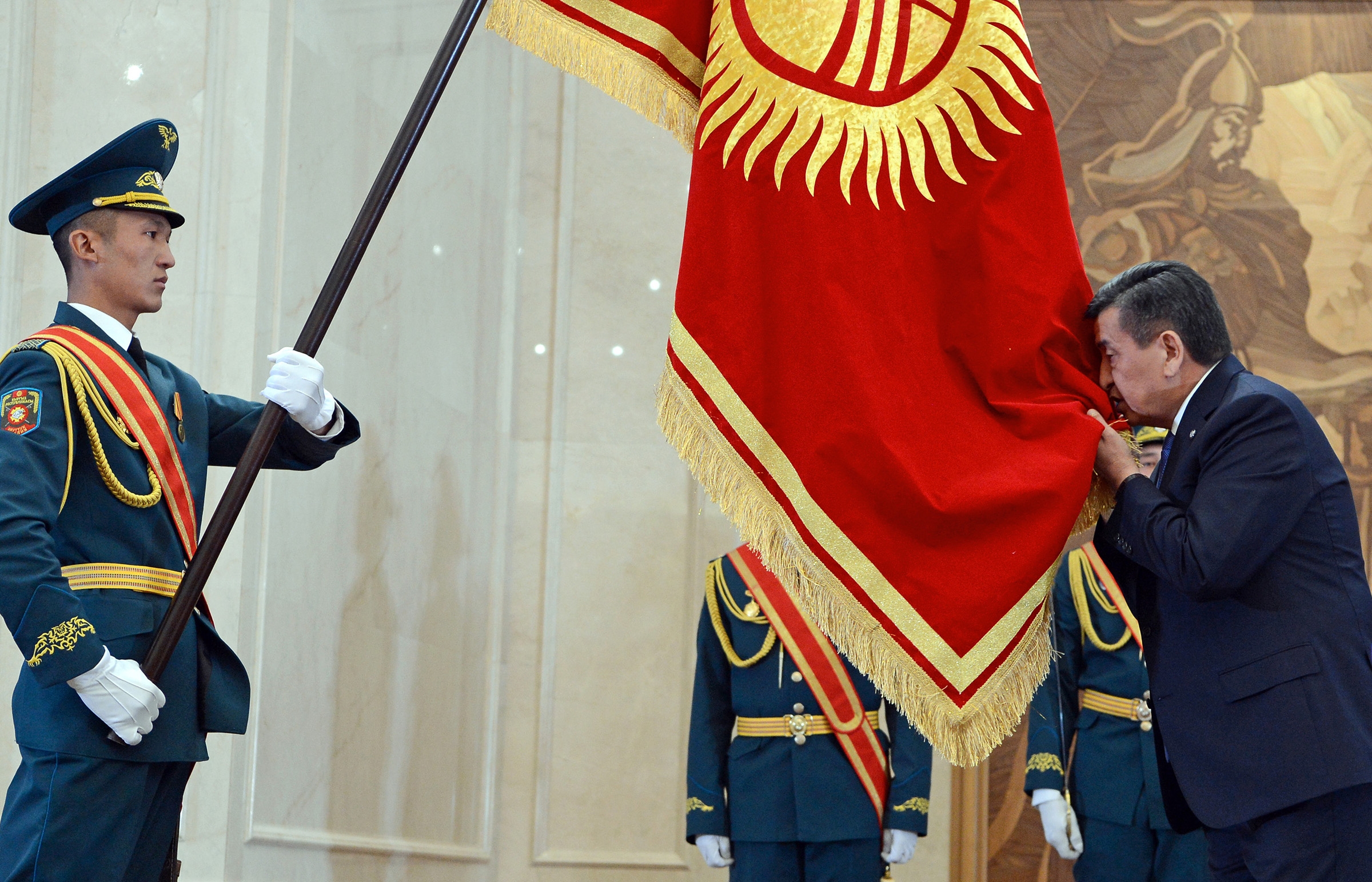 President Sooronbai Jeenbekov wants to be seen as a Kyrgyz patriot, but not at the cost of alienating China. (Photo: Kyrgyz presidential website)

If China ever needs a public-relations boost, Central Asian officialdom is only too happy to oblige.

Days after an anti-China rally brought around 300 young men onto Bishkek’s central square, President Sooronbai Jeenbekov and a top member of the Cabinet were on the defensive. Speaking at a meeting with residents of the northern Chui province on January 9, Jeenbekov said Kyrgyzstan should be grateful to have an economically willing neighbor like China. He also promised to “take measures” against pot-stirrers looking to damage Kyrgyzstan's relationship with China or cause trouble in general.

Some day earlier, on January 7, demonstrators gathered in a call for the government to send undocumented Chinese migrants packing and prevent Chinese nationals from achieving Kyrgyz citizenship through marriage. The crowd of young men also complained about the treatment of ethnic Kyrgyz in China’s Xinjiang – some of whom have seemingly ended up in the region’s notorious re-education camps – echoing the concerns of a smaller group that rallied outside the Chinese Embassy last month.

This demonstration was sufficiently unruly to give authorities cause for concern, especially since participants have pledged to reconvene on January 17.

Such events always carry the risk of snowballing in Central Asia’s most politically combustible country. Ominously, members of Kyrk Choro, a thuggish vigilante group claiming a connection back to the 2010 revolution, were among the assembled.

Jeenbekov is not the only decision-maker voicing concerns about a spike in anti-China sentiment.

First Deputy Prime Minister Kubatbek Boronov on January 9 complained of misinformation surrounding China’s presence in the country, including a stubbornly persistent rumor that Kyrgyzstan might have to cede land if unable to pay its debts to Beijing.

Boronov praised China as a “reliable partner and kind neighbor” and reeled off a list of social infrastructure projects built with Chinese grants.

In a pointed reference to protesters' complaints over migration, he noted that 35,215 Chinese nationals entered Kyrgyzstan in 2018, down from 41,307 the year before.

In both years, almost exactly the same number of Chinese nationals left the country, he said. Citizens should steer clear of any online anti-China provocations and calls for violence, he advised.

But if policymakers here and in other Central Asian countries tend to use their heads when it comes to China, Beijing has long faced an uphill struggle winning hearts.

In Kyrgyzstan’s neighbor, Kazakhstan, fears over Chinese expansionism were useful grist for the mill in protests in 2016 sparked by planned land reforms.

With a legacy of two revolutions since the millennium and its substantially weaker security state, Kyrgyzstan’s government would have trouble withstanding a similar uproar.

The crackdown in Xinjiang, which has deeply affected ethnic groups with family ties to Central Asia, has served to deepen local skepticism about China’s goodwill towards the region.

Kyrgyzstan’s Foreign Ministry confirmed on January 9 that its diplomats were part of a Xinjiang tour party led by Chinese officials and involving representations from 11 other countries including Kazakhstan, Tajikistan and Uzbekistan.

A ministry press release referred to “vocational education and training centers” in which diplomats “held joint conversations with students of the above institutions and got acquainted with the conditions of their stay.” That is apparently a generous description of the internment camps that have made headlines around the world.

Even for China’s allies, putting a positive spin on Xinjiang is a tough ask.

Yet Kyrgyzstan’s government may inadvertently have damaged China’s brand in the country itself thanks to the time-honored national tradition of political infighting.

Beijing has doubtless been watching with some concern an ongoing criminal investigation into the collapse of a thermal heating plant in Bishkek, which was refurbished by a Chinese contractor to the tune of nearly $400 million in state-issued Chinese loans.

The most immediate high-profile target of the graft investigation is ex-Prime Minister Sapar Isakov, a noted rival of Jeenbekov's.

Yet it is the Chinese contractor that prosecutors will tie to Isakov in order to prove his guilt in court. Assuming they are successful, he may get 20 years in jail.

Glowing official assessments of Beijing are all well and good, but a case like this one sends a different kind of message to the street.