Kyrgyzstan: Authorities Present Their Case for Claimed IS Cell 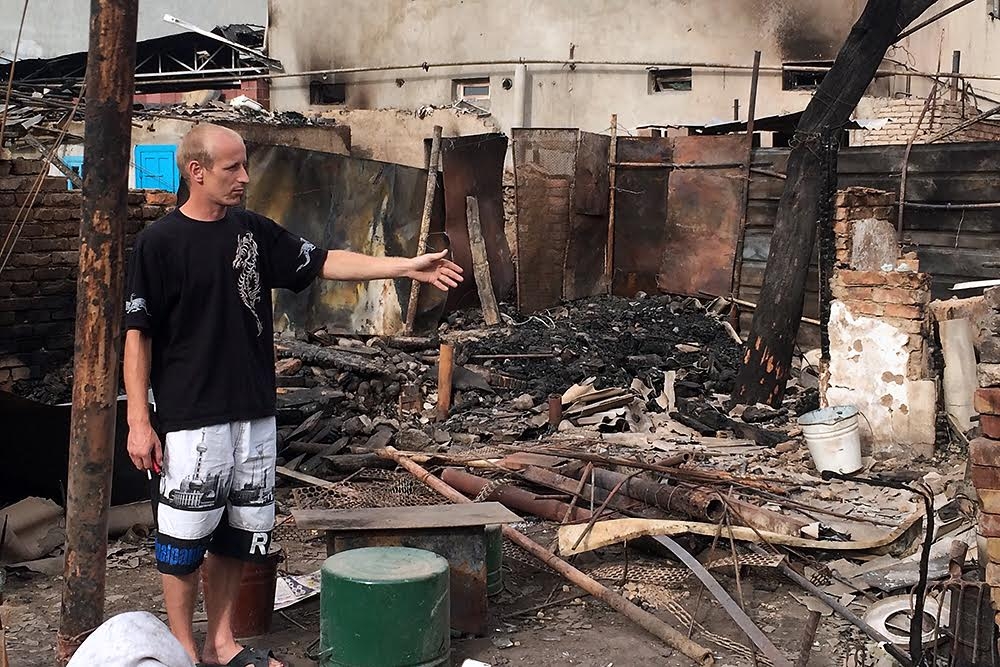 When a special forces unit began storming alleged terrorists holed up in a dwelling near the center of the Kyrgyz capital Bishkek one recent afternoon, Ivan Zaryayev thought it was children setting off fireworks.

“I thought to myself, what on earth are they doing playing with petards at this time of day,” Zaryayev, 29, told EurasiaNet.org. “And then the children came running in and said shooting had broken out.”

Hours later, Zaryayev’s house, as well as that of a neighbor, was a smoldering ruin. The imposing adjacent rented accommodation, where the gunmen were living, is now a burned-out shell riddled with bullet holes.

Authorities in Kyrgyzstan are hailing their July 16 operation as a timely, preemptive blow against Islamic terrorism. In the ensuing days, President Almazbek Atambayev ordered the head of the State Committee for National Security to hand out awards to the troops involved.

Yet with every statement the authorities issue, questions seem to mount about what exactly happened in Bishkek on July 16. According to the official account, security forces killed four militants during the raid on the radicals’ dwelling on Temirova Street, two other militants died in a parallel operation outside the city and another seven individuals were arrested. Security services assert the men, a mix of Kyrgyz and Kazakh citizens, are members of an Islamic State cell that had been planning terrorist attacks in the capital and against the Russian air force base in the town of Kant.

The leader of the cell has been identified as a citizen of Kazakhstan, Zhanbolat Amirov. (To compound the confusion, Amirov has been identified alternatively as Ashirov and Amanov in various local media reports. News website 24.kg cited unnamed security sources as saying he was killed in the July 16 raid).

Beyond the purported finding of the distinctive black IS standard at the Temirova building, authorities have been vague when it comes to producing evidence linking members of the armed gang involved in the July 16 raids to the international terrorist organization.

Authorities in Kazakhstan and Kyrgyzstan alike have said Amirov crossed into Kyrgyzstan illegally last year, along with countryman Albert Abkhin, with a view to traveling onward to Syria. The pair were promptly arrested, but escaped from prison in April. They then reportedly set about plotting their attacks, although Abkhin blew himself up with a grenade when cornered by police on the night of June 30.

The relatively brief timeframe for all these events has engendered skepticism among political observers in Central Asia about how the alleged terrorist group could have devised the elaborate plans attributed to them by Kyrgyz authorities.

The investigation took an unexpected turn on July 20, when security officials announced the arrest of a former member of parliament who served as a deputy in former President Kurmanbek Bakiyev’s Ak Zhol party. Figures close to Bakiyev – whose regime collapsed amid a popular uprising in 2010 and who now lives in self-imposed exile in Belarus – are periodically accused by incumbent authorities of plotting to destabilize the country.

The State Committee for National Security said in a statement that the man, who they identified only by the initials K.M.K, provided the suspected Islamic State cell with weapons, including Kalashnikov automatic rifles. K.M.K is accused of colluding with the known leader of an organized crime group, Tariel Djumagulov.

“Operating under K.M.K’s planning and guidance, T. Djumagulov’s armed gang intended to rob financial institutions and individuals in order to secure funds to finance terrorist activities and the destabilization of the situation in the country,” the statement said.

Djumagulov is a long-time fixture on Kyrgyz-police most-wanted lists. He was detained on suspicion of racketeering in 2007 and later served time in prison for robbery. The Interior Ministry’s organized crime division has described him as a member of notorious crime boss Kamchibek Kolbayev’s group. How and when figures like Djumagulov are thought to have embraced radical Islamic activity is unknown.

The declared haul of seized weapons at Temirova suggested that the group was far from suitably equipped to stage a major terror operation. The arms discovered at the dwelling comprised six Kalashnikov automatic rifles, an AKS-74U short assault rifle, five handguns, a large quantity of grenades and ammunition, and 500 kilograms of ammonium nitrate for use in the production of explosive devices, according to the security services.

All the same, the special forces unit that carried out the anti-terror operation on July 16 took no chances. Zaryayev, who was hiding out at a neighbor’s house as the three-hour shootout played out, said he could hear the sounds of automatic rifle and pistol fire, as well as a grenade launcher. Such was the intensity of the firepower being used that fires broke out within an hour. Eventually the flames spread across the neighborhood, destroying four houses and leaving six families homeless.

The attack came from all sides, and civilians in the area were not given advance notice. Police neglected to cordon off the area so at least an hour after the start of the raid residents themselves had to turn back unsuspecting motorists intent on passing through the area.

Islamic State terrorists that are so badly resourced that they have to resort to robbery may force an adjustment to a narrative implicitly supported by the government.

In an analytical piece in the Kabar state news agency published in February, Mirlan Alymbekov lamented that the government’s long-standing principle of non-interference in religious affairs had led to a proliferation of extremist beliefs and practices. That trend was compounded by outside parties, Alymbekov said. He backed that argument by citing a claim by the director of the Bishkek-based Religion, Law and Politics think tank, Kadyr Malikov, that the Islamic State group had allocated $70 million toward destabilizing Central Asia.

Almost a week after the unrest in Bishkek, no suspects in custody have appeared during open court proceedings and the security services have been stingy with releasing their information. Investigations into alleged terrorism are conducted with utmost secrecy all across Central Asia, making it virtually impossible to assess independently the accuracy of official statements.

Commenting on his Facebook account, prominent Kyrgyz free-market activist Mirsuljan Namazaliev urged more openness over this case as a way of reassuring the public.

“Everybody has the right to doubt or think differently – somebody may think that these were not terrorists, some might that we should believe the (State Committee for National Security),” Namazaliev wrote. “We have to get more information, so that we can independently draw our own conclusions.”