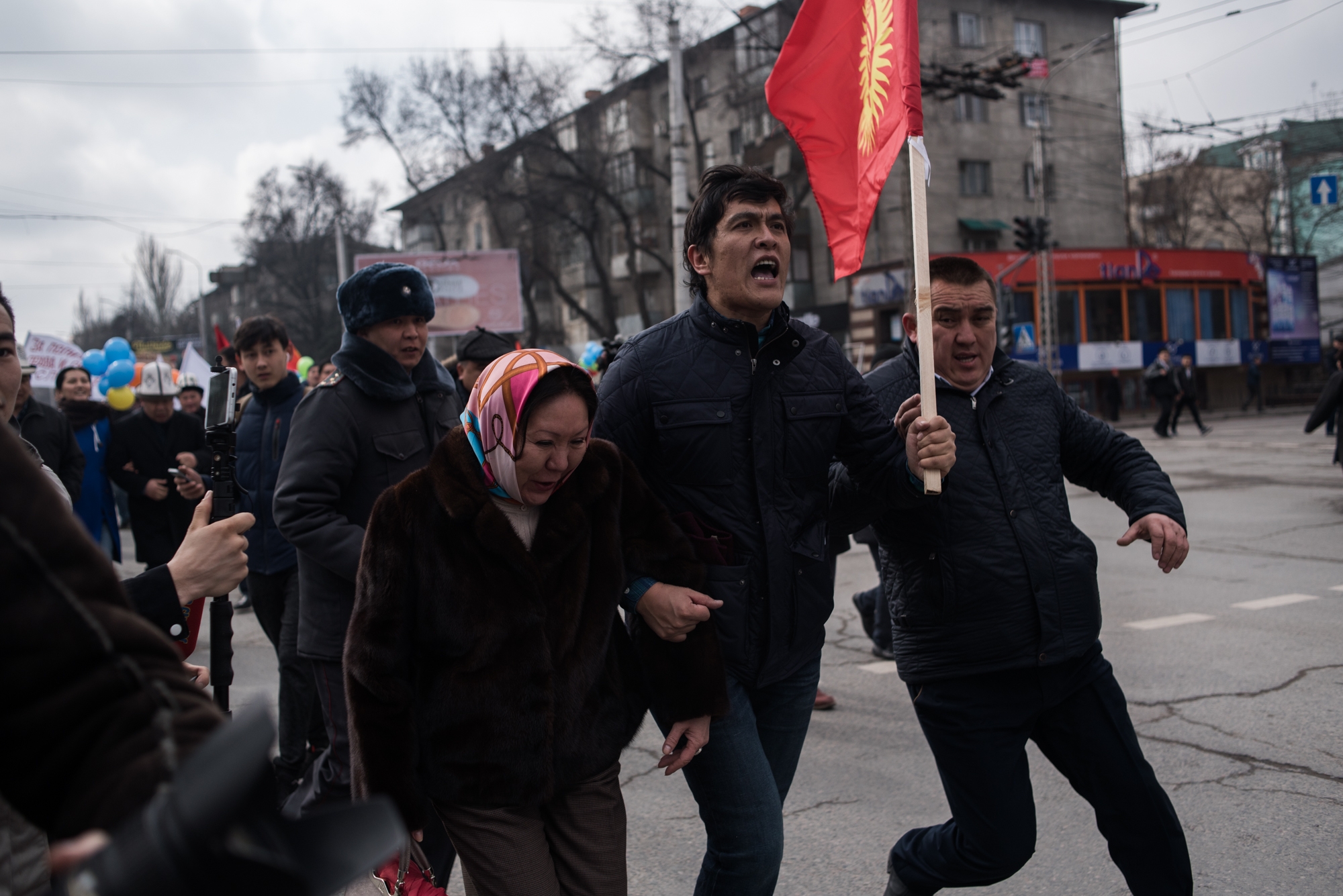 Public activist Edil Baisalov, center, marching at a rally in defense of freedom of speech in Bishkek, Kyrgyzstan, on March 18, 2017. (Photo: Danil Usmanov)

Hundreds of people went onto the streets of Kyrgyzstan’s capital over the weekend to demonstrate in support of free speech — only for many of them to be detained by police.

The rally in the center of Bishkek on March 18 was prompted by a wave of libel lawsuits filed on behalf of President Almazbek Atambayev that media rights advocates say are intended to crush independent reporting.

Among those participating were numerous journalists, members of parliament, rights activists and regular members of the public. The MPs were from the opposition Ata-Meken party, whose leader Omurbek Tekebayev is in jail facing charges of corruption. Several of the lawsuits involve the reporting of unproven allegations made by Tekebayev.

One participant in the rally was Alexander Kim, who is facing investigation over alleged financial misdemeanors while he was in control of Kyrgyzstan’s largest newspaper, Vecherniy Bishkek. The newspaper was wrested from his control by court ruling in 2015 and has since tacked to a fiercely pro-government and, accordingly, anti-opposition line. On the eve of  the rally, finance police turned up at Kim’s home to detain him, but were foiled when it was found they did not have a warrant.

While the rally began peacefully enough, it was quickly interrupted by police, who said they had a court order to bring the march to a halt. After that, police began detaining participants, including activists Mavlyan Askarbekov, Aibek Myrza and Azamat Attokurov. Ata-Meken MP Kanybek Imanaliyev was held briefly before being released.

Rally organizer and public activist Edil Baisalov confronted the police, stating that the mayor’s office had given its approval. City Hall confirmed this information.

Adil Turdukulov, a freedom of speech advocate, told EurasiaNet.org that the people detained during the march were sentenced to serve five days in jail.

On March 19, Turdukulov wrote on his Facebook account that the detainees were complaining of appalling conditions in custody.

“There are 22 people in a space of 15 square meters. There is one shared, outdoor bathroom for all of them. Many of the fellow prisoners are suffering from tuberculosis and are infested with lice. This is tantamount to torture,” he wrote.

Turdukulov said at the rally that the government’s actions were reminiscent of what happened in the days prior to the 2005 and 2010 revolutions, when the authorities began applying ever-increasing pressure to its opponents, including those in the media.

“Our authorities, starting with Atambayev, are provoking people to ever more protest. The more pressure they apply, the more people get indignant,” he said.

Atambayev, meanwhile, has accused the media of trying to sow instability and has called his detractors in the media “libelers” and “moral degenerates.”